On the anniversary of its release, we honor the monumental legacy of “Texas Chainsaw Massacre” by exploring the road to making a macabre masterpiece. 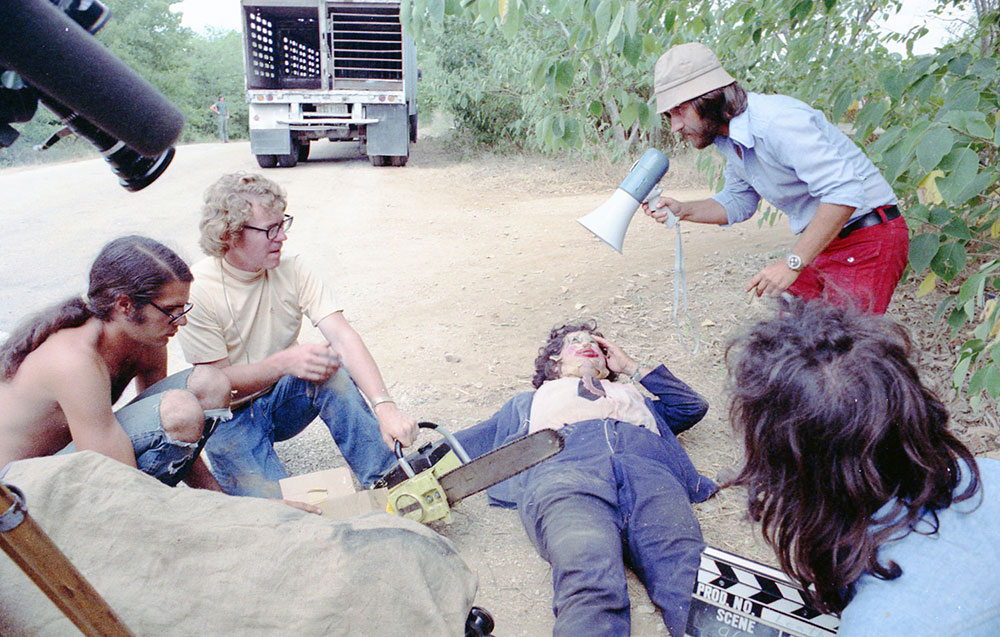 The Texas Chainsaw Massacre (TCM) is a grisly and unforgettable tale about a group of young people who run out of gas in the wrong place in rural Texas, where the locals consist of a cannibalistic clan of psycho killers. Released on this day (October 1st) in 1974, TCM shocked audiences with its chainsaw-wielding killer wearing a mask of human flesh. Banned in several countries upon its release, the slasher prototype eventually became a cornerstone of both pop culture and horror history.

As a child, filmmaker Tobe Hooper’s relatives from Wisconsin would visit and tell him a gruesome tale. One of those tales happened to be about a man who lived in a house with furniture upholstered from human skin. That man was infamous serial killer Ed Gein, and this real life madman helped inspire the fictional Leatherface.

Edward Gein was born in Wisconsin in 1906. After the death of his overbearing, Bible-thumping mother in 1945, Gein began grave robbing, engaging in necrophilia, and decorating his home with human remains. Oh, and murder was also high on his list of hobbies. Gein made an actual skin suit from his female victims. Besides TCM, Gein’s unbelievable story also inspired Psycho‘s Norman Bates and The Silence of the Lambs‘ Buffalo Bill.

This macabre tale etched itself into Hooper’s brain, but Gein was only one of the twisted threads that would give birth to one of the most iconic and influential horror films of all time. 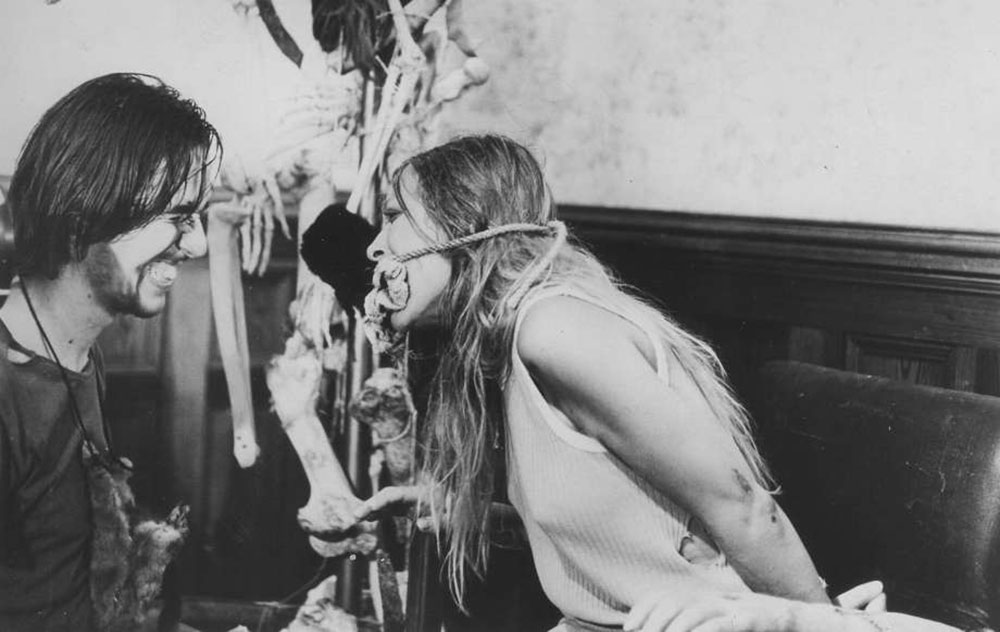 During the 1960s, Hooper worked as a college professor. Most of his experience with filmmaking came from working as a cameraman on documentaries. His directorial debut was a movie called Eggshells (1969), during which he worked with TCM co-creator Kim Henkel. Hooper wanted to make a horror movie where the monster was not a supernatural being but a human.

“I felt that the real monster was man, not fantasy. I know the film has this kind of Grimms’ fairy-tale archetype that runs through it, but the monster is a man. And you can relate to that more than a monster.”

Kim Henkel put it best when he said his goal in making the film was “…to scare the shit out of somebody.”

TCM was a departure from the supernatural horror and monster movies that preceded it. By the late 1960s and early 70s, horror was undergoing major changes. Interest in the Gothic horror from studios like Hammer Films was waning. The 70s was the decade of cutting-edge horror films like The Exorcist and Don’t Look Now. At the same time, outside of the genre, more creatively-driven, gritty films, like The Godfather and Taxi Driver, were scoring big at the box office.

Hooper took cues from earlier films that pushed boundaries, delivering a raw and stripped down horror film that terrified through its roots in reality and its almost documentary-like violence.

The monster in TCM wasn’t an immortal vampire cursed by bloodlust or a tormented soul forced to transform by the light of the full moon. TCM reinforced the idea that the monster could be a next door neighbor… or that innocent looking hitchhiker on the side of the road.

While both Gein and even the fairy tale Hansel and Gretel are credited with inspiring TCM, it was an innocuous trip to a department store during the Christmas season of 1972 that Hooper credited as a major creative spark for the story.

In an interview with Texas Monthly, Hooper explained:

“There were these big Christmas crowds, I was frustrated, and I found myself near a display rack of chain saws. I just kind of zoned in on it. I did a rack focus to the saws, and I thought, ‘I know a way I could get through this crowd really quickly.’ I went home, sat down, all the channels just tuned in, the zeitgeist blew through, and the whole damn story came to me in what seemed like about 30 seconds. The hitchhiker, the older brother at the gas station, the girl escaping twice, the dinner sequence, people out in the country out of gas.”

Hooper also stated he wanted to make a movie with an extremely dysfunctional family because, unfortunately, he knew people in real life that grew up in very dysfunctional families — and he understood the trauma that results from such a difficult upbringing.

There were many working titles for the film, from Headcheese to Leatherface. But when Hooper workshopped the title Texas Chainsaw Massacre, asking a friend for his opinion, the friend’s response sealed the deal. He responded that neither he nor his girlfriend would ever want to see a movie with a title like that. And that was all Hooper needed to hear to realize he was on to something.

In the summer of 1973, Hooper headed out into the scorching Texas heat, with a cast and crew of mostly film students and a tiny budget. 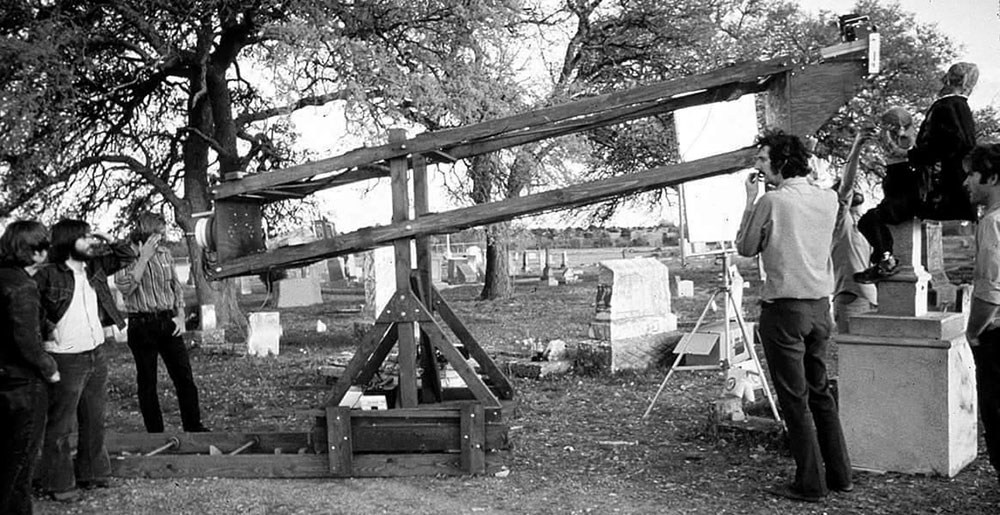 By all accounts, the production was not an easy one.

It was about a month long shoot consisting of of 16-hour days in extreme heat — 90 to 100 degrees every day. Apparently, the set actually was as gritty and gross in real life as it looked on-screen. Real animal parts were also used. So, in addition to baking in the heat, add the smell of rotting meat and perspiring actors whose costumes went unwashed daily. The budget didn’t allow much for wardrobe, so no one wanted to take a chance on having any of the wardrobe ruined or lost at the laundromat.

On top of the challenging shoot, members of the cast were genuinely frightened during some of their scenes.

The actors weren’t allowed to see Gunnar Hansen as Leatherface before meeting the iconic slasher in the scene, and his appearance was quite shocking and terrifying. Actor Allen Danziger actually screamed and ran off the set when she first saw him. One of the members of the crew, the sound recorder, said his daughter — about three or four years old at the time —  ran screaming from the set after walking in on a scene with Leatherface about to decapitate a victim.

An interesting fun fact: that University of Texas film student was Ted Nicolau, co-writer and director of the cult vampire series, Subspecies. (If you don’t know the Subspecies series, I highly recommend you check out these excellent vampire films.) Nicolau’s van was also the one that Sally Hardesty, along with her lovable brother Franklin and friends are riding around in.

Now let’s talk about the undeniable centerpiece of the film, Leatherface himself. 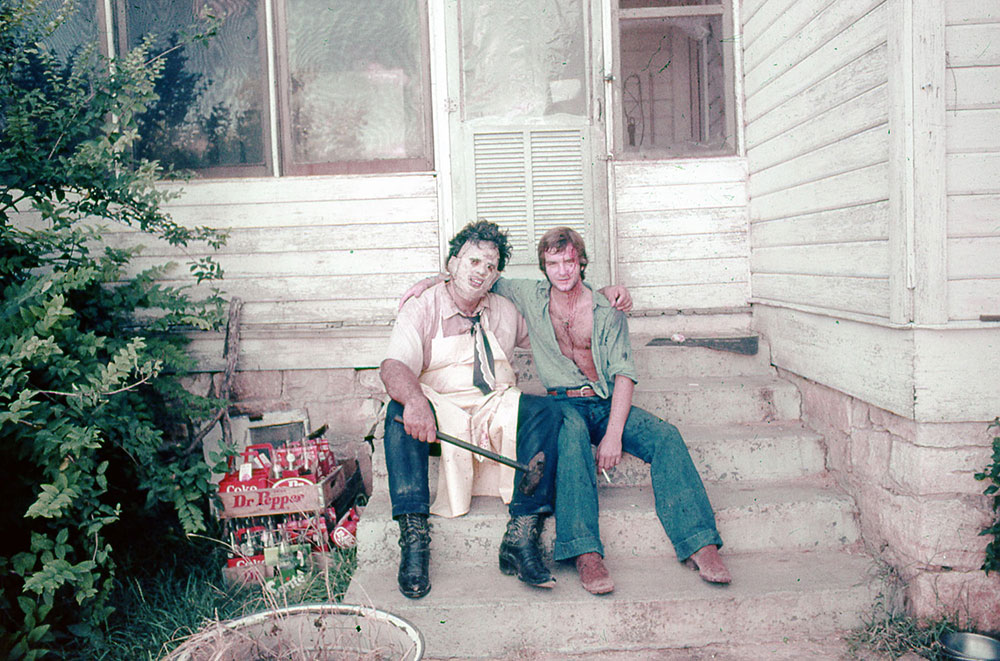 Gunnar Hansen wasn’t originally cast as Leatherface. At the time, Hansen was a grad student in Austin (also at University of Texas). Someone told him about the movie, thinking the imposing Hansen would be perfect as the killer. However, that the role was already cast. Obviously, the original actor didn’t work out. Strangely, he actually holed himself up in a motel room, got drunk, and refused to come out. The actor said that there was too much bad karma surrounding the movie and quit.

When Hansen’s friend called him up with the news, Hansen contacted Bob Burns, the art director for TCM, and told him that he was interested in the part. When Hooper got an eyeful of the 6’4,” 300 lb. Hansen, he cast him right away. Hansen decided to get into character as Leatherface by visiting the Austin State School for mentally disabled people and observed their behavior. His goal was to walk around the grounds to see if he could blend in with the students.

Another interesting Leatherface fact: He changes masks according to his mood and the scene. When preparing dinner, he wears an apron and a matronly “grandma” face; sitting at the dinner table, he wears a fancier “pretty woman” mask complete with make-up.

Marilyn Burns, who played Sally Hardesty, suffered just as much in real life as her character did on-screen. 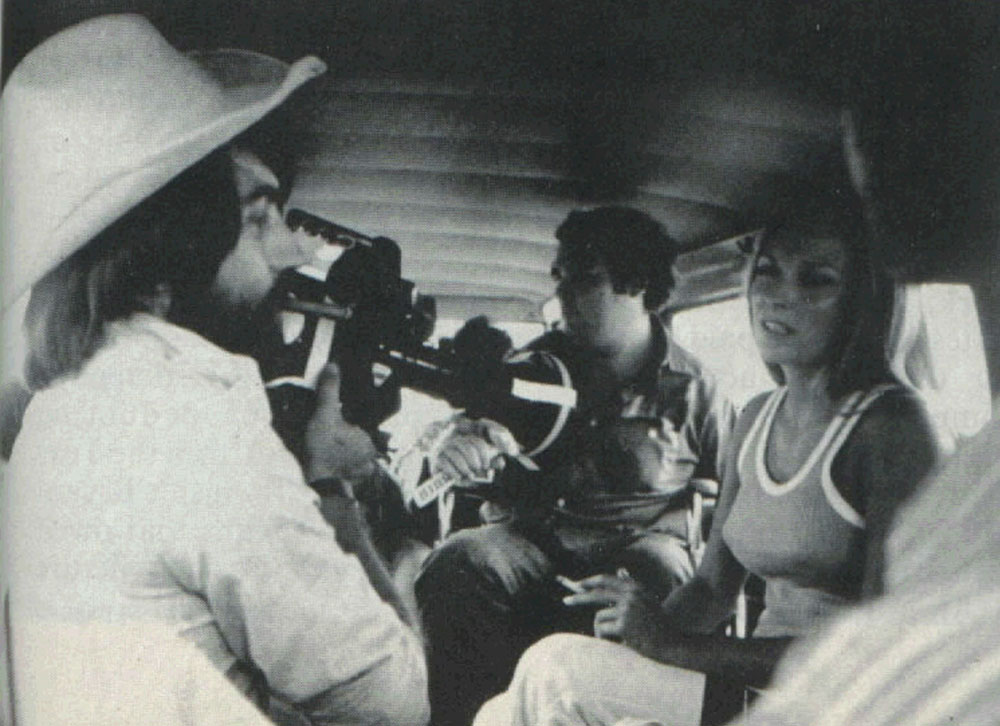 Talk about suffering for one’s art, Burns got beat up in one scene by co-star Jim Siedow. In the scene, Siedow forces Burns into a sack and starts hitting her with a stick. Hooper didn’t want a fake stick used. She also injured her ankle after ju