Five On It: Grim Gamble

Horror films can be a real adrenaline rush, triggering our fight or flight response. It’s similar to the thrill many people get when gambling; the risk — and potential reward — involved can get your heart racing and your blood pumping. This may be why horror films sometimes incorporate gambling and casino elements into the action, and it can often be a high-stakes marriage made in heaven.

These five films involving characters who test their luck in more ways than one are great to watch if you’re a fan of horror and gambling. They are guaranteed to give you that shot of adrenaline you crave. And after watching, you can head to casino Paysafecard where you can try your own hand at winning big.

As is probably obvious by the title, this movie centers around a group of “lucky” individuals that have inherited an old casino, which so happens to be haunted by the ghost of a famous mobster nicknamed “The Word”. The movie’s plot is straightforward and has our protagonists playing various casino games to save their souls. The stakes could not be higher, but the film puts an amusing twist on the mobsters — making them more humorous than frightening.

In fairness, this film (also released as Dead Man’s Hand) does not boast an impressive budget. So you have to be game for a low-budget affair from cult director Charles Band. If you’re familiar with Band’s work, a man famous for his ability to balance the gruesome with tongue-in-cheek humor, you probably have a good idea what to expect with this one.

Though it’s far from high-brow horror, it does feature horror icons Sid Haig and Michael Berryman. And that alone may be reason enough to try your luck with this one. Watch it for free on Tubi. 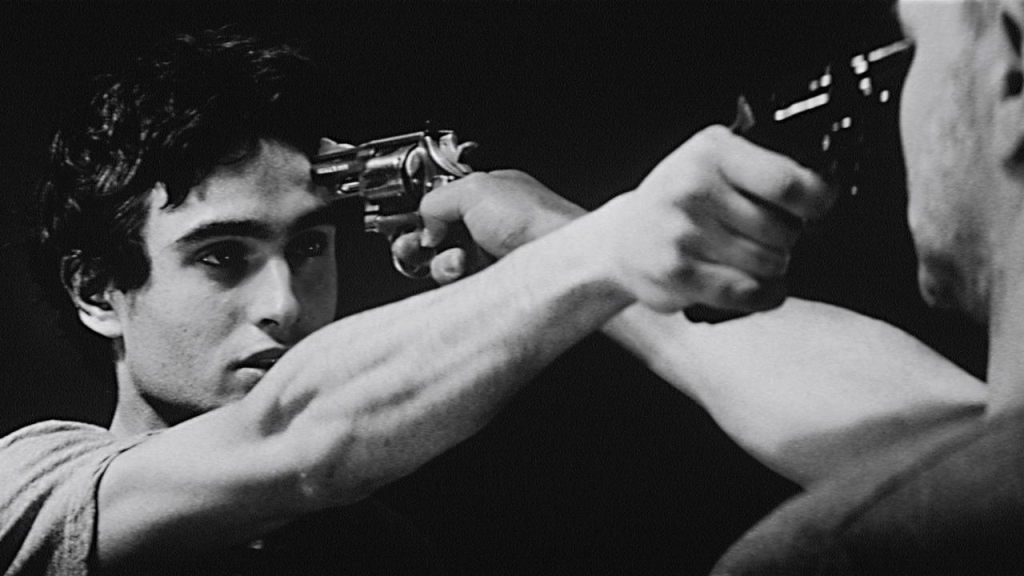 The French-Georgian movie was positively received by movie critics and tackled the infamous game of Russian Roulette. Tzameti just so happens to mean thirteen in Georgian, an unlucky number.  In the film, we follow our main protagonist, Sebastien, as he tries to make an honest living in France by working in construction. Unfortunately, he quickly becomes strapped for cash. And when he is presented with a mysterious and dangerous job, he immediately accepts. He receives an envelope that promises to reward him with riches, and he embarks on a journey to an isolated cabin.

Meanwhile, a criminal organization is setting up a deadly game of Russian Roulette. Players, including Sebastien, receive a gun loaded with one bullet that they need to use on the other participants. Wealthy spectators place bets on who will continue to the next round. The guns inevitably get loaded with more and more bullets. 13 Tzameti was rewarded with prizes at Sundance and Venice Movie festivals in 2006.

The movie was so successful that an English remake was soon in the works, simply titled 13. The remake featured movie stars like Jason Statham and Mickey Rourke. But in my opinion, it did not hold a candle to the gritty Georgian original. Watch it online here. 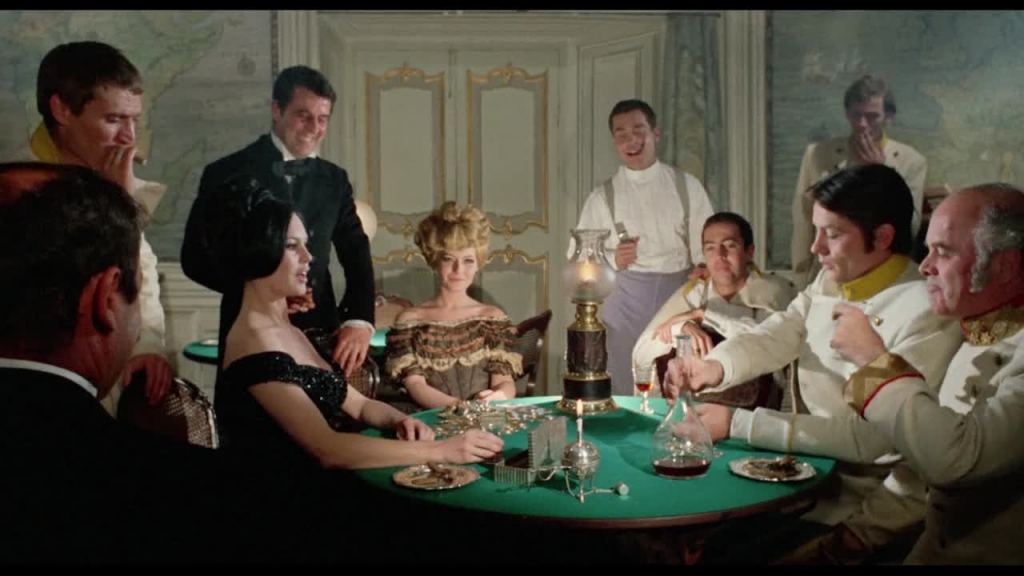 This genre classic was released in 1968, and it is the most star-studded movie on our list, with appearances from legends Jane Fonda, Brigitte Bardot, and Alain Delon. It tackles three horror tales by Edgar Allan Poe, with each adventure having a different European director: Roger Vadim, Louis Malle, and Federico Fellini. The English title Spirits of the Dead is from an 1827 poem by Poe. And the English language version of the film features narration from none other than Vincent Price.

The first story, known as the Metzengerstein segment, stars Jane Fonda as Countess Frederique. At the age of 22, Frederique inherits the Metzengerstein estate and lives a life of promiscuity and debauchery. She falls for a man who is her cousin (unbeknownst to her), but his rejection of her for her wicked wades infuriates her — setting off a tragic chain of events.

The second “William Wilson” segment is the one that revolves around gambling. It follows an Austrian soldier named William Wilson (Alain Delon) living in 1800s Italy. After confessing to a priest that he has committed murder and lived a wicked life, he joins an all-night card game against his courtesan (Brigitte Bardot) and his doppelgänger, also named William Wilson. It’s an exciting, high-stakes scene that culminates in a dramatic and thrilling way. Frederico Fellini’s directorial talent has caused the part to receive critical acclaim.

The third segment, titled “Toby Dammit”, is about a former Shakespearan actor (Terence Stamp) who is losing his acting career due to alcoholism. While working on a new film in Rome, he begins to have frightening visions and appears to be slowly losing his mind. This dark and twisted segment features the music of Ray Charles and Nino Rota.

You can currently watch this cinematic treasure on The Criterion Channel streaming network. 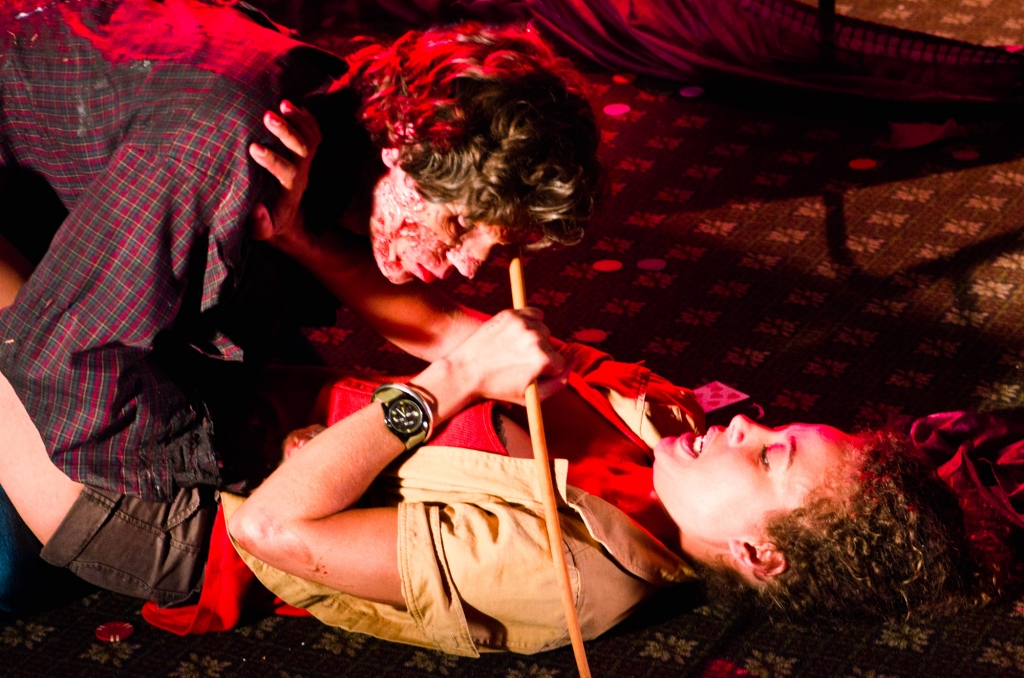 If you are a fan of the zombie horror genre, you need to check out Remains. This post-apocalyptic horror film was released in 2011 and follows several casino employees trying to stay alive after a nuke explosion that turns the rest of humanity into flesh-eating zombies. They manage to barricade themselves in Reno Casino and struggle to keep the zombies at bay.

It was produced by the Chiller Network and is based on the comic book series of the same name. While it’s not a film with much substance, there’s plenty of fast-paced action, bloody kills, humor, and sex appeal to make for a fun popcorn flick. It’s a great option if you want to check your brain at the door and enjoy some mindless, end-of-the-world mayhem.

Watch it for free on Tubi.

The wildly popular Leprechaun series has given fans eight different movies since the early ’90s. The third installment in the series has a heavy gambling theme. Warwick Davis once again plays the wicked Leprechaun looking for his pot of gold. The action takes place in Las Vegas, the gambling capital of the world, and has our spooky Irish goblin casually playing craps.

The film begins with the Leprechaun, having been changed into a statue by a magical medallion, being sold to a Las Vegas pawn shop. Assuming his original form when the clerk removes the medallion, the Leprechaun kills him and goes on a rampage through a Las Vegas casino in search of one of his wish granting coins.

Objectively, the film is far from great. It currently holds a hilarious 0% on Rotten Tomatoes. But it’s got plenty of campy charm to make it pretty damn funny and entertaining, which is a huge reason it’s a fan favorite in the franchise. In fact, it became the highest-grossing direct-to-video film of 1995. Additionally, star Warwick Davis has cited this as his favorite film of the series because he liked the humour in it. Despite its very low budget, there’s a lot to love here — and setting the film in Vegas was a stroke of genius.

Rent it on VOD from a variety of platforms.