The gambling industry is growing at an accelerated pace. So, while the classics developed in the early days of the industry remain relevant today, more modern and innovative slots are becoming more popular among fans of online casino games. Creators are inspired by elements of widespread culture — famous movies, computer games, anime, or music. In addition to thematic features, popular slots at top casinos feature high-quality graphics, user-friendly functionality, and a customer-centric bonus policy.

Horror slots are some of the most popular slot games in online casinos, and we’re sharing four of the best that are guaranteed to give you plenty of chills and thrills.

If you’re looking for a great site to test your luck and learn more about how to maximize your chances for success, check the best Irish betting sites. 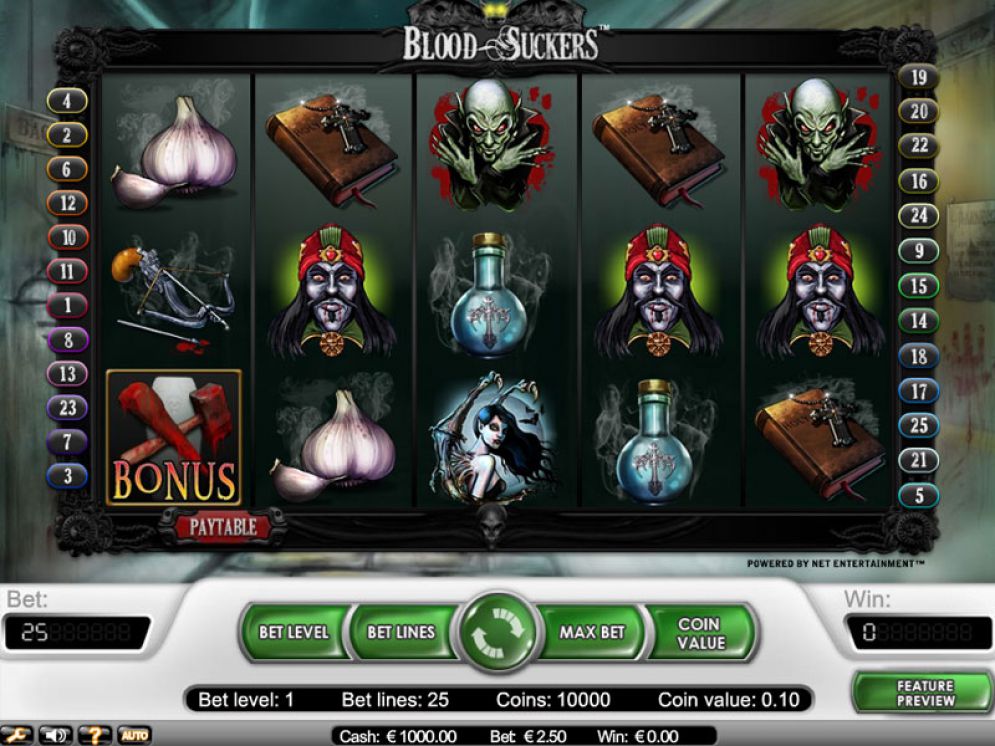 The first noteworthy element of the game is that, while it is fully compliant with the latest industry demands, including quality graphics, Blood Suckers by NetEnt was launched more than seven years ago. And it remains one of the most popular horror slots years later. The popularity of the game is due in part to its dark horror atmosphere and great storyline; it spins an eerie tale of bloodthirsty vampires.

When you begin gameplay, you’ll find yourself in a frightening crypt. Details of the background design of the game work very well, including cobwebs, dust, and splashes of blood. All this adds to the wonderfully spooky atmosphere.

The developer made sure the control panel is both functional and simple at the same time. The gameplay is very straightforward, using the standard layout of 5×3 reels. Each rotation, the user gets 15 reels, consisting of five vertical columns and three horizontal rows. The game boasts an RTP (Return to Player) of 98%. Compared to other projects in this category, the figure can be considered high, which is one of the main advantages of the game besides its creepy aesthetic.

2. Vampires vs Wolves by Pragmatic Play 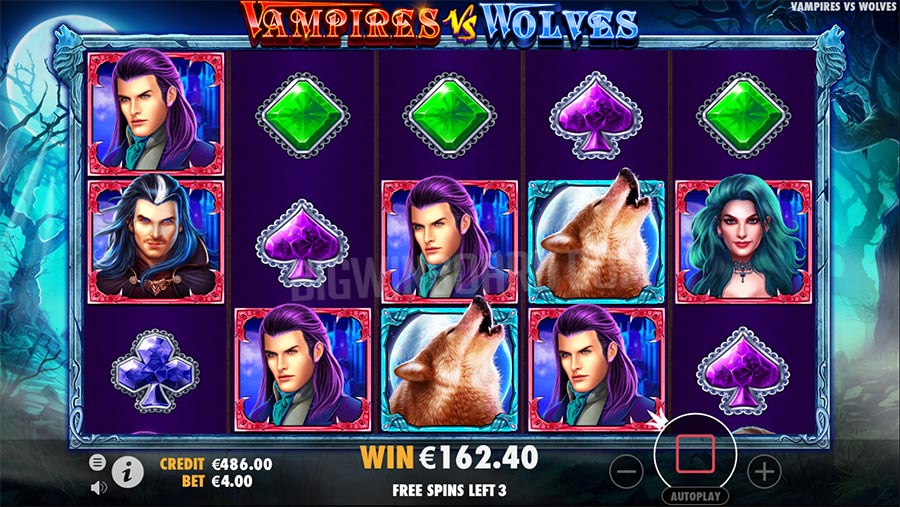 This game is similar to Blood Suckers, but the emphasis is on the confrontation between two of the greatest horror monsters of all time: vampires and werewolves. With a setting that feels like Victorian London on a dark and misty night, this is another game that shines when it comes to atmosphere. The gameplay is enhanced by a pleasing color palette and great visuals, as well as a stellar and spooky soundtrack. The developer really delivers when it comes to the details.

All the focus is on the free spins game where you’ll be forced to make a decision: fight alongside the vampires or join the werewolves, depending on whether you prefer to play it safe or take some big risks. Ironically, the wolves are a little less wild in this game. So, if you’re up for more volatile gameplay, join those beautiful gothic-inspired vampires.

The game uses a stripped-down version of the control panel, with only the most essential options displayed. As for the mechanics, they are essentially identical to Blood Suckers with the same 5×3 reel layout. However, the RTP is lower, at only 96.49%. 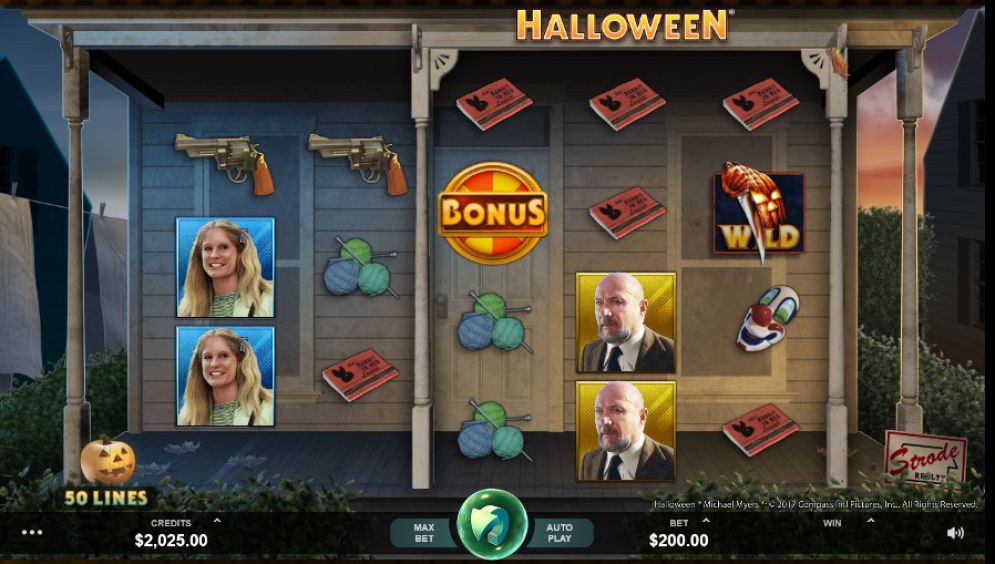 Microgaming’s Halloween is based on the 1978 cult horror film. Fans of the Carpenter classic can rejoice because the studio set out to recreate the spirit of the beloved film as much as possible.

There’s a gritty feel to the visuals, and the soundtrack is genuinely creepy…exactly what you’d expect and hope for from a game inspired by Halloween. It’s surprisingly creepy, too, and a real treat for horror fans. Not only does the game deliver in spades when it comes to honoring the atmosphere, visuals, and sounds of the film, but it also packs a punch with killer extras. The popular TRICK OR TREAT WHEEL BONUS FEATURE awards cash prizes or triggers either a Boogeyman Bonus or Free Spins.

This 5 reel, 50 payline game does follow the standard 5×3 reel layout. However, very little else about the game feels standard. The appearance of the playing field is constantly changing thanks to the wandering area, which gives the appearance of a doorway into which someone is trying to peek. The infamous Myers house is the game’s background, and reels feature the characters of the film, including Linda, Annie, Loomis, and Laurie. A special symbol is, of course, a pumpkin, and other character symbols include a knife, a gun, a knitting spool and needle, a phone, a mask, and matches.

Halloween also has the most accessible control panel. There are only a few basic buttons and two boards — with the winnings and the bet amount. The only downside is that the game’s RP is 96.2%, the lowest of our four featured games. 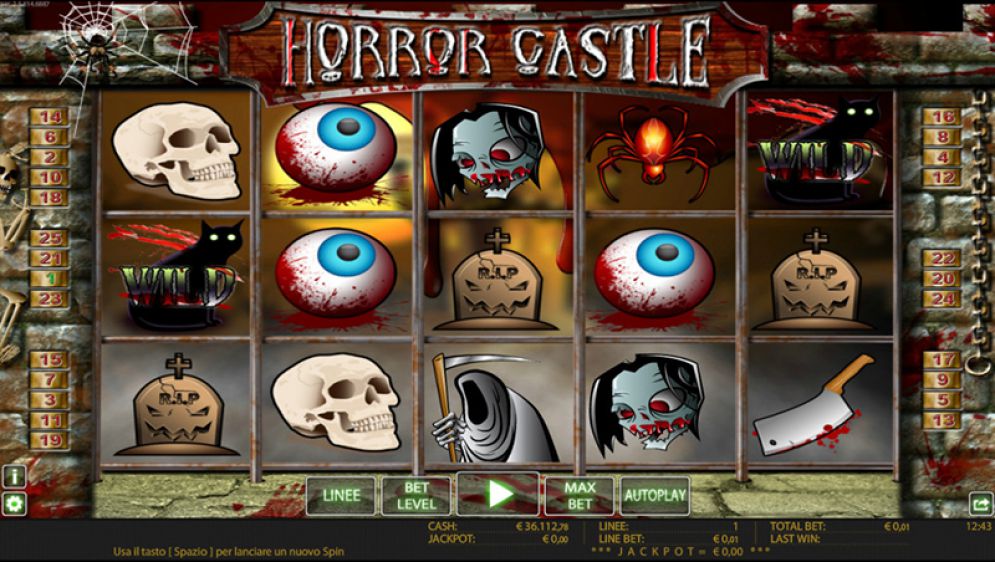 Dare to enter the Horror Castle. Behind its high walls lives the most terrible monsters known to man. Among them are Frankenstein, Dracula, and Death himself with an awful scythe. But trust me, in their company, you will have a lot of fun because this game offers exciting gameplay features, excellent graphics, and high-resolution images.

A chilling game for experienced players who crave extra thrills. Reels are placed against a brick wall where you can see skeletons, chains, and blood. A spider crawls up and down the left side of the reels. Various horror symbols are integrated into this game, including coffins, spiders, skulls, tombstones, zombies, and bloody eyeballs. Eerie organ music accompanies your gameplay, creating a gloomy and frightening atmosphere.

There are five reels and twenty-five lines in the Horror Castle slot machine, and the pictures on the screen are arranged in three rows. You can use one, five, ten, fifteen, or twenty-five strips, and you can play between one cent and twenty-five dollars. Special symbols with enhanced features are available, along with free spins and doubled multipliers. Emphasis on crucial keys is made using great color design.

Horror Castle‘s RTP  is 97.76%, putting it just below Blood Suckers on this list.