In Rich Ragsdale’s new horror film Ghost House, a young couple, lost in the Thai countryside, find themselves haunted by an evil spirit. Desperate for a solution, the couple spirals deeper into a surreal supernatural world leading them into a frenzied, terrifying confrontation with pure evil. Since I enjoyed the movie, I was thrilled to get a chance to talk with Director Rich Ragsdale. 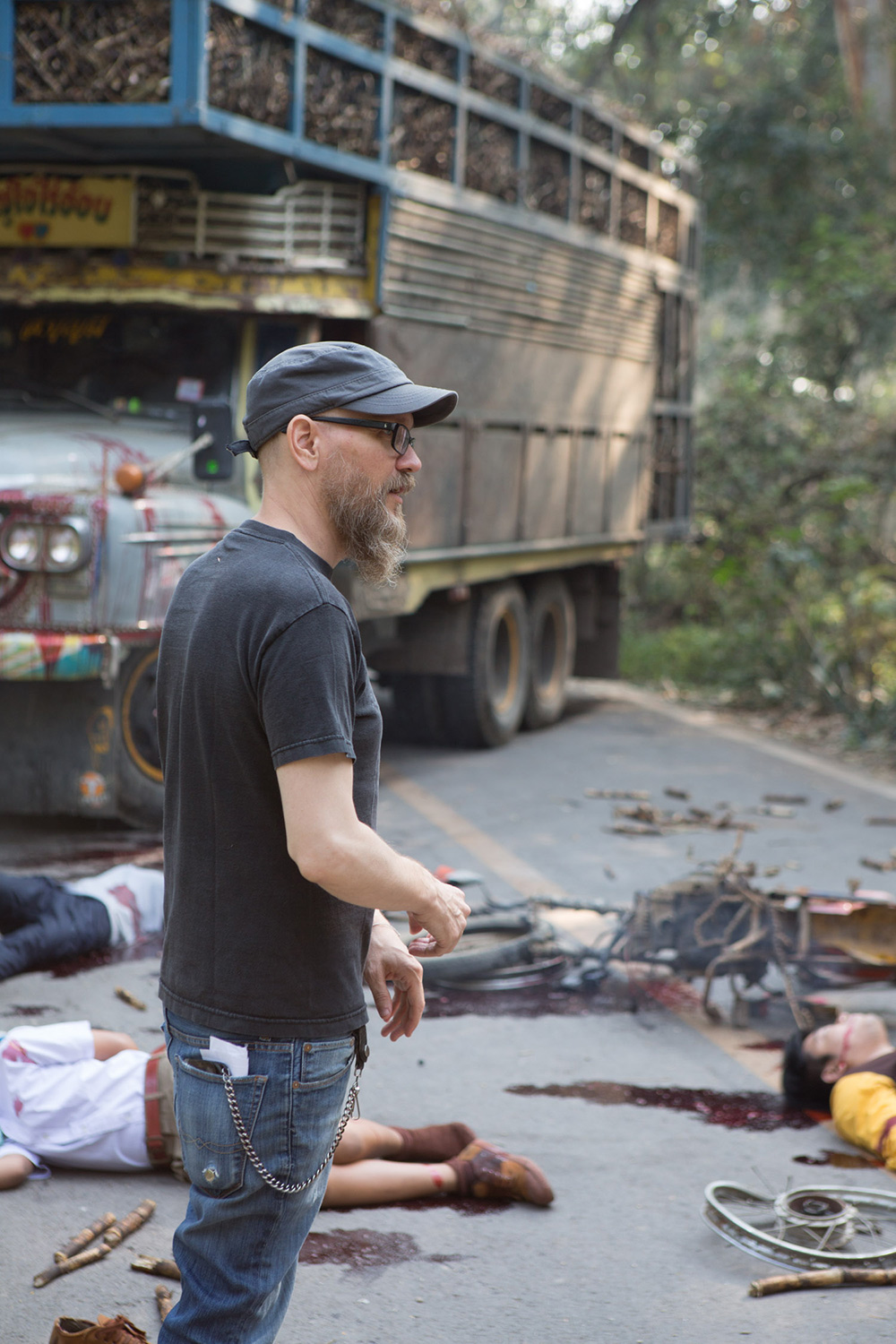 Director Rich Ragsdale on the set of Ghost House

Los Angeles Zombie Girl: Rich, thanks for talking to me. Looking through your credits, I see films from all genres. Is horror your favorite?

Rich Ragsdale: “I love films in most every genre, so I dunno if I’d say horror is my favorite. I do tend to gravitate to darker material and movies with interesting visuals, and horror movies typically satisfy that impulse.”

LAZG: What made you start working in film?

RR: “In the beginning of my career I was working as a film composer, mostly scoring for TV and video games. I began experimenting with photography and filmmaking on the side as a hobby. An experimental film I made went on to win several awards and screen in a lot of festivals, so I decided to give filmmaking a shot.” 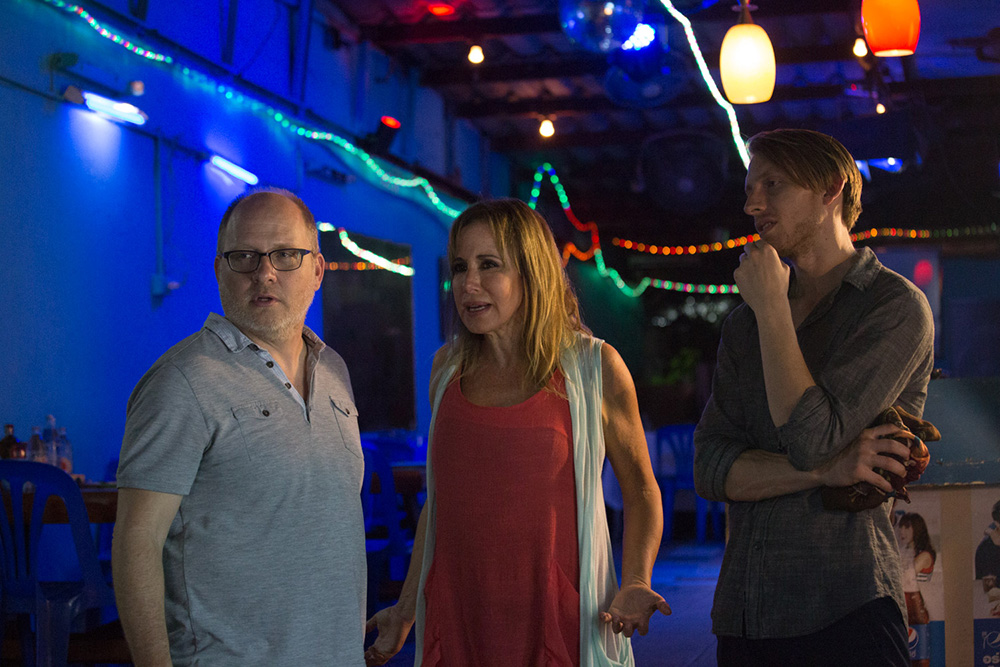 Producer-writer Kevin Ragsdale on the set of Ghost House

LAZG: What made you do a film about Ghost Houses or Spirit Houses? Did you run across any on a vacation?

RR: “My brother Kevin (the producer of Ghost House) married a Thai woman. After their son was born, we traveled over to Thailand to meet her extended family. I brought my girlfriend with me. She was having a hard time with jet lag, so I took her for a walk through the surrounding jungle to get her on schedule. We stumbled across a clearing where the locals had discarded their old ghost houses. There were probably close to a hundred of them littered about. We started taking pictures of them, looking inside and poking around when it occurred to us that this might be a bad idea… but maybe a good idea for a movie.”

LAZG: What kind of research did you do before this movie?

RR: “Kevin has a large extended family on his wife’s side. They were an invaluable resource. Also, we researched extensively using the internet, watched Thai films, picked up a bunch of Thai horror comics, etc. A number of set pieces in the film are based on our travels in Thailand. Even the character of Gogo was based on (and named after) a driver we used in Thailand.”

LAZG: You show tourists as people who blunder through another country’s culture, causing damage as they go. Is this an observation of yours or you just using a horror trope?

RR: “Having spent a good deal of time in SE Asia, you begin to develop a sensitivity to other tourists’ behavior. They can be quite obnoxious and disrespectful. It’s not always their fault as they aren’t familiar with the culture and protocols, but it can still be excruciating to observe. That’s really the message in Ghost House – be respectful… or else. Of course, as you mentioned, this is also a convention of the genre, but there is truth in it.”

LAZG: Why did you choose Thailand?

RR: “We have spent a lot of time there and love the country and its culture. On a logistical level, it is THE production hub for SE Asia so there are great crews and gear available in Bangkok. On an aesthetic level, it’s gorgeous and textured. We chose to shoot anamorphic to maximize the cinematic potential if the landscape. Also the dollar goes very far there, which allowed us to get much more movie for our budget than we ever could shooting in the States.”

RR: “In a word, amazing. Great crews, great food, lots of friendly, smart, and talented people. It was a hugely ambitious shoot for the budget, so it was a very difficult shoot, but it was a real adventure too.”

LAZG: I see a lot of similarities to the movie Drag Me to Hell. Was that on purpose? Are you a fan of Sam Raimi?

RR: “I do love Rami. He’s a master. We weren’t intentionally trying to mimic Drag Me to Hell, but his influence is hard to shake, so I guess it’s no surprise that it bleeds through.”

LAZG: Ghost House is a great looking film with lots of atmosphere. Did you have a big or small budget and how did you raise the money?

RR: “We had a very low budget mostly raised from individual investors and different production services. We made a number of choices in the early stages that helped us maximize our scope and production values. One was to only shoot on location, no stages. This makes things very difficult as the company moves almost every day. It’s very taxing on the cast and crew, but gives you so much more realism and scale. Of course, it’s also a lot of pressure as it eliminates any opportunity for reshoots as once you are done with a space there is no returning to it later. So, there is enormous pressure to make your day every single day. There are some things we had to compromise to get the film in the can, but in the end, I think it was worth it.”

LAZG: How did you decide what the Watabes would look like? Was everything practical effects?

RR: “Low budget cg is almost always awful, so we decided up front to do our effects almost entirely practical. There are some digital tweaks here and there, mostly clean ups and some composite work, but it’s probably 95% practical.

When it came time to create the look of our ghost, I drew some initial concept art that was pretty exaggerated and handed it off to the amazingly talented make FX artist Vincent Van Dyke, who turned it into a very convincing and terrifying make up. We even built a life sized prosthetic puppet head so we could manipulate Watabe’s mouth in a way that isn’t humanly possible.” 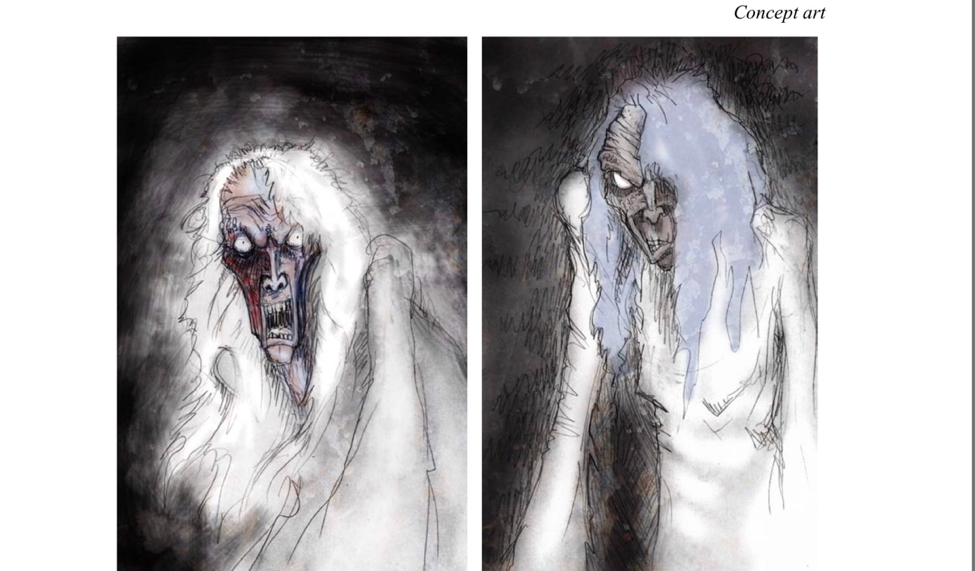 LAZG: How did you put together the cast? Scout Taylor Compton was really great!

RR: “We had a cast wish list and Scout was at the top for the role of Julie. Our casting director knows Scout personally and called her in on day one. I think we might have met with another actress or two, but Scout was always our first choice. She’s so good, there really weren’t any serious contenders.”

LAZG: What else can you tell me about the filming of the movie? What were your inspirations? Favorite parts? Challenges?

RR: “We drew inspiration from the classic horror filmmakers we grew up watching, John Carpenter, Sam Rami, etc. You can see it in the way we used vintage 80s lenses, practical effects, and analog synth elements in the score. The lighting and use of music in the Reno bar scene was meant as a nod to 80s era David Lynch. We wear our influences on our sleeve, but we just wanted to make a fun, exciting horror flick that would recall the feeling of the VHS era without being self-consciously retro.”

“It was very hard to shoot Ghost House, but it was super rewarding. The conventional wisdom when shooting a low budget horror film is to find a cabin in the woods and shoot everything in one location. Instead we chose to fly half way around the planet and shoot a movie with dozens of locations. But go big or go home, I guess. It seems to have worked out well. The movie has had a wide theatrical release throughout all of Asia, beating out a number of big Hollywood productions in the box office. That is very gratifying. We hope the success continues here in the States – we certainly appreciate all the support we’ve gotten thus far.”