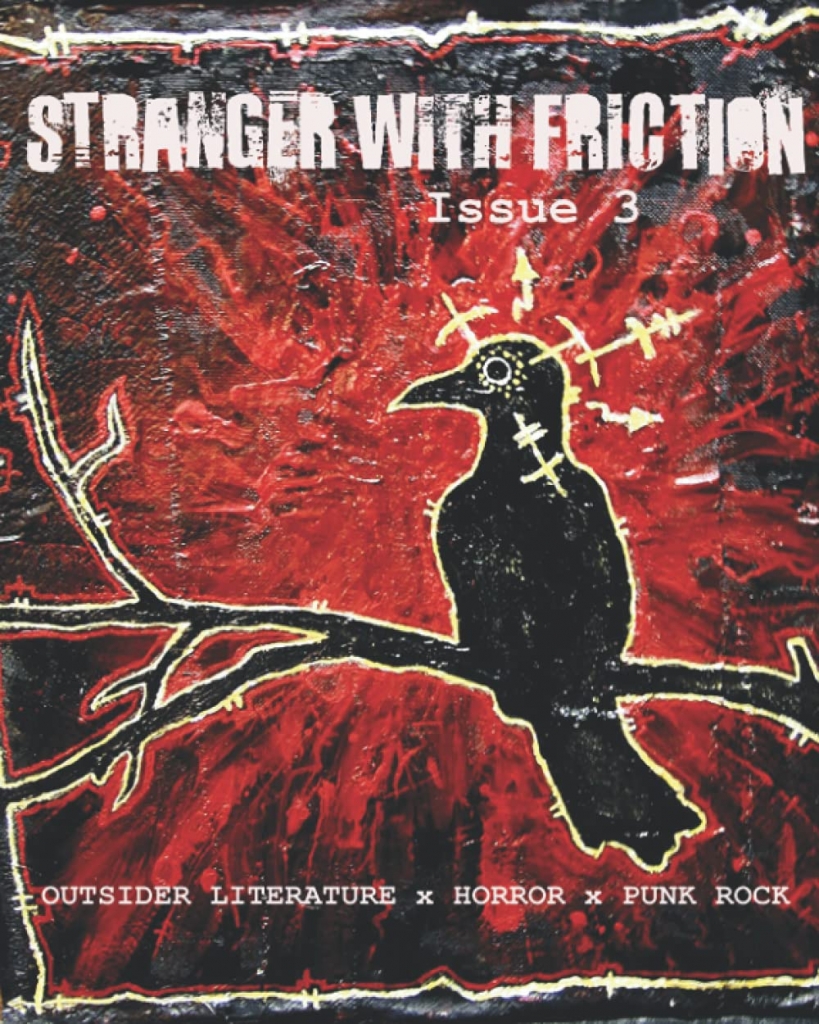 Well…hot damn. What in the holy hell did I just read?

To be perfectly honest, I had no idea what to expect going into Issue 3 of Stranger With Friction, as I have not perused the first two volumes. But I was in the market for something different, and a friend recommended that I give SWF:3 a shot.

And now that I’ve finished it, I can say with conviction that Tim Murr and company have more than delivered on the “something different” premise.

While I have certainly devoured my fair share of established & mainstream author’s books over the years, I still (then and now) held a quiet admiration for the lesser-known writers. For the scrappy underdogs. Those starving artists fighting an uphill battle, hoping that their candle flames of indie creation will stand out against the shining brilliance of fiction’s existing luminaries.

Needless to say, those scrappy underdogs are well represented here. But before I get into the review itself, I want to address a few things.

First, just what is Stranger With Friction?

Well, it’s an independent magazine dedicated to lesser-known and fringe creators, edited by Mr. Tim Murr. However, unlike other horror compilation releases of its ilk, SWF:3 isn’t just short stories and one-offs. Within its pages, you will also find music reviews, interviews with people within the entertainment biz, general discussions on various topics (generally horror related), and more.

It’s not quite like how everyone else does it. It’s legitimately the punk rock mentality in literary form.

Do it how you want.

And you know what? I have mad respect for that approach. Props, Tim & co. Props.

Second, as with all my reviews, I will keep spoilers to a minimum. This is as much due to it being my preferred approach as it is out of respect for the individual author’s creations.

One of those offerings is a review of John Carpenter’s synthesizer score for the original Halloween.

Another is a love letter to kaiju in cinema.

Just like none of the fiction stories are quite alike, no two articles are in the same vein either.

The non-literature segments are equal parts enjoyable and informative, which I can appreciate. I truly enjoy getting “behind the scenes” knowledge of movies or music. The fact that the authors truly enjoy the topics they are writing about helps to elevate the works above mere fluff pieces.

As for the short stories (the primary focus of my review), they vary in quality, though none are terrible.

Several short stories stand out above the rest, however, and I’ll give each of those a bit of time in the spotlight.

First up is Penitent by John Baltisberger, a splatterpunk doozy with a delightfully twisted antagonist. Set in an undisclosed time in America’s future, Penitent has the feel of a horror-tinged Shadowrun session. But gore is just as much in play as technology in this story. As a fan of the cyberpunk genre, I could appreciate this brutal tale of machinery gone amok.

The next standout is Recess by Carter Johnson. A more subtle and intimate story than Penitent, it is also amazingly self-contained considering how small the story is. This one is a straight-up creature feature, albeit one told from the perspective of fifth graders. It is well-written, and also ends with a little bit of gallows humor, which was thoroughly enjoyable.

The third standout is Sin Raffle by Thomas R. Clark. While a little more scattershot than Recess, Sin Raffle brings some truly twisted ideas to the table. It’s got a slight The Purge vibe going on, but Mr. Clark heads in a noticeably different direction. And he doesn’t skimp on the violence either. It is easily the most vicious tale in the book, worthy of splatter-masters Jack Ketchum, Richard Laymon, and Edward Lee. 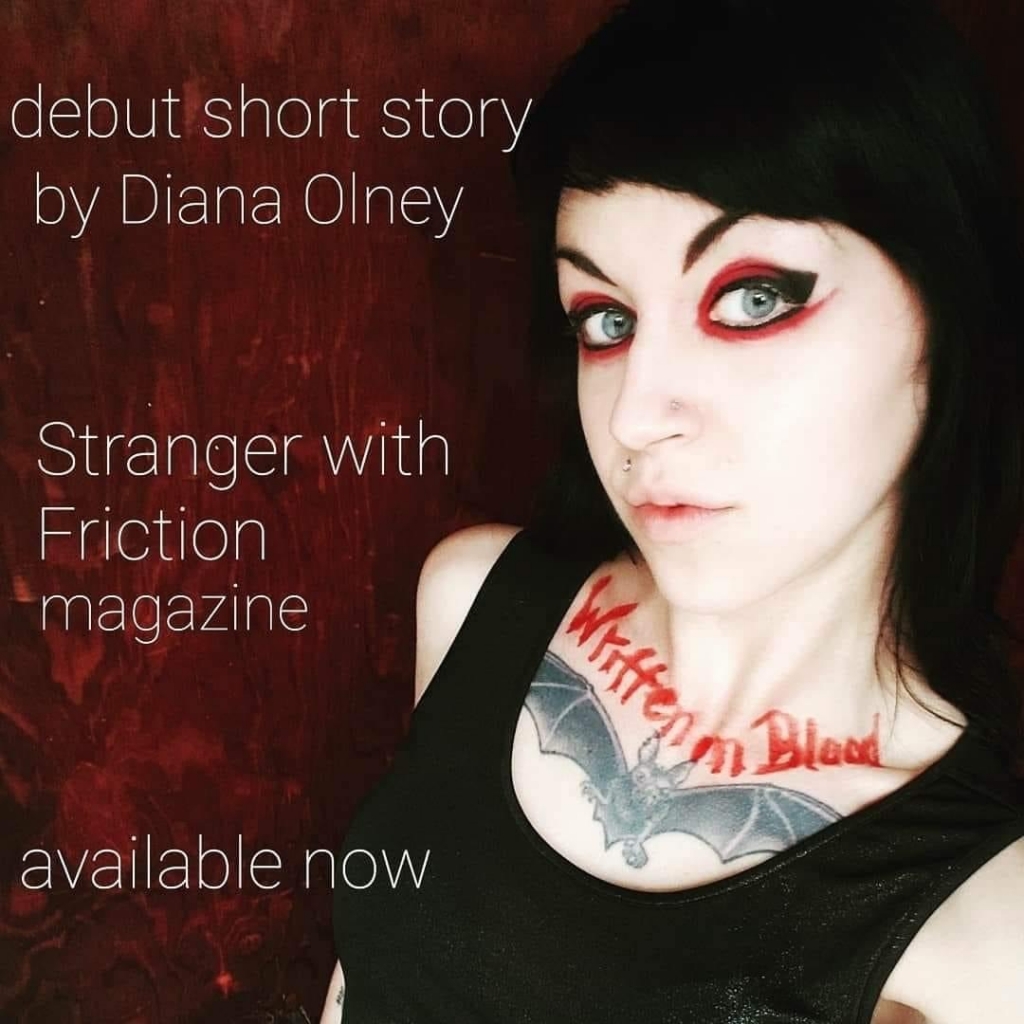 Last of the standouts, but most certainly not least, is Written In Blood by Diana Olney.

The old adage “save the best for last” truly comes into play here, as Mrs. Olney’s offering is easily the greatest of the bunch — which is even more incredible when one takes into account that other authors in this collection have already released multiple novels, while Diana is still an up-and-coming author working on her first book.

Written In Blood is a solid little supernatural thriller, featuring a group of college girls out on the town, making the dubious decision to get matching tattoos based on strange symbols they don’t recognize. What happens afterward is equal parts horrifying and enjoyable. Mrs. Olney’s story is not only well-realized, but her writing is superb, full of wit and dreadful charm.

Despite my enjoyment, I did have a few nitpicks with Stranger With Friction, most of which fall into the realm of grammatical errors and literary fumbles.

Several stories feature jarring head-hops from one character to another. While slightly more forgivable within the context of a short story, where word count is at a premium, it’s still hard to reconcile when attempting to get lost in a narrative.

Unwieldy or confusing sentence structures cropped up occasionally, and the grammatical errors & odd spacing issues, while not prevalent, were still noticeable.

Only a couple of the stories (those from Carter Johnson and Diana Olney) were truly error-free. This had the unfortunate side-effect of making the errors in the other stories more glaring. I’m actually a bit of a snob when it comes to that stuff (I am what I am, sorry not sorry), so there was a big part of me that wanted to deduct a star because of them.

In the end, however, I brought that star back due to how impressed I am with this magazine. I don’t give out five-star reviews very often, but this “punk-rock” offering with its guerrilla approach struck a chord with me.

Reading these works in this particular format really reminded me of back when independent newspapers were all the rage, daring to run articles and op-ed pieces that the big powerhouse publishers wouldn’t touch.

Kind of like David vs. Goliath, only this David is tatted up, has hearing loss from concert amplifiers, and doesn’t give a fuck about establishments or expectations.

Overall Rating (Out of 5 Butterflies)
MORBID MINI
Admittedly, this will not be everyone’s cup of tea. As a compilation, it is, by nature, a mixed bag. Some of the offerings simply work better than others. But as a whole, Stranger With Friction: Issue 3 is never anything less than entertaining, ultimately becoming something greater than the sum of its parts. Looking for something different? Give this a read!