On the 26th anniversary of Vincent Price’s death, I recall the impact the icon had on cultivating my love for horror – and the film that started it all. 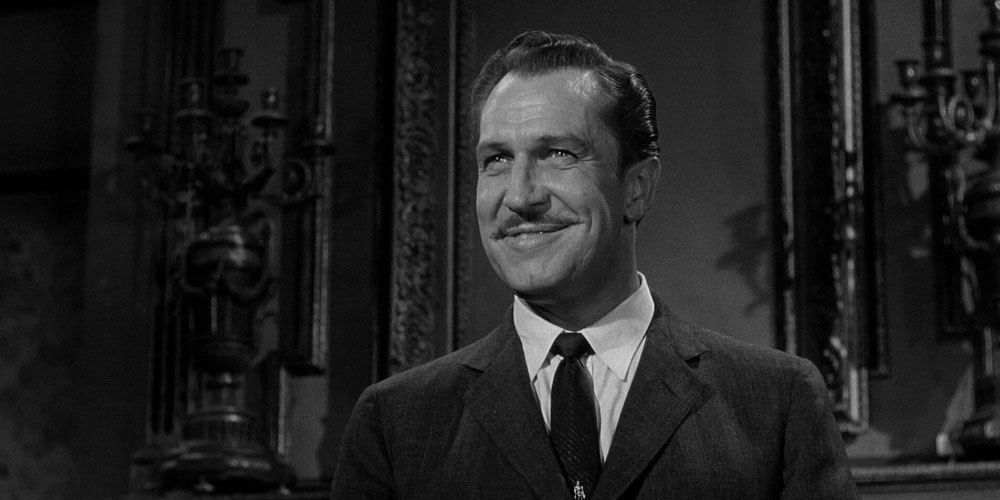 My earliest memory of horror — the singular moment that planted the seed that would grow into a lifelong obsession — came from an unlikely source: my grandmother.

At home, as far as I can remember, horror was a mainstay. My mom raised me with Hammer and Dark Shadows; my dad let me watch The Shining and Twin Peaks when I was definitely too young for both. My grandmother isn’t someone I associate with nurturing my love for the genre. As a kid, I spent most of my days during summer vacation at her house and we watched more daytime soaps than anything else. But on her VHS shelf, right next to Gone With the Wind, were two movies that I thought were wholly out of character for my grandmother to own.

One of them was What Ever Happened to Baby Jane? I remember my grandmother laughing every time Joan Crawford lifted the lid of her dinner tray to find a dead rat inside. It’s one of my favorite memories of her. 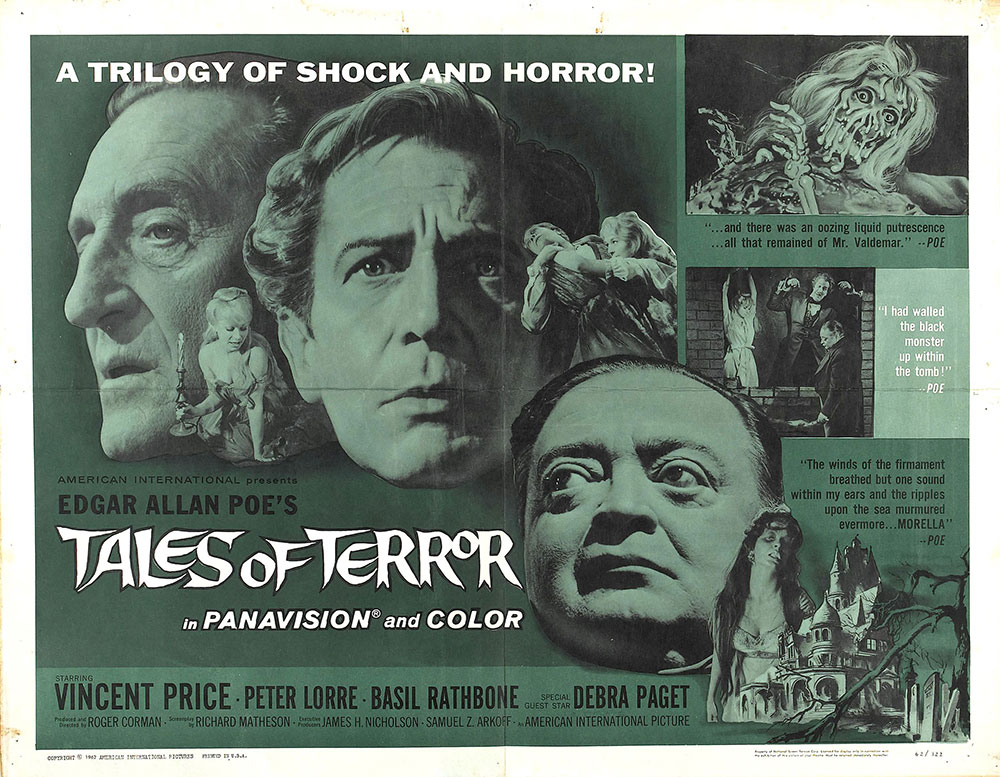 The other was Roger Corman’s Tales of Terror, a trilogy of stories loosely based on works by Edgar Allan Poe, each one starring Vincent Price.

I don’t know how or why my grandmother came to own a movie that would have been much more at home in my mom’s collection, but after I popped it into the VCR one otherwise uneventful summer afternoon, my life changed forever.

The first tale in the trilogy was “Morella,” a classic piece of Corman Gothic, while the second story, “The Black Cat,” was a black comedy co-starring Peter Lorre that is still one of the greatest twenty minutes ever committed to film.

But it was the third tale, “The Case of M. Valdemar,” that affected me the most.

Valdemar, Vincent Price’s character, is a dying man and he entrusts a hypnotist, Carmichael (played with sinister perfection by Basil Rathbone), to help ease his suffering. Carmichael puts Valdemar under his spell at the moment of death; his body dies, but his consciousness lives on, trapped in a horrible, unending purgatory.

As his body decays, Valdemar’s disembodied voice echoes through the halls of his home, wailing, begging for release. When Carmichael attacks his wife, Valdemar rises from his deathbed. He moves toward them slowly, silently, lifeless eyes gazing out from his pale face. Then, he starts to melt.

My seven-year-old self was terrified. I had never seen anything like it. It gave me nightmares; I was afraid to turn out the lights for fear I’d see Valdemar’s red-rimmed eyes and white face coming out of the shadows to devour me. 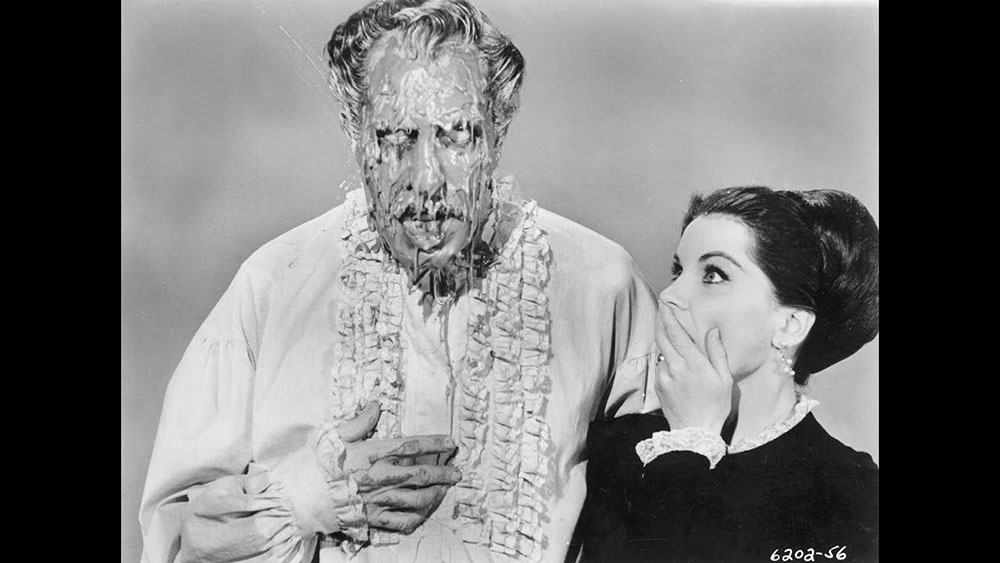 And I loved it.

I went back to my grandmother’s house day after day and watched Tales of Terror ad nauseum, shuddering with horror every time Valdemar opened his eyes and began to rise from his bed. I was hooked. Eventually the tape made its way home with me so I could watch it any time I wanted — which was pretty much all the time, until my next obsession came along.

Throughout the years, Valdemar — and Vincent Price — stayed with me. (I’m not sure if I knew at the time that he was the voice of Ratigan, but it’s worth noting that The Great Mouse Detective was one of my absolute favorite Disney films.)

As I got older, my love for horror expanded and my love for Price and his films grew. By my late teens, I was fully immersed in classic horror. I had my driver’s license, so I was making regular trips to the mall to visit Suncoast Video until they eventually went out of business. There I got my hands on tons of amazing films and began filling out my burgeoning DVD collection with everything from Universal monsters to some of Christohper Lee’s lesser known titles. I also bought every Vincent Price film I could find. 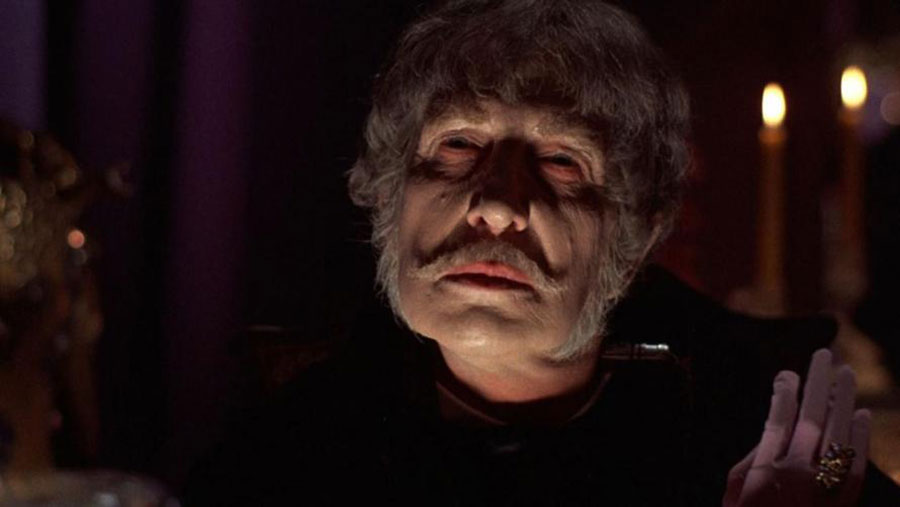 Discovering these movies was so exciting to me, and what made it even more special was sharing the experience with my mom.

She had seen most of the films I brought home in her teenage years and had just as much fun revisiting them as I had seeing them for the first time. These films hold a special place in my heart and I’ve come back to them again and again throughout my adult life.

House on Haunted Hill is a household favorite — my mom, brother, and I could probably recite the entire movie from memory. We watched House of Usher, The Oblong Box, The Pit and the Pendulum, The Abominable Dr. Phibes. As a teenager obsessed with Tim Burton, of course I saw Edward Scissorhands as well as his stop-motion short Vincent, inspired and narrated by Price. 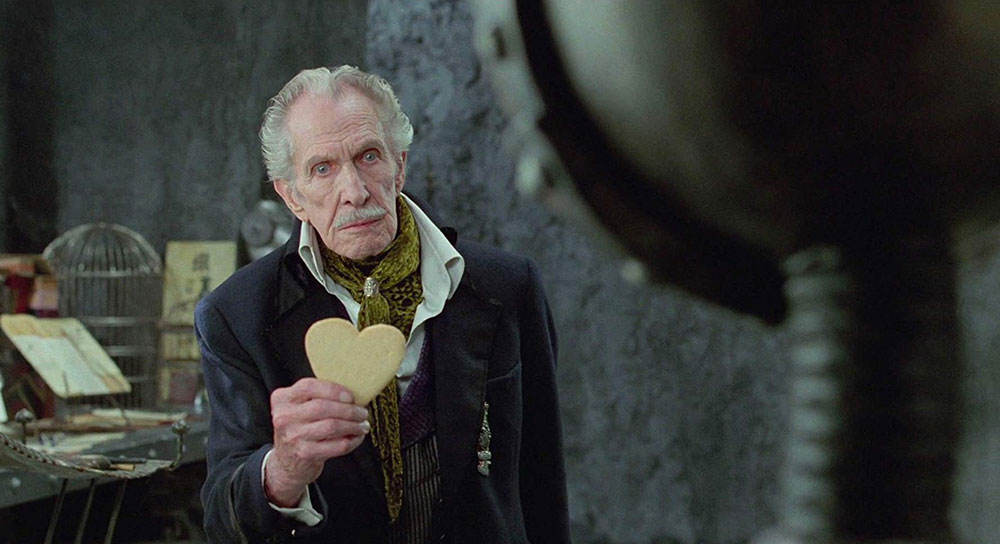 When I first saw Edward Scissorhands, I didn’t know it was Price’s last film.

I knew, of course, that the films I had been watching for years were made decades earlier, most of them decades before I was born. I knew Vincent Price was no longer alive in the mid-2000s. Still, it hit me hard to read about his death, to know that he passed from this world before I ever knew who he was. I realized that I would eventually see all the Vincent Price movies there were to see and there would never be any more. 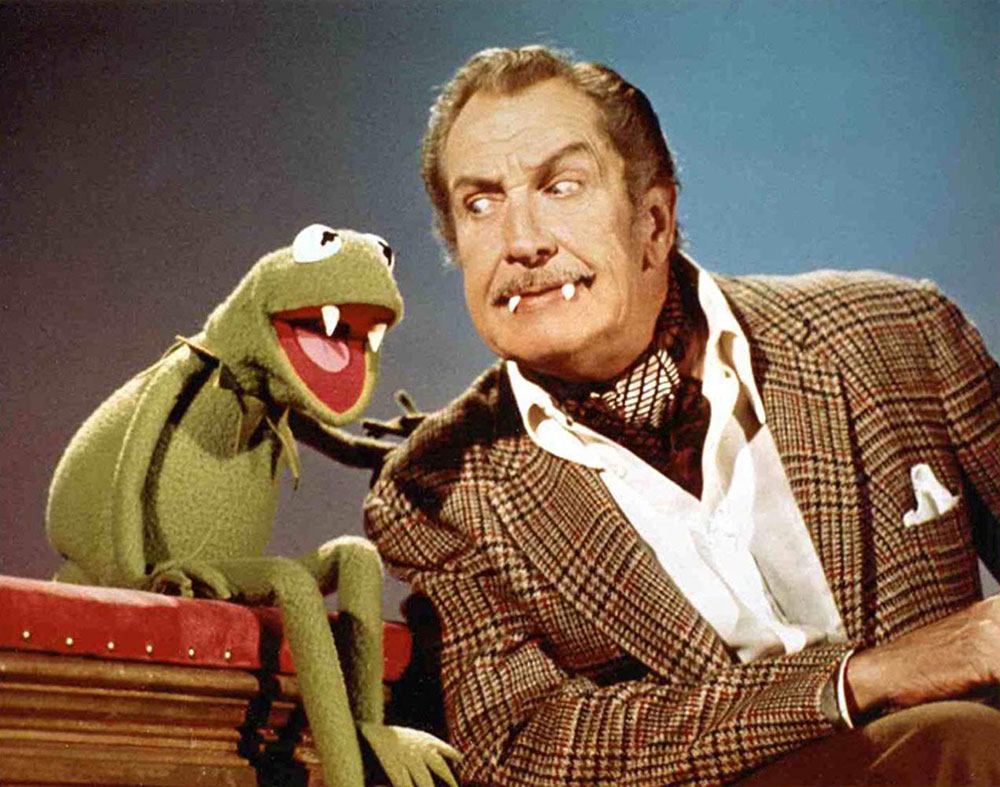 He was such a huge presence in my life, from the first time I put Tales of Terror into my grandmother’s VCR, completely unaware of what new path that small act would put me on.

Whether he was playing some nefarious villain or a conflicted anti-hero, seeing Price on the screen made me feel warm and happy. The familiarity of his presence and the joyful associations that his films carried made me feel held during dark, tumultuous times.

Other films have evoked similar feelings, but there was always something extra special about Vincent Price. Maybe it’s because you could often tell he was having a blast. No matter if he was reveling in how nasty his character was (The Masque of the Red Death) or reciting some truly ridiculous dialogue (The Tingler), Price seemed to genuinely love making the films that have brought so much joy to so many people. 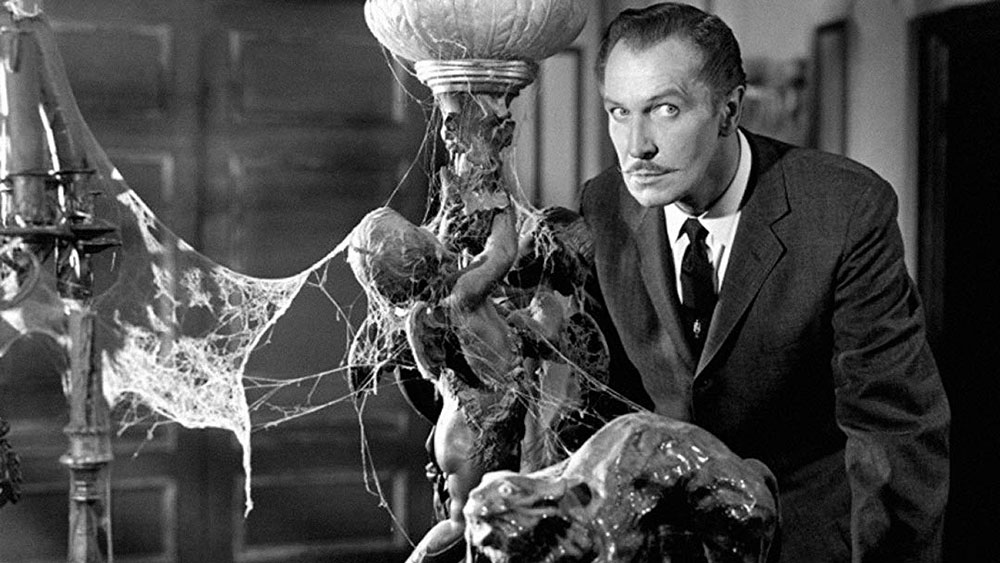 Maybe I felt safe with him because on some level I knew we shared a secret.

In 2015, Price’s daughter, Victoria, told the world that her father was bisexual. By that time, my years of fear, confusion, and denial were behind me and I was finally comfortable in my sexuality. I was overcome with such a feeling of validation, of affirmation, to know that someone who resonated with me so much growing up, someone whose work was a source of comfort during the years of internal struggle, was queer like me.

But, more than anything, I think the main reason I’ve always gravitated toward Vincent Price is simply because it was his face that first haunted me as a kid, it was one of his movies that first terrified and delighted me and shaped the person I would become.

There have been other films throughout the years that have been just as important in developing my love of horror, but you know what they say: you never forget your first. 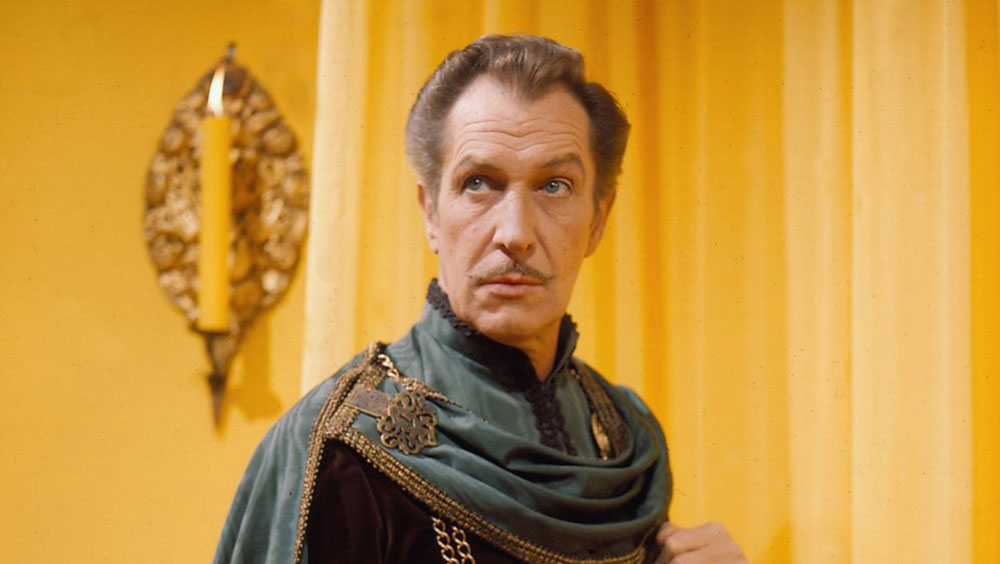