Steel your mind and stomach for the most truly, terminally one-of-a-kind body-swap comedy about a robotic dinosaur ever made. 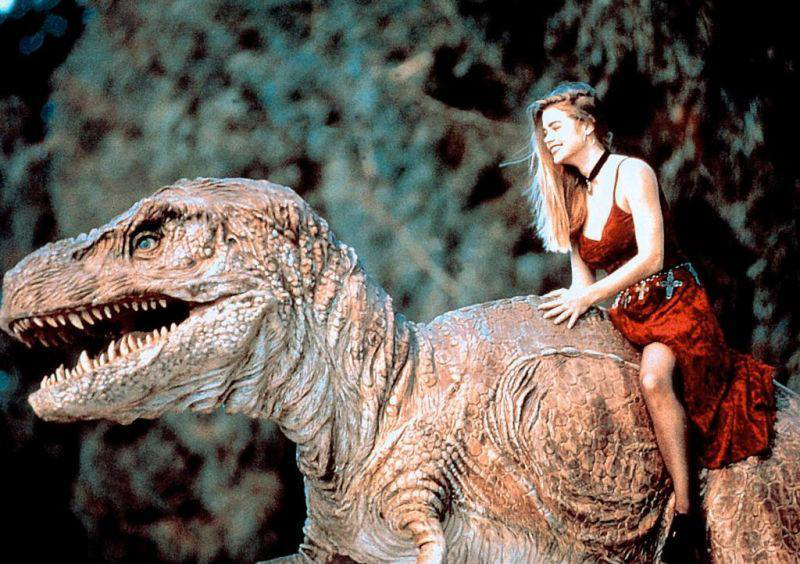 Someday my Shudder Sunday column will go back to sounding like I’m not losing my mind.

Today is not that day.

There’s a fleeting, pharmaceutical purity to the Sick Watch. When you’re holed up on a couch and mossy with the kind of over-the-counter jellybeans that only come in orange and green. Art becomes both distraction and divine relief. If you can barely move, barely breathe, and taste only your innermost slimes, escape is all you’ve got. But with consciousness at its fuzziest and all critical defenses down, movies pass clean through the eyeballs and into the wrinkliest folds of imagination, where dreams are nothing less than documentary.

Yes, I’m writing this in the seductive embrace of Quils both Day- and Ny-. Yes, I watched Tammy and the T-Rex under the same influence. 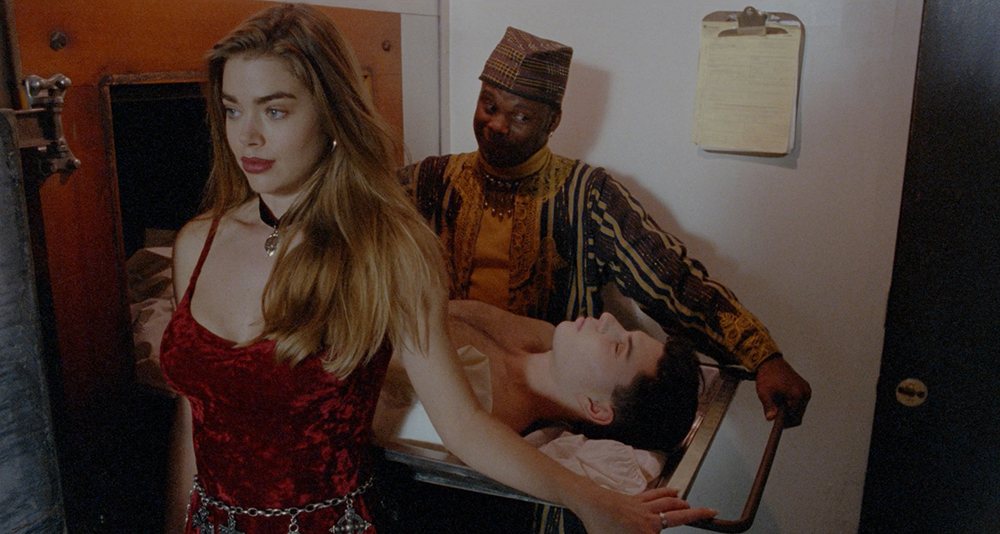 And yes, I encourage you to lick doorknobs until you, too, are sick enough to enjoy it properly.

You ever hear the thing about clocks in dreams? I don’t know if it’s true or not. I’ve never remembered to look. But supposedly clocks don’t work in dreams. Look at it once, might be 6:22. Look at it twice, it might be half past blue. It’s a trick lucid dreamers use to tell their subconscious selves they’re not in Kansas anymore.

Tammy and the T-Rex is spelled wrong in the opening credits. Multiple times, actually. Tanny and the Teenage T-Rex. Starring Denise Richards as Tanny. It made me pause the movie just so I could double-check a title that I’d already read three times on Shudder alone. 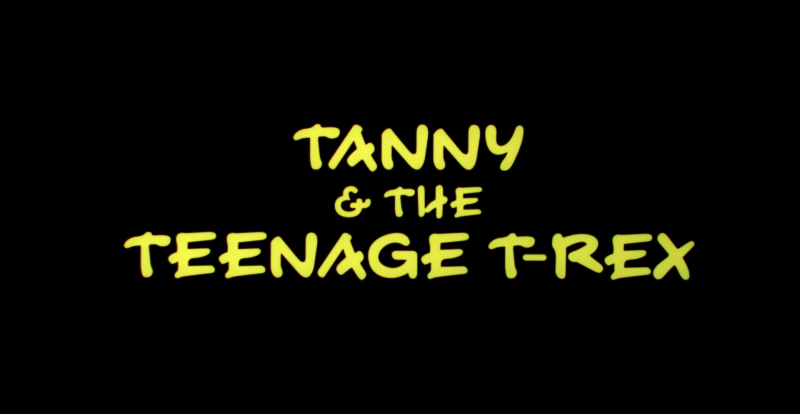 Tanny is your wrong clock.

You’re not in Kansas anymore.

You’re in an after school special about bullying and gang violence in suburban high schools starring Denise Richards in one of her earliest roles and Paul Walker in his ramen-haired prime. Michael (that’s Paul) loves Schrodinger’s Tanny (that’s Denise). She loves him, too. A lot, actually. Maybe a worrying amount, given the zany hell their courtship must eventually endure.

But for the time being, they’re just high school kids with no opinions either way about the emotional viability of dating a robotic dinosaur. The only speedbump in the way of their pubescent passion is Tammy’s ex(?), Billy, the bowl-cut leader of a central casting band of teenage degenerates. The kind that don’t believe in sleeves, employment, or cars with roofs.

They also may or may not have committed violent crimes before. Deputy Norville, played by the legendary Buck Flowers in one of his only non-homeless roles, mentions the school having a restraining order against him. 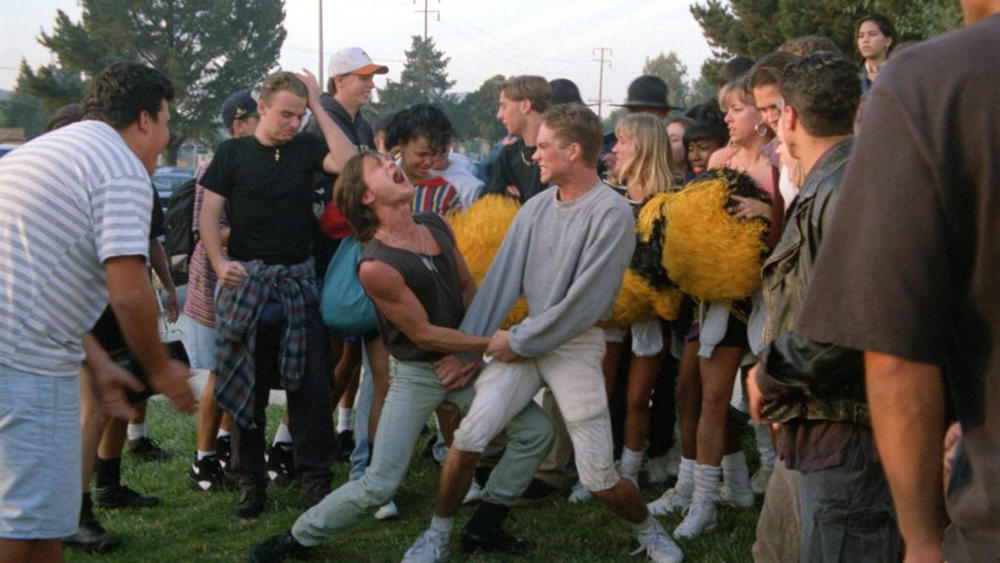 It’s not quite so textbook as Saved By The Bell reruns — to cheer up Tammy, Michael eats a flower — but you know it dead to rights.

Billy shows up. Michael gets tough. They grab each other by the respective balls until the cops call it a no-contest. But then comes one of the greatest cuts in medically enhanced cinema history.

As the assembled students slouch away from the interrupted “testicular standoff” (the movie’s words, not mine), Tammy runs off and Michael helplessly shouts after her. It is futile; she cannot stand to see him fight. So it’s her gay best friend, Byron, who assures Michael everything is okay. “Remember — true love never fails, honey.”

Cut to a full-sized tyrannosaurus rex in mile-long silhouette, shrouded in unmotivated fog and presented like the 2021 Ford F-150. 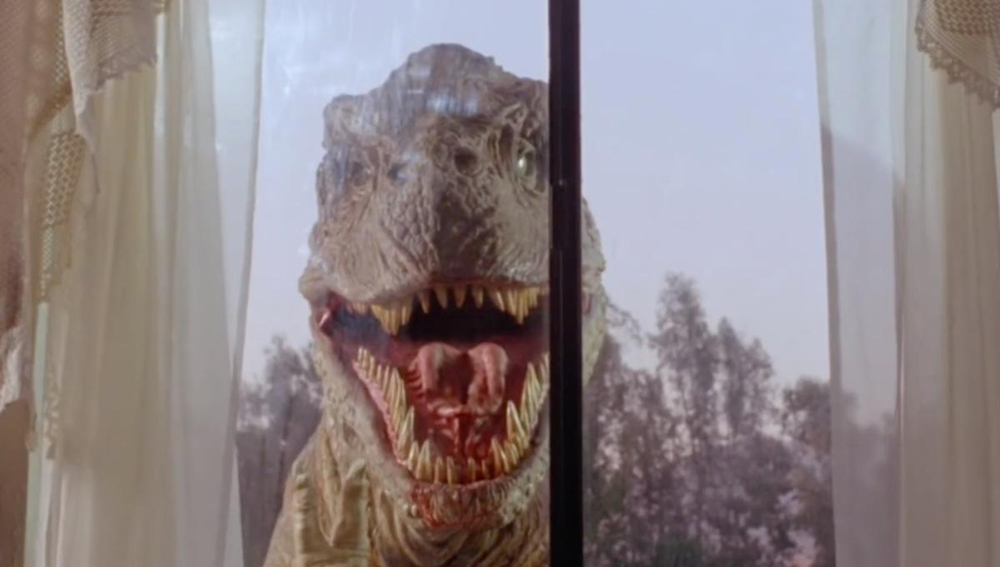 It may sound like internet-standard hyperbole, but this is why I watch movies.

I saw the poster. I saw the trailer. I thought they’d work in the T-Rex gently, organically. But no. Tammy and the T-Rex is cut like a film school exercise to stitch together footage from entirely different movies as watchably as possible.

Not since the days of Roger Corman stitching topless women into Russian space movies has such bold collage paid such artistic dividends.

I never expected that t-rex to just, um, arrive after a schoolyard heart-to-heart about true love’s endless strength. It caught me completely unaware and, given the drugs, unable to properly cope. For a moment too tragically brief, it was magic and I was a dog without the cognitive cynicism to spot the trick.

But there isn’t one, really. Terry Kiser walks in and starts rapturously demanding to see each movable part of the dinosaur do its shaky thing. “Show me it’s power!” he shouts in an E.C. Comics accent befitting a character named Dr. Wachenstein.

If he didn’t get a star on a sidewalk for his work as the title corpse of Weekend At Bernie’s and its sequel, Kiser deserves one for his unyielding commitment to his tyrannosaurus. When he flirtatiously tells his assistant Helga (Ellen Dubin) that they’ll test out its sexual capabilities later, dammit you believe him, nay, fear him. 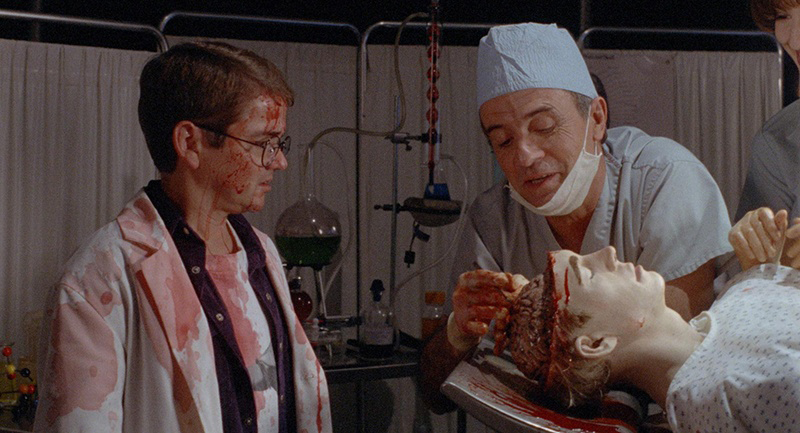 If any of this sounds sarcastic, scout’s honor, it is not.

Tammy and the T-Rex feels like it was made on a well-intentioned dare. And that’s because, like all enduring works of artistic merit, it was.

Director and co-writer Stewart Raffill made a career out of Hail Mary productions. The legendary McDonald’s commercial and Paul Rudd joke, Mac and Me, had no script when he signed on to direct, forcing him to write it on weekends and prep what he’d written the following weekdays. The Philadelphia Experiment started as a John Carpenter script before endless rewrites turned it into mush that Raffill had three weeks to salvage before cameras rolled. The Ice Pirates was supposed to be a $20 million Star Wars riff until the budget got halved, studio brass stole some of the remainder, and Raffill made it a swashbuckling comedy in self-defense.

The stakes for Tammy and the T-Rex were smaller, simpler, and much, much stranger.

Raffill was contacted by a Germa