Difficult to describe and hard to forget, “The Car” might have been a recipe for disaster; but something in this concoction is strangely satisfying.

First time I saw it, I assumed the problem was with me. You can only enjoy a movie so much when watched between the text message vibrations of someone breaking up with you. But now, years removed from emotional trauma and basic cable, I watched it again on Shudder and can confirm: The Car still tastes funny. But at least now I know what I’m eating.

Now that Amblin is no longer just Steven Spielberg’s production company but an entire nostalgic subgenre of kids on bikes getting scared, it’s a treat to see something so beholden to his earlier, meaner works.

The Car is a clean 50-50 split between Duel and Jaws, with some later-period broken home melodrama for seasoning. Take the truck of the former, shrink the chassis and do it up like a toy coupe that comes packaged with a Bruce Wayne action figure, give it the omnipresent menace of the latter’s great white, then sic it on a beleaguered small-town and determined cop in head-to-toe khaki.

It’s easy enough to compare the IMDb tags, especially considering the aforementioned Amblinites, but to The Car’s credit, it has a feel for the intangibles, too.

The dusty anamorphic isolation of the American Southwest, courtesy of cinematographer Gerald Hirschfeld, who shot Young Frankenstein three years prior and knew a thing or two about imitation, lends a one-road town in Utah the same deceptive tension as a one-weekend vacation island in Martha’s Vineyard. Everything’s quiet but the middle school marching band. The sky stays the same Technicolor shade of blushing-blue you don’t see in movies anymore.

There’s a postcard in any direction, if only they felt that welcoming. Instead, the desert is open water. No warning fin, but a distant dust cloud gaining fast. The Car comes riding out of the horizon like a four-cylindered horseman of the apocalypse. 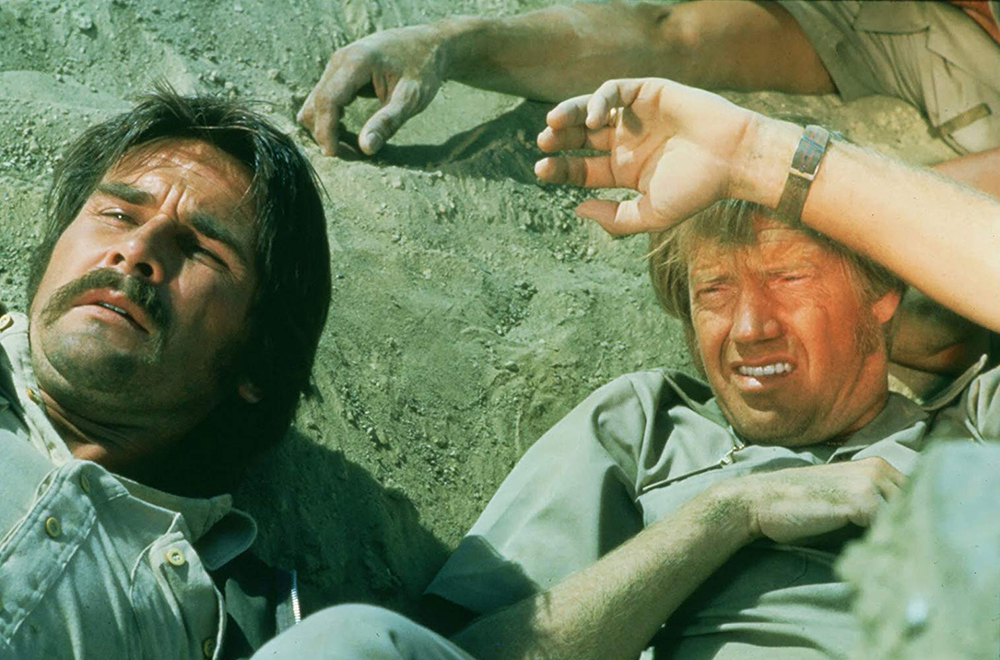 No time for close-ups on awed faces caught in the headlights. Only blink-and-you’ll-miss-it bloodless carnage and the occasional absurdist glimpse of the black beauty struggling to lurk through the rocky terrain. The movie’s single most effective dose of dread comes from a locked-down long take of a phone conversation. As someone calls for help in the safety of their living room, out the window, framed by two floral print crimes against curtains, sit two little stars in the dark. They grow, flare, wink pink at the lens as they get closer. As they get louder, too.

I won’t give away the rewarding jolt, but it’s evidence of a knowing hand at the wheel.

Director Elliot Silverstein, also responsible for Cat Ballou, the American Film Institute’s 10th Greatest Western of All Time, had little passion for a project the producers referred to as “Jaws on land.” 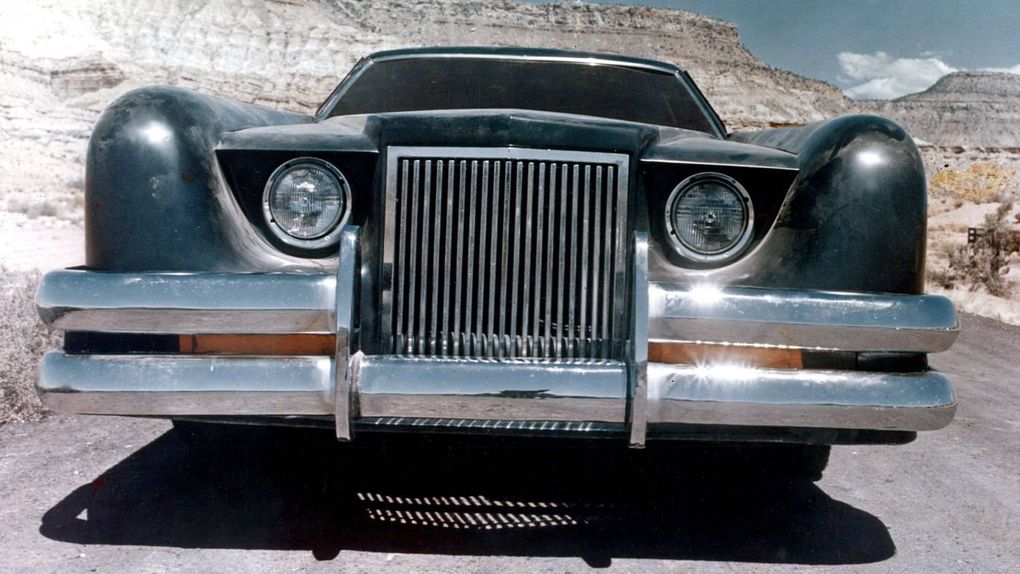 Unlike many hired-gun filmmakers who end up playing with things that go bump in the night, though, Silverstein isn’t ashamed of The Car. He sat down for recent interviews about it for an unlikely Blu-Ray remaster and seemed politely surprised that his “Jaws on land” earned one. At the time, screenwriters Michael Butler and Dennis Shryack assumed their script would get gobbled up by the Corman factory, shot in a week, and jettisoned to the drive-in crowd before the check cleared.

They knew it was a glorified B and, if not an out-right rip-off, certainly a dedicated homage while the iron was still hot. This accidental recipe — a copycat script aimed at grindhouses, a big studio looking to capitalize on its own biggest hit, and a talented director who just wanted to work — gives THE CAR its strange flavor. Somehow, it plays alternatively as both a knowing and unintentional parody of the early Spielberg thrillers it so shamelessly apes.

Life in sleepy Santa Yves looks a lot like life in Amity, only drier. But the townsfolk aren’t Rockwell-ready personalities so much as borderline vulgarities. There’s the cranky old man who beats his wife, and the sheriff who still has the hopeless, high school hots for her. Boys will be boys, including the one that’s been drawing naked pictures of his teacher. The principal seems angrier at the subject than the student. Deputies are given one character trait each so we keep straight who got run over and who’s still waiting to die.

Even our square-jawed, powerfully mustached hero, played by James Brolin when he could out-Burt Reynolds Burt Reynolds, feels like a ninety-minute wink. Why’s he the hero? Look at him. Does he have flaws? A divorce him and his kids get over within three scenes, but it sounds amicable anyway.

And while someone like Chief Brody can ask, “Do you think it was the same shark?,” and sound intelligently justified in doing so, the effect is a little different when the killer in question is a one-of-a-kind, immediately recognizable car that’s provided the only vehicular deaths in this town since its founding. Still, the good guys go, “You don’t think it was the same car, do ya?”

But is it a joke? The best and worst way I could describe The Car is a soap opera that’s occasionally interrupted by Christine.

When an irritable old man storms out of his house to find out who woke him up with a horn solo, he spots a hippie holding the only musical instrument for at least ten miles and still asks with a righteo