There is no watching “The Baby”, only enduring “The Baby” and bearing its psychological bruise like a nightmare you woke from in the nick of time. 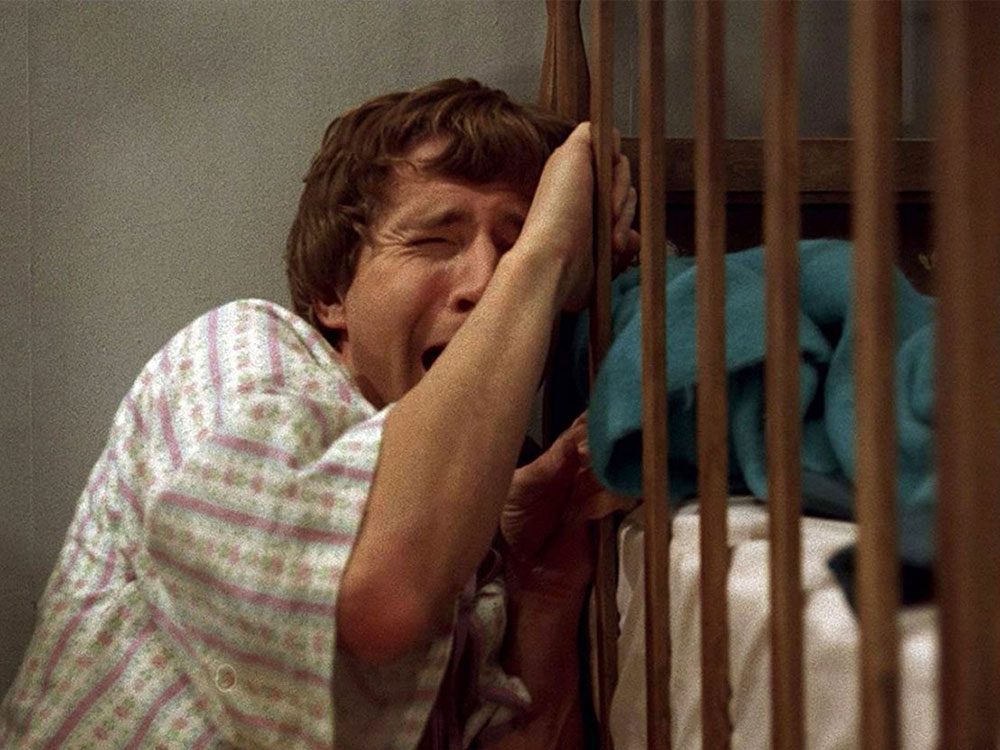 There’s very little science to choosing these movies. I fire up Shudder, fool around, fall in love, and tell you all about it. Sometimes I’ll dig something to its very marrow, but can’t come up with a constructive enough way to explain why. “It’s swell” says plenty, but the editor would be mad if I spent two weeks writing it.

More often, I’ll find a beautifully flawed movie with thumbprints in the brushstrokes. Something misshapen and maybe jagged to most, but to the right people, the perfect fit for a hole in their heart they didn’t know they had. Now that’s gravy, right there. So you can imagine my conundrum upon watching The Baby, a daringly demented acquired taste for which I lack the proper cognitive tools to express my appreciation.

And yet here we are. Like everyone involved in The Baby, despite the overwhelming temptations of logic and taste, I will try anyway and give it nothing short of my all.

Boy did Ted Post have a wild 1973. The TV western vet directed not one, not two, but three theatrically released feature films: the belatedly preferred Dirty Harry follow-up, Magnum Force; the racy adaptation of a best-selling ‘60s paperback about free love, The Harrad Experiment; and the reason we’re all here today, The Baby. There’s no fair way to compare the relative legacies of any two movies, let alone three, but to pay respects to Ted’s year-long whiplash, it’s worth laying them all out.

Magnum Force was the sixth highest-grossing movie of 1973 in the States. It’s still often neck-and-neck with Sudden Impact for the brass-ring amongst Dirty Harry devotees. For reasons many and apparent, The Harrad Experiment received the ignominious honor of being one of 1974’s hottest rentals. Today, it is best remembered in its only review on BestBuy.com, a one-star screed because the 2014 DVD release excised the scene where Don Johnson revealed his Dong Johnson.

I couldn’t find anything about The Baby from the time it was first unleashed. Nothing about how many theaters it played except an unsubstantiated claim that the release was “limited.” Earning an X from the British Board of Film Classification, more or less equivalent to an American R now, couldn’t have done it any favors. But then again what about America, where it was granted the same rating as Despicable Me — a flat PG. It was a decade before the dawn of the all-powerful PG-13. But still, parental guidance was only suggested.

Kids could see The Baby all by themselves. I’d give a redundant organ to find out what they thought of it.

Most reviews and converts came about from home video. Both Severin and Arrow have done their due diligence with Blu-Ray releases that look better than The Baby ever needed to. It’s still on the hip side of Gonzo Cinema. The Room might pack your local repertory weekly, but they’re trading bootleg copies of The Baby in the alley out back. But alleys are for the ‘80s. Now you can wallow in the seedy cult underground without ever getting off your couch. All you need is a Shudder subscription and a relaxed sense of shame. 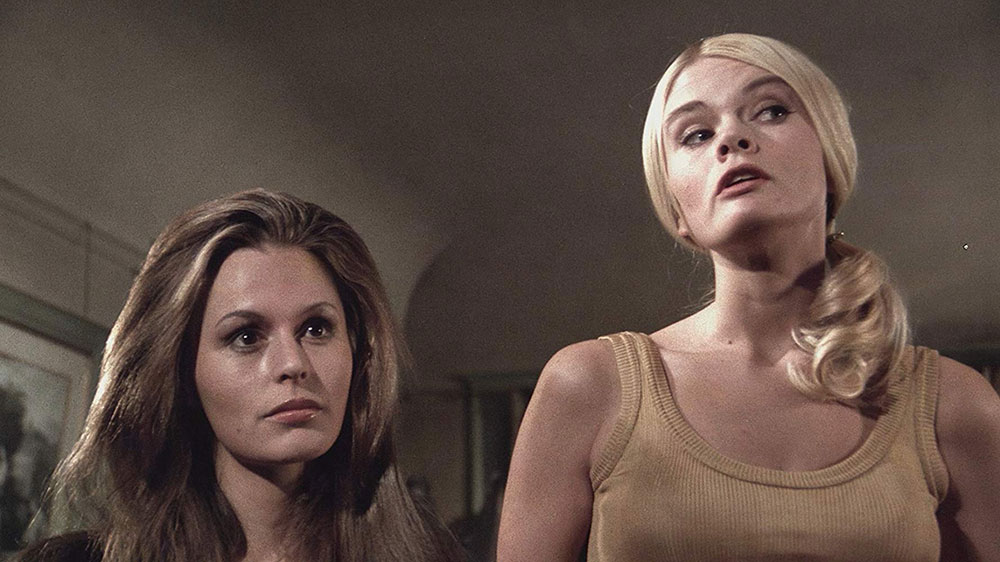 And thank goodness because you couldn’t pay me to watch The Baby in a theater with other human beings.

The raw, primal discomfort of The Baby is right there in the one-sentence synopsis:

A social worker tries to rescue an adult baby from his very creepy family.

Roll that around your head for a minute. Let it sink into your brain wrinkles. Notice the part where the adult baby is not the part deemed “very creepy”? Yeah. That’s a little hint as to the baseline sanity of this thing. I didn’t respect that. I saw Ted Post’s name next to a ‘70s horror movie I’d never heard of. I clicked. I paid the price. 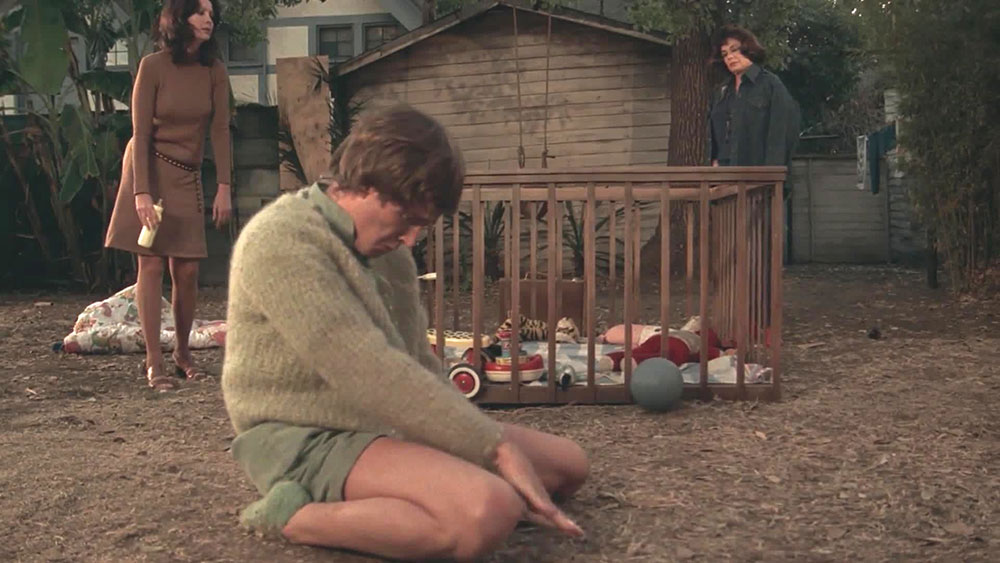 And yet, I feel richer for having seen it.

Like a mortal sin that granted valuable perspective despite the stain of remorse. Yes, I’m still trying to recommend The Baby.

The must-see horror movie of 1973 was The Exorcist. Tobe Hooper and his Texas Chain Saw were still a year out. Both exceptions to the rule of American genre at the time. In concept, The Baby is a lot closer to that rule — a gauzy drama in a creepy house with ghosts, killers, or man-sized infants added to taste. In practice, it weaponizes everything about the bland form.

The Baby looks like a TV movie of the week.  Despite my best efforts, I could not find any record of its budget. The highly scientific eyeball test clocks it as likely the cheapest of Post’s ’73 trilogy; writer and producer Abe Polsky badgered him for a full year to make it, so The Baby definitely needed him more than he needed The Baby. 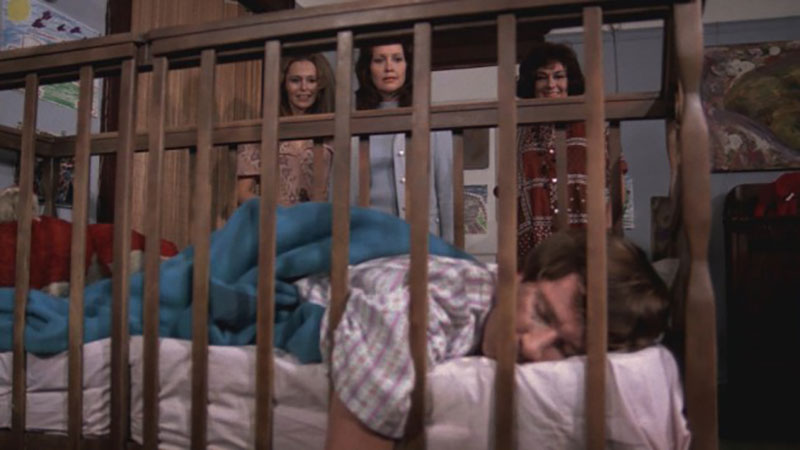 Think about The Brady Bunch. You’re surfing the channels. You spot Alice, almost subliminally, somewhere around Channel 43. You go back. Yup. There she is, where she always is. The house the family. You know it. You know exactly what can and can’t happen. You could probably guess the episode from a single scene, so you stick around to try. Then Mike Brady comes crawling into the kitchen wearing a diaper, squealing like a baby.

It’s a betrayal, right? Feels wrong on a fundamental, personal level. The Baby starts on that level, then shows Jan and Marcia jabbing Mike with a cattleprod as he cries on the floor. Metaphorically speaking. But also literally, there is a cattleprod.

Maybe it’s the commitment that does it. Everyone plays it straight, plus or minus a little camp; Ruth Roman is reason enough to watch, turning her ruthless matriarch into a Russ Meyer pussycat past her prime. But Anjanette Comer, as the selflessly devoted social worker assigned to the otherwise nameless “Baby,” holds the line. Her performance belongs in a network special on domestic violence that aired once in ’75 and never again. But here she is, playing fetch with a Large Adult Son and making us care. By the end, we almost do. Almost. 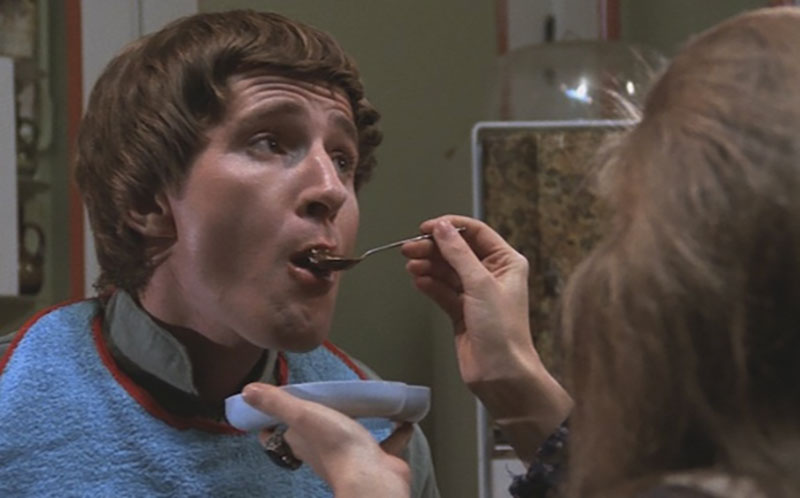 But that credit, that damn-near-got-away-with-it trick, belongs to David Mooney, the titular baby.

His work deserves some kind of honorary Oscar, maybe for Most Devoted or maybe Gutsiest. For better and far, far worse, Baby is never anything less than, well, a baby. The way he moves, the way he whines, the way he wets himself. The way he talks, too, but that’s a cheat. Mooney performed all his own infant squeals, but those audio tracks were lost by the first home video release. The solution was to dub him with actual noises from actual babies, a move that not only makes the visual disconnect even more disturbing but raises horrifying questions about the state of Baby’s arrested development.

Because he must be faking it, right? His family — the conniving mother and borderline evil sisters — must be enabling this behavior. They don’t seem to mind. Mom chipperly massages his seemingly healthy legs so they don’t atrophy, since Baby’s not old enough to walk yet. At least one of the sisters sleeps with him in his crib, sometimes without clothes. They love him, genuinely, horribly. But the second a kindly social worker suggests socializing him to better his cognitive development, they practically hiss in tune.

I cannot reveal the mystery of Baby’s plight. It’s too surprising, too startling, and too indescribably strange. It’s a pull-quote cliché to say “You Won’t See It Coming,” but you won’t. You can’t. If you do, you either cheated or learned something about yourself no soul should. 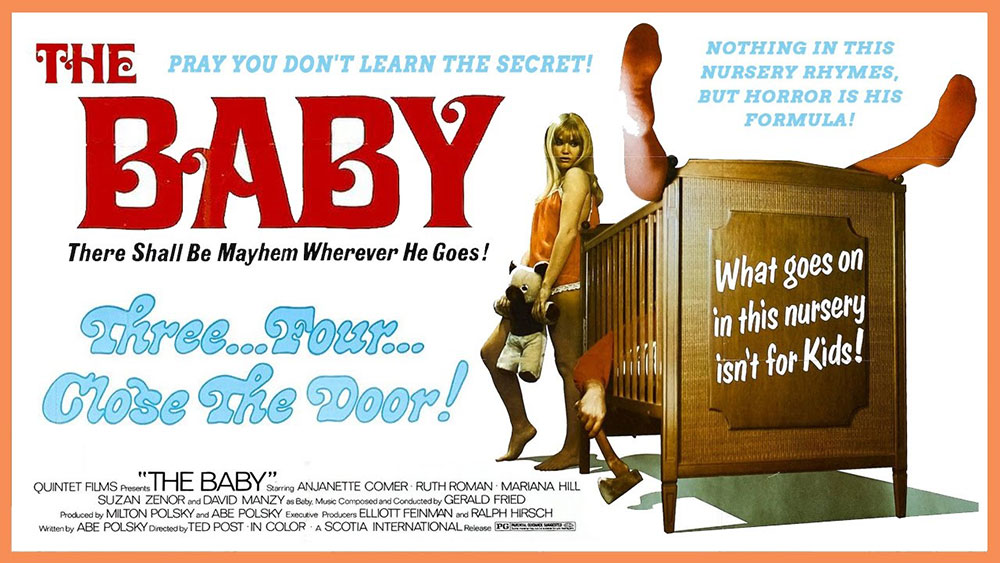 The Baby is not for everyone.

I’m not even sure who I’d say it’s for. If you want weird, not quirky, but weird weird, give it your best shot. I almost tapped out twice — first at the unspeakable babysitter scene and then the wincing inclusion kids with real developmental disabilities — before deciding I’d invested too much to turn back.

Maybe Ted Post reached the same point, after he caved to direct. Before and after it, he was a first-rate craftsman, if not exactly what any film school would call an auteur. A hired gun who knew his way around them; the opening credits of Magnum Force play over a .44 Magnum in close-up, held in a steady hand.  But of his 1973 trilogy, if not his entire career, Dirty Harry doesn’t leave the biggest bruise.

The Baby hurt me. I blame Shudder. Stream it as soon as you can.