Posted by:
Tags:  1980s Nightmare Weekend Ragewar technology in horror The Dungeonmaster The Urge to Kill

1980’s horror films both feared and revered technology, and these three killer tech films viewed the home computer as having near-magical potential. 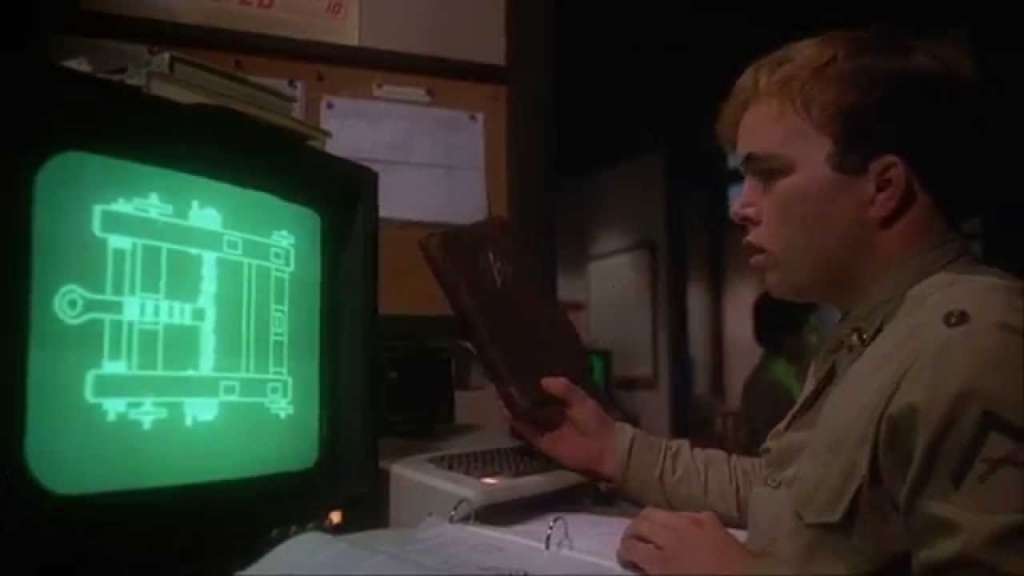 It’s only recently, after years of enjoying the best-worst of ‘so bad it’s good’ cinema, that I realized the best of such movies aren’t entertaining just because they’re failures of cinematic craft to be mocked and riffed-upon. Rather, I find what separates the greats from those that render themselves valueless by simply being dull, is a commitment to be consistent in their weirdness.

If you don’t have an ability to create plausible, recognizable characters who behave in relatable ways and live in worlds that look at least a little like the real one, go all in.

That’s what the people behind these three similarly-themed 1980s tech horrors did. They asked, where is society headed as we embrace the home computer? And happily, all of them did so in a manner that is not so much ‘speculative’ as completely unmoored from reality. Even by current technological standards. There’s an episode of Knight Rider, another relic of the ’80s featuring an all but omnipotent machine, in which someone asks, “How can it do that?” The answer given would seem to encompass the attitude behind the films discussed here: “I don’t know. It just does.” 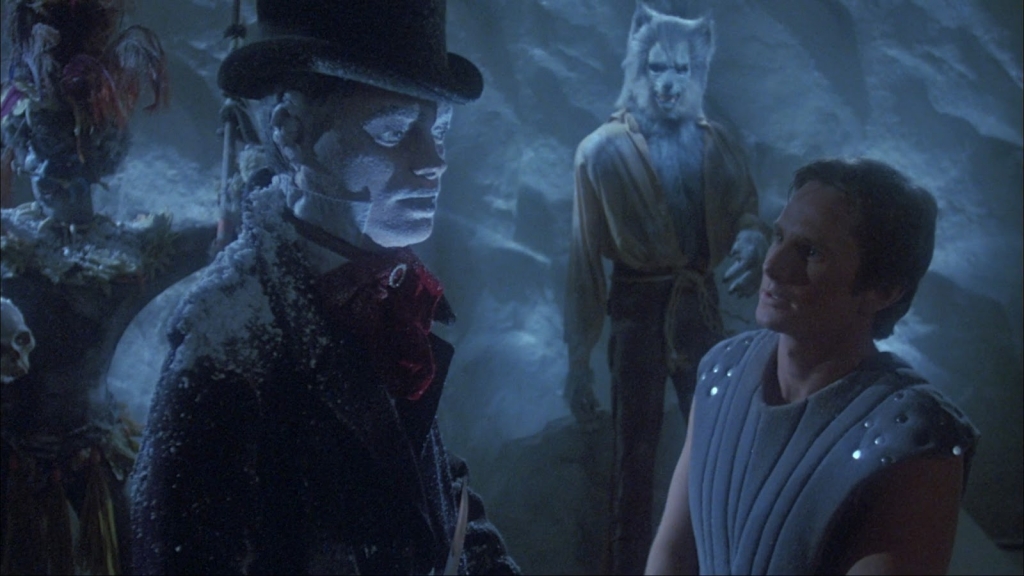 Paul Bradford, (Jeffrey Byron), is what we in the ’80s called a ‘computer whiz’. He lives with  X-CALBR8, his own, very special invention, which appears to be a contemporaneous desktop computer. But, Paul’s whiz-ardry is SO exceptional, ‘Cal’ has insane powers that, for example, allow him to take control of traffic lights (via his eyeglasses) in order to facilitate an unimpeded jog. Yeah, Paul’s kind of a dick. More on that to come.

Because he plays to win (?), Mestema grants Paul the use of his ‘magic machine’, which he accesses through a nifty metal wristband — containing a heretofore unmentioned laser. I guess Paul just figured, “Better to have a laser and not need it,” right? When Paul mostly kicks ass in the challenges (thanks, laser!), Mestema starts to bargain. Paul’s not having it (our hero!) until Mestema puts a gaggle of hot, ready ladies on the table. And. Paul. Visibly. Pauses. To. Consider. See? Dick. This movie is deeply wrong — and soft-headed. Enjoy! 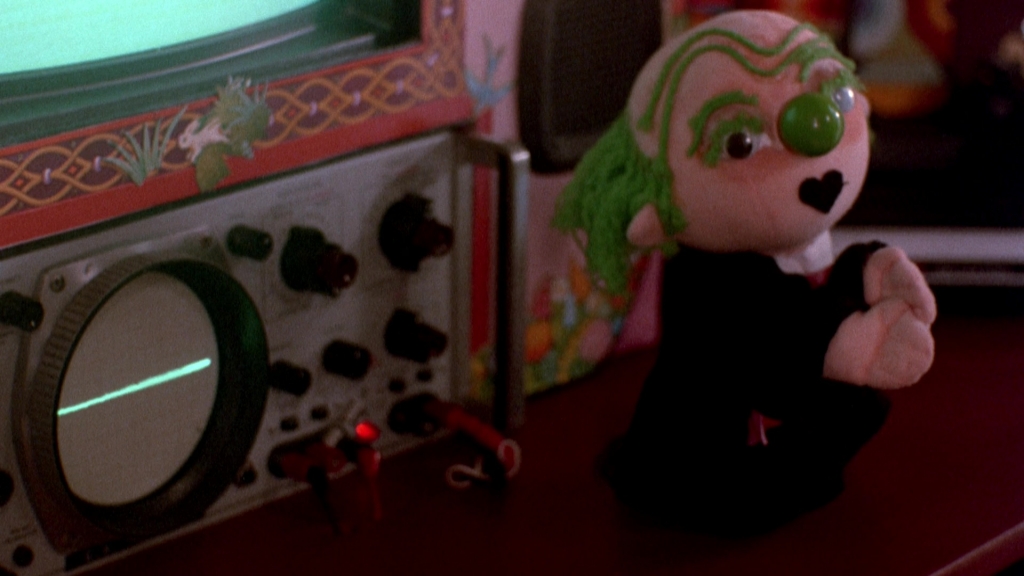 You get two supercomputers in this one: George and Apache. The science of it all is, to put it charitably, vague, but George’s interface with the world is in the form of a hand puppet. That gives the heroine (Debra Hunter) love advice. Yep. Regardless, they’re both the invention of  Professor Edward Brake (Wellington Meffert). You’d assume he’s a computer scientist but, no; he’s in the behavioral research game (can’t be more specific than that; again, made up science).

The doctor’s daughter, Jessica (Hunter), comes home from college for a visit on the weekend in question, just as the Professor’s evil colleague (Debbie Laster) has gone rogue and is escalating to human trials in their ill-defined work, which turns deadly for…reasons. This may be the weirdest of the bunch.

It’s a struggle to articulate the machinations of the bizarre main story, and even the peripheral action is exceptionally odd. Some of it centers around a bar the filmmakers try to sell as a dangerous dive for the likes of a local Hell’s Angels-type (the mighty Robert John Burke). But it’s appointed with pinball machines and classic arcade games; and there’s even a line of dialogue to establish they don’t sell hard liquor, just soda and beer. Wha?! All that, some gratuitous sex, AND dubbing reminiscent of Italian exploitation? Get this movie into your life! 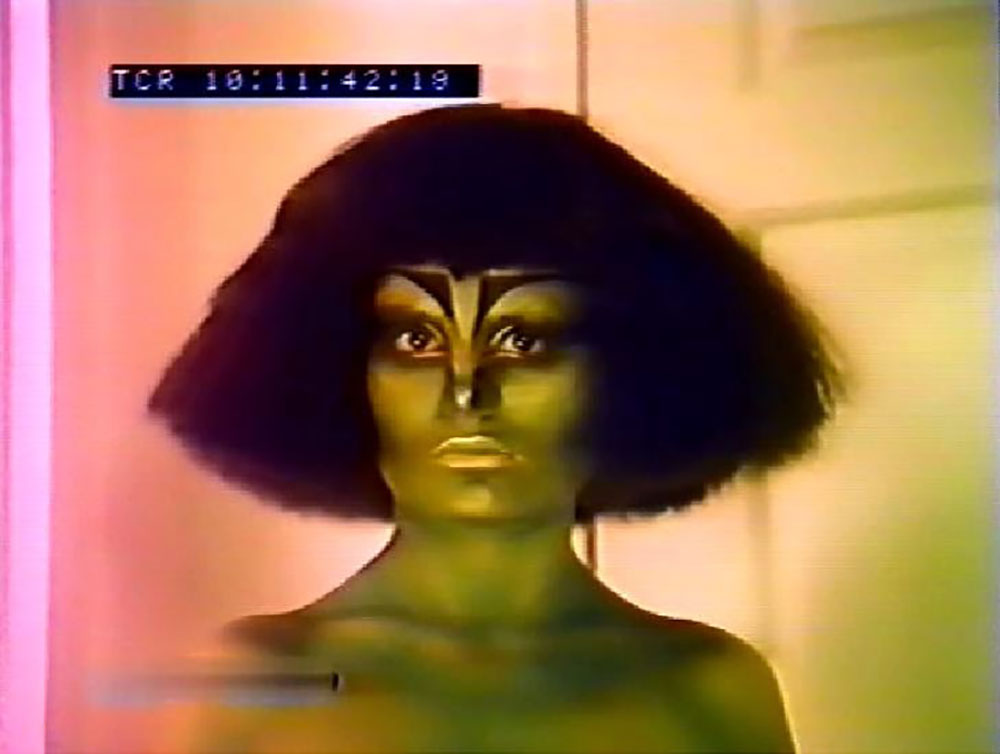 This one clears a very low bar to be the most plausible of the three. When he’s not making hit records, big shot music producer Bono Zorro (Peter Gordeno) hangs out in his computer-controlled sexy pad (“It’s a purpose-built seduction machine,” one secondary character marvels). The computer here is the ‘Central Environment Control System’ or, as Zorro tells a lady conquest, “Sexy for short” (it’s not for nothing that our man pronounces his name BONE-o).

Sexy opens and closes the door, turns the Jacuzzi on and off, et cetera; nothing entirely unbelievable. However, Sexy also has a jealous streak and is killing off Bono’s lady friends. We get deaths by scalding shower, tanning bed, and one by…electric toothbrush.

Sexy occasionally manifests in the form of a background dancer from Billy Idol’s Flesh for Fantasy video, and it’s never made clear why Sexy’s designers thought such a form would be necessary for running a household (my first guess was that it’s a hologram, but it’s able to operate a car at one point late in the action so, what?). Yeah, it’s all quite incompetent but also wildly fun, and chock full of R-rated titillation. Urge to Kill totally computes.

This one doesn’t have a DVD or Blu-ray release, but you can watch it in all its glory here on YouTube.