The Fundamentals of Fear in “Magic: The Gathering”

Posted by:
Tags:  Delver of Secrets Magic The Gathering Mark Rosewater Wizards of the Coast

As hard as it may sound to terrify someone through a card game, the talent behind “Magic: The Gathering” have mastered unique ways of inspiring fear.

Fear is an emotion so versatile, it can be found anywhere. Even in unexpected entertainment styles, horror can show up when one least expects it. Players shouldn’t really be scared by a card game like Magic: The Gathering, but the designers at Wizards of the Coast (WotC) have managed to find unique ways to send chills down your spine without relying on violin plucks or jump scares.

There are three techniques that the designers at WotC implement in order to create horror with cardboard and ink: imagery, mechanics, and storytelling (or flavor). 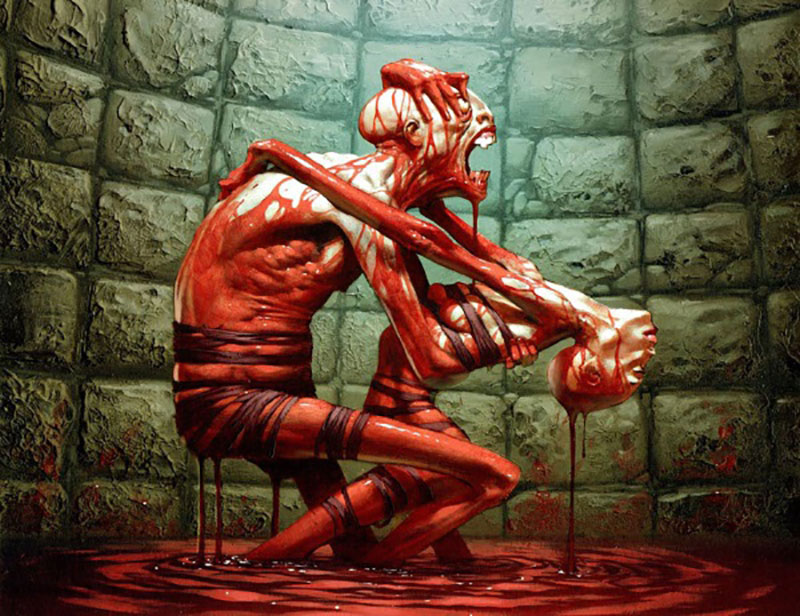 Showing gruesome or harrowing images is the most up-front way to scare someone, but that does not make it the easiest. It takes great skill to create an image that truly shakes someone to their core. Magic: The Gathering touches on a variety of horror genres through its use of imagery, including overt and gory artwork such as “Brain Maggot” and “Macabre Waltz.” For these pieces, the horror is visceral and put right in the player’s place. It lacks subtlety, and the brutality terrifying.

This type of art plays on our darkest, most primal fears — an alien entering our body, or a maggot slowly carving its way through our flesh towards an unprotected brain. The worst part is knowing you are helpless to stop the invading force once it’s inside, and this is the kind of paralyzing fear and vulnerability the art perfectly captures.

Then, you have art where the horror elements are merely implied. This usually requires the player to come to grips with their situation through careful observation. Examples of this include the art from “Pulling Teeth”, “Village Cannibals” and “Broken Concentration.” All these pieces respect the player enough to only hint about what is going on. It’s the anxiety caused from being seconds away from getting your teeth violently ripped out, or the realization that you are trapped in bed, surrounded by cannibals. It’s watching the dread on someone’s face as their sanity shatters.

This doesn’t even begin to touch on some terrifying creatures that Magic has produced, such as mechanist cult leader “Elesh Norn, Grand Cenobite” or the existential monstrosity with “It That Betrays.” When it comes to art, Magic has mastered capturing a variety of horror through unforgettable images alone. 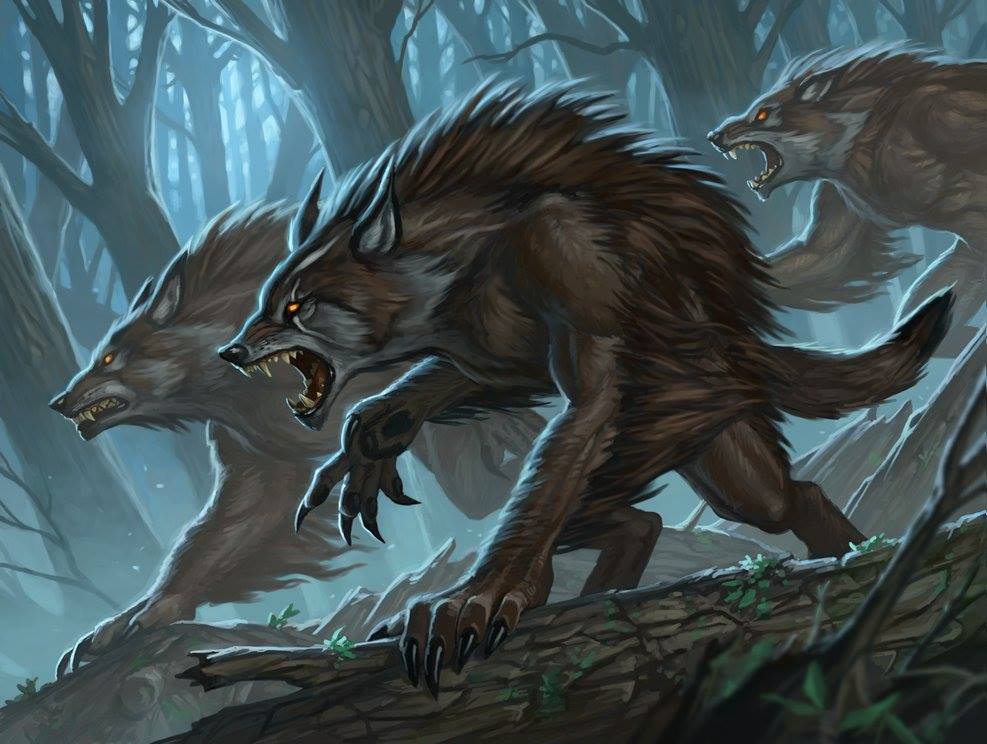 One of the Pack. Art by Craig J. Spearing.

Sometimes a card can be terrifying because of what it represents rather than what it shows. For some competitive players, this can be a card like “Oko, Thief of Crowns.” While he may not be traditionally scary, he is certainly horrible to play against. There are several cards that tap into fear through their abilities. For example, a card like “Darksteel Mutation” can transform a problematic creature into a powerless threat that cannot die. The horror of this is obvious when you consider a fate of being trapped inside a beetle’s body for the rest of your life.

There are, however, more intricate examples, such as Double-Faced Cards (DFCs). These cards have two completely different arts and abilities featured on each side, and each requires a condition in order to have them transform. They made their debut in the Innistrad set, which was based off classic horror stories, and are primarily used to represent werewolves — with the double-sided nature of the cards serving as a metaphor for the drastic change of the Lycan transformation. 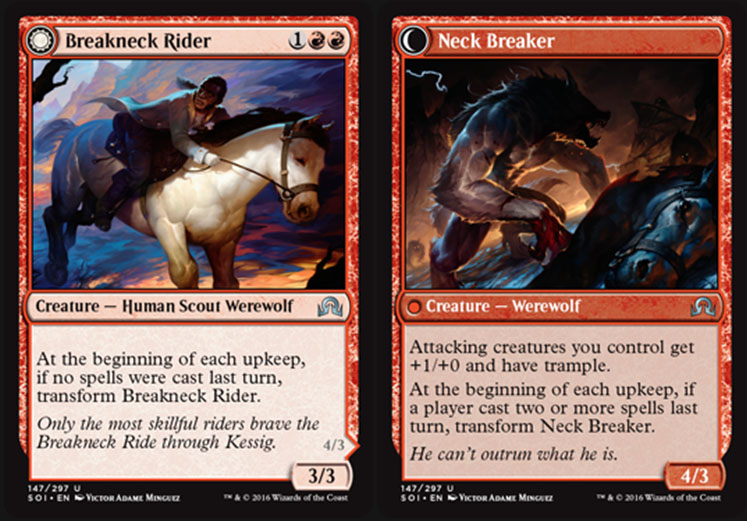 There are other examples, such as “Delver of Secrets.” On the front side, we see a weak scientist on the verge of a breakthrough. Once you meet the condition, you can flip him over to reveal his grisly fate: a man whose obsessive research pushed him to become his final experiment, and resulted in him mutating into an abomination of man and bug.

The greatness of DFCs comes from Mark Rosewater, a lead designer at WotC, who felt that: “Horror is about transformation, watching the innocent get turned into the corrupted. Once we hit upon transformation, I knew we had found the thing we needed to build the set around”. With this as the guiding principle, the design team managed to create a mechanic that perfectly mimicked the sense of dread and tension one feels watching horror movies; as the scare is often about the reveal, with the tension coming from anticipating that reveal. 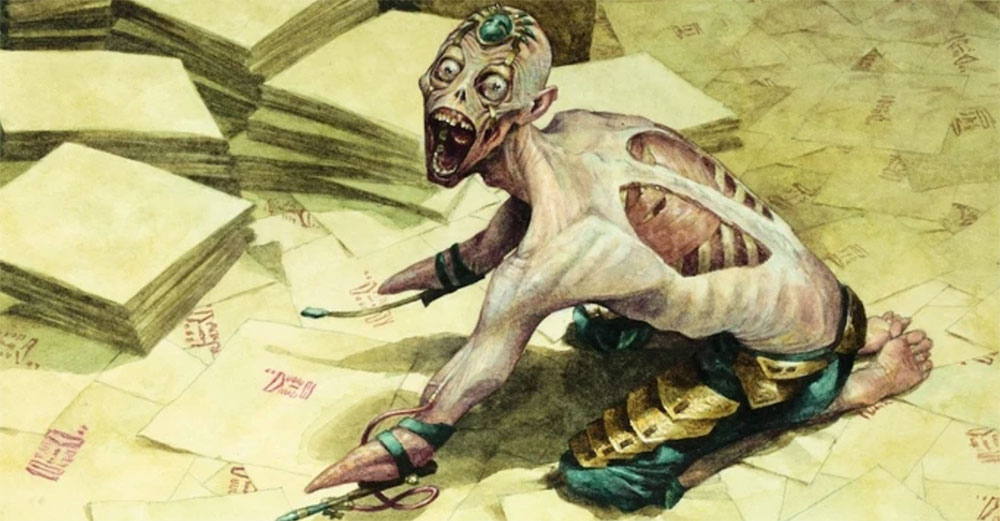 What really makes Magic so terrifyingly effective is how every component of a card — from the art, to the name, to the specific powers and abilities, and even to the color — comes together to tell a full story. In the Magic community, this is often referred to as ‘flavor’, which was coined from the flavor text found at the bottom of most cards.

In terms of horror, there is no better example of this than the card “Ad Nauseam.” It is a Latin phrase that, when translated, means something being done to the point it is tiresome or detrimental. The first thing that strikes you when looking at this card is the art. You are greeted by someone who is on the line of life and death. He is scribbling the same icon on thousands of pieces of paper. If you look further into the piece, you can see he has done this for so long, his hands are worn down to nubs. Any ink he had is long gone, and now he must resort to using his own blood in order to continue his obsession. There are many more grisly details, but I will leave you to find them. 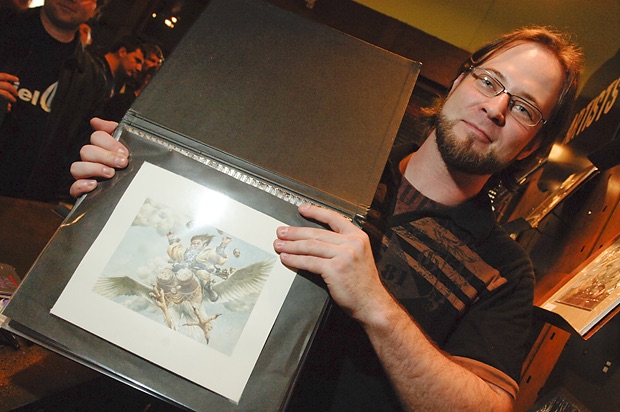 The name and art match up perfectly, but what about the mechanics? What the card allows you to do is to draw cards indefinitely, but there is a catch: you lose life every time you choose to draw a new card. By doing this, it can bring you closer to victory, but you are sacrificing your own life in order to do so. When this card is played, the player and the man in the art become one and the same by doing a task, non-stop, even if it costs you everything.

There are many more cards like this where everything comes together to tell a truly chilling story, and it’s the reason why Magic has been such a compelling, enduring, and influential card game for over 20 years now. It’s impressive how well these designers create mood and draw players into an entire world of horror adventure using just cardboard.

No matter the medium, horror will always be a genre that artists love to explore. Magic: The Gathering has a harder time than most other mediums, as it is relegated to palm sized rectangles. But the designers at WotC were up to the task and have easily succeeded in terrifying players both new and old.

I am just a chill guy who enjoys being scared. I love it so much that I decided to write about it. I especially love horror games because I get to be the idiot that makes all the bad decisions.  Read Full
More posts by the Author »