“When the going gets weird, the weird turn pro.” Alice

I met author Raul Contreras at a number of conventions before I finally got my own copy of his wild book, Alice’s Bloody Adventures in Wonderland and gave it a read. This is the second book of its sort that I have read, (Pride and Prejudice and Zombies being the other). But, unlike the latter, I really enjoyed this rewrite of a classic novel.

In this adaptation of Alice in Wonderland, we enter into a much bloodier version of the story and meet a seriously different Alice. In the original story we all are aware of the drug use and many other disorders that writer Lewis Carroll had, and it shows in the book. So this new more savage direction is not a surprise. (Also bloody is in the title!) Raul took what was already demented and drug induced about the story and kept going, bringing us a newer, more modern and brutal tale. This no-so-innocent Alice adapts quickly to the violence of the world she has been literally dropped into. Just a note right now, this book is meant for adult readers — not children! 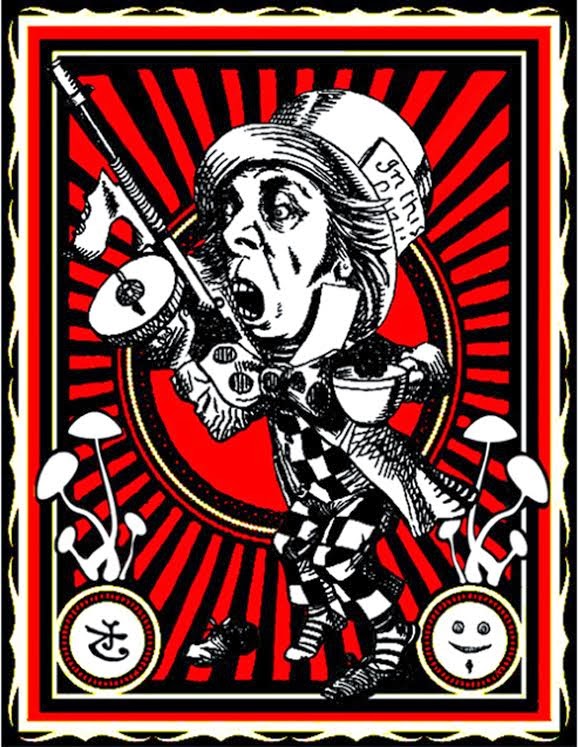 The bloodbath begins immediately as we open the book to find the White Rabbit brutally murdering Alice’s sister Edith and her cat Dinah, while she was dozing off. Alice, seeking revenge, follows the sword carrying creature down the rabbit hole and finds herself in the weird, dark and violent world called Wonderland. Is it a nightmare, or is it real?

All of our favorite characters appear, but Raul has added new dimensions, (mostly violent) to their characters and we see them all in a different light. This version is much more sexual, bloodier, as mentioned, and was kind of like a train wreck- you shouldn’t slow down to see if there are bodies, but you have to look, and in this case, have to keep reading to see what new atrocity will happen next.

Alice’s Bloody Adventures in Wonderland is an adaptation of the original book, but with other classics thrown in along with 60s/70s and current music, new drugs, really inappropriate language, gore and many twists and turns that I don’t want to share, because you should really read it yourself. Warning: this is not your grandma’s fairytale book! Alice is not a very nice girl, and liking her is not the point. She becomes a warrior! But wanting to know what this crazy, violent, sexualized teenager with the bad language will do next, is why you will keep on reading.

“What the heck. Buy the ticket, take the ride.” Alice shrugged and popped the mushroom into her mouth and waited.

Raul did a great job with the rewrite. He adds a lot of new details, dialogue and gore to create the dark side of Wonderland that is in this book. The details added to the scenes were terrific and I could almost see the places in my head by the descriptions. The changes in who the characters are in this version are sometimes funny and sometimes brutal, but always unique. The book is action packed and a lot of fun! 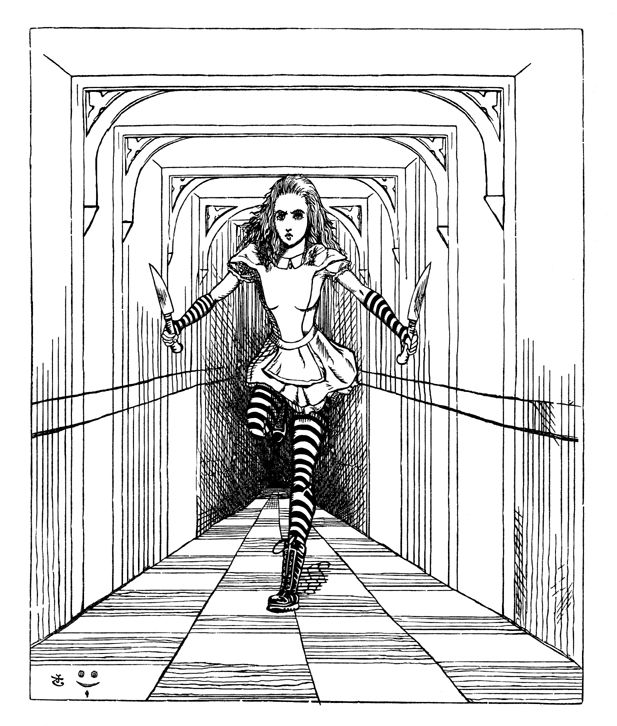 The illustrations are amazing. Taking the original drawings by Sir John Tenniel and elaborating on them was done masterfully by artist Tweedle Guns. I could see how this would have worked as a graphic novel instead of a regular book too. There are so many scenes that I could picture completely drawn out in a comic book. Maybe that could come next?

So, for a fun adult read I recommend Alice’s Bloody Adventures in Wonderland by Raul Contreras and Lewis Carroll. This demented modern interpretation of Alice’s Adventures in Wonderland is available on Amazon.com and signed copies at www.tweedleguns.com. If you are a horror convention goer like me, look for Raul Contreras to be at many of them. There you can buy from him directly and also get many fun items with Tweedle Guns’ art on them like jewelry and purses.

“I abhor violence, but it makes for a nice calm after the fact” said the cat. “Change is good and necessary” said the Butterfly. “And madness, because madness is profitable” The Cat.