Cheer and Loathing: Rage in the Cage

We proudly welcome the Cheer and Loathing podcast to our network — kicking things off with a passionate Nicolas Cage love affair/hate fest.

ABOUT THIS SHOW
She’s a lover, he’s a fighter. Together, they’re CHEER AND LOATHING. Tune in to hear your hosts, Stephanie (Cheer) and Casey (Loathing), clash over the films they love — and the ones they love to hate. With a new theme each month and related topics each week, they’ll make a case for the good and the bad; it may even get a bit ugly!

Whenever Morbidly Beautiful Program Director, Casey Chaplin, and I have bantered about movies, current events, and hot topics in the genre, we’ve often joked about how differently we see the world. I tend to be a cheerleader for everything, often passionately defending the underdogs, championing the outcasts, and rallying around the unloved. When I love something, I REALLY love it — leading to some very animated and impassioned conversations.

Casey is the quintessential yin to my yang — or calm to my crazy, however you want to look at it! He is far more measured, more pragmatic, and much less easily impressed. When I have just seen the latest life-changing movie that I can’t wait to coo about, I will squeal, “OMG!” with the fervor of a teenage girl crushing hard over the dreamy quarterback. If Casey dug it at all (there’s a good chance he thought it was garbage), he will calmly and nonchalantly say, in his dulcet toned-voice, “Yeah, it was fine…I guess.”

As much fun as it is to disagree on almost everything and tease each other for our over-the-top fervor or our exasperating stoic apathy, we decided it might be way more fun to battle in the ring rather than brawl in the streets. Thus, the CHEER AND LOATHING podcast was born!

Stephanie (Cheer) is the Editor-in-Chief for Morbidly Beautiful, a site she launched in 2015. Stephanie is also a professional writer, editor, graphic and web designer, and Rotten Tomatoes approved film critic. During the day, she works as a Marketing and Creative Director. A former English and Film Major, she’s a serious cinephile, bookworm, and lifelong horror lover. She’s worked in film as a Producer and Art Director, and she is an avid supporter of independent filmmakers, artists, and small businesses.

Casey (Loathing) is the Program Director for Morbidly Beautiful. He is an experienced podcaster and broadcaster, with a passion that has spanned over a ten year career in the media industry. Starting in 2009, he worked as an on air host and producer for several radio stations. From there he joined his first podcast, The Gamer’s Mantra Podcast, which lasted a year. He went onto write two novels, and have several other stories and poems published. Later on he worked for Sanitarium magazine as a reviewer and content provider before branching off to create what would become the Horror Shots Podcast. 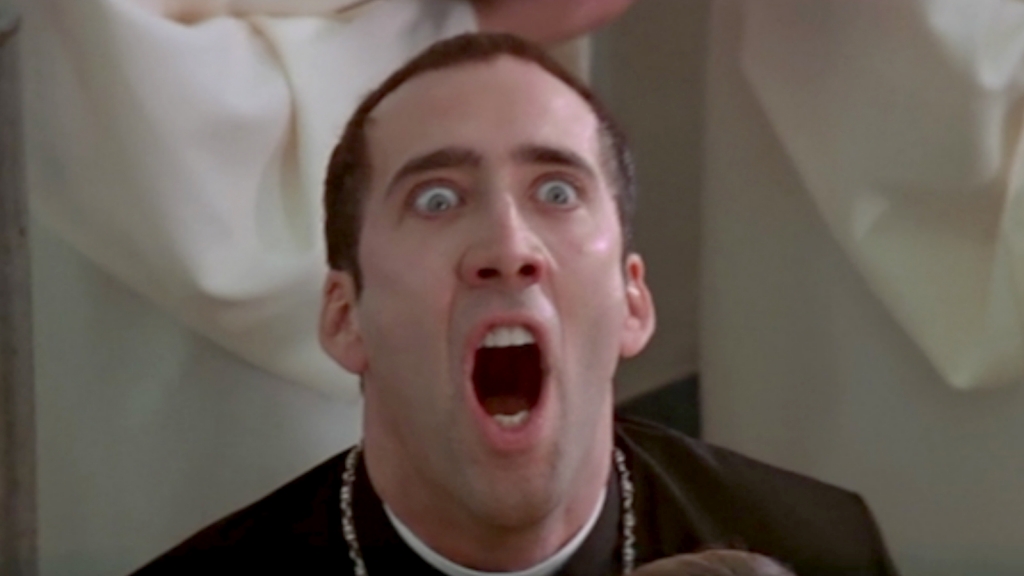 On the premiere episode of CHEER AND LOATHING, Stephanie and Casey kick off “Nic Cage Month” by debating some of Cage’s Cagiest roles in Face/Off, Mom and Dad, and, of course, The Wicker Man. Stephanie cheers Nic’s one-of-a-kind screen presence and that gloriously over-the-top charisma he’s known for. Casey, on the other hand, loathes Cage’s quintessential camp and scenery-chewing mania.

Who wins this ultimate Cage match? Tune in to find out!

New episodes of CHEER AND LOATHING drop the first three Sundays of every month, with possible bonus content every fourth Sunday. Tune in next week for Week 2 of Nic Cage Month. During our Valentine’s Day special, we’ll be discussing the anti-love story of loneliness and insanity, 1988’s Vampire’s Kiss, and the true love/revenge tale, 2018’s Mandy.

ABOUT CHEER AND LOATHING
Cheer and Loathing is hosted by Stephanie Malone and Casey Chaplin. You can find Stephanie on Instagram at @srgreenhaw or on Twitter at @smalonedesign. Casey, unsurprisingly, hates social media. But you can still follow him on Instagram @ominousoriginspod and Twitter at @horrorshotsprod. Check out our show page on Anchor to catch up on any episodes you may have missed. Our illustrated, Halloween-inspired Cheer and Loathing avatars were hand drawn by the incredibly talented Kitty Morgan (@kittymorgann on Instagram).