Bloodsucking Capitalism: We dig deep into 1988’s “Vampire’s Kiss” as an effective indictment of economic exploitation, as timely now as ever. 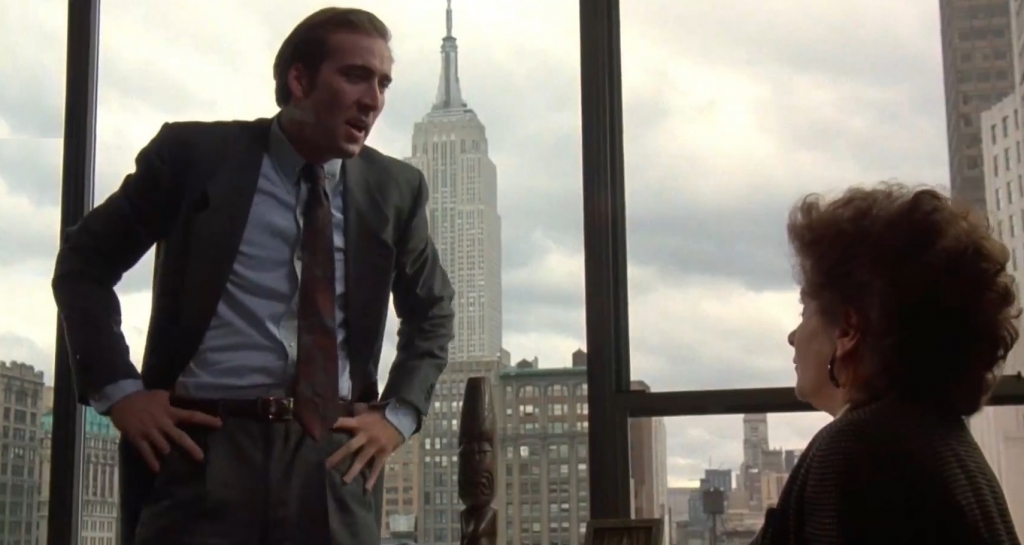 In 1988, director Robert Bierman perplexed distributors and audiences alike with his bizarre film, Vampire’s Kiss, featuring up-and-coming actor Nicholas Cage, who was still riding a wave of popularity after having just starred opposite Cher in Moonstruck. The film shows Cage in what may be the pinnacle of his over-the-top style of method acting, complete with random mood swings, inexplicable outbursts, and incongruent line delivery.

The performance almost overshadows the rather curious storyline about a man who believes he is turning into a vampire.

Cage’s Peter Loew is your typical 1980’s New York City yuppie — lording over a literary agency in his high-rise office building by day, womanizing by night, and never to be seen anywhere without a suit and tie. After a tryst with a mysterious woman (Jennifer Beals) ends in a bloody bite on the neck, Loew starts to notice strange changes in himself.

At first the changes lead him to act out aggressively  — particularly to one of his secretaries, Alva (Maria Conchita Alonso), and occasionally to his psychiatrist (Elizabeth Ashley)  — until eventually his sanity completely unravels and he leaves a trail of destruction in his wake.

Peter Loew is a character true to form, in the tradition of crazy rich white men such as Patrick Bateman, Gordon Gekko, and The Wolf of Wall Street’s Jordan Belfort. 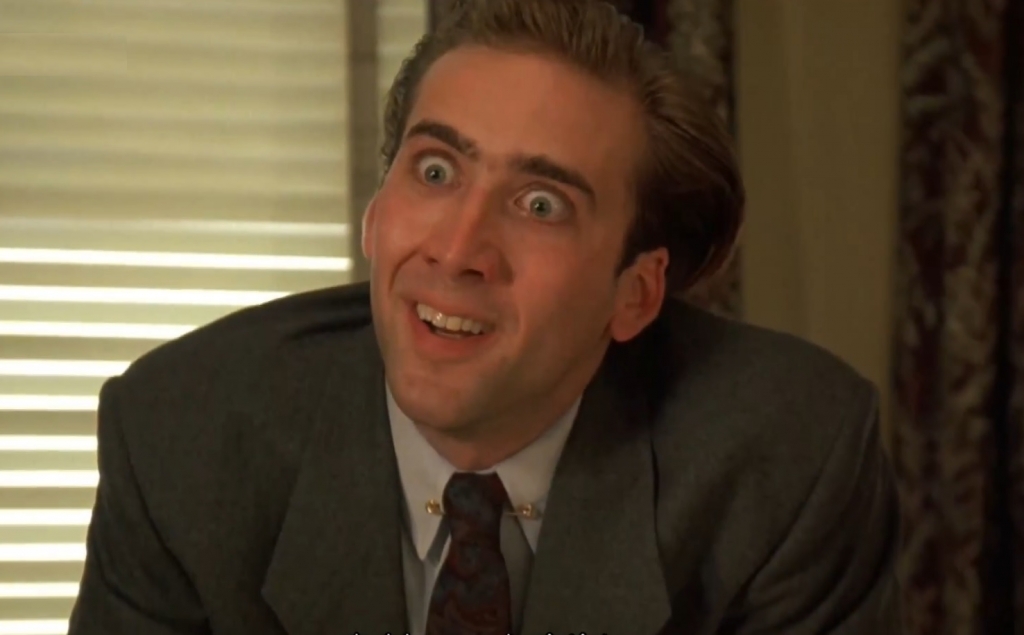 He is entitled, greedy, relentless, unchecked, and takes whatever he wants from whomever he wants.

He is one of capitalism’s most odious creations, a beast who grows stronger by feeding on the exploitation of those socially beneath him. He lives and thrives in a system in which wealth and power are concentrated at the top, and so-called “trickledown economics” means only a few measly drops for those at the bottom.

American capitalism in particular was founded on and perpetuates white male dominance, a fact that is readily apparent in Peter Loew’s universe. Despite his psychiatrist’s status as a highly educated professional, arguably someone near the top of the social chain, Loew questions, belittles, and shouts at her in scenes that are hard to imagine playing out the same way with a male therapist.

It’s no accident that the primary target of Loew’s hostility is his secretary, Alva, who is Latina and apparently the only person of color at the company. 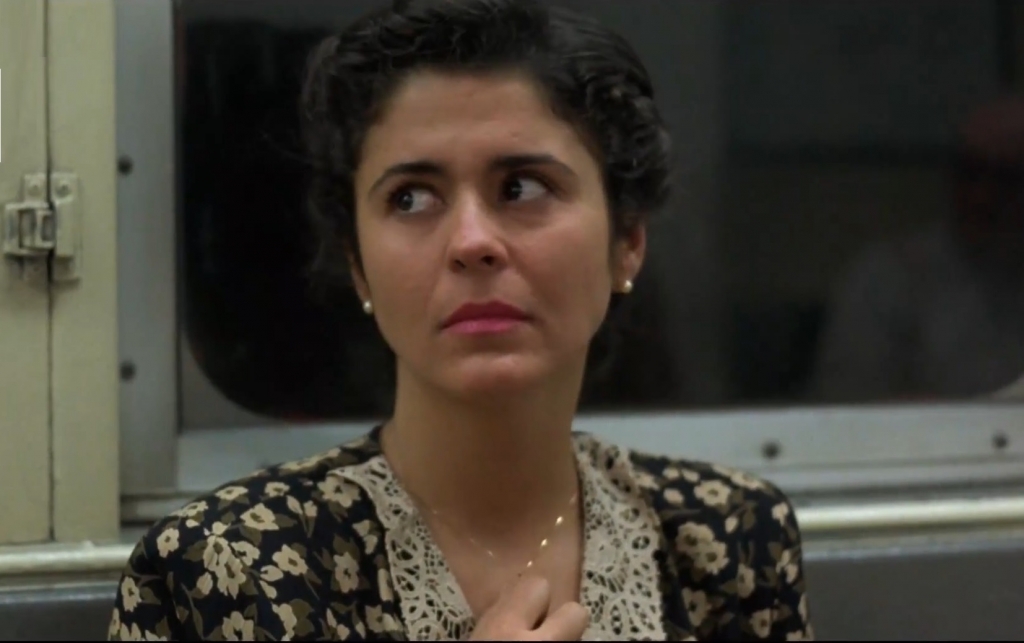 He subjects her to incessant bullying and harassment, including stalking her at her home when she calls in sick in order to drag her back to work.

In perhaps the most iconic scene, Loew makes it abundantly clear what he thinks of Alva, telling her that “I couldn’t think of a more horrible job if I wanted to” and reminding her that she has to do it because she’s “the lowest on the totem pole” and he could easily fire her if she refused.

Loew obsessively tortures Alva, both psychologically and physically, by forcing her to spend days on end sifting through files to find a meaningless contract. This, of course, seems completely reasonable to everyone else at the office. After all, the capitalist system is propped up by an inefficient labor system that disproportionately burdens the working class and glorifies self-sacrifice for the sake of maximizing a profit, even if the worker never sees a dime of that profit.

It’s not really clear what Peter Loew does all day to earn the salary that affords him his swanky Manhattan apartment. From one of his more colorful rants in which he struggles to understand how a document could be misfiled, it’s clear that he has “never misfiled anything” in his life, probably because he’s never actually had to file anything in his life.

Meanwhile, Alva is expected to work overtime until her eyes hurt and spends the rest of her day on an arduous commute to the outskirts of town. 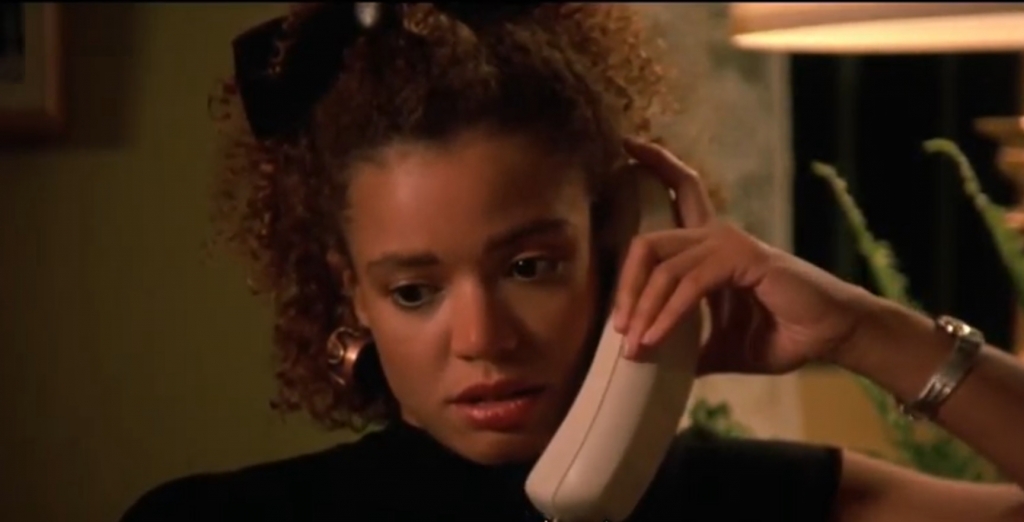 Peter Loew can be found exercising his predatory privilege in his leisure time as well.

Whether intentional or by accident of random casting, Loew seems to have a “type.”

His vampire mistress and the women he is casually dating, Jackie, are both Black. But let’s not be misled into of thinking this makes Loew one of the more open-minded yuppies of his time. There is a long history of white men using and exploiting Black bodies to satisfy their own desires, and Loew is no exception.

It’s clear that Loew sees himself as having control in his relationship with Jackie. He feels entitled to her time and attention, easily blowing her off when he feels like it, but becoming violently upset when she makes the decision to end things. His vampire lover is portrayed as dominating, demanding, and hyper-sexual, which plays handily into long standing stereotypes about Black women and illustrates how Loew fetishizes and exotifies her in his imagination.

Later in the film, we meet Loew’s actual dream girl: a blonde white woman named Sharon who happens to be interested in exactly the same things he is.

The truly frightening takeaway from the story is that everyone puts up with and enables people like Peter Loew and the system that empowers them simply because it seems normal. 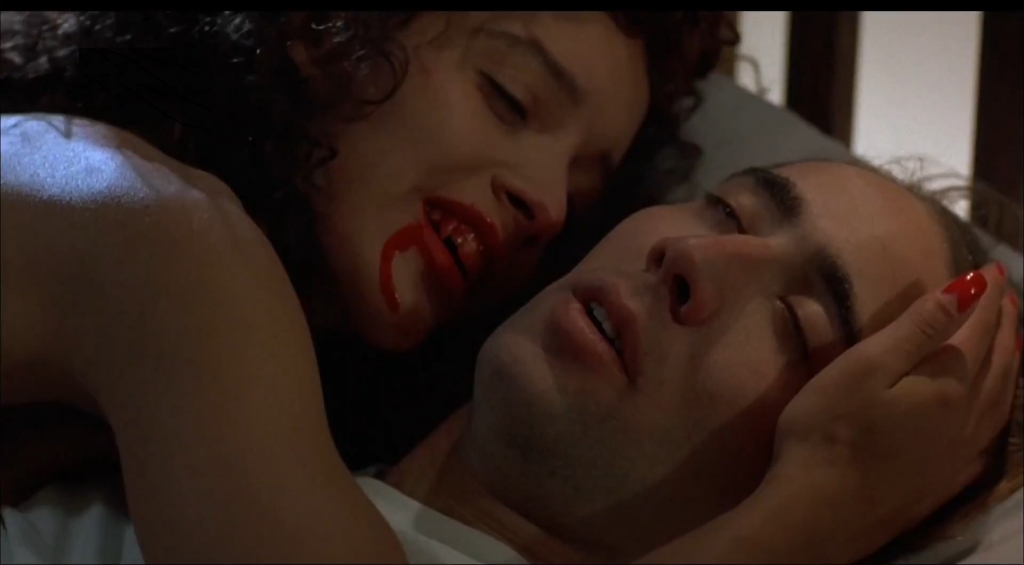 People at the top have arbitrary and undue power over “subordinates” that is rarely questioned.

In one scene, Loew sits around a conference table with the other company men having a good laugh about his outrageous misbehavior towards Alva, while they crack jokes about giving her a raise (it’s significant that there’s a whit