An exercise in absurdity and silent film era expressionism, transplanted into 1980’s Manhattan, “Vampire’s Kiss” is a must watch. 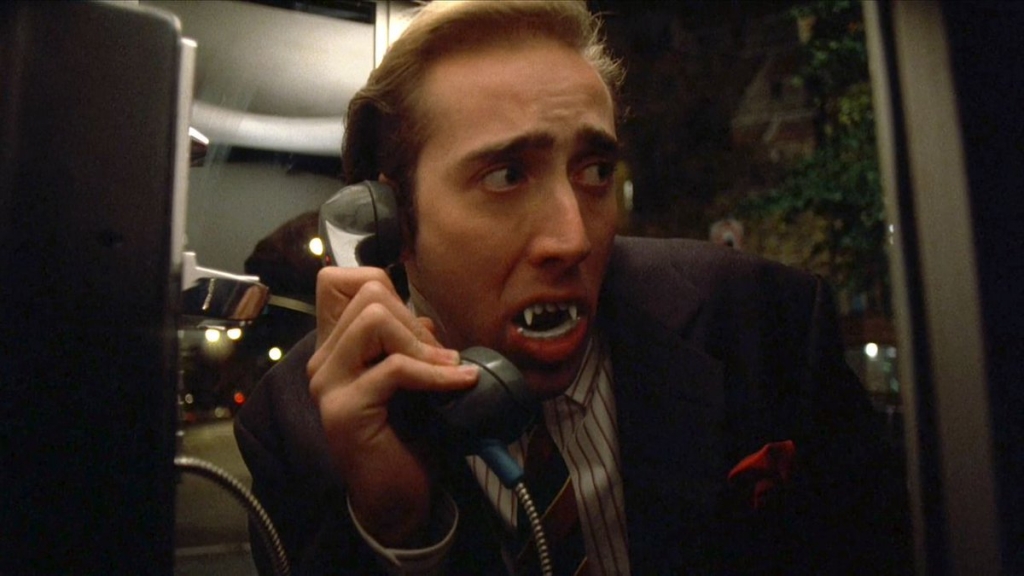 I knew of this film for a while, but I must admit I had never tried to watch it or even read about it. The sole bit of information I had was that the famous Nic Cage meme was from this film. So, going into this, I had no expectation other than I was going to see a trademark Cage wide-eyed and intense performance. What I left with is an even greater appreciation for one of the most thoughtfully intentional actors ever, and I’m now able to put his entire career into a more fitting context.

Let’s grab a trowel and start digging, because this one is properly anchored in situ and will require some careful excavating.

Yes, this is a Vampire flick, but like Larry Fessenden’s Indie magnum opus Habit (1995), there is a lot more to chew than neck flesh. Whereas Habit was an allegory for addiction, Vampire’s Kiss wraps its fangs around mental health and existentialism. Using the metamorphosis from day walker to blood sucker in this manner – with a focus on the cerebral aspect rather than the flashy effects, blood, and violence – afforded Cage to explore every corner of his psyche. 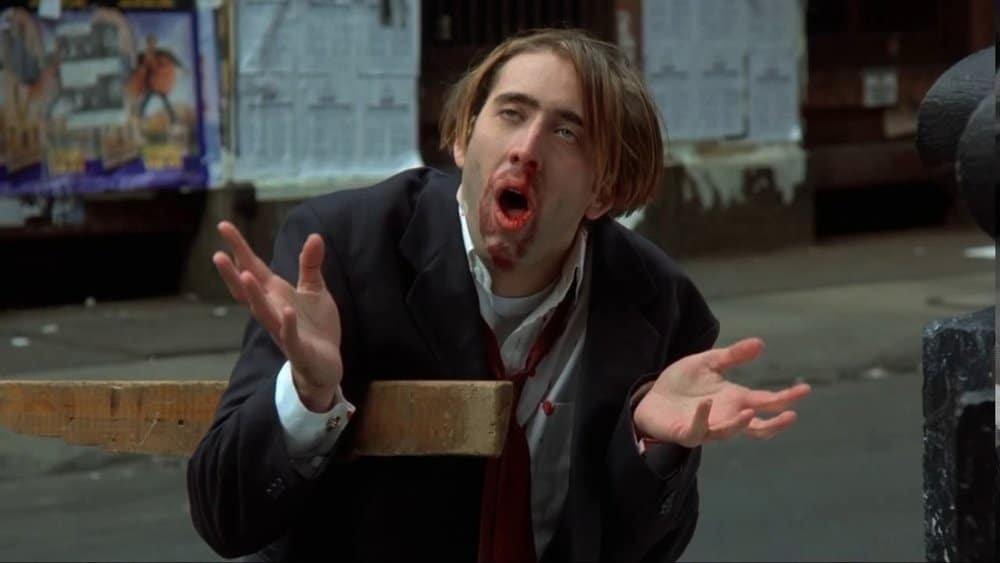 Many will call it “over acting” but I would classify it as comprehensive acting.

This study in mental health builds a desperation that anyone struggling with their own pitfalls and demons could recognize. The absurdity of believing yourself a Vampire is lightened exactly because of the performance. The transmuting diction. The puerile mood swings. Even the neatness of his hair all symbolizes the waves we as humans ride every day.

Peter is exceptionally mean to his assistant, which is an understatement as he ends up raping her. But what verifies the intent of this sadistic descent is a scene at the end of the film, while he opens up to his therapist who has just set him up with another patient. He cavalierly tells her he raped someone and murdered another. His hair is neat. His clothes pressed. He’s together. That’s inter-cut with a bloody faced, messed-hair, loose tie, and disheveled Peter as he speaks to a lamp post. 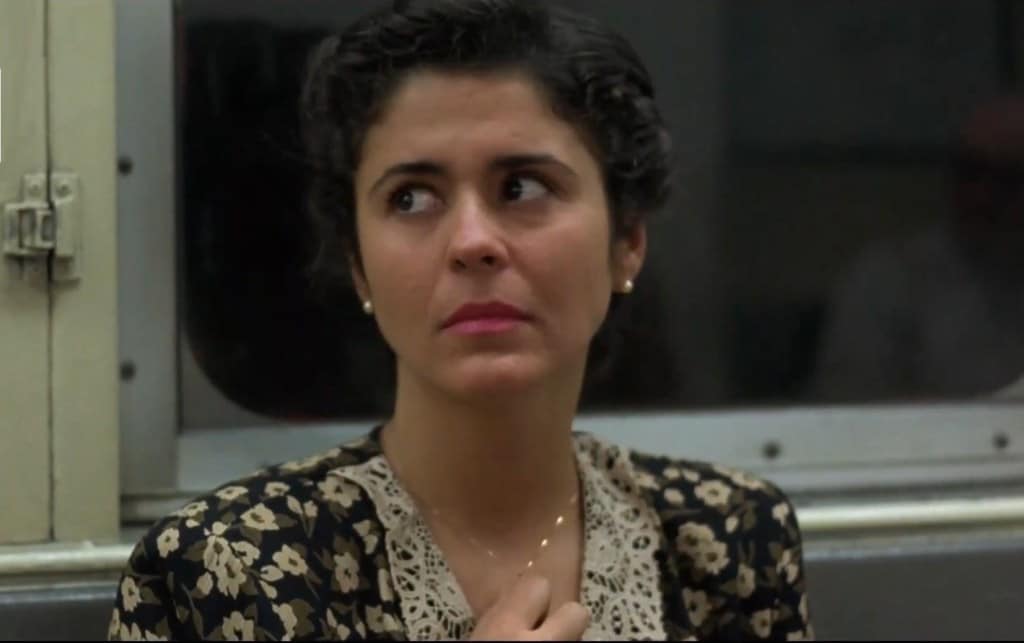 His line about only needing love, as if it’s the one cure-all for his life, reveals a major flaw within our species. The belief that on the other side of the door things are better. If you only had that money, that girl, that guy, that car, that house, that baby, that wedding ring, all your woes would disappear. It ignores the cancer that lies hypogeal, ready to sprout and infect. He filled his life with one-night stands and booze and the apparent conversion into vampirism. His desire for the girl who bit him may reveal quirks and insanity, but they were always there, lurking. Without addressing his true issues, a vampire is exactly what he becomes, on society and those around him.

Stepping away from the poignancy, the plastic vampire teeth was a riot, as was the black leather couch coffin. Great window dressing.

Cage commonly refers to Vampire’s Kiss as his favorite of his own films, and it’s easy to see why. It was a breeding ground for what he would turn into a successful career that keeps maturing. Beyond his memetic value, his worth is in his reverence not just for film but the craft and process behind it. 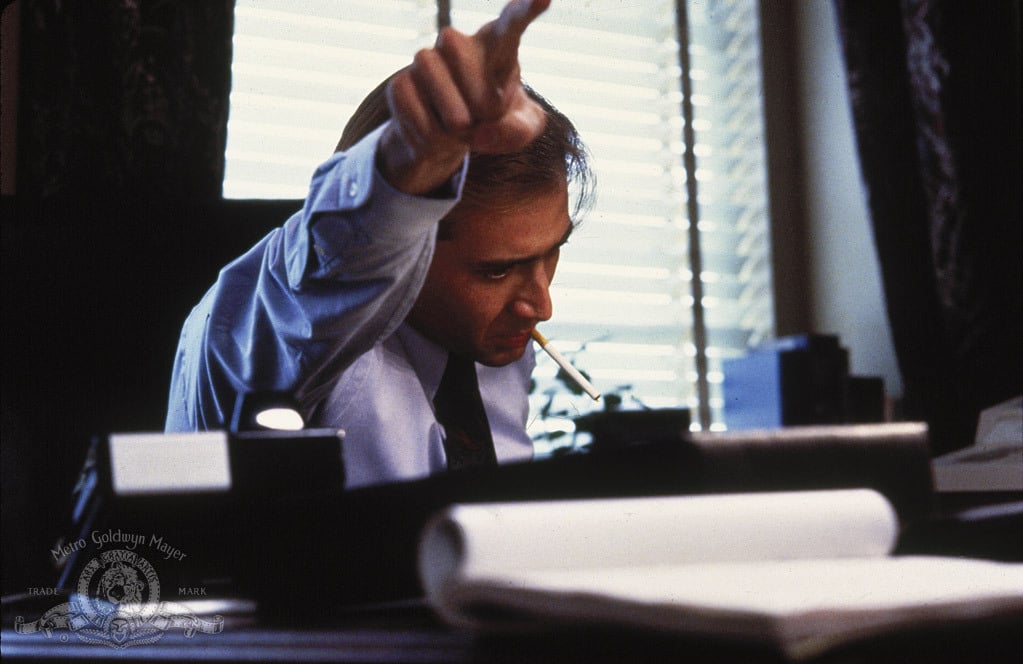 Maria Conchita Alonso is one of the most bad ass women to grace the action screen. In an era of steroids, cigars, and misogyny, she stood out in films like The Running Man (1987) and Predator 2 (1990). Here, chronologically right between those two films, as Peter’s assistant Alva, she had to subdue her badassery for a more vulnerable role; but she’s still just as effective.

Cage chose to eat a cockroach proper. A scene that wasn’t in the script and no one was asking of him, yet he chose to do it against the wishes of even his own palate. It’s hard to argue with someone that feels their artistic expression requires a certain color of paint, but I’m not sure his performance would have suffered without the cockroach. 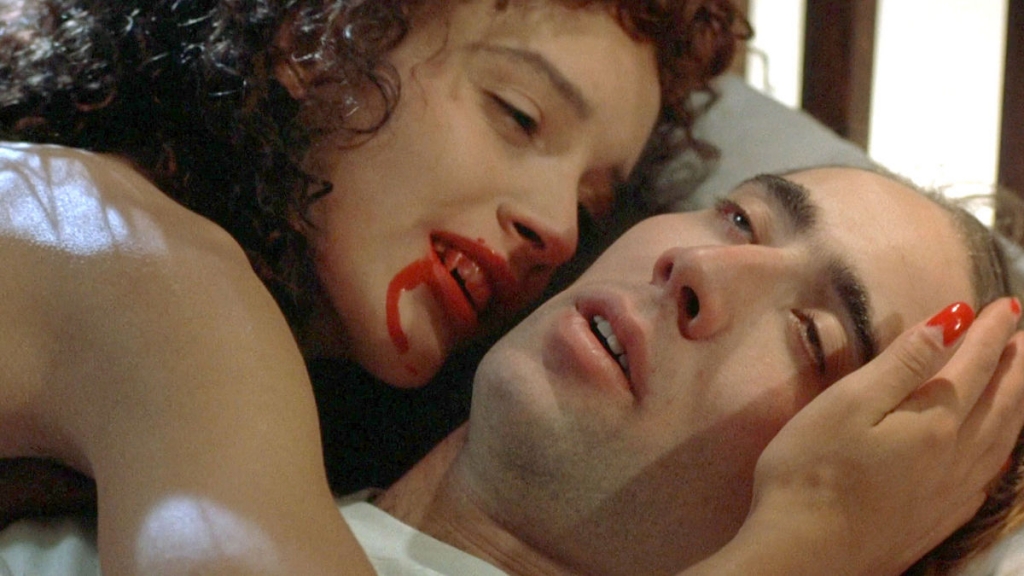 Jennifer Beals, the star of 1983’s Flashdance, seduces Peter into a life of blood and thick sunglasses. The scene where she first bites his neck is erotically realistic thanks to Cage’s palpable breakthrough from pain to pleasure. And it is her use of her skill and aesthetics that pushes it over the edge.

Don’t touch it. Restore the scenes that reportedly were cut by the studio, but don’t touch it otherwise.

Though not directly connected, Cage has stated time and again that Vampire’s Kiss was his rehearsal space. The expressionistic choices he experimented with here he translated to big budget action flicks like Face/Off (1997) specifically. That performance DNA seems to have trickled through his career, much to our benefit.

Vampire’s Kiss is streaming for free on Shudder. It’s the perfect film to cuddle up with this Valentine’s Day weekend.

And be sure to tune into the next episode of the Cheer and Loathing podcast on February 14th to hear Stephanie and Casey debate the merits of Nic Cage and his iconic performance in this film.