Remember when you’d go to the video store and be interested in the same movie weekend after weekend, but for some reason always leave it on the shelf? You’d pick it up every time, read the same synopsis on the back and look at the same 2-3 images from the film. Then one weekend you finally decided to rent it and gave it a shot. And you loved it. You’d think, “Why did I wait so long to rent this!?”

That’s the case with this month’s Staff Pick, the 2017 horror/sci-fi face melter, Sequence Break. I’ve always wanted to check it out. Here we are two years later, and I finally watched it — and really dug it. New indie horror releases will always be a priority with this column, but every now and then attention will be paid to those films that, for one reason or another, were continuously left on the shelf.

With that said, let’s take our monthly walk down the video aisle and pick out some movies to watch! 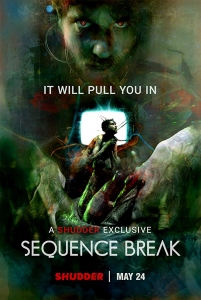 (Available now on VOD and Shudder)

Oz is a bit of an oddball, consumed by his love for video games and passion for repairing old arcade game units at his job. Convincingly played by Chase Williamson, Oz is genuinely a nice person but is quiet, socially awkward, a bit doughy, and seemingly unprepared for life in the long run. So when the spunky and outgoing Tess (Fabianne Therese) enters the shop checking out games, it’s good for Oz that they strike up a friendship that forces him to go out and interact with another person.

Tess showing up coincides with the arrival of a mysterious arcade game, with both functioning as triggers for Oz to experience a life-altering realization. It’s a loaded journey for Oz to get from point A to point B in a mere 80 minutes, but the chemistry between Williamson and Therese works to not only make their relationship palpable, but also to raises the stakes of the film.

Yeah, read that again, this movie is a fucking trip. Let’s leave this one right there, because Sequence Break is definitely worth experiencing for yourself. 3.5/5, Rent it! 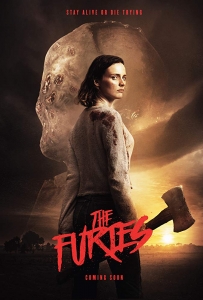 This movie is without question one of the gems of the month, absolutely worth watching! It’s a doozy and one that will leave you begging for a sequel.

The entire setting of the film takes place in a densely wooded area populated with mostly white trees. These white trees give the woods a different look than what viewers are used to, adding to the disorienting lostness the characters are experiencing as they try to survive this brutal place they find themselves in. And this place is brutal.

The girls are being stalked by brutish, sadistic men that resemble monsters more than anything human. Some wear drooping, skinned off faces over their own, while others wear horrific metal masks that seem to be merging with their own face. One man even wears a full suit of skin over his own, meaning there’s a completely skinless corpse laying, rotting in the woods somewhere. 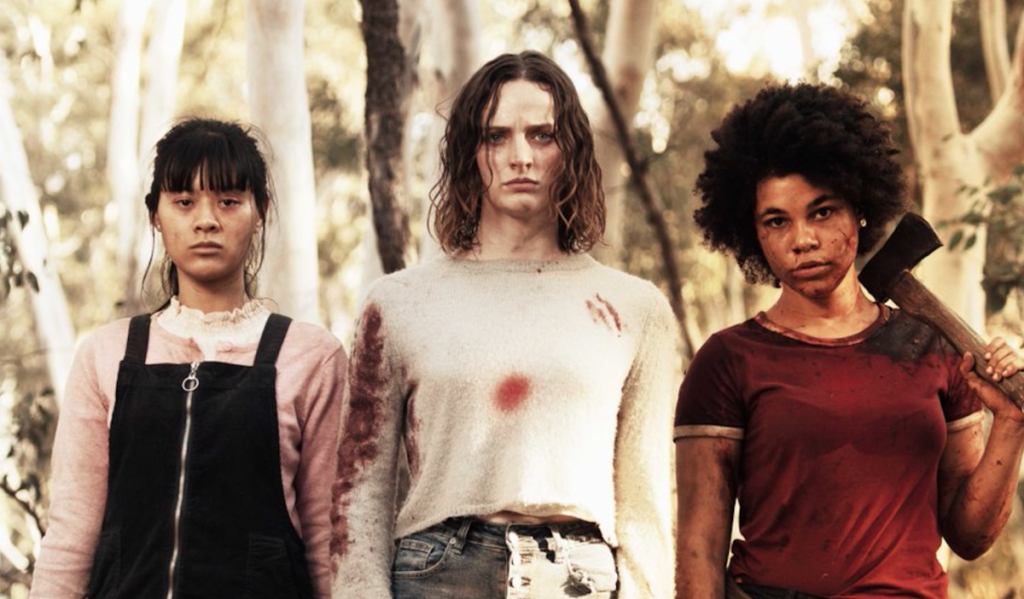 To go along with these nightmare inducing appearances, the film does not hold back on gore and blood.

If there’s a kill with an ax, and there are plenty, you see every flesh ripping bit of it.

The Furies is an exciting, sci-fi/horror fight for survival flick featuring strong female characters who must band together to fight the evil that is hunting them. There’s plenty of drama among the women along the way, these people are strangers after all, and trust doesn’t exist in this place. The cast all around gives strong performances, especially Airlie Dodds as Kayla, who at times is electric.

The Furies is The Hills Have Eyes meets The Hunger Games, taking the most thrilling parts of both films to create a bloody treat for horror fans. This movie is a great reason to give the horror streaming service Shudder a trial if you haven’t already, because it’s treats like The Furies that’ll have you committing for another month after your free trial ends. 4/5, Rent it!

“A woman is kidnapped and finds herself an unwilling participant in a deadly game where women are hunted by masked men.” 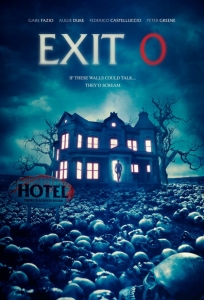 Billy and Lisa are a couple who are clearly not on the same page, a problem that doesn’t seem to have an end in sight as the two travel to a bed and breakfast for a weekend getaway. Strange things begin to happen right away, throwing Billy and Lisa more off center than they already are.

Gabe Fazio plays Billy with a perfect off kilter temperament, giving the character an appropriate nervous energy from the very first scene. Fazio also displays a sensitivity that shows the viewer that, under more normal circumstances, Billy is a relatively level headed guy, albeit with a bit of a trust issue. Augie Duke is the perfect counterpart as Lisa, giving the character an ‘I’m-not-doing-anything-wrong’ demeanor with hints of an unknowable quality. She makes you want to believe Lisa and think that Billy is just a bit insecure. But not knowing which is the case adds an extra level of mystery to the darkness that lies at the center of the story.

When Billy finds an old videotape under the bed in their room, he pops it in the VCR while Lisa takes a bath. Thinking it’s a movie at first, he quickly realizes that it’s showing real people following a couple back to their hotel room and murdering them…in the same room that Billy and Lisa are staying in now. 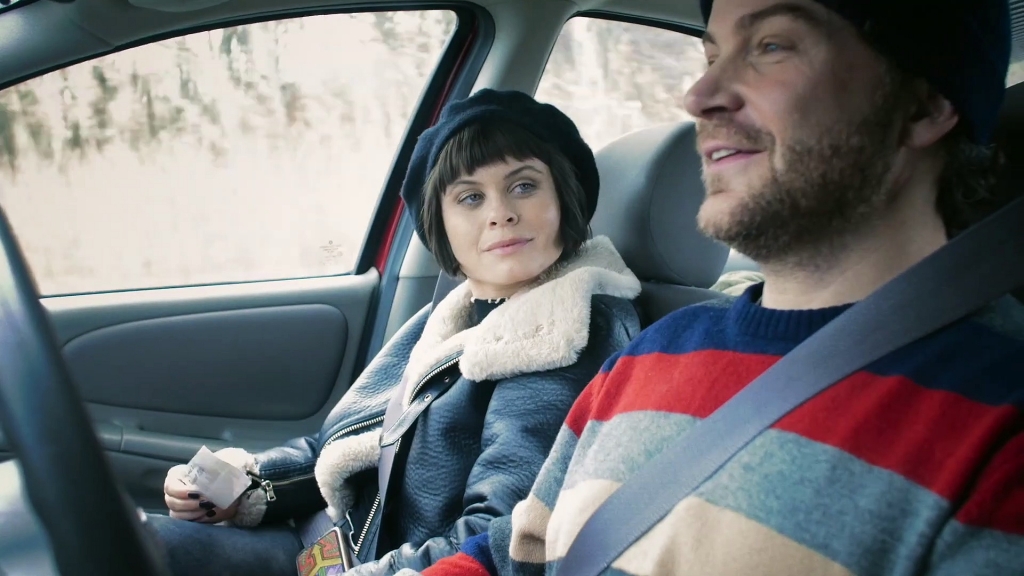 From here Exit 0 creates a paranoid mood that slowly builds as Billy becomes obsessed with uncovering who was behind the gruesome events on that videotape.

Exit 0 suffers from an unfortunate lack of scares or thrills. Events escalate at a decent enough pace, but as the film progresses towards its conclusion and Billy’s growing obsession worsens his mental state, little happens to satisfy the creepy build up in the beginning.

Exit 0 is a middle of the road film, one you’ll find enough to like while watching it, but one you’re not likely to remember much of when the final scene fades to black. 2.5/5, wait for streaming.

“A young couple sets out on a weekend getaway in hopes of mending their failing relationship. However, a seemingly innocent weekend turns dark when the man discovers a videotape chronicling the events of a murder in his very own hotel room from years before.” 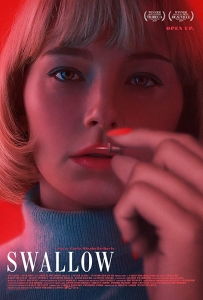 (Available 3/6 in select theaters and VOD)

Wow, does this one look good! Haley Bennett looks incredible in the lead role, and with her character eating these strange objects and being pregnant, I just love how the music evokes the feeling of something growing and bubbling up from within. Swallow feels dangerous in all the right ways and looks impeccably made and thought provoking. Put this film on your radar, seems like one people will be talking about.

“A newly pregnant housewife finds herself increasingly compelled to consume dangerous objects. As her husband and his family tighten their control over her life, she must confront the dark secret behind her new obsession.” 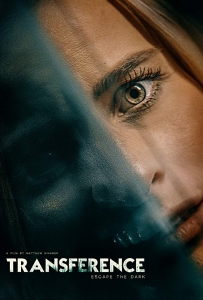 Epic Pictures really churns out some quality films with interesting stories, and Transference looks to continue that trend. This trailer has a little bit of everything: familial drama, anonymous people in creepy white masks, some darkly generated super powers, and a mysterious, Kylo Ren-sounding dude in a pitch black motorcycle helmet. Sounds epic indeed.

“A financially struggling man pays to keep his disturbed sister hidden in a mental facility as he tries to find a solution to their supernatural episodes. But someone has followed their destruction and hiding is no longer an option.” 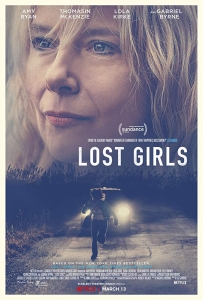 This certainly looks like a compelling story about a woman who uncovers more than she ever could have imagined simply by trying to do the right thing. Amy Ryan returns to gritty, crime/drama form and looks to remind viewers why she was nominated for an Oscar in Gone Baby Gone. Opposite Ryan, watch young Thomasin McKenzie, an incredibly talented actress on the rise.

“When Mari Gilbert’s daughter disappears, police inaction drives her own investigation into the gated Long Island community where Shannan was last seen. Her search brings attention to over a dozen murdered sex workers.” 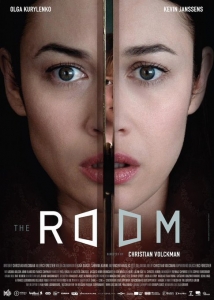 No, not that The Room. This is a new sci-fi mystery starring Olga Kurylenko, an actress I’ve been a fan of for a while now. This movie has a nice Twilight Zone-like hook, and the trailer really plays up the escalation of horror that comes with breaking the rules of fantastical forces. The Room looks eerie, wild, and unpredictable. And on March 12th, I know what I’ll be watching.

“While moving into an isolated house, married couple Matt and Kate discover a strange room that grants them an unlimited number of material wishes. But, since Kate has had two miscarriages, what they miss the most is a child.”

KEEP AN EYE OUT FOR THESE 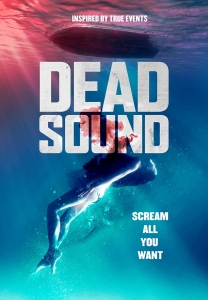 Based on true events. Those words preceding a film like this will always send a chill down my spine. Knowing people actually went through something similar to this is so unsettling, and automatically adds an extra level of fear. I can’t say that Dead Sound looks particularly great based on the trailer, but it could be an easy way to pass a couple hours if you have time to kill.

“After missing the last ferry to attend a massive high school graduation party on Block Island, four friends decide to hire a fishing boat to take them on what should be a simple journey. What they get is the trip from hell with a deranged Captain and first mate, and the kids have to fight to survive to simply make it back to land… any land.” 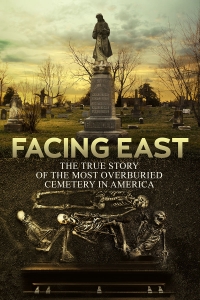 This documentary explores a deeply upsetting subject about a cemetery reusing and reselling graves. One lady admits to using tarps to cover up the many skulls in one grave! Absolutely despicable stuff. The film itself looks to be a little dry and not the best quality, but  it does appear to be well researched, and I think that’s enough to overcome any visual shortcomings. Besides, it’s such an unthinkable topic that it’s instantly compelling.

“With over 100,000 documented disturbed burials, the owners of Eastern Cemetery re-used graves over and over, taking advantage of low-income families during one of the most difficult times in their lives. 25 years after the cemetery was abandoned, the Friends of Eastern Cemetery was formed to provide care and upkeep the cemetery desperately needed.” 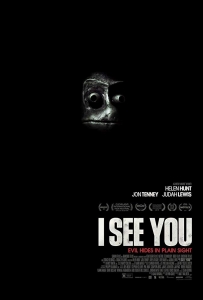 This movie came out in December on VOD, but its upcoming addition on Amazon Prime streaming makes it more accessible, so I included it here. Plus, it looks really freaking good! Academy Award winner Helen Hunt adds some gravitas to this dark and intense film that looks really well made. I’m looking forward to finally catching up with I See You, and you should too.

“Strange occurrences plague a small town detective and his family as he investigates the disappearance of a young boy.”