Trucks are monsters of the road, roaming America’s pavement like sharks. Tractor trailers and the open road are the stuff of Americana legend, so much so that  a niche sub-genre in American cinema featuring the giant machines was created.

These 2 decades were the height of the trucker movie as special effects in the 1990s made dinosaurs and aliens more enticing to audiences than big rigs.

But it was 1997’s Breakdown starring Kurt Russell and 1998’s Black Dog with Patrick Swayze that worked as a one-two punch swan song marking the end of an era: the practical effect, open road, big rig, action flick.

Fill your tank, kick the tires, grab some No Doz and buckle up or one hell of a double feature. 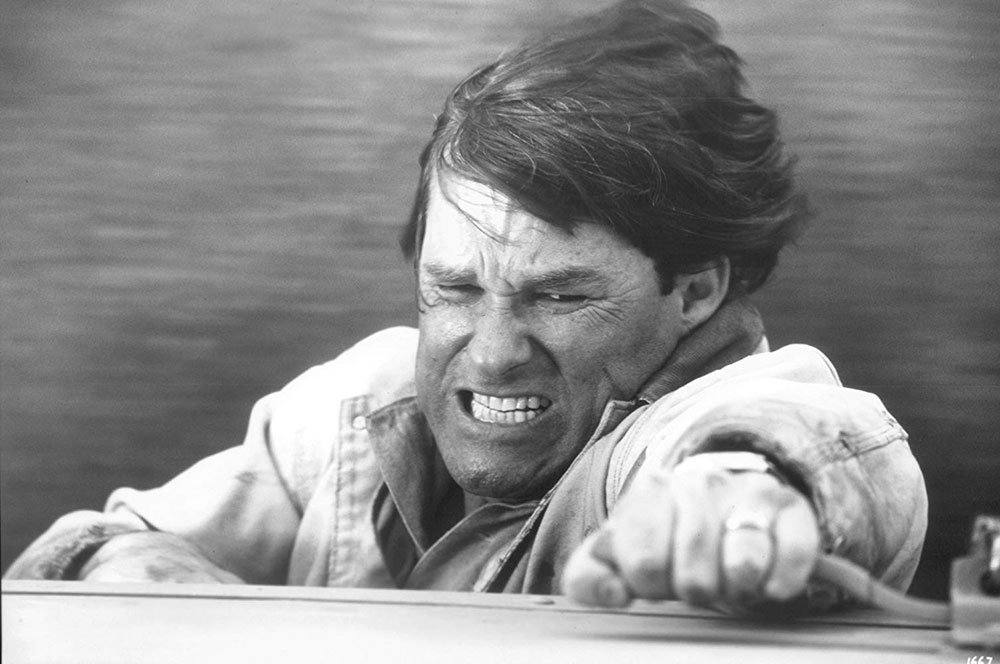 When Kurt Russell’s character, Jeff Taylor, looks at the trucker who gave his wife a ride to the nearest phone after their car broke down and asks, “What are you doing,” his voice is shallow with bewilderment while his face radiates a mixture of fear and panic.

It’s a great moment for Russell. And while a who’s who of 1990’s leading men were considered for the role — including Mel Gibson, Bruce Willis, Ed Harris, Dennis Quaid, and Richard Gere — it’s Russell’s ability to genuinely connect with the average person that made him perfect for the part.

The “What are you doing” moment comes as Taylor finds the trucker and flags down a cop to help find his missing wife, who he last saw take a ride with the trucker while he stayed with their broken down vehicle. 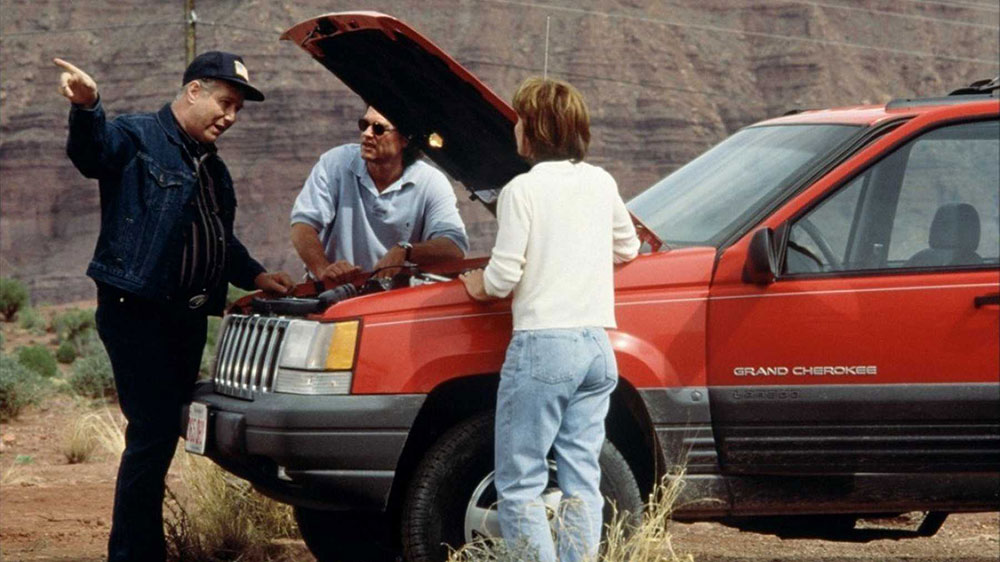 From here, Breakdown takes off and unfolds as one of the best thrillers of the decade and one that induces anxiety with every viewing.

J.T. Walsh is one of “those guys,” the actors you see and say, “I know that guy,” but aren’t sure of his name.

And in the 1990s anyone who went to the movies definitely knew Walsh, as he was one of the actors with the most acting credits of the decade, having appeared in 53 films by 1998 before his untimely death at only 54 years old.

In fact, Breakdown was the 4th time him and Russell worked together having co-starred in Tequila Sunrise (1988), Backdraft (1991), and the 1996 action/thriller Executive Decision. 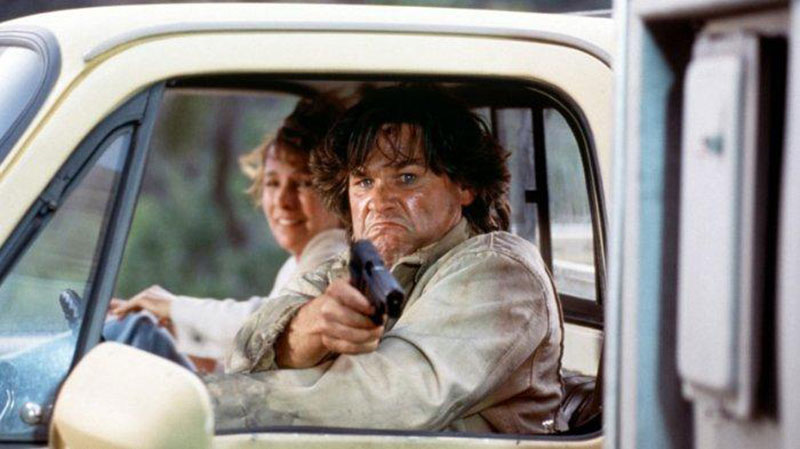 Opening on May 2, 1997 to $12 million and trucking its way to a $50 million domestic haul, audiences showed up for Russell as the everyman in trouble.

It wasn’t Russell’s first time in a role like this, as audiences approved of similar films like 1992’s Unlawful Entry and the aforementioned Executive Decision.

Adding to the everyman feel was the very Hitchcockian score from Basil Poledouris, giving the film an added suspenseful edge of a man in over his head. As good as the score is, the first one Poledouris submitted was actually rejected.

Russell and the score aside, Breakdown‘s script managed to turn a contest to win $90,000 or 90,000 donuts on the back of a sugar-loaded, preservative-injected package of gas station donuts into a lifeline between 2 characters. And any movie that can do that deserves a decent amount of respect.

Russell succeeds, and in turn Breakdown succeeds, because his character is an average guy on the hunt while being watched, trying to figure it out as he goes. He needs to be smart, causing his struggle and anguish to be internalized out of fear of giving up his position or losing his cool and blowing everything. 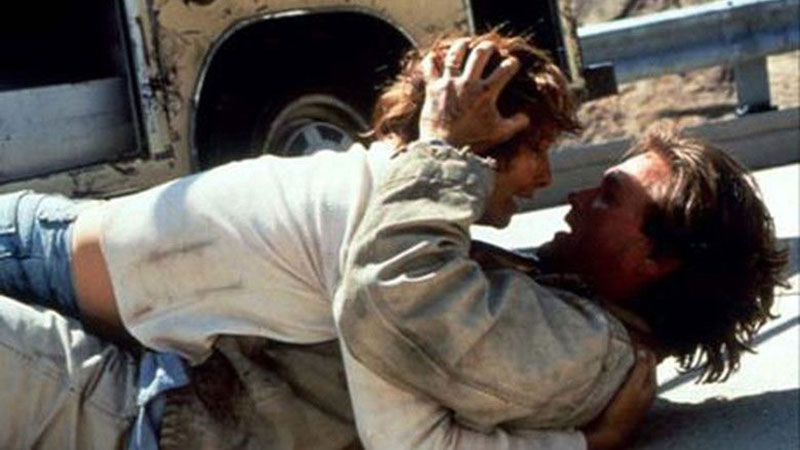 Russell excels at this kind of acting and his performance makes each scene that much more intense.

In the scene where Jeff Taylor sees his wife from afar for the first time since losing her, she is laying still under a sheet. Taylor’s anguish at the possible death of his wife in that moment is almost unbearable to watch.

He can’t make a sound or he will be found out. And Russell shows a man on the brink of full collapse, his blue eyes filling with desperation and his face reddening with potential oncoming shock. When his wife moves, the release and relief on Russell’s face allows the audience to exhale without even realizing they were holding their breath in the first place. 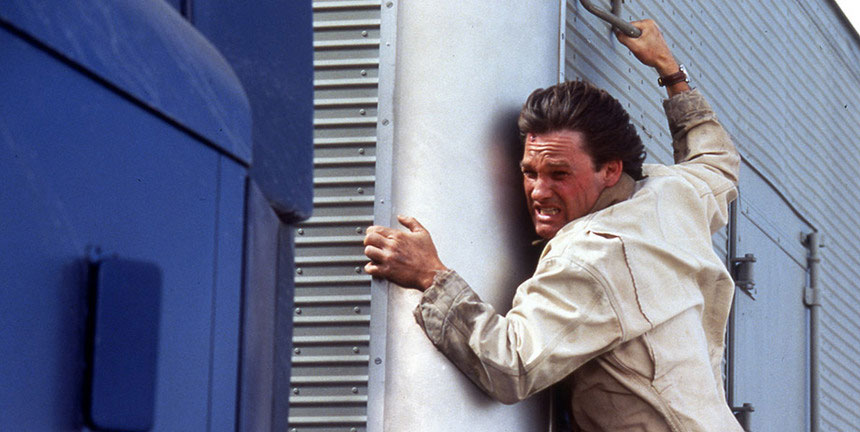 The final sequence where cars are exploding and tearing through tipped over semis is insane action, with jaw dropping practical effects and stunt work.

What’s best about these action scenes is that Jonathan Mostow’s direction does not distract from the action. It’s more or less a ‘capture the scene’ approach that works beautifully here. It’s also these scenes where we get to see Kurt Russell unleash his crazy side where his eyes reach a dangerous level.

Amped up Russell is so damn good and is so damn fun to watch, he oozes intense energy with every movement.

The final “fuck you” to the bad guy belongs to Taylor’s wife, Amy, (Kathleen Quinlan) — and it’s a doozy.

In the closing moments of the film, the evil trucker lays bruised and broken in a rocky river bed having been defeated by Jeff Taylor and thrown off a bridge in a fight that included chains and a truck steamrolling a car.

The trucker’s big rig hangs perilously from a busted side rail above him as he slowly turns his head and looks up at Taylor. As the camera closes in, we see Russell with an incredulous look on his face…will this fucker ever die? Just then, Amy reaches in the semi and slams it into drive, the tires skidding and driving the truck off the side of the bridge falling directly onto J.T. Walsh’s trucker.

If you ever find yourself in a movie, you don’t fuck with Kurt. Or his wife. 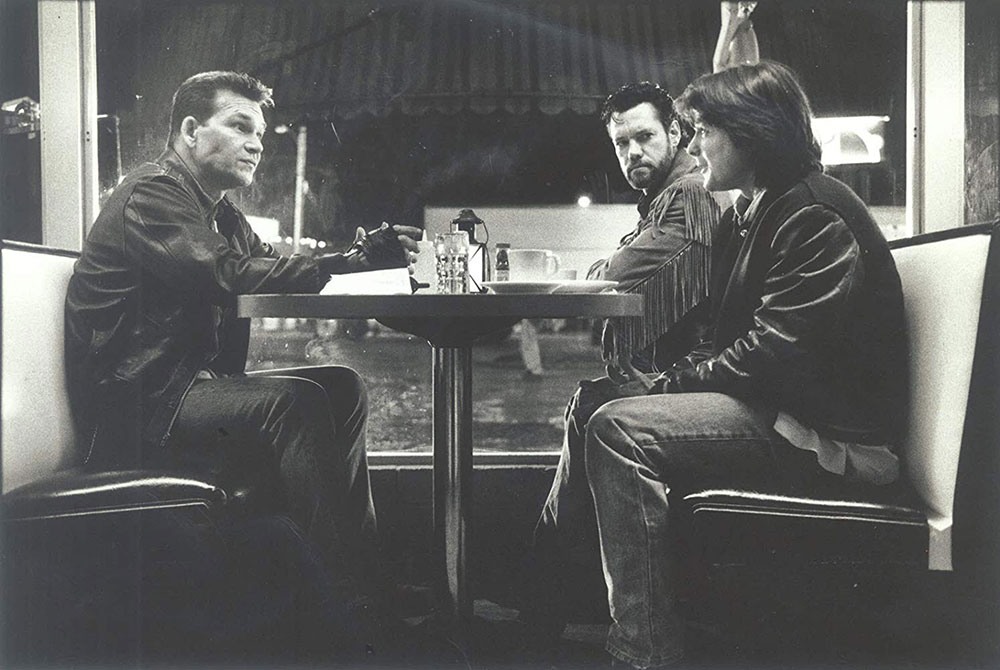 Patrick Swayze got the call to star in Black Dog after its original star, Kevin Sorbo, had to withdraw from the production due to illness.

Sorbo had a 3 picture deal with Universal Pictures in a push to turn the Hercules: The Legendary Journeys actor into the next action star, with Black Dog being the 2nd of the 3 pictures. But after the box office failure of Kull The Conqueror and withdrawing from Black Dog, there never was a 3rd film.

Swayze was a proven action star with hits like Roadhouse and Point Break on his resume. But by 1998, a string of box office misfires derailed the star’s career. And while Patrick Swayze returning to action created an early buzz, Black Dog lacked teeth at the box office grossing only $13 million domestically on a budget of $30 million.

The film was, unfortunately, the last studio film built around the talented actor. And the fact that Black Dog was released on May 1st, 1998, a year later on the same weekend as Breakdown, hints that the studio was hoping for similar box office success. 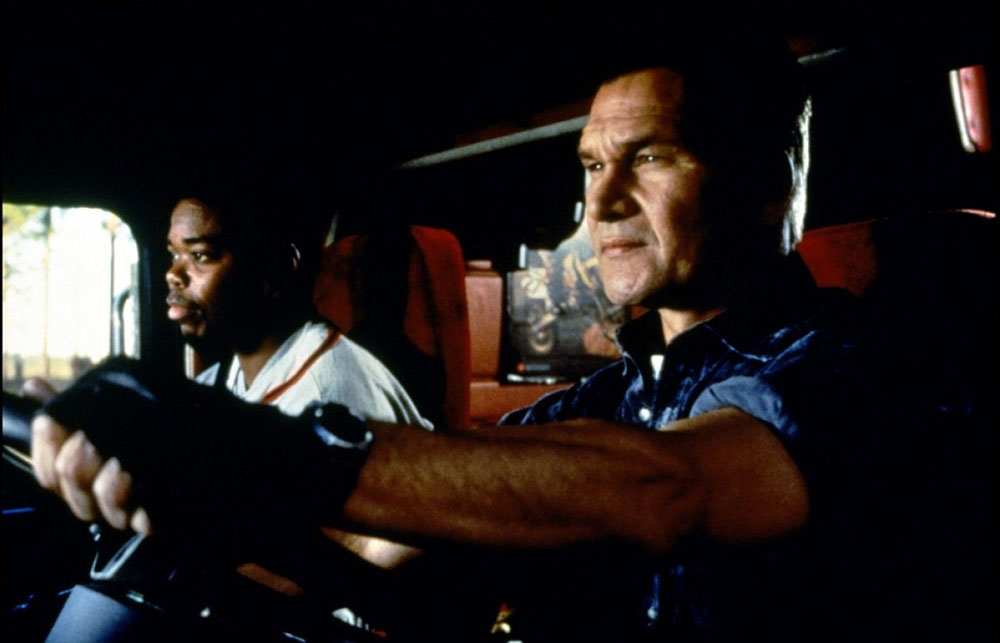 Black Dog does have its defenders and has gained minor cult status, largely because it somewhat marked the end of practical effect and stunt work driven big rig action road movies.

The mid 1990s marked the start of the CGI, special effects-laden Hollywood spectacle. And Black Dog relied on gritty practical know how to deliver the goods.

One such sequence is a multi-truck race down the highway that works like the chariot scene in Ben-Hur, a thrilling big rig fight on the open road. Another scene has Swayze fighting on the back of a speeding rig, a carefully choreographed, tough guy segment that clearly shows him doing a lot of his own stunt work.

Swayze pulled off this action flick just 8 months after breaking both of his legs and his shoulder in an accident. That’s an incredible feat that shows how dedicated the actor was to his craft, especially knowing that his shoulder wasn’t fully healed. 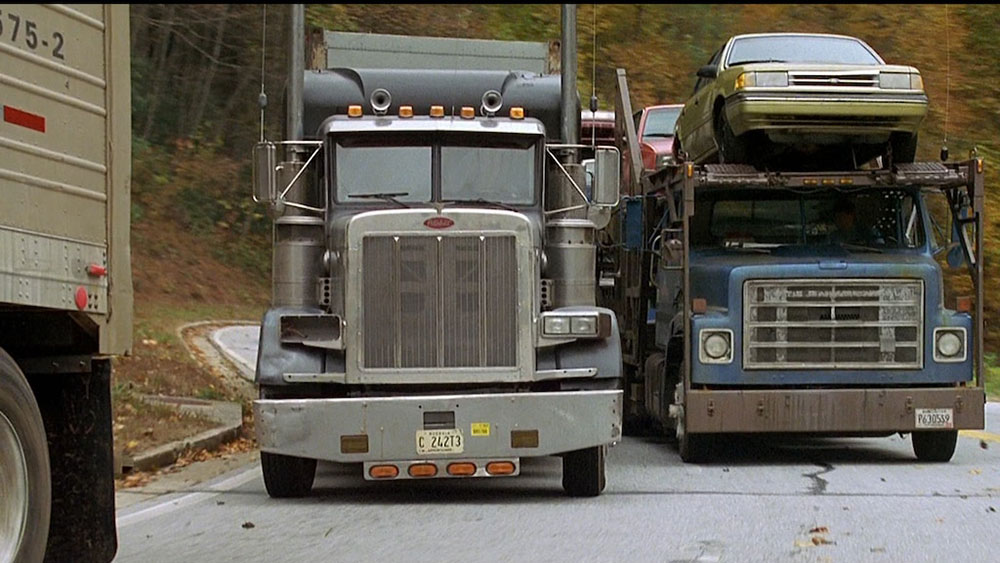 When it came to the big rigs, Swayze already knew what he was doing.

He used to haul trucks overnight as a young man, so Swayze knew how to drive them. He just took a refresher course before filming to learn how to properly handle the truck he’d be using on screen. That’s a tough guy right there, perfect for the role of Jack Crews, a trucker hauling a mysterious load to get a big payday to keep his family from being evicted from their home.

Other aspects of Black Dog that make the film a fun watch is Meat Loaf hamming it up as the nutty, religious villain. Every scene gets chewed and spat out by Meat Loaf whenever he is on screen, an over the top, snarling performance that meshes well in this no holds barred world of crooked manly men.

Character actor Stephen Tobolowsky and Charles Dutton as the odd couple of ATF and FBI agents after Crews and his not so legal haul play wonderfully off each other and make for a surprisingly good acting duo. 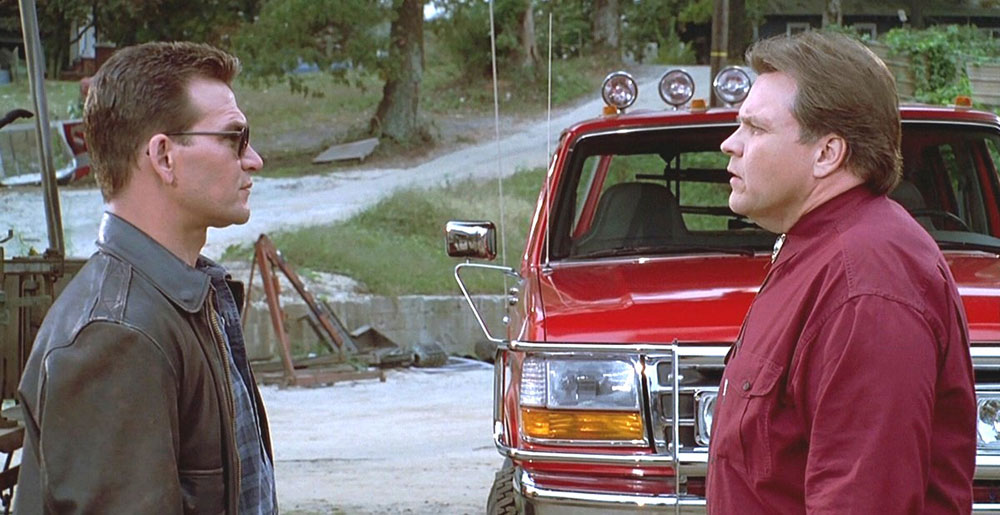 It’s a great cast that plays up the B movie feel of Black Dog and helps make it tolerable as a film that knows it’s not that good — but its got big fucking trucks, so who cares?

The ‘Black Dog’ legend at the center of the story is the real interesting part of the film, but it’s unfortunately minimized to a simple 3 minute scene and is ultimately wasted.

As the legend goes, the ‘Black Dog’ is essentially a sleep deprivation-induced supernatural creature that haunts truckers on the road who have been driving too long. It’s a warning of sorts for them to pull over and rest, a warning that Jack Crews ignored a number of years ago with deadly and life-altering consequences.

This would be a damn cool thing to explore further. Let’s get more of this supernatural black dog involved in the story! Despite being the title, the ‘black dog’ doesn’t serve that much purpose.

Every scene in Black Dog feels like a scene from a better film.

Even the music feels like a generic, action TV show soundtrack.

But it is precisely this sheer audacity of mediocrity with over the top, snarling bad guys and tough talking anti-heroes that deems this trashy cinema entertaining as hell, and a solid tough guy flick. 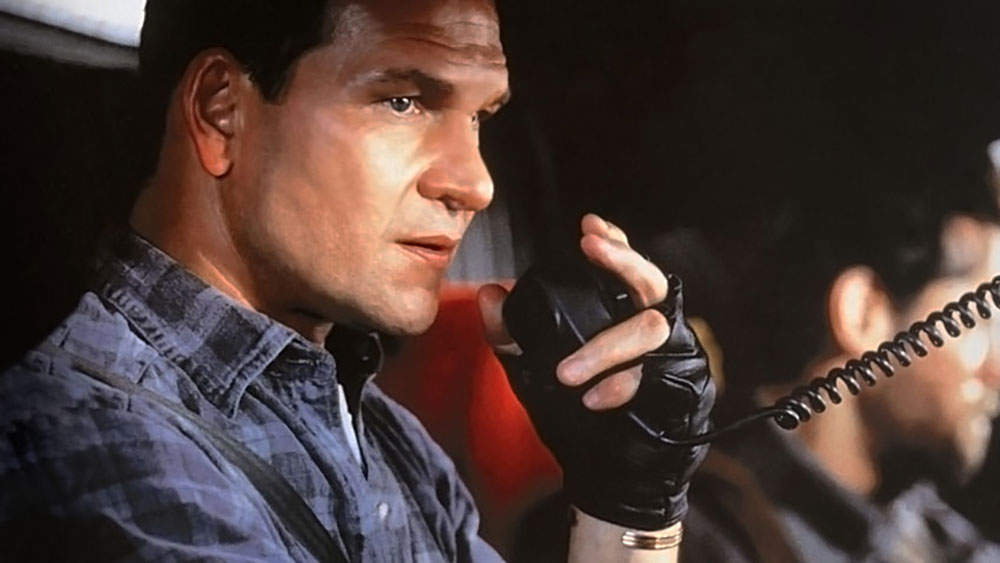 Greasy garages, the open road, and of course the loading docks at night. Generic thriller 101 stuff sure, but trashy action lovers relish in that sense of familiarity — just like slasher fans love an endless stream of boobs and blood.