We interview the talented, up-and-coming indie horror actor Roger Conners about his blossoming career, his love of horror and his ‘scream queer’ status. 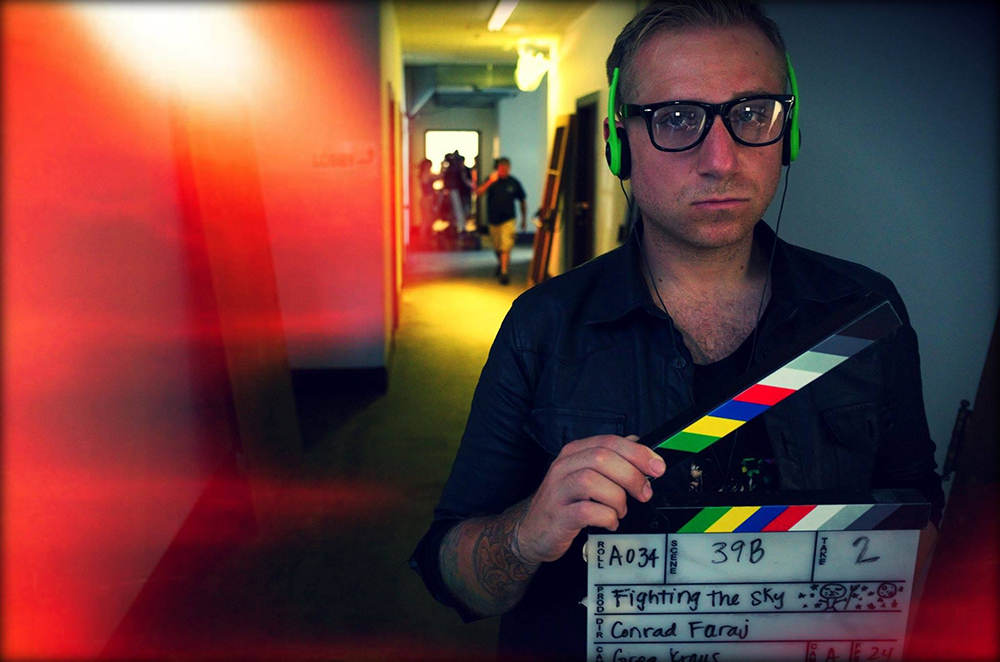 I recently had the pleasure of interviewing Roger Conners. This is a man dedicated to his craft, and he is certainly making a name for himself in the indie and cult horror world. He has appeared in a variety of widely publicized b-horror classics. After appearing in an array of independent horror films, Roger was dubbed as being horror’s first “Scream Queer”, a spin on the classic term “Scream Queen”.

I actually had the pleasure of getting to work with him on one of his most recent films, The Curse of Lilith Ratchet. Even though I was only an extra for a few scenes, he made us all feel very welcomed and treated us as nicely as everyone else. 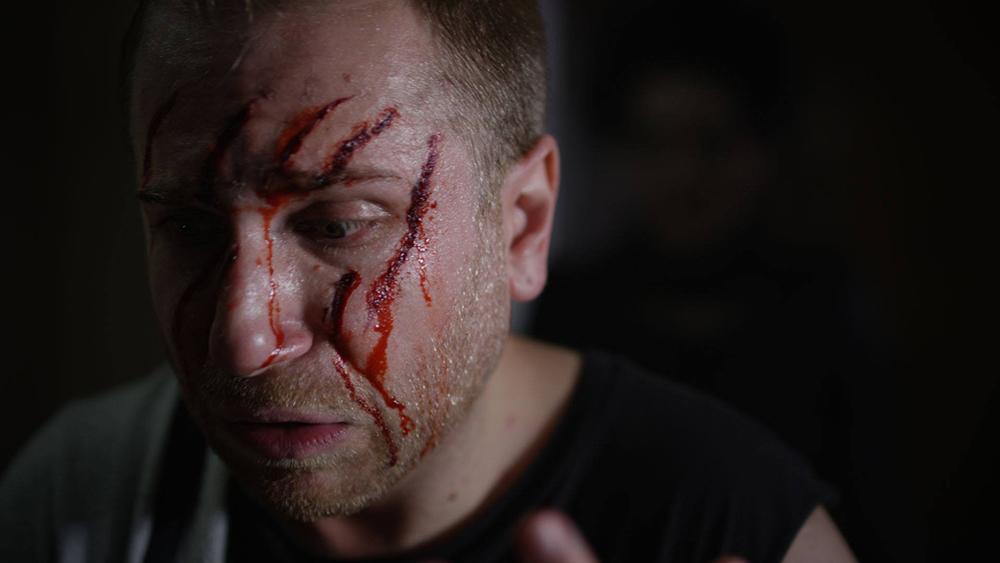 1. Roger, what got you started in movies, and what drives you to be part of so many horror films?

Thanks for taking time to chat with me! To tell you the truth, the reason I decided I wanted to pursue a career in film in general was totally due to my having a massive interest in horror cinema from an early age. I’ve been obsessed with horror movies for as long as I can remember. It all started with my first viewing of Night of the Living Dead when I was roughly 6 or 7 years old. From that point on, I was obsessed!

2. You are well known as being the first Scream Queer. How did this title come about, and how do you feel about it?

That nickname was thought up around the time that I was filming Voodoo Rising way back in 2007, and I never thought in a million years that it was going to stick the way it has. It was honestly nothing more than a cute joke at the time, which is until a few of my blogger friends caught wind of it and thought it could be marketable. They went ahead and incorporated it in some early interviews, and it sort of just took off from there. I absolutely embrace being known as indie-horror’s “Scream Queer”, even going so far as using it as my social media handle on Instagram and Twitter. I think it’s super flattering! 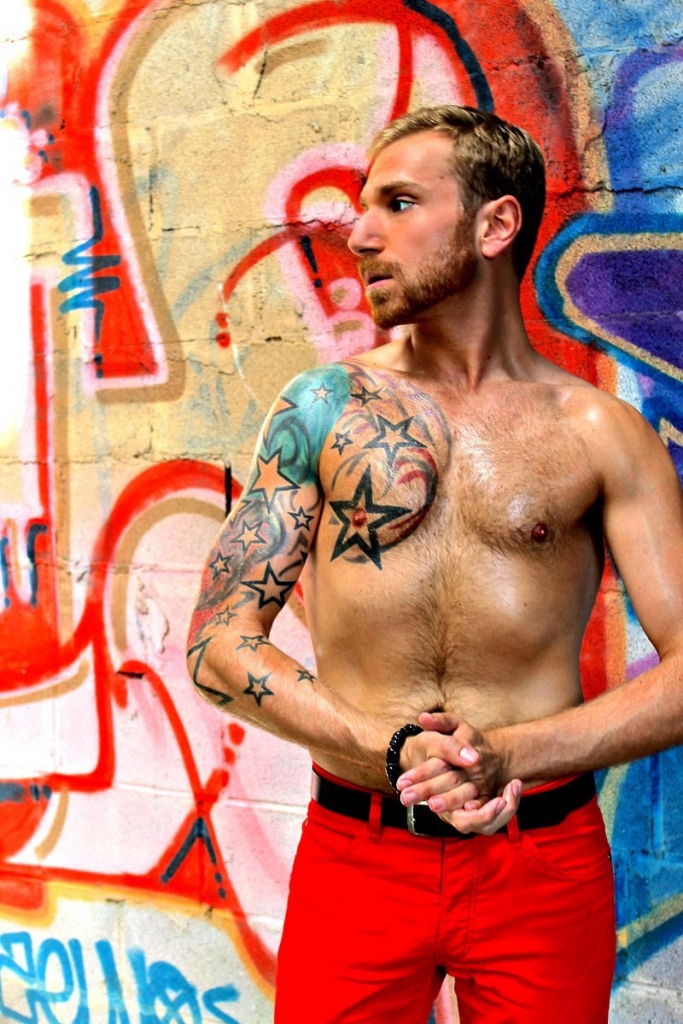 3. Has being an openly gay actor affected your career at all, and is there any advice you would give to your fellow LGTBQ performers?

You know, if you would have asked me this question five years ago, I would have said that being gay has absolutely had a negative impact on my career. I always lived with this fear that, due to my being an open and out gay individual, I simply wouldn’t be considered for mainstream, heterosexual roles. And there certainly was a time there that I really had to prove myself and my talents as an actor in order to win over some of those casting directors who may have doubted my abilities. Luckily, times are certainly changing, and I’m stubborn as all hell!

Fast forward to today, and I honestly believe that, if anything, being gay has actually helped my career. There is a massive gay fan-base out there who are really passionate about these indie films we create, and they’ve really come out of the woodworks and supported me and my projects. I am so very thankful for that!

I’ve had so many wonderful opportunities and have had the chance to play so many unique, diverse, and challenging characters in my time. And the filmmakers whom I’ve been lucky enough to work under know me and my skillset, what I’m capable of, and the talents that I can bring to a set. When it comes down to my being cast for a role, my sexual preference should have absolutely no impact on those talents. I’m an actor. I act. I play roles that are different from me. That’s the point of doing this. That’s the goal! 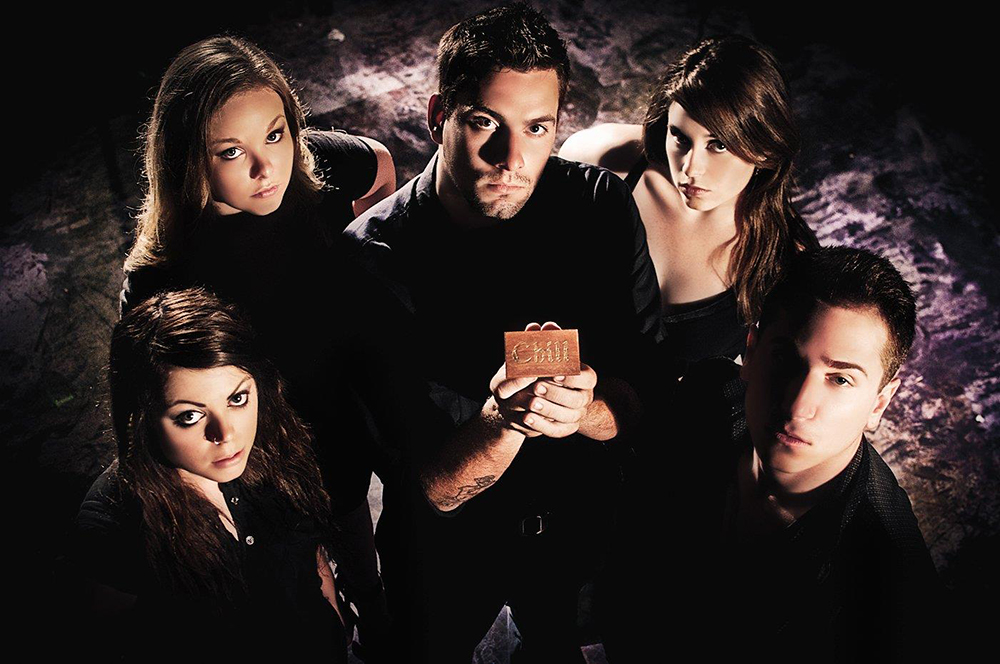 4. What role has been your all-time favorite, and are there any that you would want to give another shot to change?

This is a hard one! I don’t know if I have one favorite role in particular, but there are a few characters I’ve played that remain near and dear to my heart. Kyle from Chill: The Killing Games is definitely one of those roles for me. I loved being able to play an openly gay lead in a film that was necessarily created for or geared toward a strictly LGBTQ+ audience. He’s gay and that’s clear, but we didn’t feel the need to make it a thing. There’s no sex scene, no romantic subplot. We just didn’t go into it because we don’t have to. I really appreciate that about Kyle and about Chill in general.

I’d also have to say that Lady Athena from Mother Krampus 2: Slay Ride stands out to me because she was just so much fun to play. I really got to let my hair down with her, quite literally. Director Eddie Lengyel gave me a lot of creative freedom in that role, so a good amount of Athena’s dialogue is improvised in the moment. I had a great time getting into her mindset and figuring out who she is and how she works. 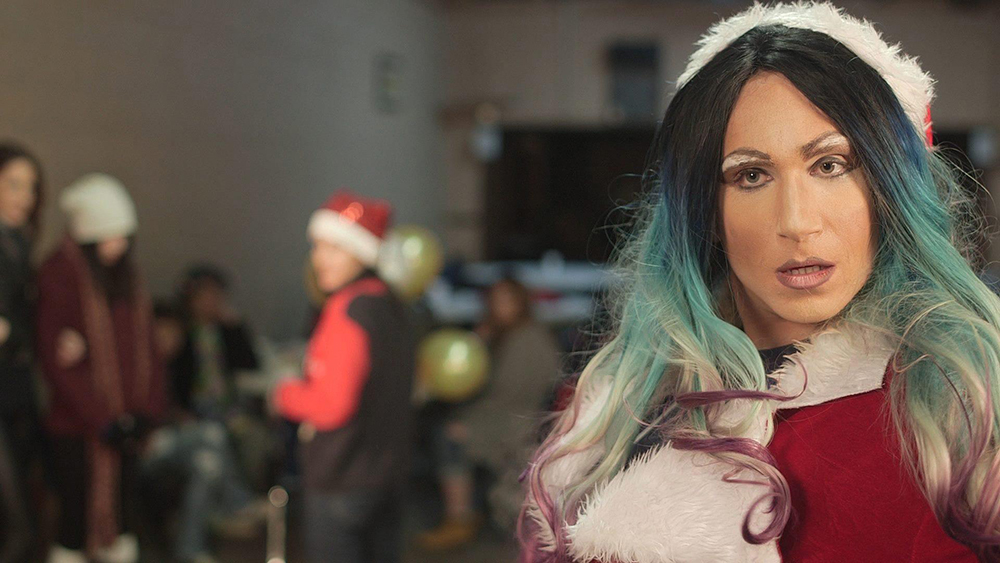 5. Who has been your favorite people/person to work with?

At this point, I have so many close friends in the industry that it would be unfair to list just one or two favorites. However, I will say that having the opportunity to work alongside iconic scream queens like Lynn Lowry and Tamara Glynn has provided me with some truly memorable and all-around surreal experiences. Like, you grow up watching these women on screen and idolizing the roles that they’ve portrayed, and suddenly one day you’re on set filming a scene alongside them and it’s just really mind-blowing. It’s such an amazing pay-off for the years of hard work, you know?

6. If you could star in any horror movie, be it already made or remake, what would you chose and why?

Funny you should ask that, because I actually managed to make that dream come true for myself when I started production on my directorial debut! My very first feature-film is entitled Rebirth, and it’s a full-length fan-film retelling of George Romero’s Night of the Living Dead.

I wanted this project to feel fresh and original while still paying homage to the source material, so we took a few liberties with several of the characters and how they’re portrayed. Nobody has seen the film yet, but my character Adam is completely inspired by Judith O’Dea’s depiction of Barbra in the original Night of the Living Dead. When you finally get a chance to watch it, I’m sure you’ll see what we were going for with that one. 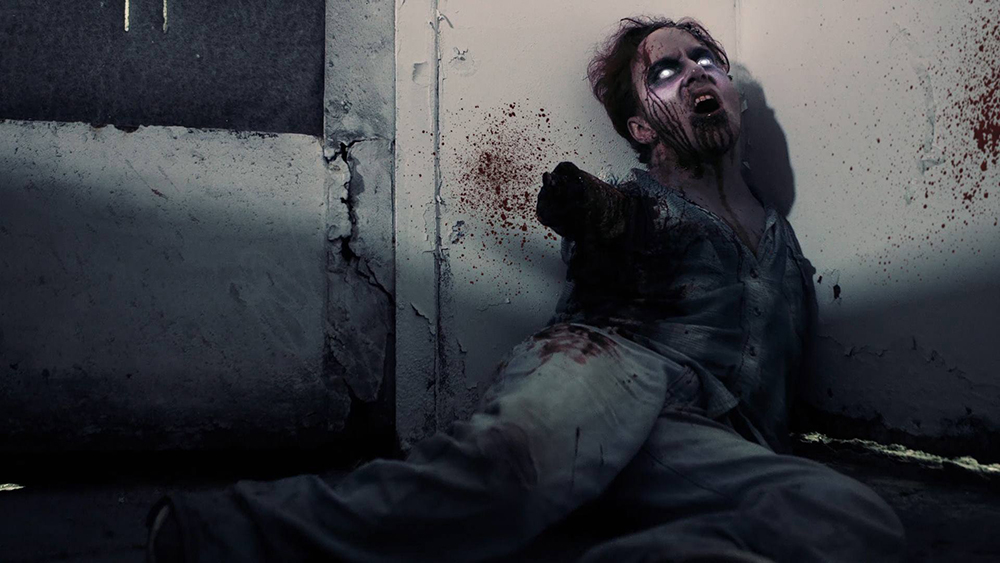 7. As someone who has starred in so many horror films, are there any out there that scare you, or has the magic of the fear been lost?

It’s rare, but every now and then I’ll see a film that really impacts me and sticks with me for a good, long while. I don’t really get much from gross-out gore or jump scares, but I do like slow burn suspense and I love having my mind fucked with. The Taking of Deborah Logan is an example of a film that completely took me by surprise and scared the living shit out of me. Another one that stands out would have to be The Initiation, which is more of a thriller at its core but builds up to a terrifying climax that really kept me on the edge of my seat.

8. Out of all your characters, what outfit has been your favorite and which if any have been most like you as a person?

I mean, if I said that Lady Athena wasn’t my favorite costume I would be a damn liar. Those heels did wonders for my thighs! Legs for days, man. As for the characters whose wardrobe most resembles my own, I’d probably have to say Kyle from Chill: The Killing Games or maybe Roy Shaw from Fighting the Sky. 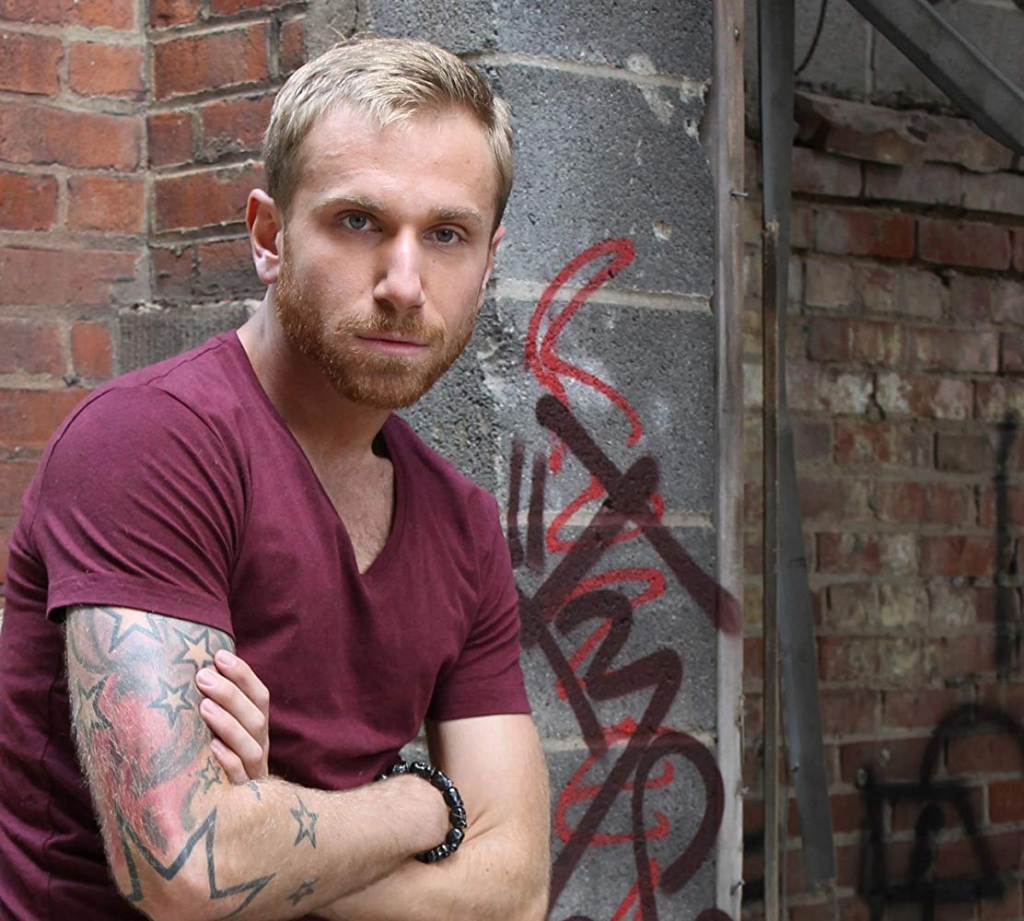 9. If you were putting together a movie, who would you pick as your ideal cast?

Oh wow, that’s a tough one! Like, out of anybody? Not just indie actors? For my own, personal, fan-boy reasons, I would need to include Judith O’Dea. Other than that, I would love to work alongside actresses like Barbara Crampton, Dee Wallace, Sharni Vinson, Tammy Blanchard, and Jocelin Donahue. And that’s just scraping the surface. The list goes on and on!

10. What would your ideal horror marathon include?

I would definitely need to throw some classic 80s creature features in there! The remakes of “The Thing” and “The Blob” both come to mind since I’m a huge fan of well-done practical effects. “Hello Mary Lou: Prom Night 2” is another stellar 80’s flick that comes to mind! After that I’d want to toss in some really effective suspense, so maybe “House of the Devil” or something along those lines. And then follow that up with something that boasts a lot of gore and a high body-count, so probably “You’re Next”! And then, to wrap it up, I would definitely go with “The Final Girls” because it genuinely makes me bawl every time I watch it. That, and I’m a sucker for any film that manages to incorporate Bette Davis Eyes. A classic!

Roger was kind enough to send me a link for the first official look at his upcoming film Rebirth.