Everywhere you turn these days, it seems like 80’s nostalgia has gone full-tilt — from the resurgence of once-popular childhood cartoons like The Smurfs, or movies like It and television shows like Stranger Things being set in the 80s. It’s enough to make an old man like me feel like a kid again.

Virginia-based artist Ed Harrington pokes fun at all kinds of pop-culture figures from days of yore, with a satirical wit that will have you reveling in the nostalgia and reeling from laughter. I had the pleasure of chatting with Harrington about his work, his influences, and his love of the genre. Check out my interview below with this unique and incredibly talented artist. 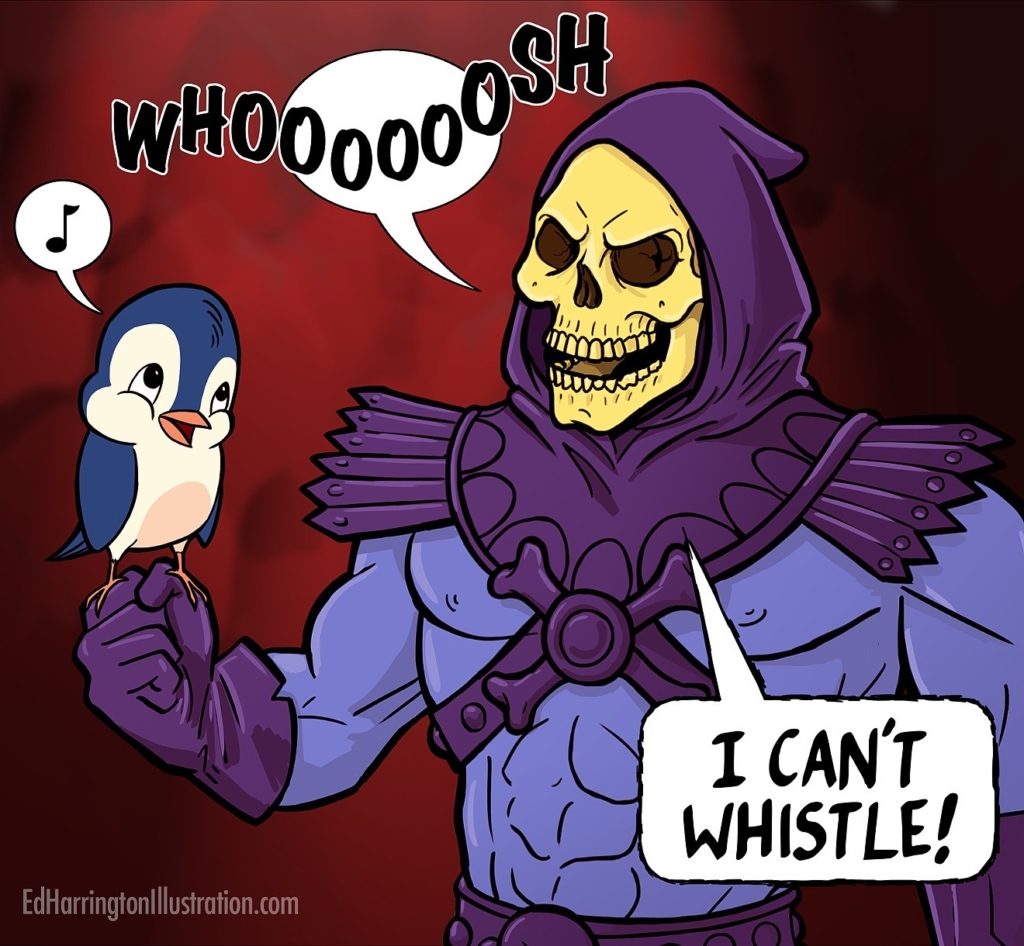 Black Cat: Who/what are some of your artistic influences?

Ed Harrington: I’m a fan of just about everything (being an art and design major in college), but am more drawn towards great linework. Love the drawing style of Frank Cho, Jim Lee, Frank Miller and Jae Lee, just to name a few.

BC: How did you come up with the name “Nothing Happened Today” for your Instagram page?

EH: That was actually the name of a webcomic that I drew about the non-adventures of two semi-cerebral drunkards. It was basically a comic with two people just talking while drinking and smoking.

BC: I’m a child of the 1980s, and a lot of your art references the kids shows of my childhood, from Thundercats to The Smurfs to Sesame Street. Discuss how you decided to utilize these beloved characters from our youth in your hilariously twisted art. 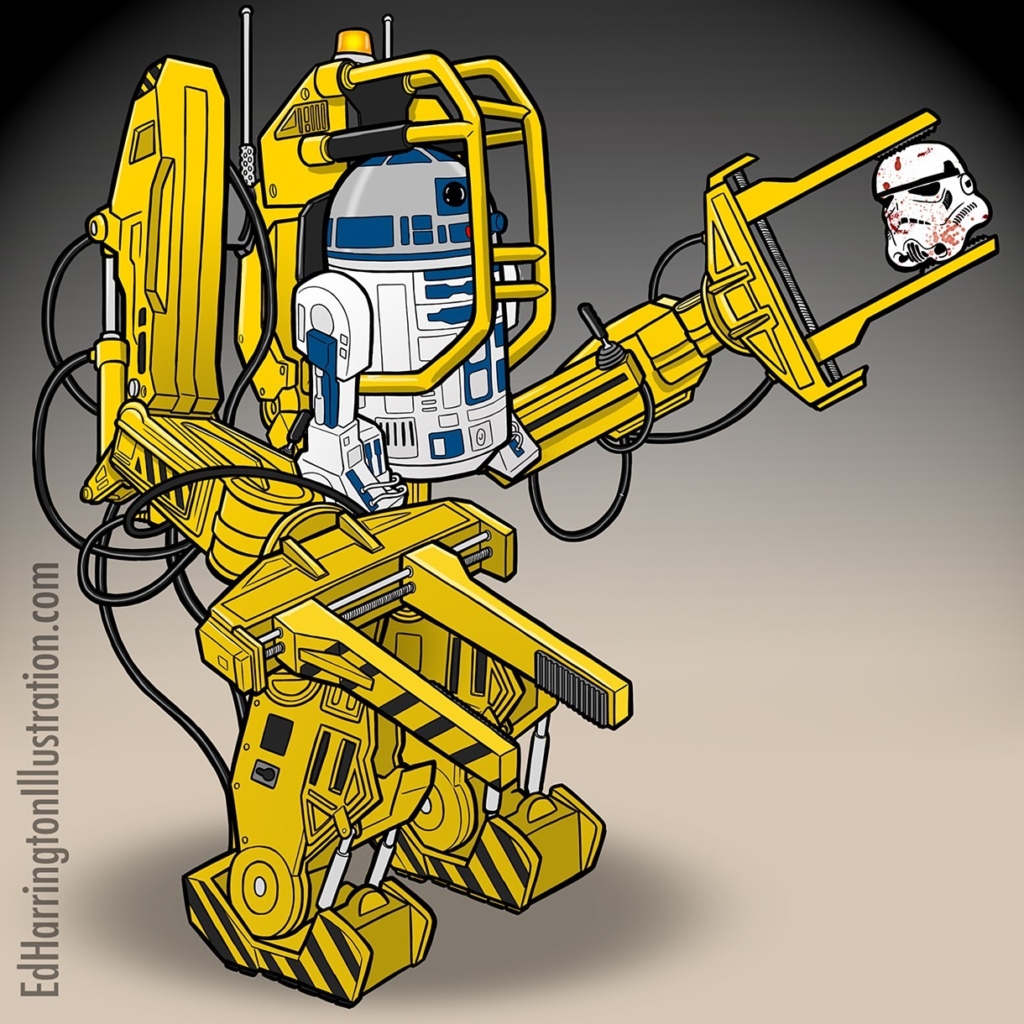 EH: It’s just that old adage “write what you know.” This is a hobby for me, so I might as well draw things that I love

BC: You obviously have a strong connection to the horror genre. When did you first get into horror, and what are some of your favorite horror films?

EH: I have always been a horror fan, ever since I was a little kid. The whole Alien franchise is one of my favorites, along with A Nightmare on Elm Street and the Friday the 13th series. More modern horror that I really enjoyed was the first Ring movie, The Babadook and both Let Me In and Let the Right One In.

BC: When it comes to horror, what aspects of the films do you enjoy the most and why (ex- gore, special effects, jump scares, storylines/tropes, certain characters, etc)?

EH: I actually enjoy the practical effects (along with the sense of dread that comes with a great movie). I think that CGI takes away some of the magic, since you don’t have to wonder how they got the shot or did the effect. 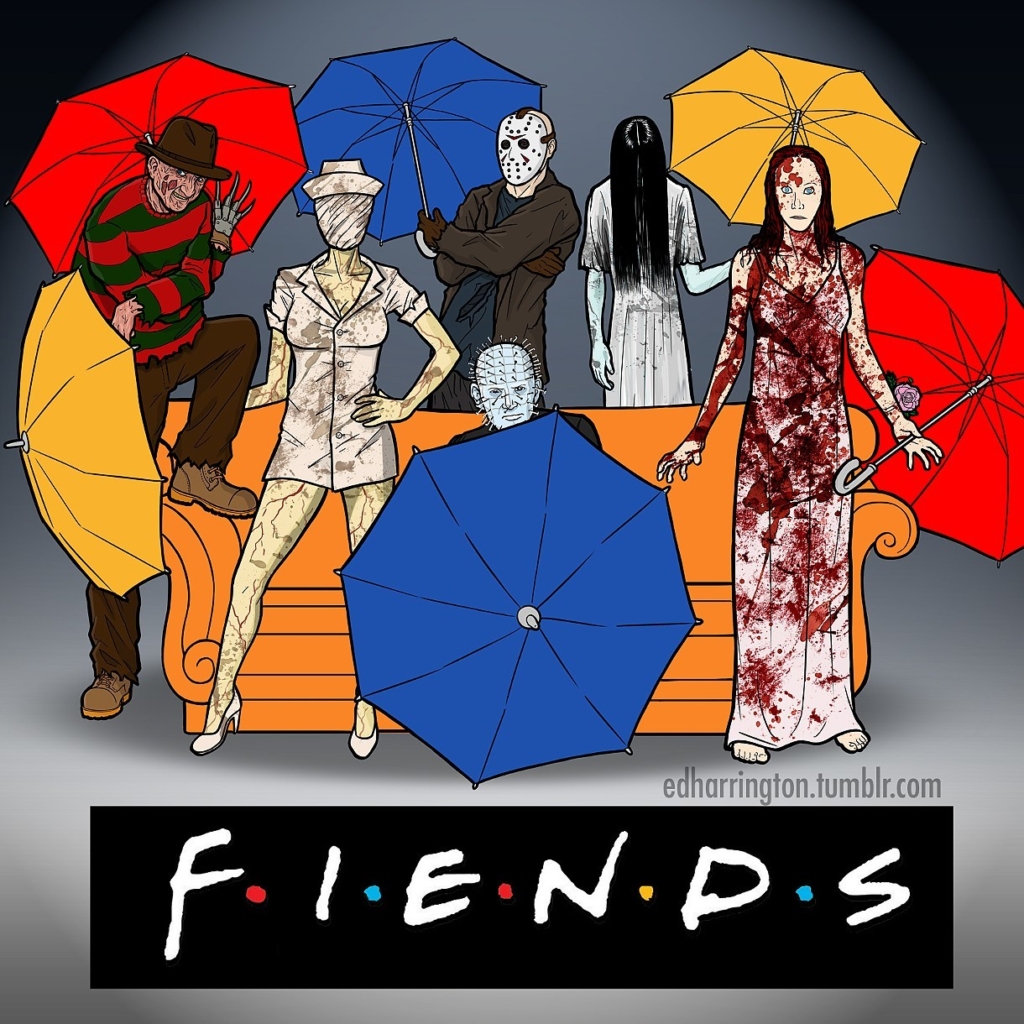 BC: When did you start working for the Richmond, VA-based alternative weekly publication Style Weekly, and in what capacity were you brought on staff?

EH: I started in 1999 at a business paper called Inside Business. After about 2 years, I was offered a job at Style Weekly — they are owned by the same company. My job was basically a graphic designer — laying out pages, editing and adjusting photos, creating infographics and illustrations.

BC: Discuss your comic “The HR Department” and why you decided on the one panel format as opposed to a multiple panel comic.

EH: Most of my life, I had always worked on multi-panel comics. They are a lot of work (especially since writing isn’t my strong suit)! Switching over to a 1-panel comic with very few or no words was a “no brainer”. 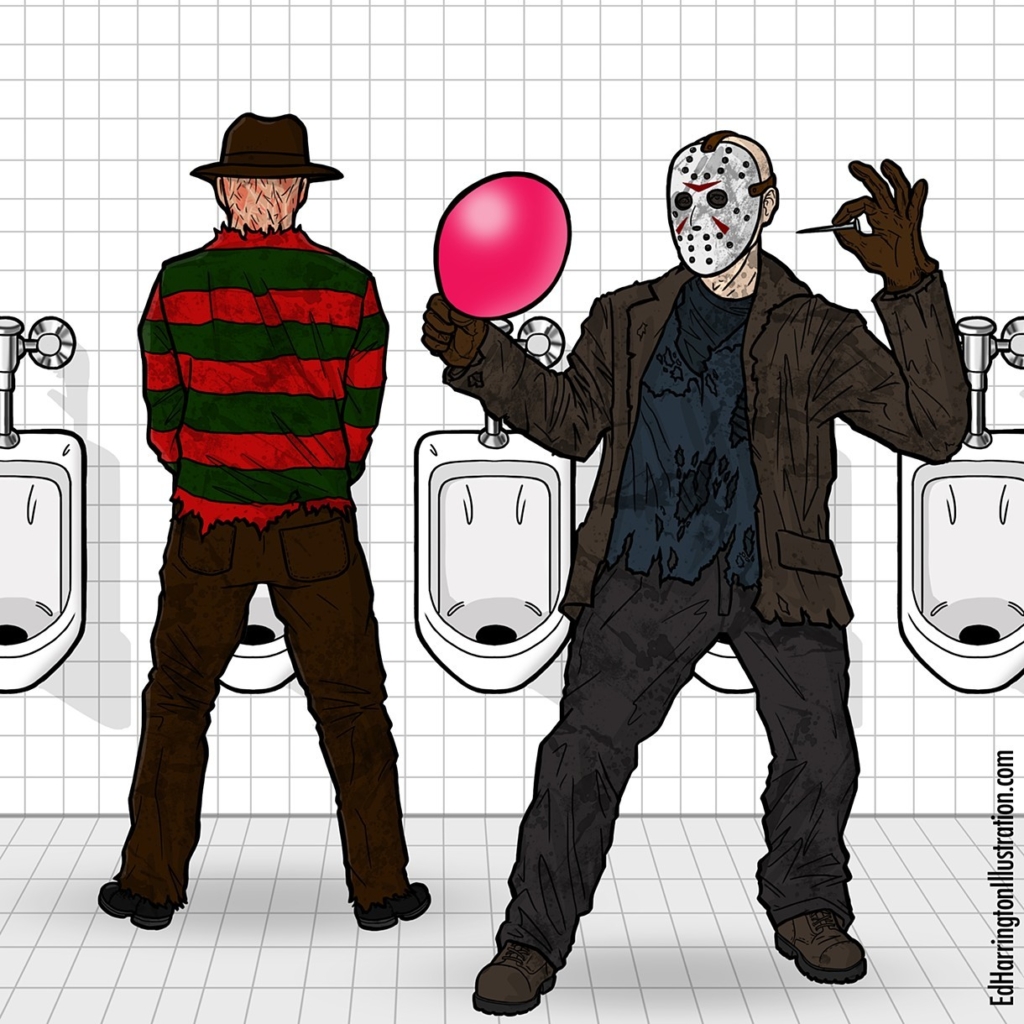 BC: When did you decide to start getting tattoos, and do you have any significant ones you wish to discuss?

EH: Richmond, Virginia is a tattoo heavy town. I started getting them pretty much right after I moved here for college. I actually worked as a tattoo artist for a few years too! Me and a few of my tattoo-shop co-workers have a few tiny matching tattoos that we put on each other whenever we got really bored at the shop. Those are some of my favorites.

BC: When did you get into archery, and what role does it play in your life?

EH: My dad got me into archery — he enjoyed it and thought that I might too (we have similar tastes in hobbies). It is honestly how I want to spend all of my free time. It’s almost like zen meditation — you have to concentrate on very small actions and movements, but it is also quite relaxing at the same time. Plus, I believe that everyone should have at least one deadly hobby! 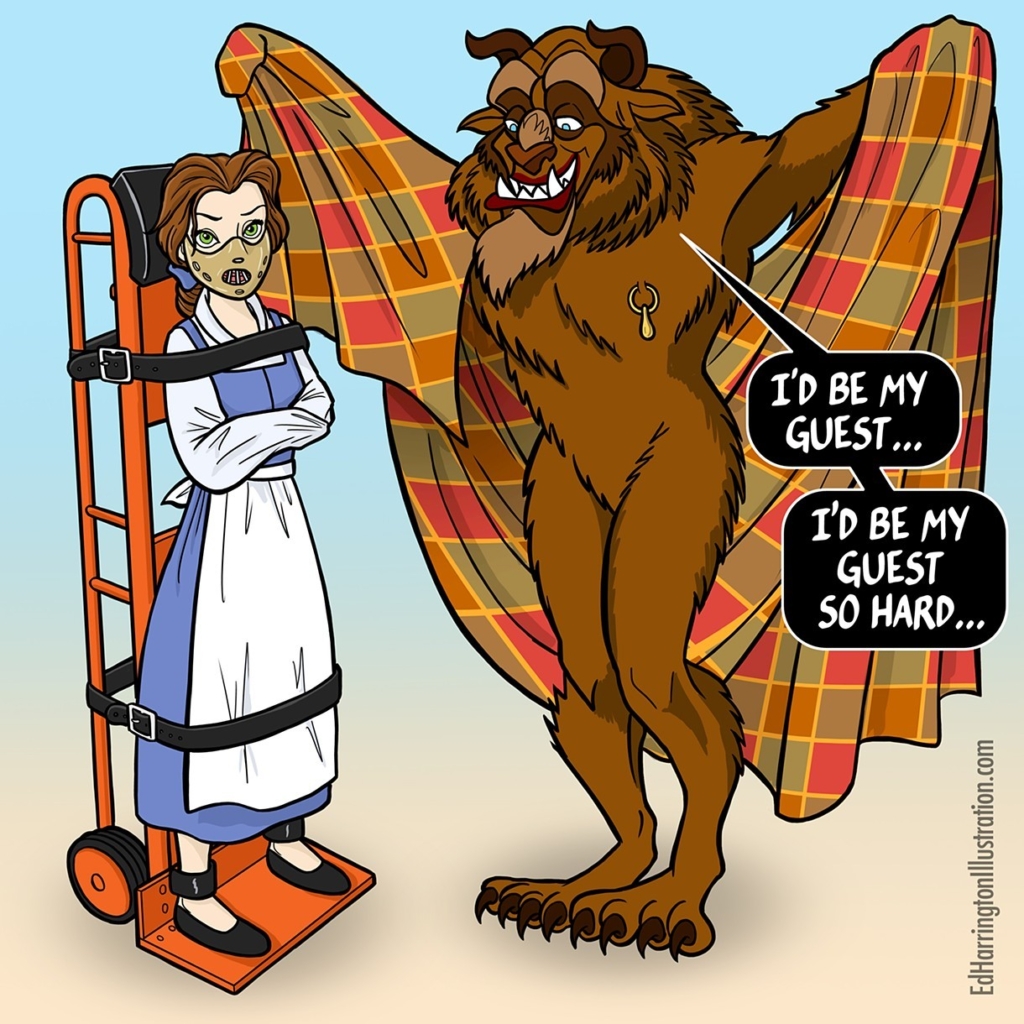 BC: Many horror fans have crossed paths with the band GWAR due to their penchant for extreme costumes and gore. What was the GWAR Memorial event, and how did you get involved in it?

EH: GWAR (who are based in Richmond) wanted to have a Viking funeral for one of its characters, Oderus Urungus. Dave Brockie, the band member who played Oderus, had died earlier that year. They needed an archer to shoot a flaming arrow into a boat carrying his costume, and somebody associated with the band who follows me on Instagram mentioned my name. From there, they just asked me if I wanted to do it.

It was honestly one of the most stressful moments of my life. First, I had to make flaming arrows that actually worked and stayed lit — the speed of the arrow quickly extinguished the fire. After lots of experimentation, I found that layers of cheesecloth and cut-down sparklers, sandwiched with rubber cement and dipped in kerosene would work. Then I had to get used to shooting such a heavy arrow. I spent every Sunday for about 2 months practicing.

When I got to the event, it was pretty obvious why I was there (I’m carrying a 6-foot longbow and a quiver full of arrows on my back), so just about everyone I ran into was telling me “don’t miss”. I did not want to piss-off about 5 thousand metalheads! Luckily, I was able to hit the boat on my first try, and the arrow stayed lit and ignited the funeral pyre. It really was one of the coolest things that I got to participate in. 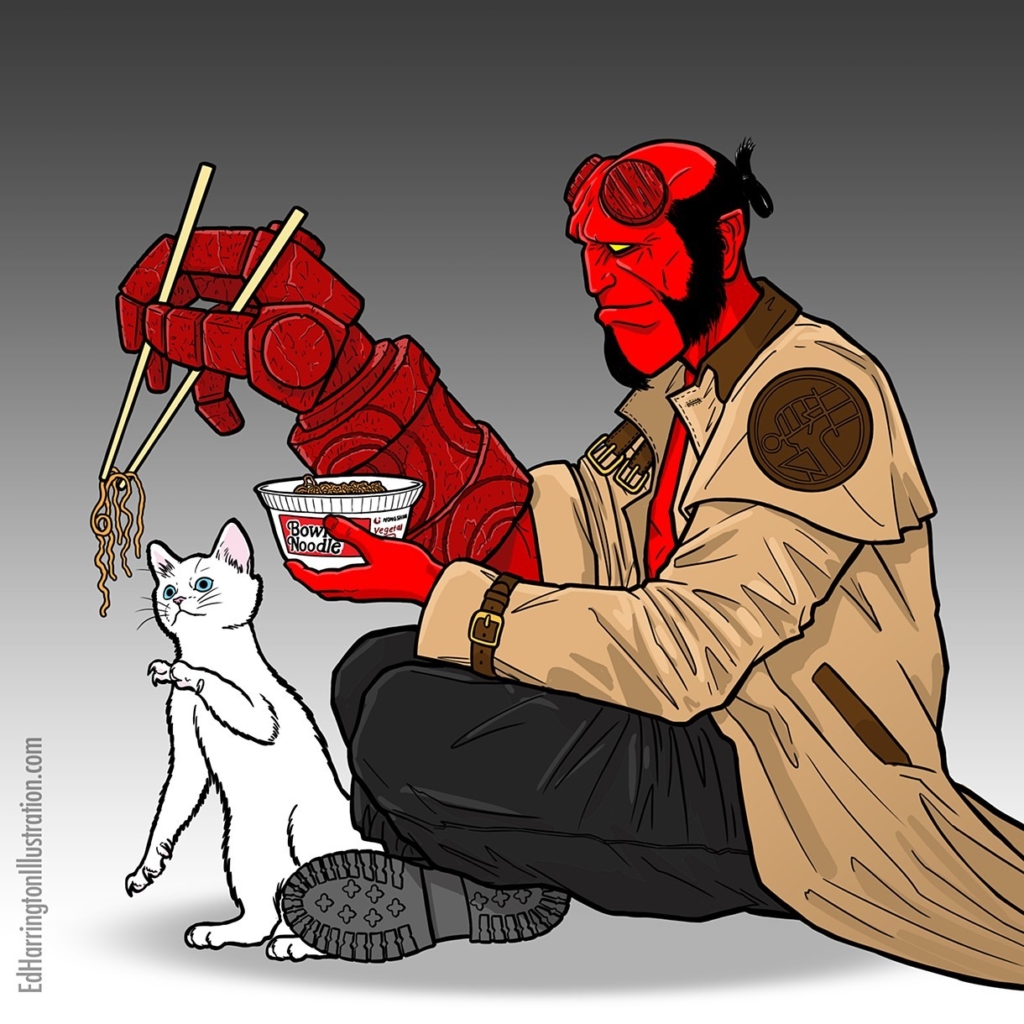 BC: You’ve been featured in nationally and internationally recognized publications and shows, from the Rachel Maddow show to Buzzfeed. What has this kind of exposure meant to you as an artist?

EH: It is actually nice, getting recognition like that. Drawing comics and illustrations has always been a passion of mine, and I am glad that all the late nights working on “my dumb hobby” leads to others enjoying my work and sense of humor. It is also fun to see your work on TV. I did some promo illustrations for Fox’s Backstrom and Guide to Life. It also frustrating when you see your work being put on shirts and prints without my permission. That goes with the extra exposure.

BC: What is your approach or philosophy in regard to creating art?

EH: One of my art professors had the best saying: “Your art isn’t precious.” When you realize this, it is quite liberating. You can just go and have fun and not stress over what you produce.

BC: What artistic mediums have you worked with over the years, and what are your favorite ones?

EH: Art school exposed me to working in just about every medium. My favorites to work in for fun are oil paints (but it’s been a while) and traditional pen and ink. 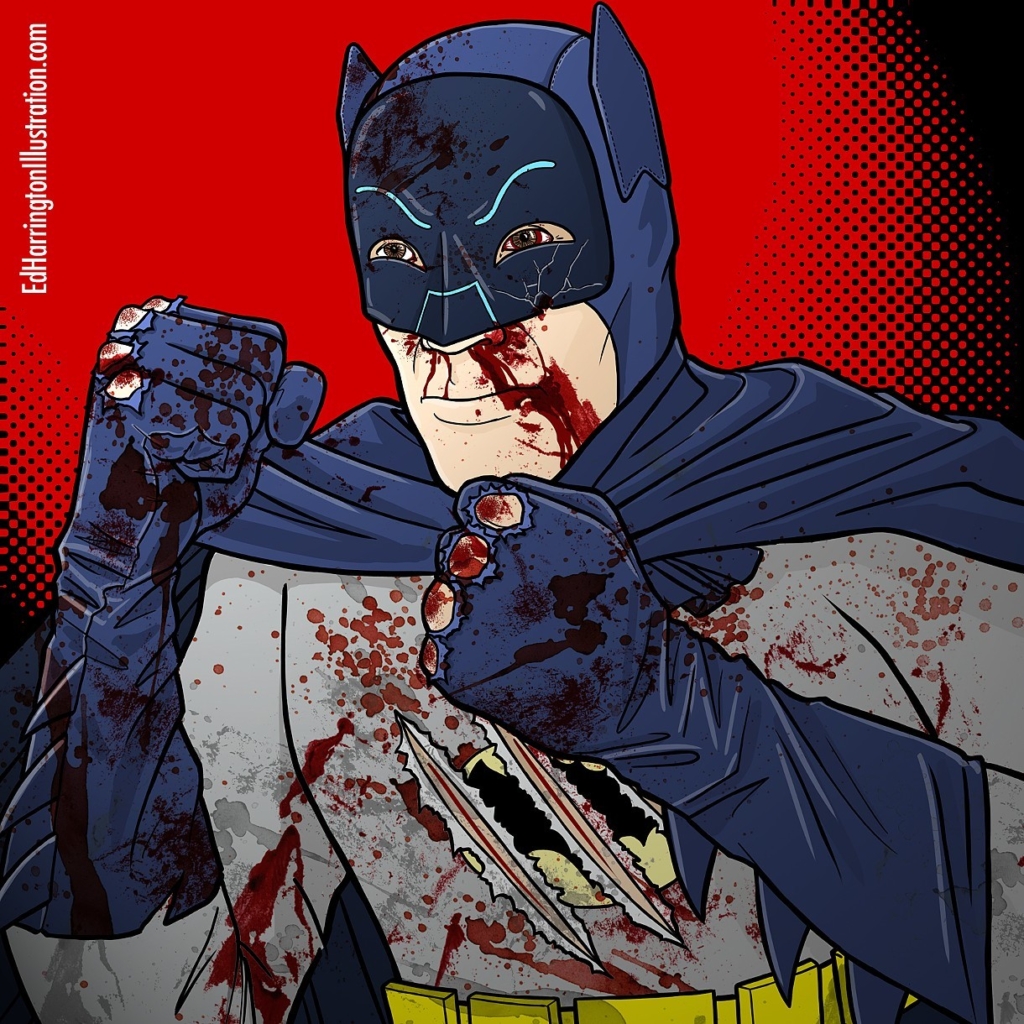 EH: What kind of digital tools do you utilize to create your art?

EH: Digitally I draw everything on a Macbook with Photoshop and a Wacom Intuos tablet (small). I created a couple simple custom brushes that mimicked my pen-on-paper drawing style.

BC: There are so many ways to sell your art online, from Etsy to Society 6 and many others. How did you decide upon Neato Shop? What about them fit what you wanted in an online shop?

EH: I liked that they are invitation only — so you don’t get too lost in the crowd. I also don’t want to have my stuff in too many places, so I just maintain the one Neatoshop, but I also sell individual designs to different companies here and there.

BC: What are some of your favorite pieces that you have created?

EH: I think my Ikea series as a whole — especially the Freddy Kruger piece. They combine everything that I do as an artist: my “day job” as a graphic designer, and my “night job” as a a illustrator/cartoonist. Plus, translating the Freddy Kruger nursery rhyme into Ikea pictographs might just be my crowning achievement. 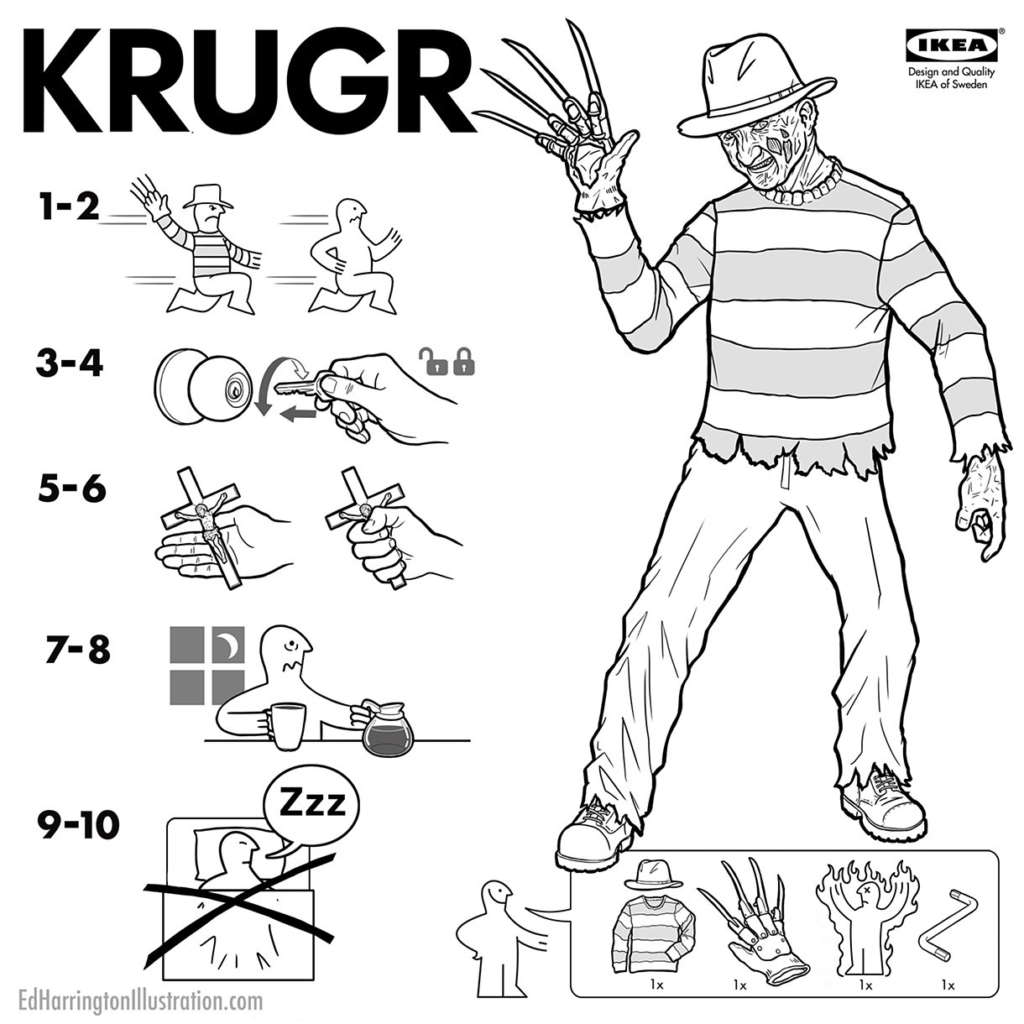 Many thanks to Ed Harrington for taking the time to chat with this cat. You can find Ed Harrington’s work on Instagram @nothinghappenedtoday, on his website edharringtonillustration.com, or at neatoshop.com/artist/Ed-Harrington.