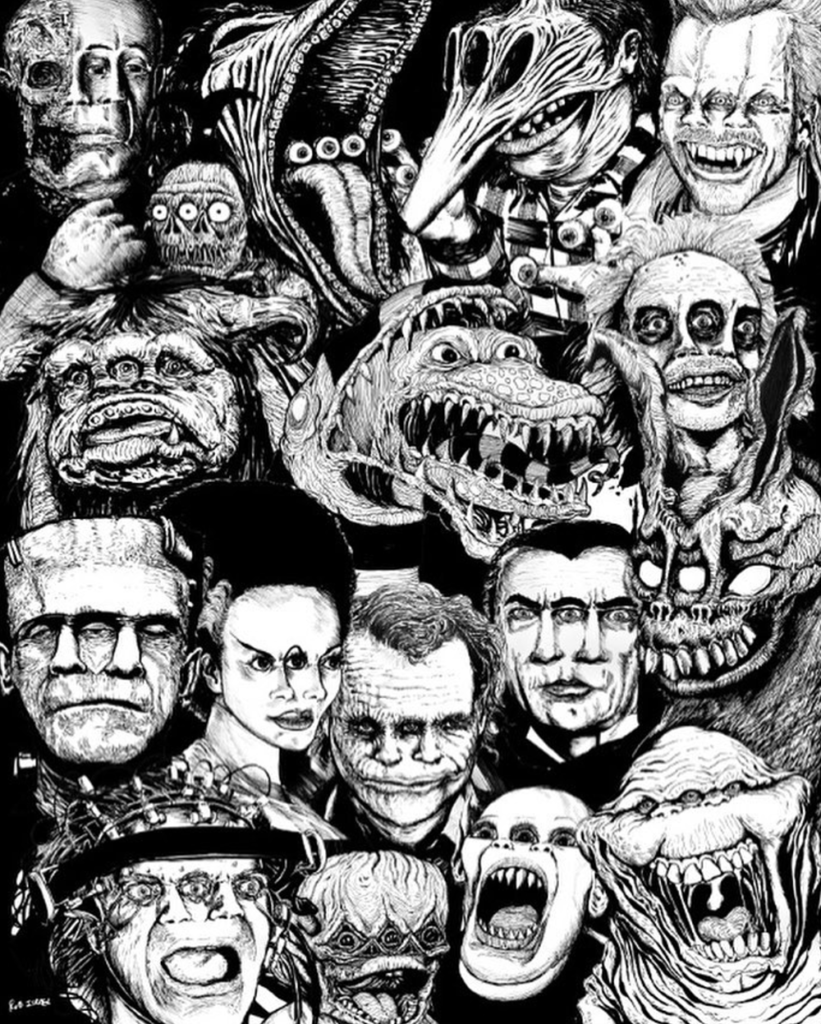 Instagram is filled with extremely talented artists who can draw photo-realistic portraits and scenery, which is impressive, but what separates one photo-realistic artist from another, or for that matter, from photographs themselves?

If you want to see something unique and somewhat unsettling, head on over to artist Rob Israel’s Instagram page, and you’ll be greeted with faces with three eyeballs, monsters with gaping toothed wounds all over their bodies, and wacky pop-culture mash-ups that will surprise and delight you.

I recently had the opportunity to chat with the Texas-based artist to find out where he draws (pun intended) his inspiration from.

Black Cat: Tell me a bit about your artistic journey.

Rob Israel: I was a big fan of the comic book artists of the 80s and 90s like Todd McFarlane, Jim Lee, George Perez, Dale Keown, Moebius, Arthur Adams and Byrne and got a lot of ideas as a kid from them. Later in life I worked in advertising and got a lot of my stuff trashed along the way, but that was a great learning experience—it motivated me to keep on drawing and try to get better. 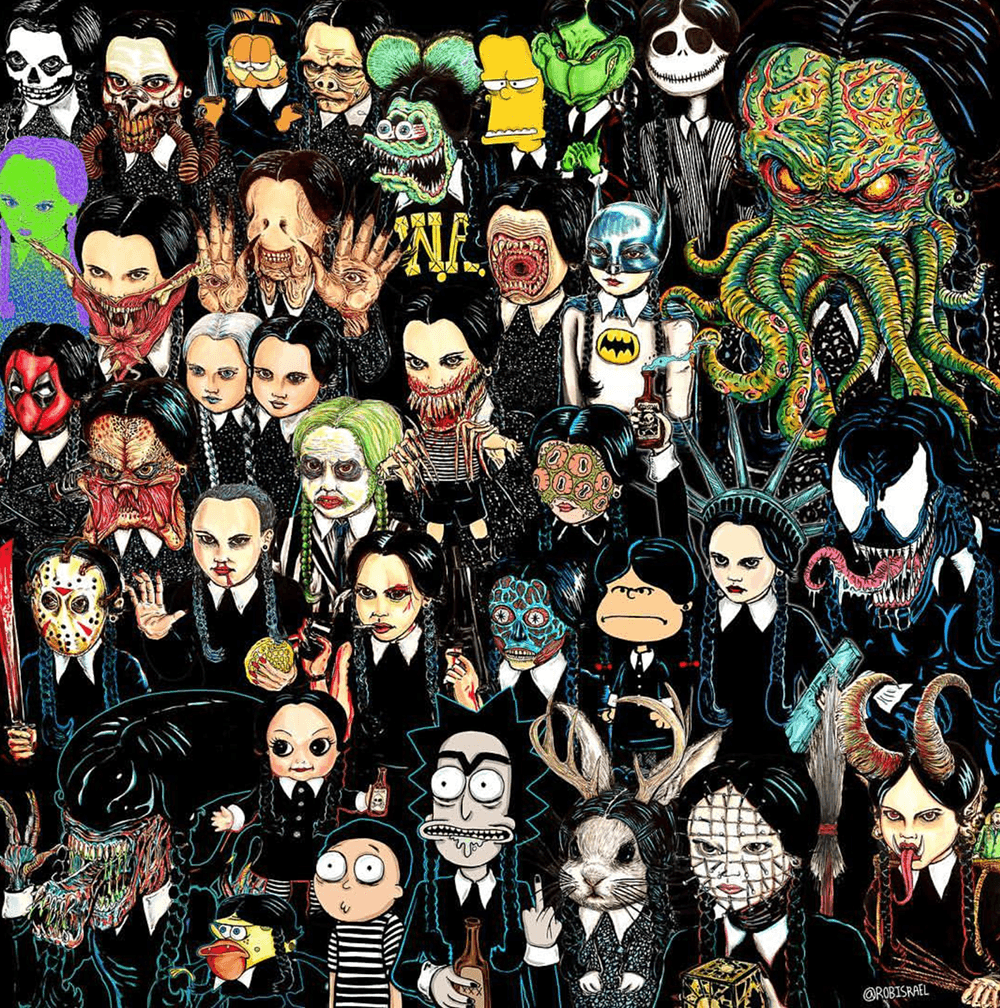 BC: When and why did you decide you were ready to share your artwork with the world?

RI: Well, I’ve always been creating art, but there really was nowhere to share it. That’s what I love about the internet—it’s the great leveler. It really opens up so many opportunities for artists to share their work and to get instant feedback. Instagram was a great way to put my stuff out there and the reception I got over the years has definitely exceeded any expectations I could ever have. 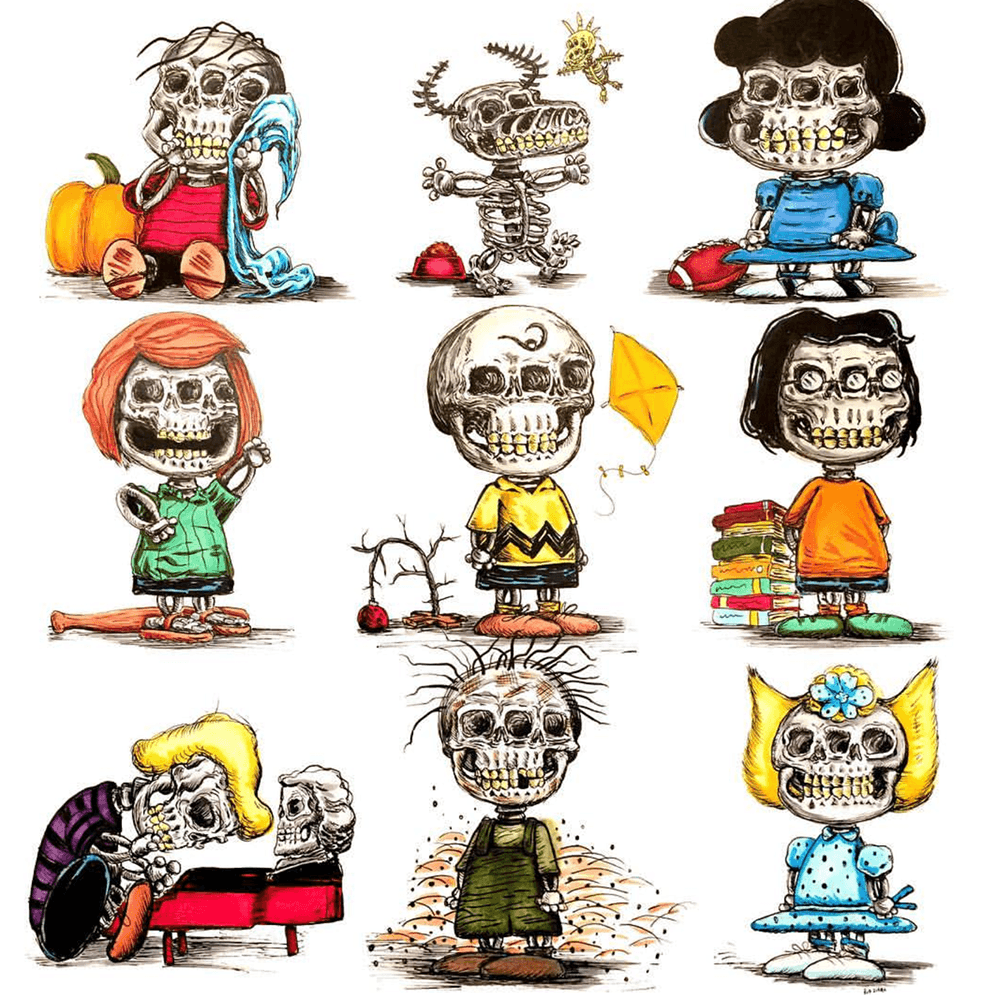 BC: You have a very distinctive style—who were some of your influences?

RI: I was drawn to artists who utilized a lot of distorted imagery in their work, for instance Robert Crumb’s comics or Ed Roth’s character “Ratfink”. I also liked the skater art of Jim Phillips and his son Jimbo. Other influences include Alex Pardee, Ron English, Coop, Art Spiegelman, Puss Head, Dave Correia, Salvador Dali, and Skinner.

BC: You have a lot of cool pop-culture references in your work—what are some of your favorite subjects?

RI: Yeah, I like stuff like Rick and Morty, The Simpsons, Stranger Things, etc. Every Wednesday I like to do a play on Wednesday Addams from The Addams Family, combining her with other recognizable figures, like the alien from Alien or the vampire from Blade 2. 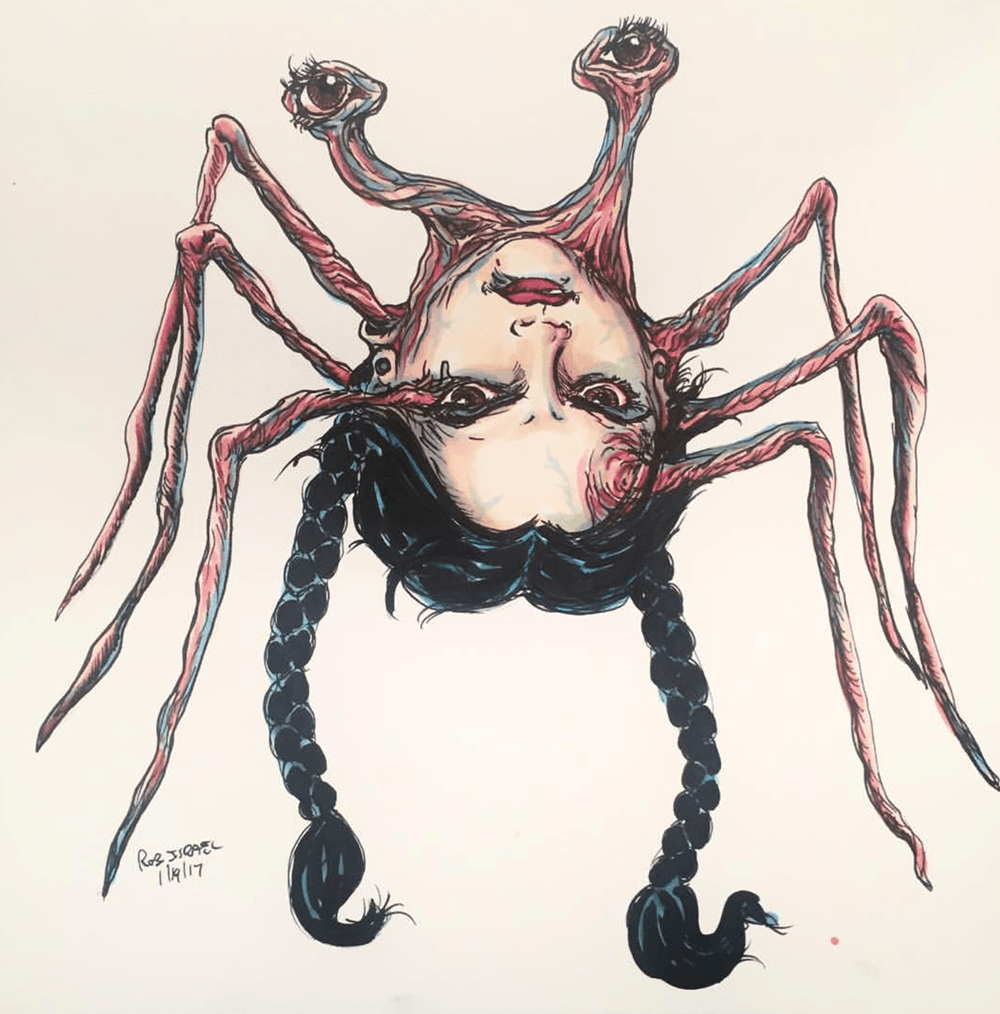 BC: Any favorite horror films?

RI: The Nightmare on Elm Street series, Friday the 13th, Society, Killer Klowns From Outer Space, Society, They Live, the Predator and Alien movies (but not the Alien vs. Predator films), The Fly, the Evil Dead series, Night of the Living Dead, the Dawn of the Dead remake, Return of the Living Dead, and the Troma films. I used to work at Troma many years ago.

BC: Wow—tell me about your time at Troma.

RI: I went to college for graphic design and at the time there were wanted ads in Time Magazine and the Village Voice, so I applied for the Troma job. At that time in the early 2000s, no one knew how to do internet stuff. But everyone wanted it, so I made a flash web cartoon series for them…and I hardly even knew how to use flash! I was really more interested in getting involved with their films and stuff like that. I met cool people there, like Lloyd Kaufman and once I was even cursed out by John Lithgow. 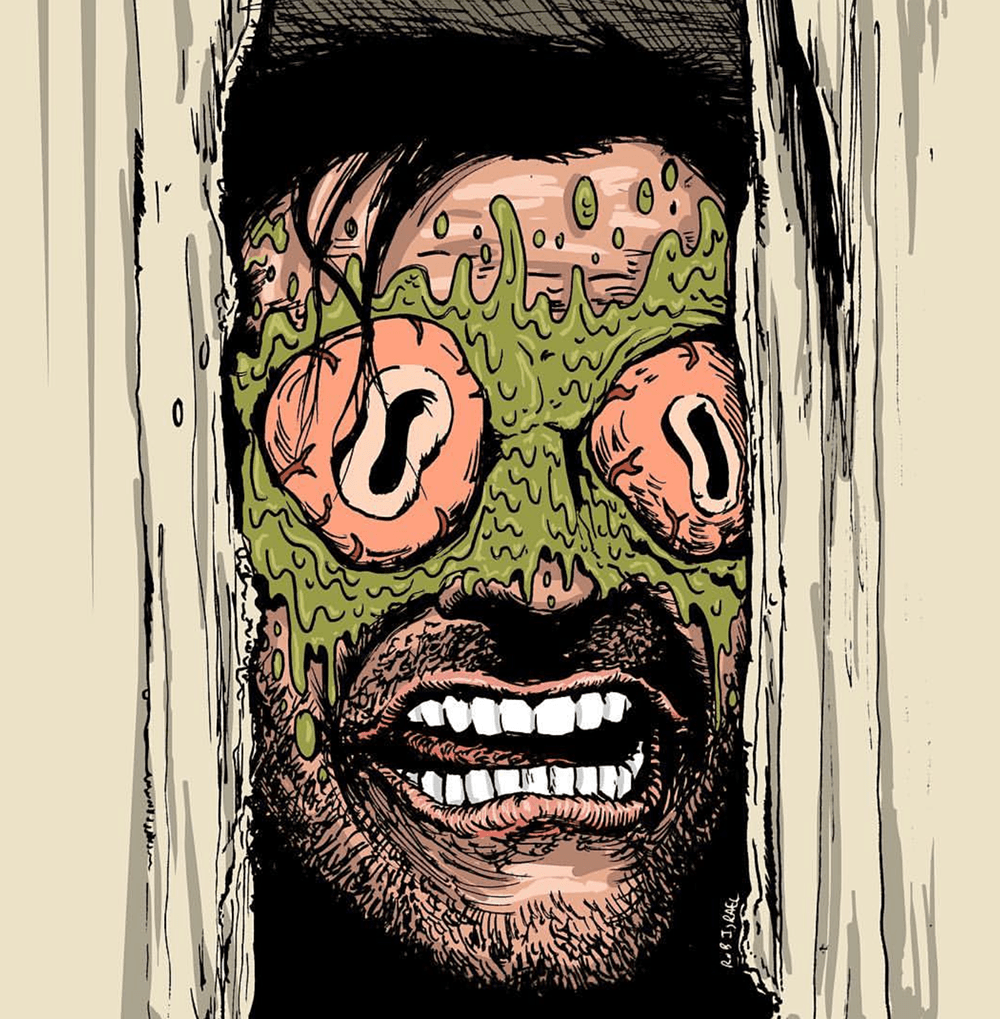 BC: How did that interaction with John Lithgow happen?

RI: We were filming for a series called “Troma’s Edge TV” and the crew for the show 3rd Rock From the Sun just happened to be filming at a restaurant right next door to the Troma building. So, we got our crew together, and I dressed up as Sargent Kabukiman and we went around fucking with people and interviewing them, pretending we were filming Troma’s big budget film Bulimic Bitches In Love.

I was interviewing people but called them by names other than their own. Actor French Stewart was cool—he let me call him “Bob Saget” the whole time. John Lithgow was tougher to approach. When I got my chance, I went up to him and said, “John Malkovich! John Malkovich! What is it like to be in Troma’s big budget film Bulemic Bitches In Love?” He turned around and said in his most John Lithgow way, “Take that makeup off, you asshole.” 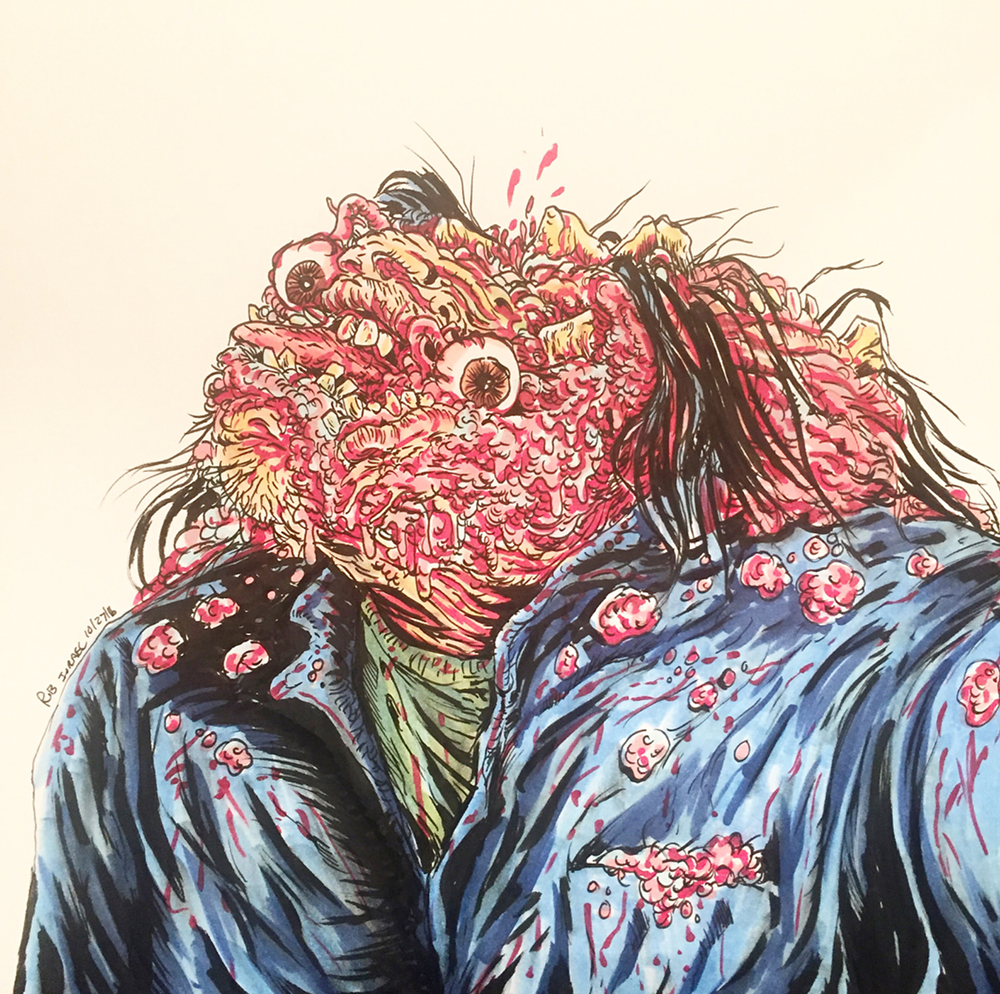 BC: Some artists like to stay apolitical with their art, but you dive right in with your anti-Trump pieces. How do you feel about getting political as an artist?

RI: What I say is how can you not make political statements in your art in this day and age? I mean, I always expressed my political beliefs through my art over the years; like during the Bush years I drew stuff about him stealing the 2000 election, the Iraq War lie, the Katrina mess and any other f’d up thing he did. But there was nowhere to share my frustrations, and I felt like I was just screaming at the wall back then.

I am unabashedly liberal, and I cannot stand what I see in our current political climate. I know I’m probably not the first to do this, but I like depicting Trump in all kinds of gross ways—because he is a gross person—so I will make his face look like an ass with shit coming out of it or a human version of Jabba the Hutt.