We interview up-and-coming artist from Australia, Morgan Kearley, a multi-talented creator who is definitely someone to watch. 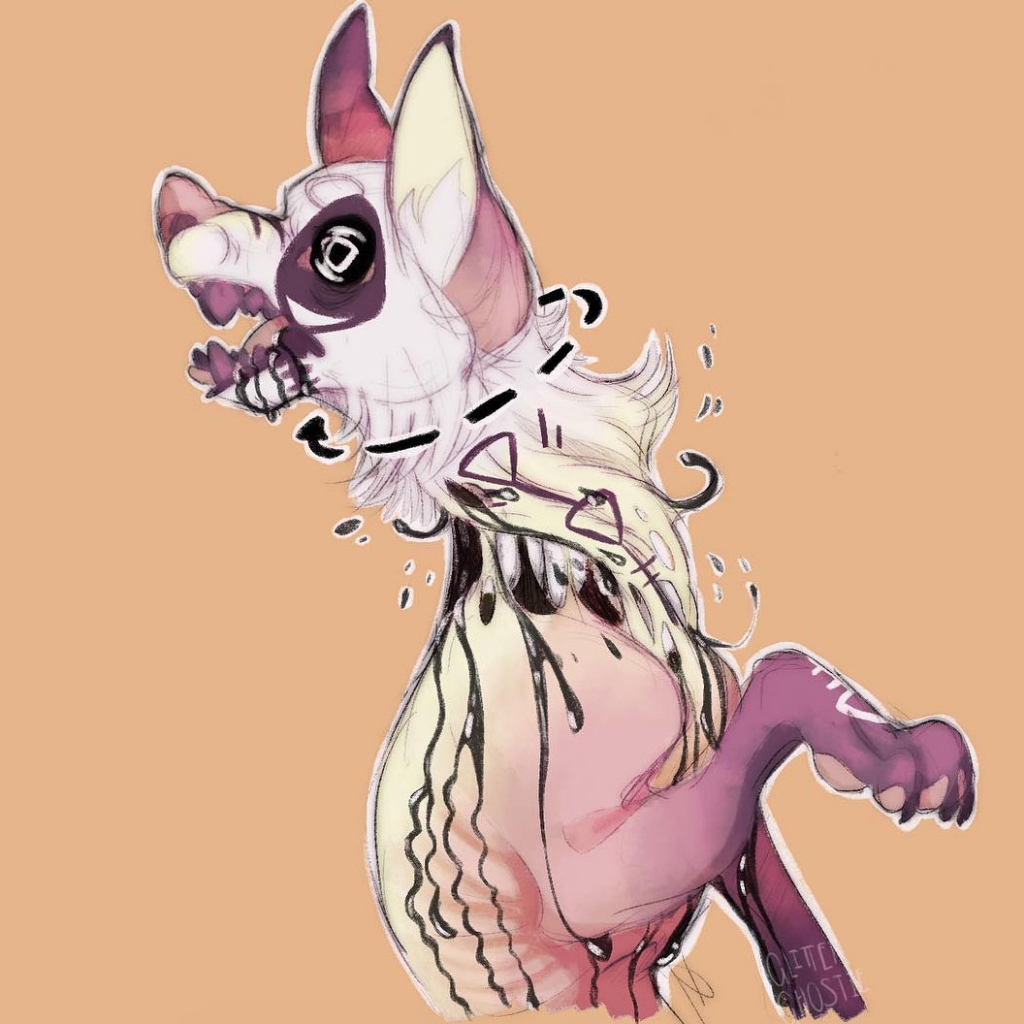 Morgan Kearley (Writer, Marcus) is an extremely talented performer, artist, and filmmaker from Australia, embarking on a commission-based project for the month simply called Goretober. Much like its sister concept, Inktober, Goretober is focused around a single piece of artwork each day, put forth by a prompt.

However, while Inktober prompts usually edge on a softer, more ‘family-friendly’ angle, Goretober dives headlong into a world of viscera with joyous abandon. Some of the prompts Kearley has worked on so far have involved pastel gore and the stitching of wings where wings should not be.

Kearley, who also goes by Tommy, has a very unique style. His work is mostly digital-based, with a lot of gentle curves and bright colors. But beyond that softness, in some of his works, there’s a darkness. Frequently, he works with glitch art, multi-eyed beings, and cryptids of all sorts, and wields these concepts with an enviable skill.

It’s for these reasons, and more, that I wanted to sit down with Morgan and ask him a few questions. 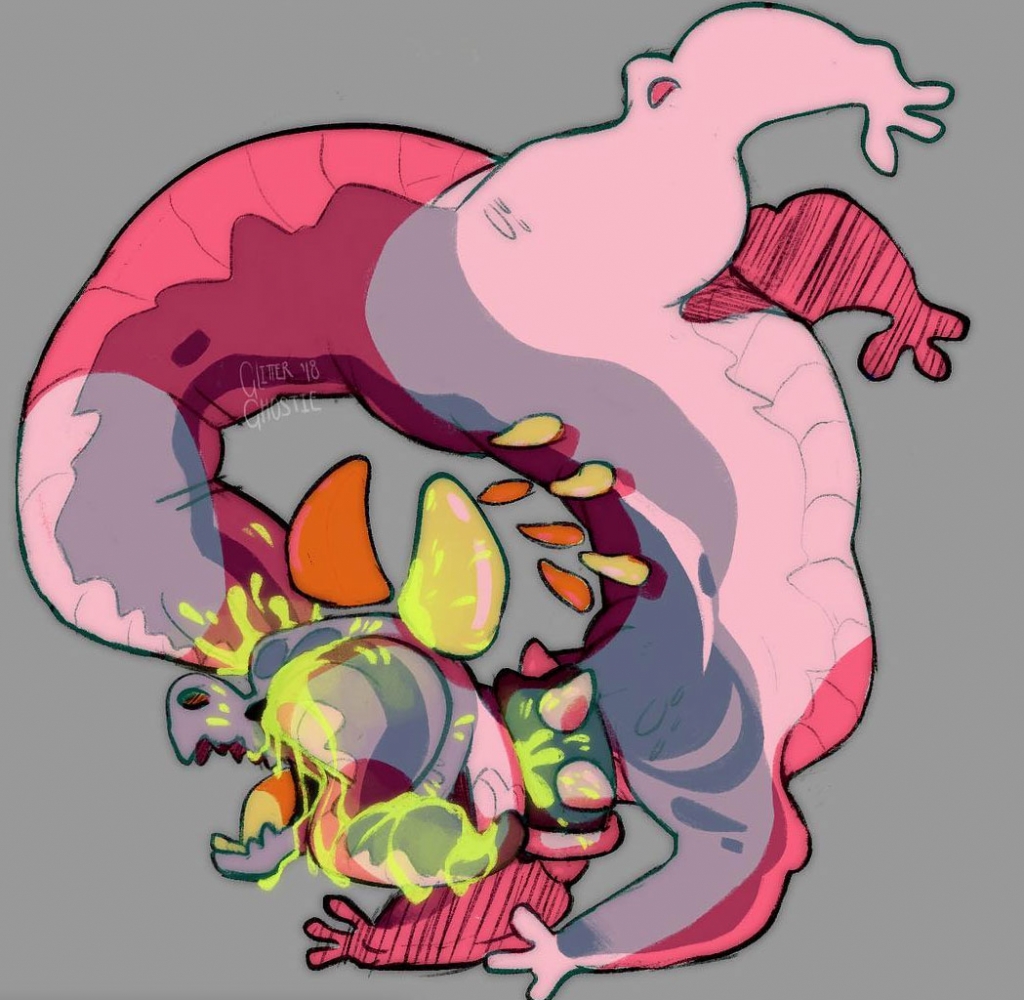 My favorite scary movie…gosh, that’s so hard to choose. I’m admittedly a bit picky when it comes to horror, actually. But I think my all-time favorite would have to be the 1973 indie film ‘Don’t Look Now’ starring Donald Sutherland. My high school drama teacher recommended it to me while studying for my exam because of the color theory, symbolism and cinematographic style. It’s a difficult find, but totally worth the search.

2. When did you start making art?

I’ve been making art since before I can remember. I loved drawing turtles in kindergarten. I loved drawing wolves in middle school. When I was 11, I got my first drawing tablet and never looked back. Nowadays I love drawing whatever inspires me. 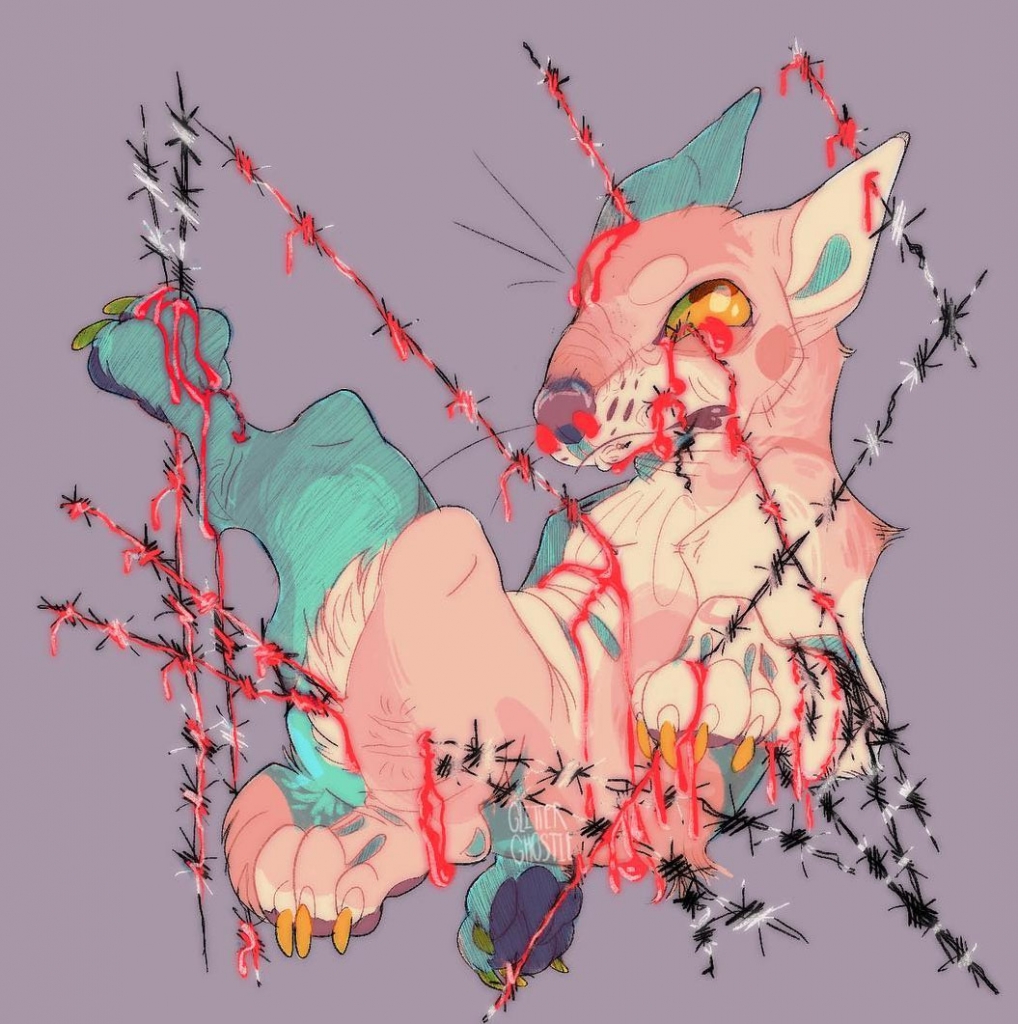 3. Who are your biggest inspirations?

I have a lot of inspirations — even other mediums inspire my art. Like Glass Animals. No other music has gotten me into the mood to draw something quite like theirs. Other visual artists I look up to include Amrit Brar (illustrator of the Shitty Horoscopes zine), Tim Burton, and Del Kathryn Barton.

My favorite piece would have to be the following: 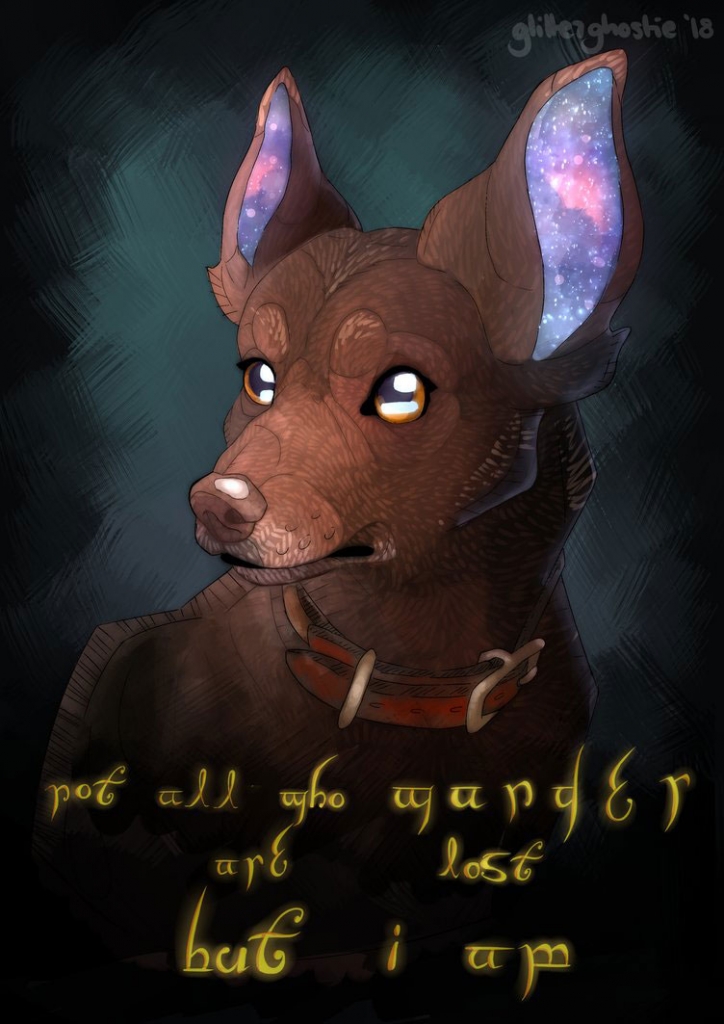 It was done for Australian comedian Geraldine Hickey, commissioned by her partner, who was the producer of a film I was working on at the time. Even though I did it much earlier this year, it’s still one of my favorite things that I’ve done. It pushed me out of my comfort zone and allowed me to try new techniques, and while it was all uncharted territory for me I was (and still am) immensely happy with the result. 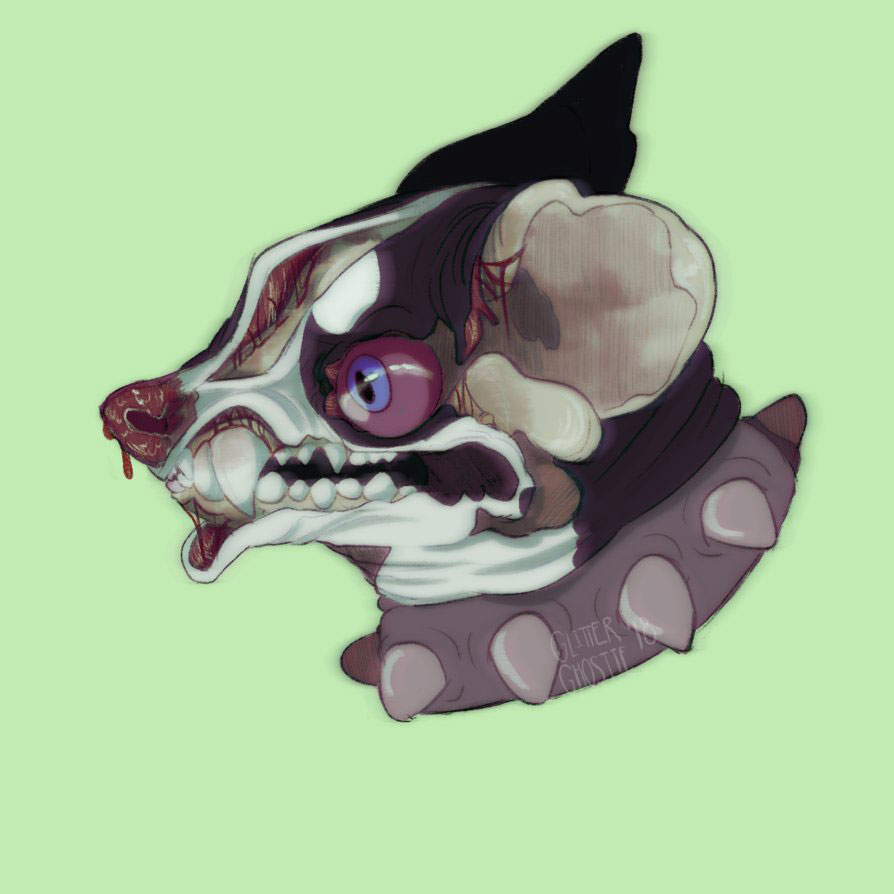 The above piece was for day 6 of Goretober this year. It’s the piece I’m most proud of so far because I was able to reference dog skulls from life while still trying to translate it into my own style. It isn’t perfect, but I had fun doing it. It gave me the chance to experiment, and if I’m being honest, drawing gore is extremely cathartic.

5. What advice would you give to other artists?

Practice practice practice. It’s probably the most disheartening thing to hear because everyone wants some sort of ‘get rich quick’ method when it comes to drawing. But that’s all there is to it, really.  Draw things that make you happy, but don’t be afraid to push yourself out of your comfort zone. Keep everything you draw, even if it’s bad. Draw from memory, draw from reference. Then compare the two. It’s a terrific exercise. Study realism, even if you wanna draw cartoony stuff. Even the most simplistic styles take notes from realism. 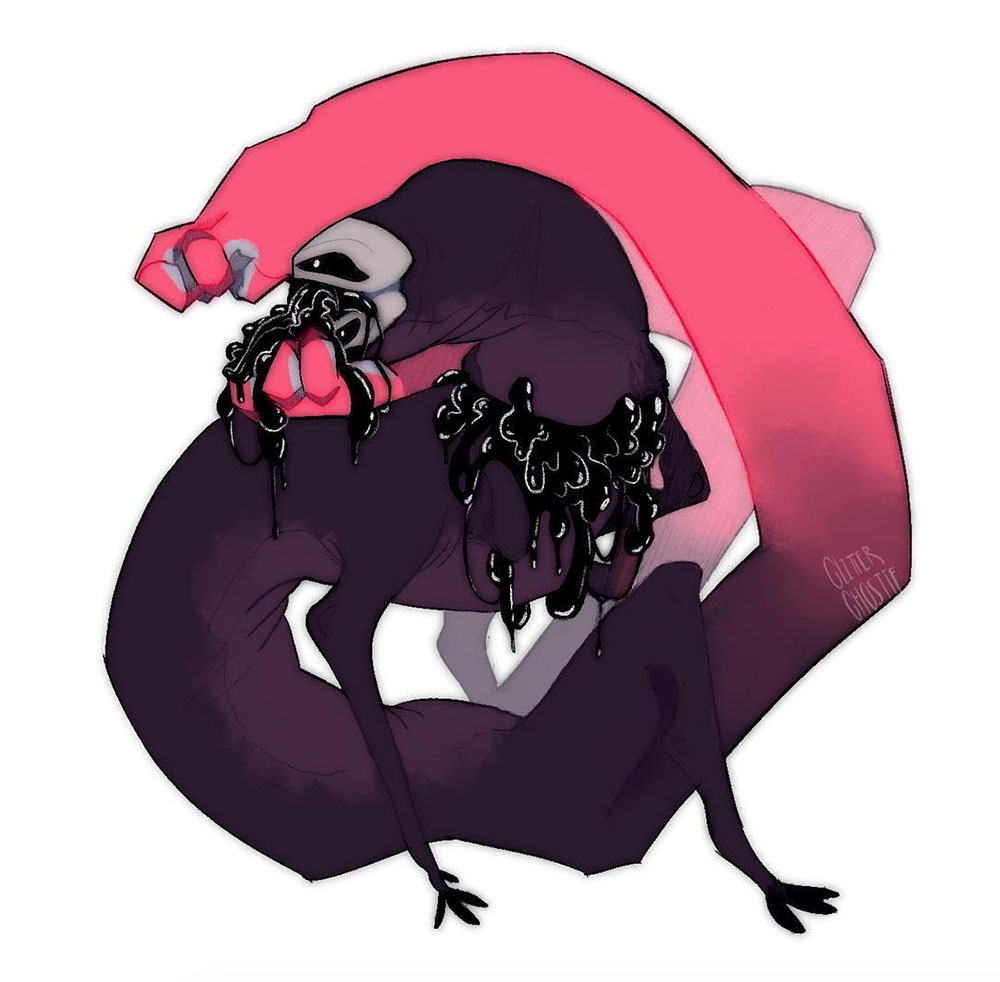 6. Do you have any other horror-related projects going on besides the Goretober stuff?

I was cast as the main character in a story-based podcast called Cryptozooradio — a radio play about five young teens in the 1980s, their less-than-legitimate radio show about big conspiracies, and the horrors hidden in the vast woodland around their hometown. It’s an LGBT-inclusive story, with LGBT characters written and played by LGBT people.

7. Where can people find your art?

I can be found on the following websites: glitterghostie on deviantart, glitter.ghostie on Instagram, and glitterghostle on tumblr.