If you like horror that digs deep and has something to say beyond just providing thrills and chills, here are some must-read indie novels.

Horror can be like magic in many ways. Despite its often graphic content and intense scares, the genre has an uncanny ability to bring awareness to aspects of life that people may not want to confront. It is like an open door into the unkindness that lurks within humanity’s psyche, and some people do not feel a desire to explore those ideas that haunt us all. However, it can be used as an outlet, a metaphor, a giant neon sign telling us things that we must acknowledge. Horror can and often does have a message, and sometimes we as readers must open ourselves to these.

With this month’s selection of books, we present a few incredible titles that do exactly this. 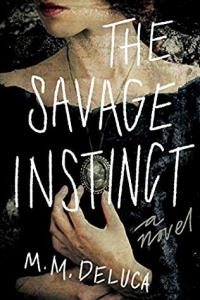 Fresh from the asylum for the insane, Clara Blackstone must navigate what is expected of her by the society around her, by her husband, and a newfound obsession with the infamous Mary Ann Cotton — England’s first female serial killer.

DeLuca has created a fascinating novel that does several things correctly. We are put in the shoes of Clara Blackstone, a woman who was unfortunately imprisoned in an asylum at the height of “female hysteria” and was facing cruelties sanctioned by men, the main one being her husband.

In prose that sets us directly within the late 1800s time period, we not only sympathize with Clara but follow the truths that are unveiled about her treatment and the treatment of others. Giving the historic Mary Ann Cotton a role to play as a mentor to our protagonist creates a depth of reality, and tension as the bond begins to grow between the two.

The Savage Instinct is a novel of such brilliance, hitting the hammer on the nail time and time again with such ease and poise, that the reader will feel a similar anger building within them.

It is a masterstroke of historic fiction, while not shying away from laying parallels to the current state of the world.

BUY IT IN PAPERBACK, KINDLE, AUDIOBOOK, OR AUDIO CD FORMATS 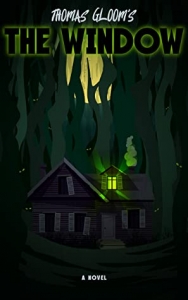 Mark is a recovered drug addict, but after losing his parents in a freak accident, his life is set on a trajectory that he never would have guessed. Will he fall back into his old ways?

The Window is an interesting tale of an unreliable narrator, in which we are shown right off the bat how skewed his perception is. Written in a way that reveals a lack of self-awareness and empathy from Mark, we follow him down as he spirals into the wrongs of his past and how it has affected his relationships in the present.

An interesting trick that Gloom utilizes in crafting the story is creating a known detachment from the rest of the cast of characters. This might put off some readers because of the blatant inability to see his wrongs as just that, but it does well to create a realistic tone of a man who has had an addiction and must live with the effects long after coming clean.

The prose and the story are emotional in nature, despite Mark as a character keeping us at arm’s length, and it is one that serves to create a lasting tension with every twist and turn.

All this is done for a slow burn of a story that hits its final third and gives the readers their reward for the patience. 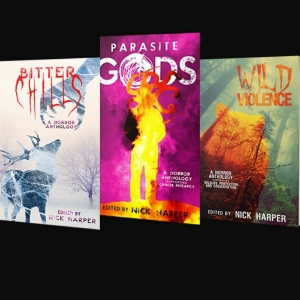 Bitter Chills, Parasite Gods, and the latest release Wild Violence are a trilogy of themed anthologies released by Blood Rites Publishing. Comprised of a variety of authors — some making their debut alongside other more seasoned authors — the books give a delightful taste of the indie community far and wide.

With the three books being themed-based, the stories do well to cover great ground, making use of their themes in imaginative ways. As with many anthologies, the styles of each individual author are varied and unique but don’t seem to clash with one another in what could be jarring ways. When one story ends, the other picks up and manages to continue the dread and horror fun while working great as its own stand alone story.

It is to be noted that the proceeds for Parasite Gods and Wild Violence will be donated to Cancer Research UK and Wildlife Protection & Conservation, respectively.

GET THE KINDLE OR PAPERBACK EDITIONS

Like a magician reaching into a hat and pulling out a dead rabbit, horror can — and often does — bring surprises with it. There are morals and lessons in almost every story we read, entertaining as they may be. Most, but not all, drive us to look at humanity and see the good as well as the bad within us. And if those are the types of stories that draw you in, then these are the books for you.