Five On It: Tourist Traps

One theme, five killer films. This week, it’s destination horror as we explore the highs and lows of travel and hope to cover some uncharted ground.

Now that we’re in the throws of summer in the northern hemisphere, vacation plans are on everyone’s mind (or at least they would be under normal circumstances). As I think about all the jet setting I would usually be doing this time of year, I reminisce about all the horror stories that have influenced my traveling style. I tend to be a neurotic over-planner, thanks largely to movies like the ones I’ve listed here. I always do my best to structure my itinerary to avoid stumbling into any kidnapping, curse provoking, or human sacrifice situations. Basically, if at any point it feels like I might be walking into a scene out of a horror movie, I consult my guidebook and quickly reroute.

Since most of us are stuck at home for the foreseeable future, the following five films can help you escape without leaving the house — and may make you feel much better about your lack of travel plans. 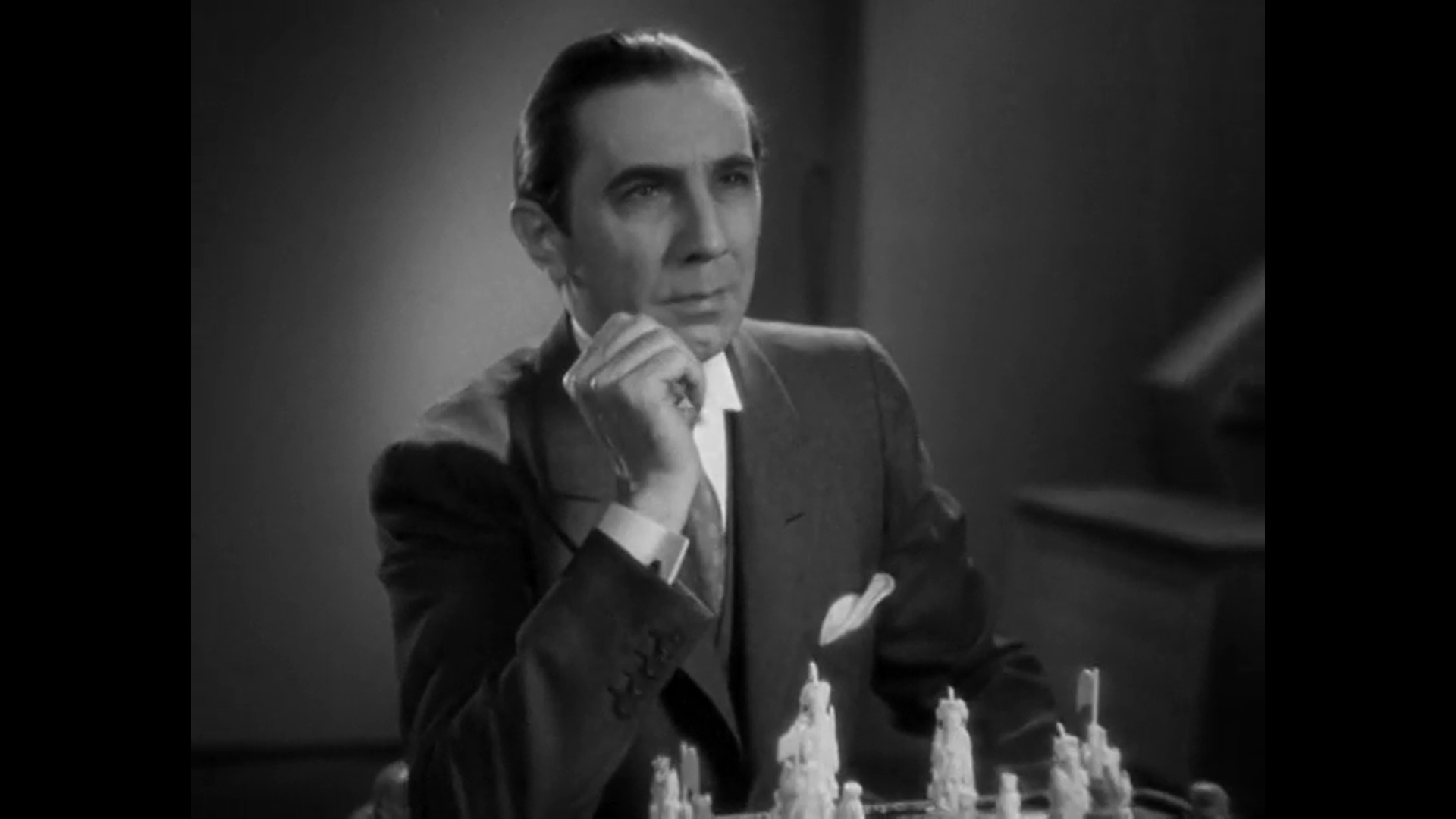 In 1934, horror legends Béla Lugosi and Boris Karloff graced the silver screen opposite each other for the first time in The Black Cat. Like their other iconic roles as Count Dracula and Frankenstein’s monster, The Black Cat was another groundbreaking addition to early horror, not to mention a huge box office hit.

The film was surprisingly dark for the time, brushing on themes of Satanism, rape, revenge, death by flaying, and even alluding to necrophilia. It was one of the last horror films to be released before the implementation of the Production Code Administration, which enforced Hollywood studios to comply with the strict Hays Code of film censorship, missing the deadline by a little more than a month.

The film tells the story of newlyweds Peter and Joan, who are traveling through Austria and Hungary on their honeymoon. They meet a kindly but mysterious Hungarian stranger on the train, Dr. Vitus Werdegast (Lugosi), traveling to the same destination. He tells them that he is returning home after spending 15 years in a cruel Siberian prison, and that he is on his way to visit an old friend named Poelzig (Karloff). 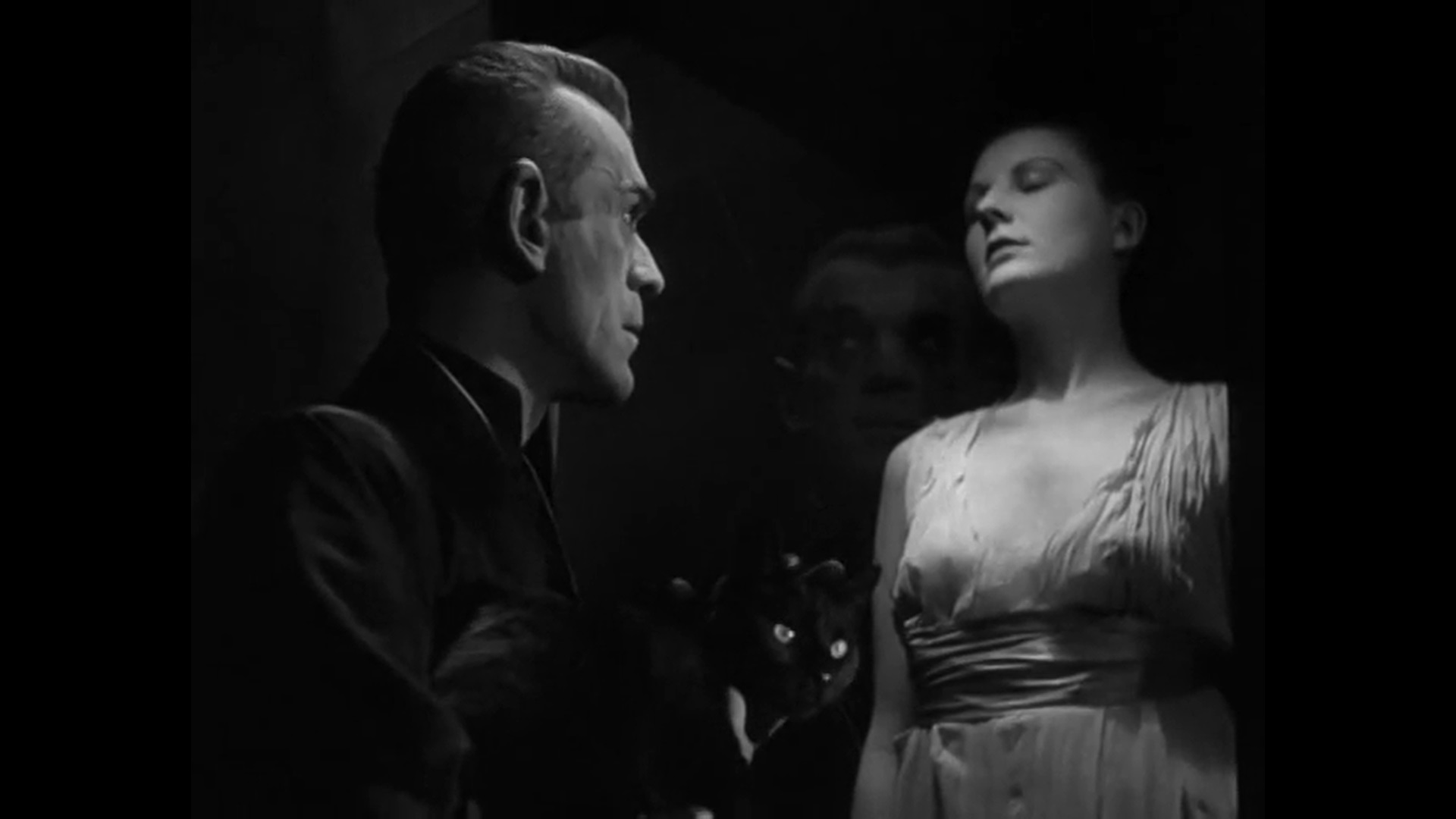 After their hotel shuttle crashes in a violent storm, the stranger brings them to seek shelter at Poelzig’s mansion. It only takes one night in the strange house before it becomes clear that Peter and Joan have gotten themselves caught in the middle of a twisted game between old rivals.

Though Edgar Allan Poe’s name was used to advertise the film, the story bears no resemblance to the infamous tale of the same name. The titular feline character makes only a brief appearance and does not seem to have any relevance aside from randomly triggering Dr. Wendegast’s ailurophobia and giving Poelzig’s home a sinister vibe. Using Poe’s story as a marketing gimmick relies on the hope that no one in the audience has actually read it (otherwise they would know that black cats are victims, not villains), but otherwise the movie holds up beautifully as a delightfully creepy story of international travel gone wrong.

You can find this not-to-be-missed classic for free on archive.org, or rent the HD version on most digital platforms. 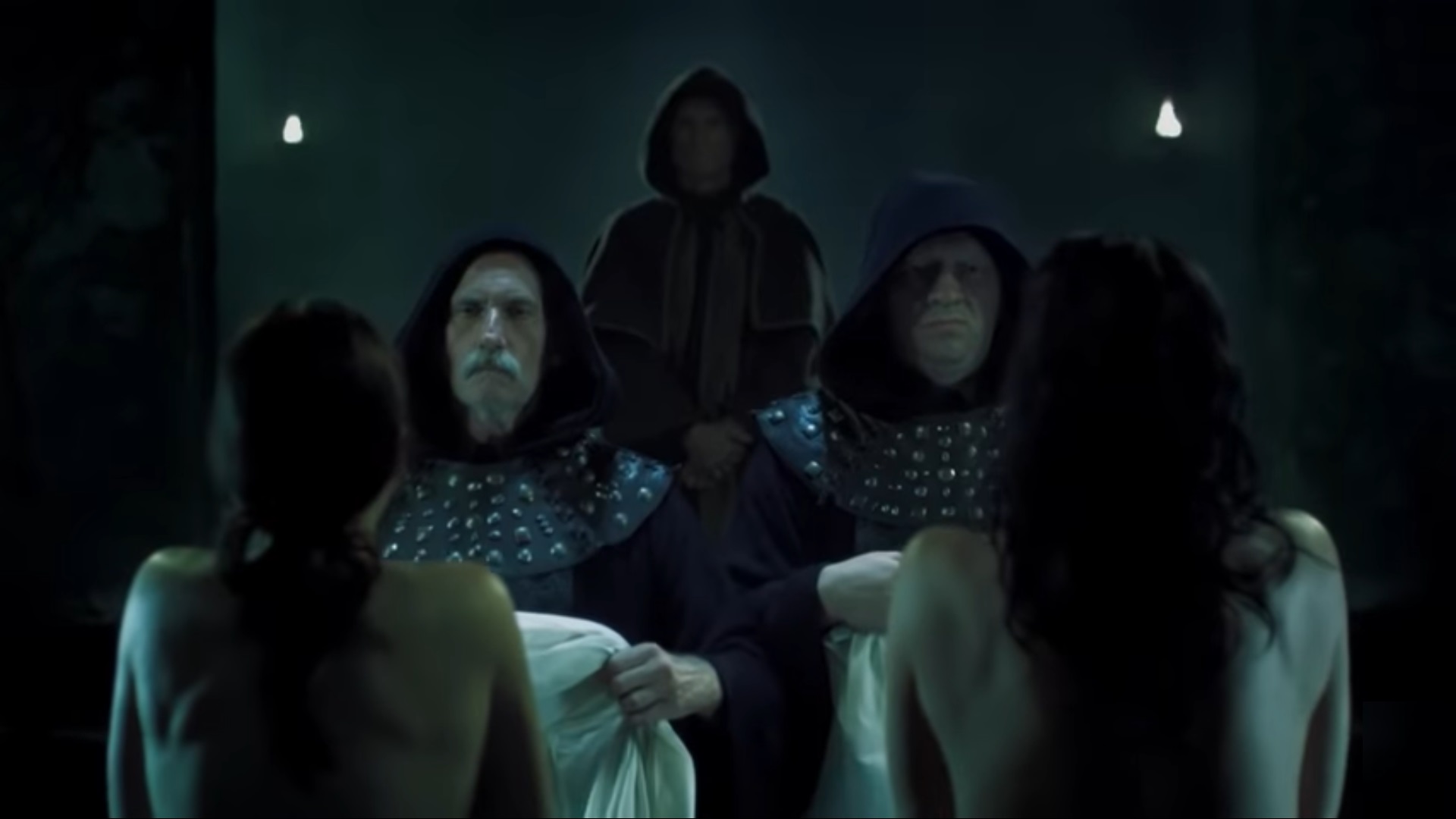 Aside from propagating the stereotype that Eastern Europeans are inhospitable to tourists, The Shrine offers some valuable lessons on what not to do while visiting a foreign land.

For one, don’t run around expecting everyone to speak English. In many cases, showing up to a place unprepared for the language barrier can result in some very awkward situations. In this case, it leads to deadly ones. The second lesson is don’t go tromping around off the beaten path where you’re not welcome. Unfortunately there are plenty of monuments and historical treasures that have been damaged by entitled tourists, and every culture has the right to keep certain things off-limits. Unless the souvenir you want to bring home is an ancient demonic curse, then it’s probably best to stick to the trail.

A young journalist, Carmen, drags her boyfriend and an intern to a small village in Poland in search of some tourists who mysteriously vanished while visiting the area. The visitors receive a rather cold welcome from the locals, which immediately sparks their suspicion. 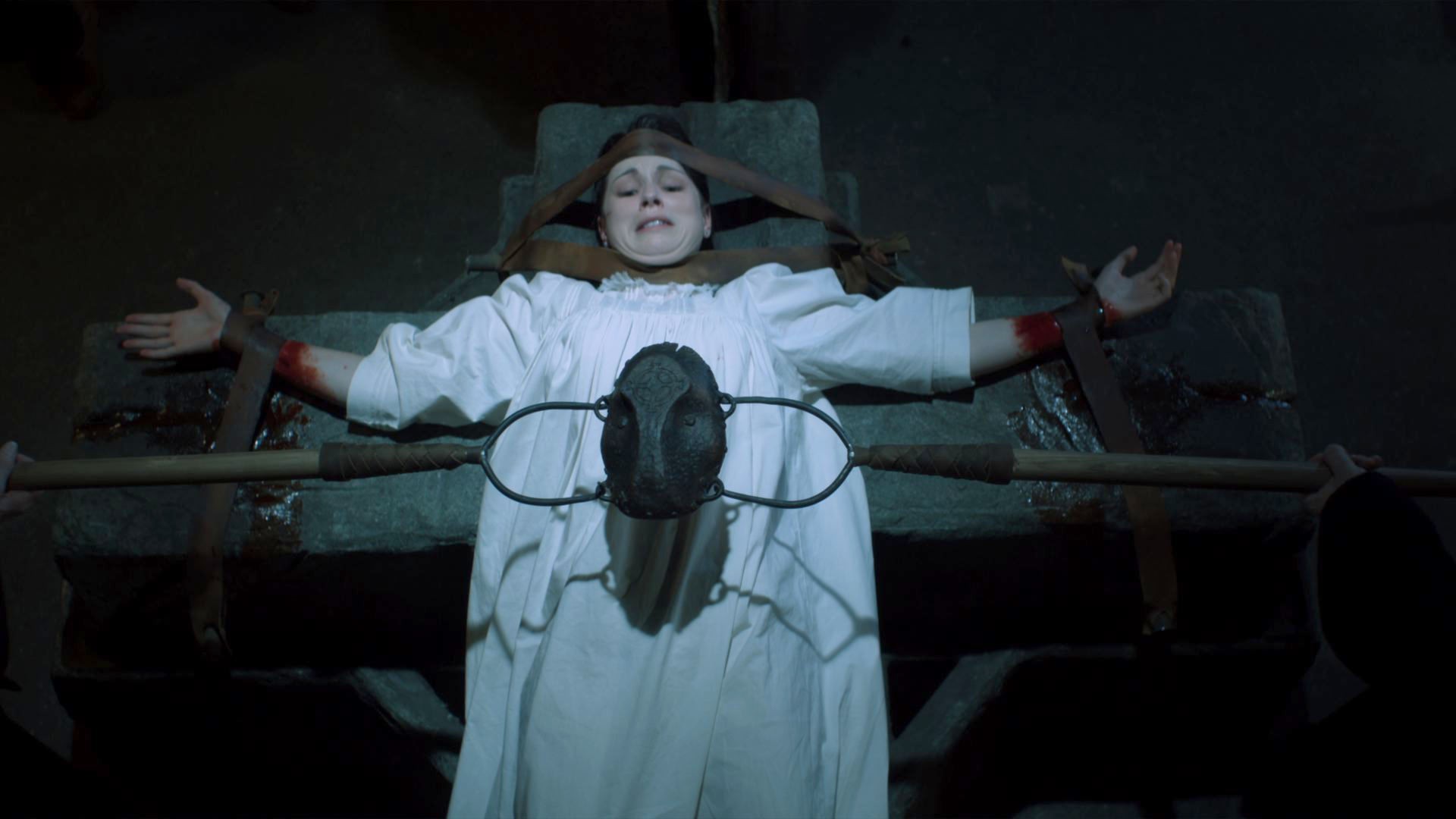 As they explore, they stumble upon a forest outside of town that is permanently encased in thick fog, where they encounter a creepy satanic sculpture that seems to induce terrifying hallucinations. Once they emerge from the forest, the group is confronted by the villagers, who are suddenly very intent on introducing them to some of their darker, more violent traditions.

The movie feels a bit low budget, with cheesy dialogue and mediocre effects. The cursed stone demon that unleashes all the chaos isn’t all that impressive. But when that thing turns its head…I still feel chills whenever I lock eyes with a statue! The ending is also worth sticking around for, which makes the movie an overall entertaining and worthwhile cautionary tale about the importance of respecting local customs.

You can watch The Shrine for free with an IFC Films Unlimited subscription, or rent it on most digital platforms like Amazon or YouTube. 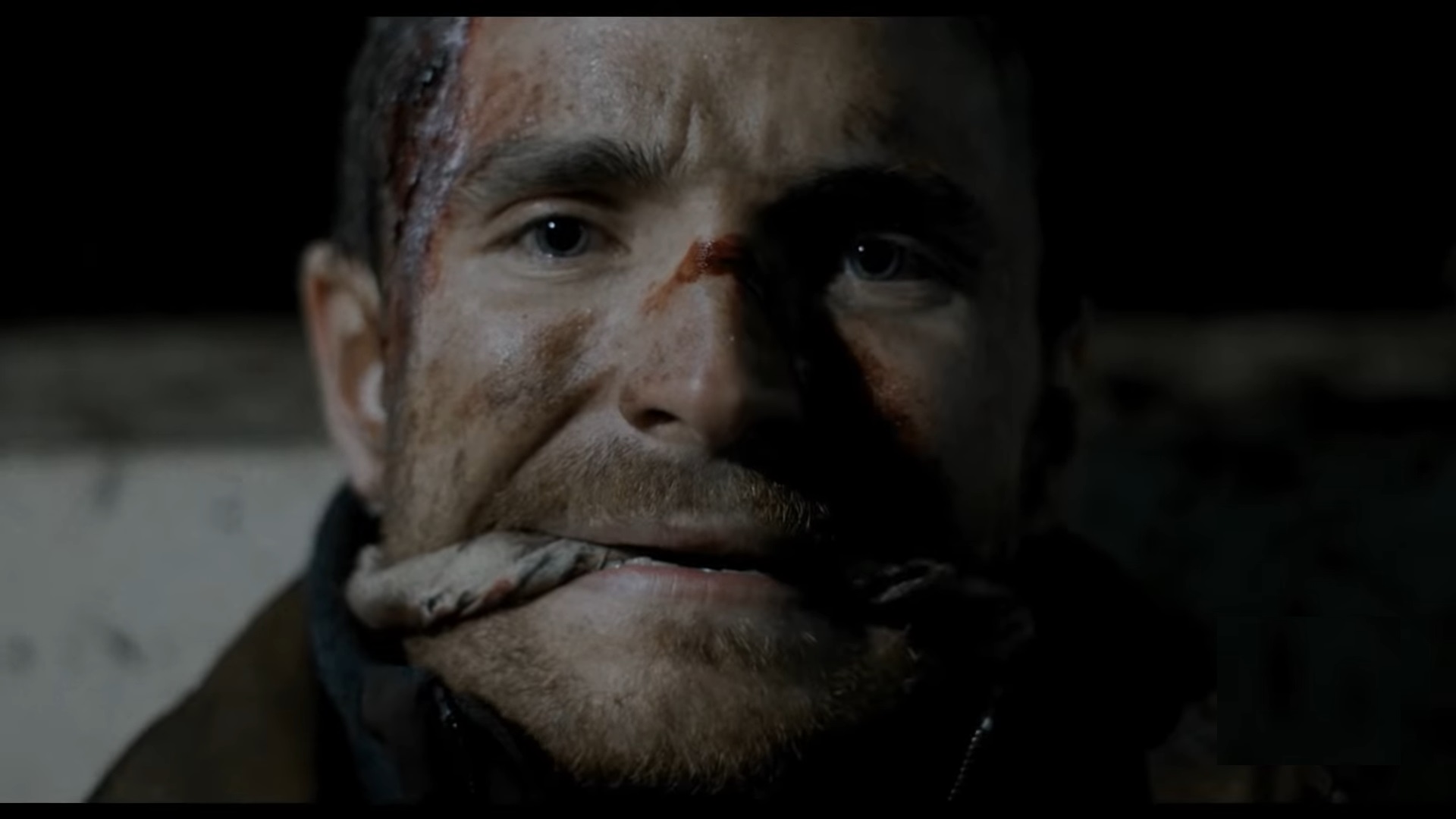 Calibre (British for “caliber”) is a warning about how even the best-laid plans can go disastrously wrong.

On a hunting trip in the Scottish highlands, Marcus on Vaughn end up accidentally bagging a very wrong kind of game. As the duo cover their tracks and try to project an air of calm and collected normalcy, they find out isn’t so easy to lay low when you are guests in a small town. No matter what they do to try and deflect attention, somehow they always end up sticking out like a sore thumb.

It’s a familiar feeling to travelers (though hopefully not for murder-related reasons), and even though it’s hard to empathize with Marcus and Vaughn’s increasingly poor decisions, one can empathize with the stress of being a conspicuous outsider. Their predicament illustrates how much we depend on the hospitality of the local residents of any travel destination, and how quickly things can go south when we wear out our welcome.

Marcus and Vaughn don’t even need to cross the border to find out how uncomfortable they can feel just a few miles from home. In many ways it’s a commentary on how city dwellers can disrespect rural communities—a story we usually see in the form of naïve urbanites fighting off murderous hillbillies and backwoods psychopaths. Only this time it’s not so obvious who the bad guys are.

The film is more of a thriller than horror, but the unbearable tension is enough to get your heart racing as fast as any slasher movie. It will leave you questioning your own values and your own resolve — what would you do if one little mistake could ruin your whole life? What would you do if…well, you’ll have to just have to watch the movie to see what other horrific ultimatums await the unlucky hunters.

Head over to Netflix to check out Calibre, and get ready to squirm. 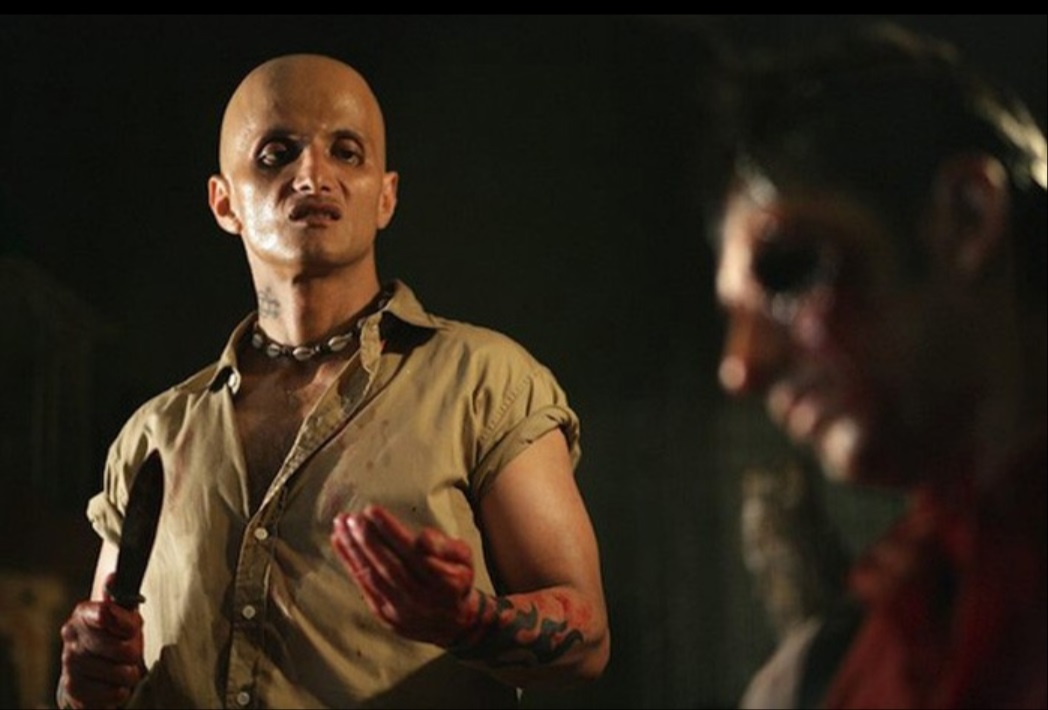 In 1989, an American college student on spring break named Mark Kilroy had the misfortune of crossing paths with a human-sacrificing black magic drug cartel cult. He was kidnapped, tortured, and ultimately sacrificed to the cult’s deities in order to ensure a successful drug deal. Borderlands is the fictionalized account inspired by Kilroy’s story, featuring Cory’s best friend Shawn from Boy Meets World (Rider Strong) as the doomed gringo, and Samwise Gamgee (Sean Astin) as a sadistic cult disciple.

Strong’s character, Phil, heads to the fictional Mexican border town of Manzanita with two buddies for a weekend of drugs, sex, and debauchery. After partying at a carnival while on a cocktail of drugs and booze, Phil ventures off on his own and is promptly whisked away by some extremely shady characters. His friends enlist some local women to help search for him, until they find out from a traumatized ex-cop that Phil is in store for something worse than they could have ever imagined.

The characters are intensely unlikeable, generally representing everything the rest of the world hates about the ugly American tourist. 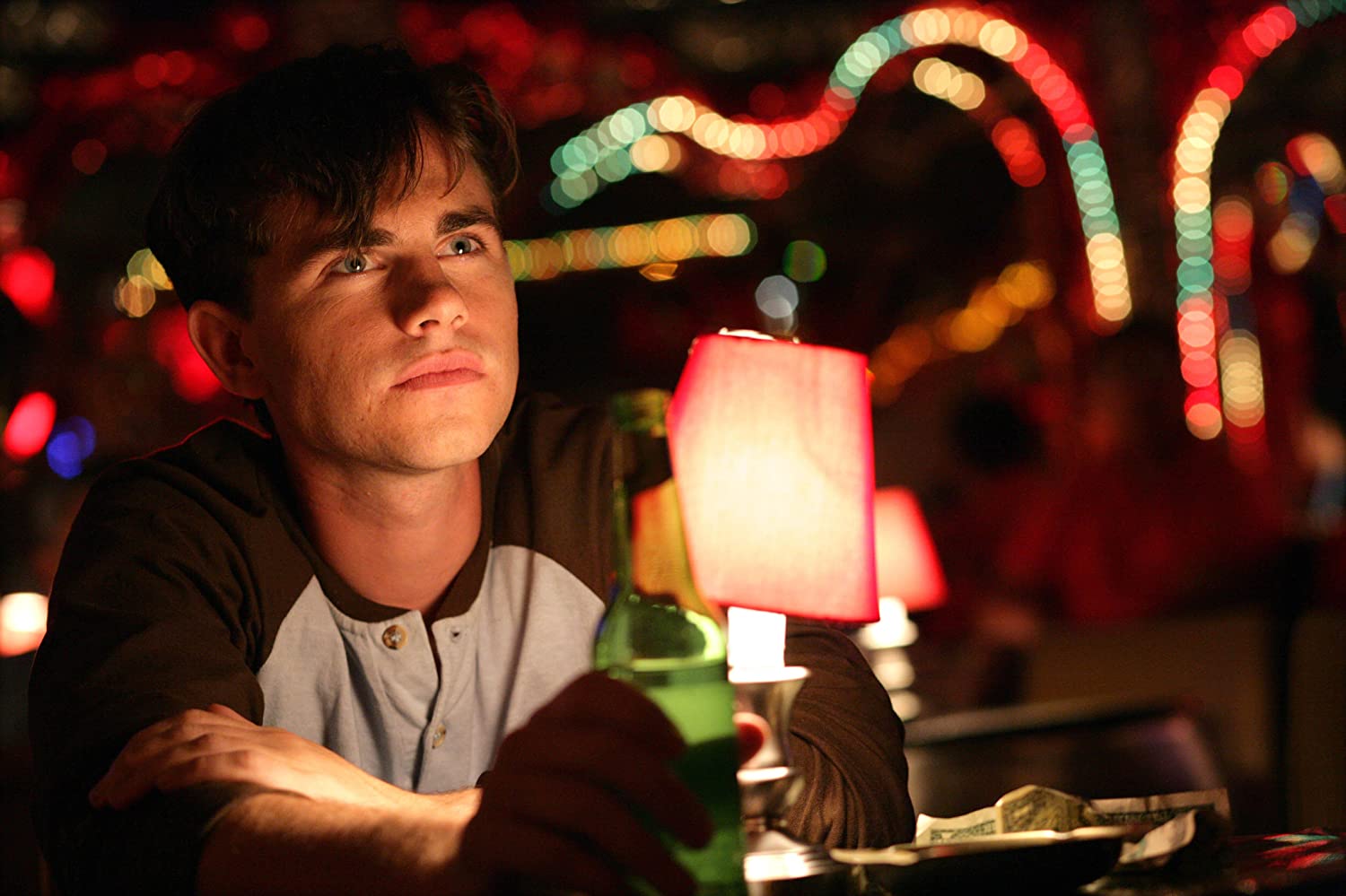 The boys treat the Mexican town like their own personal playground. Aside from Phil, none of the guys (who spend a lot of time bragging about their admissions into Ivy League schools) bother to communicate in the local language beyond a heavily accented “hola.” On the first day of the trip they’re already getting high, paying for hookers, and getting shanked in bar fights. They seem totally oblivious to the well-documented dangers that plague cartel-infested border towns, brazenly mixing alcohol with marijuana and hallucinogens and then running around town with reckless abandon.

After Phil’s abduction, his friends seem genuinely surprised to find out that frequent and unsolved disappearances are even a thing, so commonplace that the police barely bother to respond. If we can learn anything from these ill-fated young men, it’s that the consequences of stupid behavior are often amplified tenfold when traveling in a foreign land.

You can watch this grizzly, true-life inspired story for free on Tubi.

This list wouldn’t be complete without a quintessential slasher-in-paradise flick.

Though it was mostly reviled by critics, I can’t help but have a soft spot in my heart for 2004’s Club Dread from my college days when Broken Lizard seemed like the funniest thing ever. If you liked Super Troopers and Beerfest, you’ll inevitably get some fun out of the group’s foray into horror territory.

A decadent all-inclusive tropical resort (Club Med, get it?) is beset by a machete-wielding serial killer straight out a spooky campfire legend, who seems hell bent on ruining everyone’s fun. Meanwhile the ragtag gang of goofy staff members desperately try to root out the culprit as they get picked off one by one in absurd and horrible ways.

The humor is predictably juvenile. And the kills, while reasonably gory, are more lighthearted than terrifying (one victim gets gutted while dressed as a giant pear).

But it’s refreshing to watch a slasher film that pokes fun at the absurdity of the genre while still respecting its structure. It keeps the identity of the killer close to its chest like any good slasher movie should, and it stacks up a decent body count while encouraging you to root for the survivors (which are admittedly easy to predict, based on each character’s level of obnoxiousness).

Check it out and see if you can guess which of the Broken Lizard dudes (or Bill Paxton, who makes an appearance as a beach bum Jimmy Buffet wannabe) is secretly a murderous maniac.

Club Dread is currently available for free on Starz or to rent on your preferred digital platform.