Posted by:
Tags:  Boogeyman in defense of Laura Regan Terror They Wes Craven

A flop at its debut twenty years ago, “They” (Wes Craven Presents: They) is an overlooked gem that will terrify even modern audiences.

Spoiler Alert: I beg of you, if you haven’t yet seen the movie, go check it out now, even if you never come back and read this. It’s just that damn good.

The late ‘90s and early 2000s were not a great time for horror movies. Though many titles from that era are recognizable, few of them are considered very good, and even fewer are bona fide classics. Look at this list, and if you even remember any of them very well, tell me I’m wrong:

One of the things most of those movies had in common (besides mediocrity) was a tableau of GQ tweens on the poster giving bedroom eyes to the camera. By the time 2002 rolled around, it was time for a change. And change came in the form of some much-needed, grittier horror…

…Resident Evil with its action-packed scenes and sublime gore, The Ring with its slick Americanization of the groundbreaking Japanese ghost story from 1998, 28 Days Later with its fast zombies and badass soundtrack, the original and haunting American version of The Grudge, M. Night Shyamalan’s freaky alien movie Signs, and even some decent independent fare like Dog Soldiers and May.

With new material like that saturating the market, it was difficult for a little movie that could, like Wes Craven Presents: They to stand out above the pack. 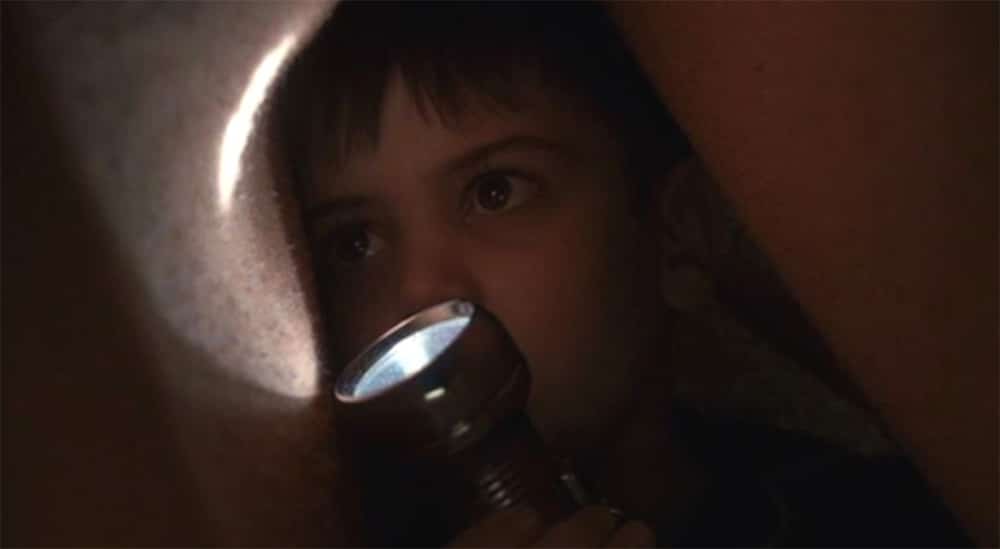 It came in 23rd for the month of December after being overshadowed by The Ring and the George Clooney vehicle Solaris on the horror front, as well as huge mainstream successes like Lord of the Rings: The Two Towers.

In the end, They only managed to make back $16.1 million against a budget of $17 million, making it a technical bomb. However, when you look at the competition it was up against, it’s easy to understand why.

Still, you can’t blame everything on competition; after all, The Ring was up against the same odds and is considered by most horror fans to be a modern classic and ended up banking almost a quarter of a billion at the box office. Then again, it did have almost three times the budget of They and an international market already supporting it thanks to the source material.

And what did the critics have to say about They?

Unfortunately, not enough good things to help it out (not that anyone should give too much of a damn about what the critics think). Reviews were more “mixed” than bad. And even though it retains a 4.5 out of 10 on Rotten Tomatoes, that’s only based on 57 total reviews, a tiny sample size, and a mere quarter of those for The Ring —  which sits at a not-that-much-higher 6.6, comparatively.

In other words, you can’t really go off They’s box office performance or its critical reception if you want a fair idea of the true quality of the film. 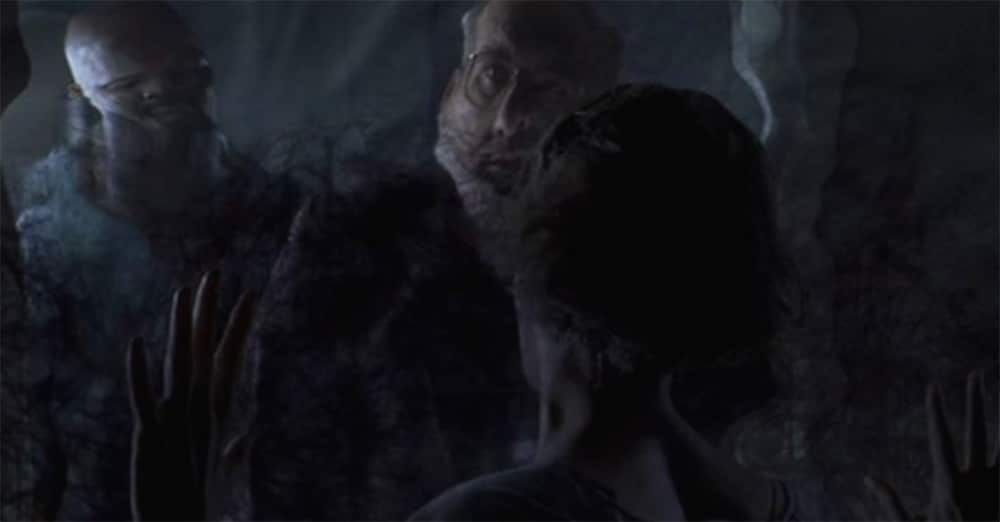 The best thing you can do is what I did, which is to watch it and make up your own mind.

Even if you saw it a long time ago, there’s a good chance you may have lumped it in with the other, similarly marketed movies during that period and didn’t give it a fair shake.

Perusing the old reviews, what I saw most lambasted was its alleged lack of originality, even though I have yet to find another film about night terrors besides a documentary called The Nightmare (2015), which is more focused on cases of sleep paralysis and a couple of in-name-only low-budget stinkers from 1993 and 2014.

There are other films with similar themes, to be sure, such as Darkness Falls (2003) and Boogeyman (2005). But not only did those come out later, they are also objectively worse (by all critical and audience metrics).

But despite its actually having an original premise, some pretty decent FX for its time, and horror maestro Wes Craven’s name attached to it, for whatever reason, THEY failed to connect with audiences.

So why bother digging it out of the closet now?

Well, not only did the film just celebrate its 20th anniversary (November 27, 2002), but it also happens to be my personal favorite horror movie.

So, in much the same way I talked up Rockula (1990), which is my favorite horror comedy musical romance movie of all time, I couldn’t pass up the opportunity to show some love for a film that I have watched at least a dozen times and which still scares the shit out of me.

WHAT MAKES IT SO SCARY? 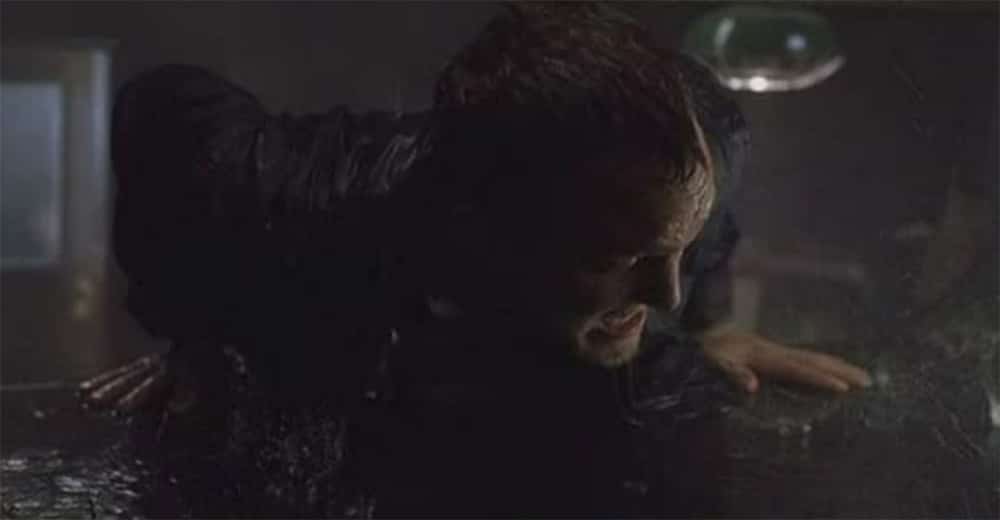 For starters, it begins on a dark and stormy night in a little boy’s bedroom, with a cracked open closet door and a room full of scary-looking toys (no wonder the kids in these movies always wind up traumatized).

Mom leaves the bedroom door open a crack after checking under the bed, but soon the kid (Alexander Gould, the voice of the title character in Disney’s Finding Nemo) is alone in the dark with nothing but his blanket and a malfunctioning flashlight for protection…and wouldn’t you know it, the boogeyman comes after him.

Fast-forward to 2002 when the kid is all grown up, only now he’s certain that whatever was after him then (and caused him to disappear for two days) has come back for him for some sinister, unknown purpose.

He reveals that the night terrors they both suffered as children have been plaguing him as an adult and that he believes “they” are coming for him.

Explaining that he’s been doing research on whatever has been tormenting him and that he hasn’t slept in days, he warns Julia to watch for the signs of their return (such as malfunctioning electronics, crying babies, and flickering lights) and then commits suicide in front of her.

Julia seeks comfort from her boyfriend, a paramedic named Paul (Marc Blucas, Buffy the Vampire Slayer) but soon starts experiencing unusual visions of her own. 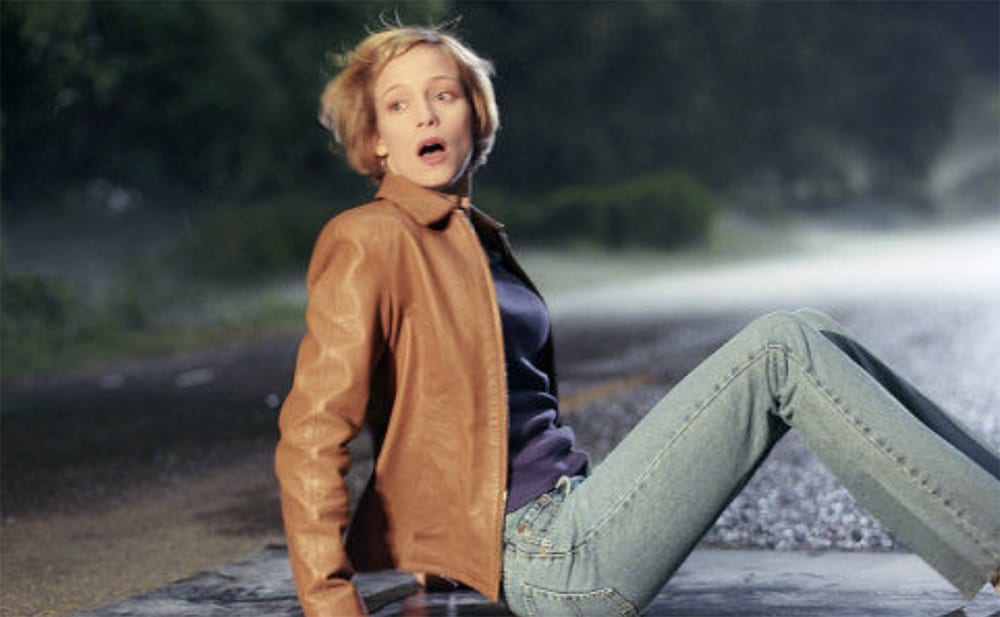 Her visions include a portal behind a bathroom mirror that leads to a nightmarish dimension filled with dark, hideous creatures, the same kind that spirited Billy away during the film’s opening.

The next day, at the funeral, she meets two friends of Billy’s, Sam (Ethan Embry, Empire Records, Can’t Hardly Wait) and Terry (Dagmara Dominczyk, The Count of Monte Cristo, Kinsey).

They also had night terrors as children