Christine Elise McCarthy is a multi-talented woman. She’s not only a well-known actress, but she’s also a dog mommy, animal advocate, YouTube vegan chef, author…the list just goes on. I’ve been a fan of Christine since her early days as Emily Valentine on the 90s hit, Beverly Hills 90210, and I’ve been very lucky to have conversed with her on several occasions. Christine is also known among us horror fans as Kyle in the 1990 film Child’s Play 2.

In celebration of Women In Horror Month, we discussed Hollywood, her return to the Child’s Play series, and of course, horror movies. 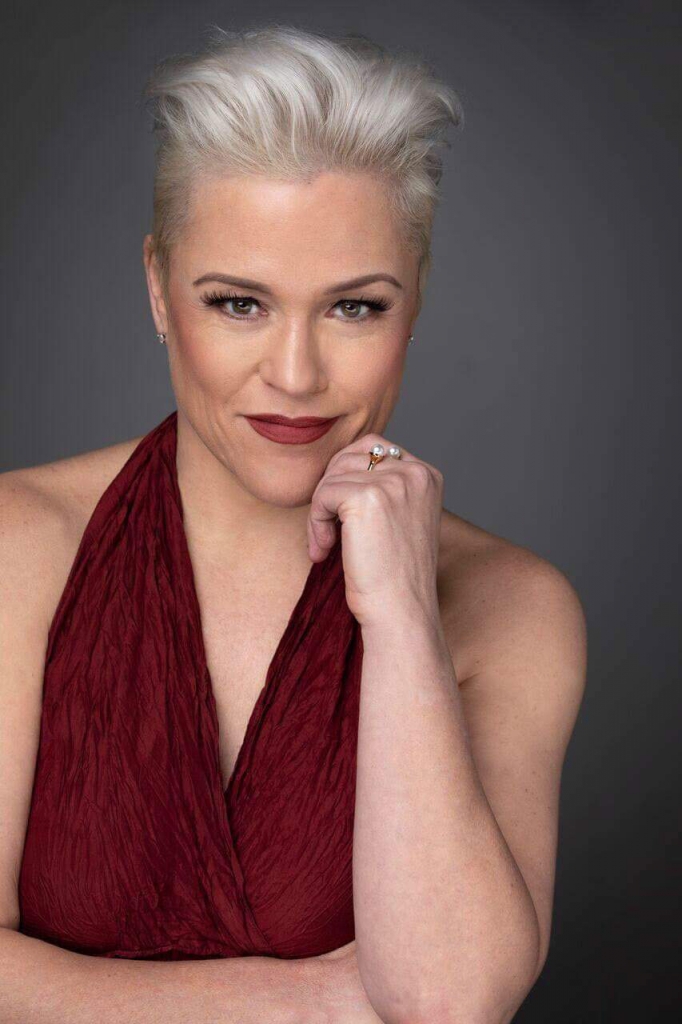 1. You started in television. Was it always your goal to make movies?

Born in Boston, I initially went to Boston University as a film major with the intention of becoming a director. After a year there, it seemed inefficient to finish film school in a town with no film industry, so I moved to Los Angeles. Nineteen AND on my own, I soon found myself working 60 hour weeks at $6 hr just to pay the rent, and film school became an apparition on a horizon I could never reach. After two & a half years of this, I decided to take acting classes at night – still as a part of preparing myself to direct.

Typically cripplingly shy, I was surprised to find I really enjoyed it – acting, that is. I thought, “Actors that are talentless and untrained make a living every day. Why can’t I be one of them?” So – I adjusted my goals & pursued acting. I had early success, primarily because I was in my early twenties & looked fifteen. I was told, in 1986 or 87 that I was too edgy for TV but that I would do well in film. That was what I wanted, anyway, so I was pleased to hear that. Then, I went on to have a very mainstream TV career and a smaller film career — which is great, too. 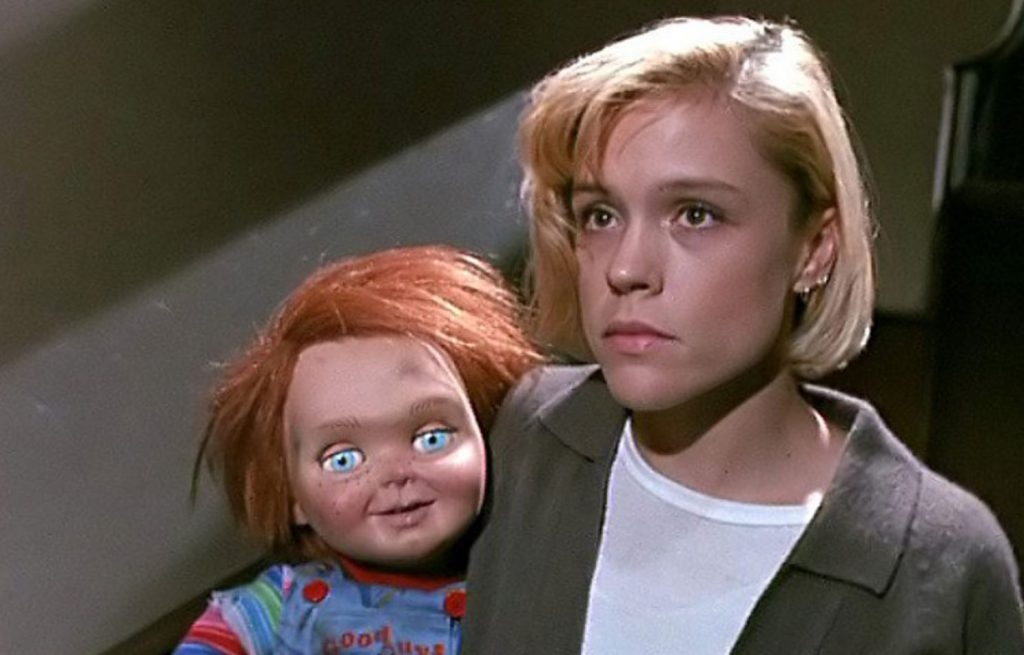 2. What made you choose horror for your first film, Child’s Play 2? Were you a fan of the first one? Were you a horror fan?

I did not see the first one until I got Child’s Play 2. I was not a huge horror fan, no, but I really enjoyed Child’s Play. That said, I might be even more excited to be BACK in the franchise that was about my initial invitation to play Kyle — and I was UBER excited to do Child’s Play 2. I have always stayed friends with Don Mancini, Alex Vincent is like my real little brother, and I am a huge fan of both Fiona & Jennifer.

We are a family of misfit toys, and the possibility that the franchise will make the leap to TV is incredibly thrilling. The opportunity to play the same character 30 years later is a rare & exciting one. And telling 8-10 hours of Chucky story in as many weeks as opposed to the 7 films that were made in 31 years is a lot to wrap one’s head around. FINGERS CROSSED! 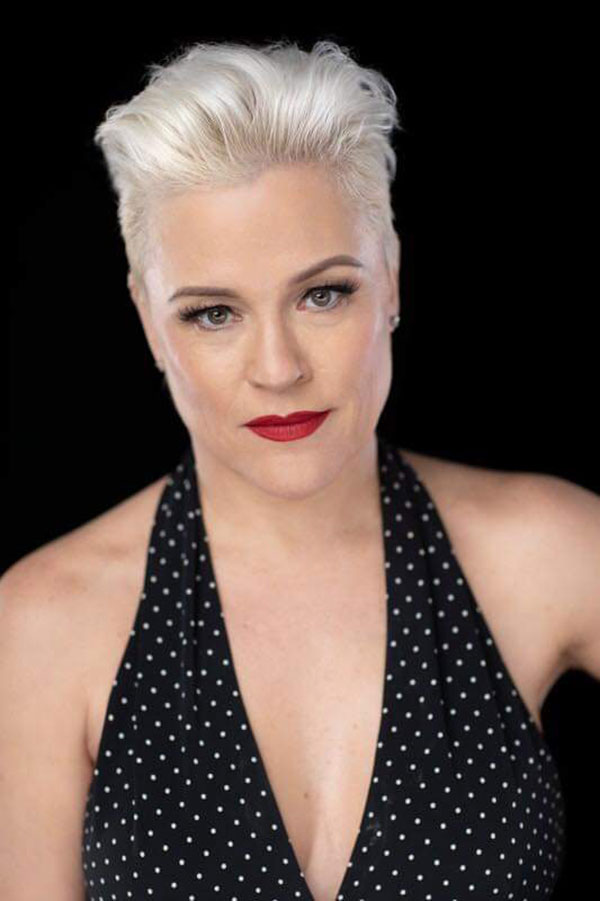 I have never been in the position to pick and choose projects. I have always just been a working actor that accepts nearly every audition and takes every job offered. I have been very fortunate & got hired to do some great projects, but that is not to say that I have my own dream career. I would prefer to have a huge body of work with range & power — and longevity. I wish I had Oscar-level titles on my resume. I do not, and that has nothing to do with my own tastes or ambitions.

3. Was it hard to keep your return to the Child’s Play series a secret?

Yes, because I was asked almost every day if I was going to be in it. And — since Alex returned in Curse — folks were expecting another character return. Don Mancini (the writer/director) forbid me to say I WAS in it and that I was NOT in it. He suggested offering nothing more than a coy smile. But — that does not work in responding to typed questions on social media. It was torture.

4. What are some of the challenges women face in the industry?

Ugh. Hollywood is a boys club…really. Still. Often very sexist & terribly agist. How many women have been Oscar nominees for directing? Also, the facts are that there are far fewer meaty roles for women. Studios often fear women cannot carry films. And AGING — women are not allowed to age. This is a topic that hits close to the bone for me, but reading Scarlett Johansson express fears that her career will end after the age of 25 is the fucking height of depressing considerations.

And plastic surgery has become a real problem — for men sometimes, but definitely for women. HD is great for sports, but it is brutally unkind to anyone who is not regularly described as “dewey” or “an ingenue.” Film — ACTUAL film stock — is far more generous but seldom used anymore. Fucking HD can blow me. Hahahah! 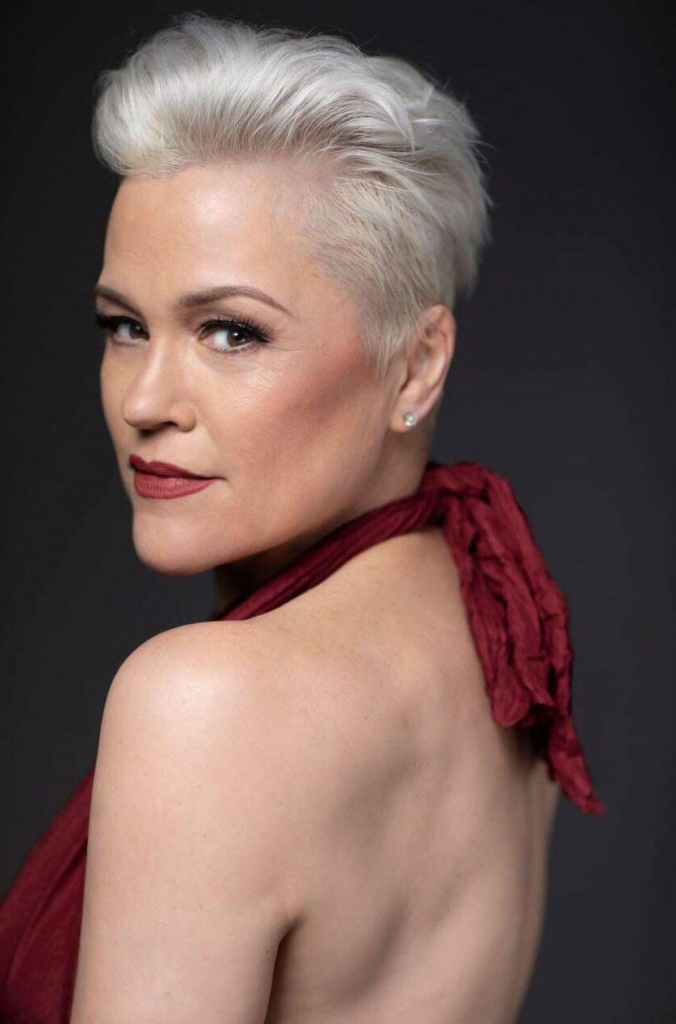 5. What does having a Women In Horror Month mean to you?

Honestly? I did not know there was one, and it has no real meaning to me. I mean, does anyone really care about “National Puppy Day” or any of the “holidays” like that? But, what I have discovered by attending horror cons is that, overwhelmingly, the ladies of horror are smart, funny, supportive, and delightful. I am VERY proud of my humble place in that community. And I am SUPER grateful for my membership card in the community called “actors.” I am at cons more than I am on sets (very sad but true), and so it is at conventions that I feel most like an actor these days. And having actors I admire treat me as a peer — as an equal — is flattering & gratifying. 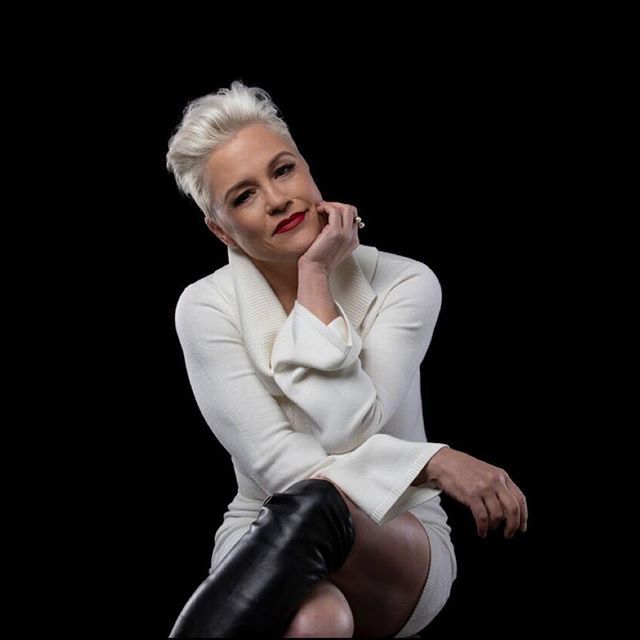 6. You’re a huge advocate for animals and fostering. How did you get involved with fostering?

Sarah fucking McLachlan & those “Arms of an Angel” ads urging pet adoption fucking my world up one too many times, and I began looking for a pug to rescue. There were only two that I could find online — a fawn baby boy & black girl pair of siblings, with terrible mange. A woman named Nikki had them. I wanted the boy, but she really wanted them to go as a pair, and I relented. I adopted them both.

I have adopted 5 dogs from her, at this point. Maybe 7 or 8 years ago, she needed to leave the country to deal with her visa & asked folks to foster her rescues so they would not have to go back to the pound. I took one, Baxter, who was adopted by my friend Alyse. Since then, I have fostered about 15 dogs. I have one now, a boy from Uruguay named Lucho. He lost half his face in a dog fight in S. America. He is healed, healthy, happy and looking for his forever home. He is one of the sweetest dogs I have ever known. And Nikki has grown from a one person operation to a huge network called Road Dogs & Rescue. Check her out on Instagram, @Roadogs. 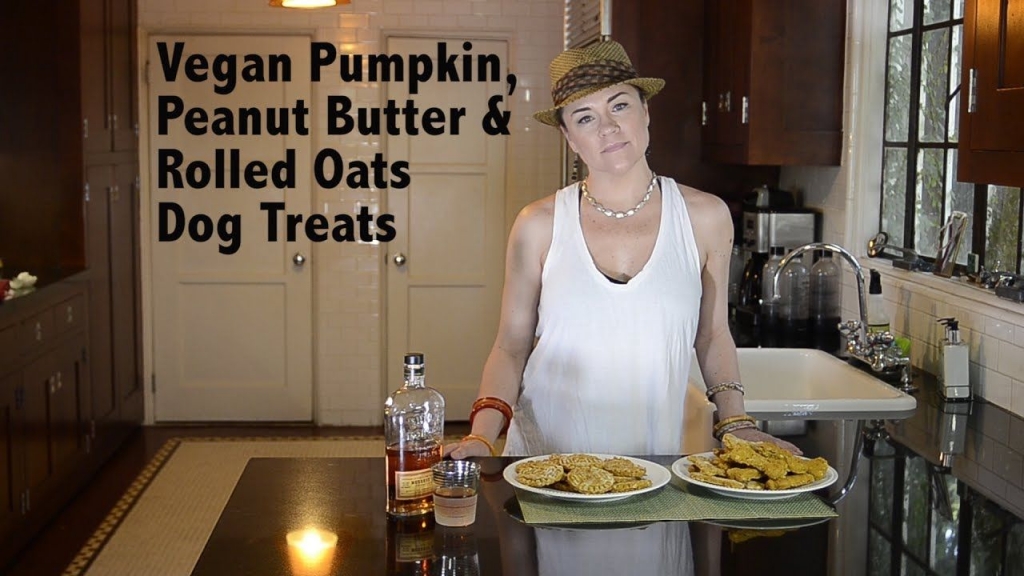 7. You’ve recently started a vegan cooking show, Delightful-Delicious-Delovely. Have you always had a passion for cooking? What’s your favorite dish?

I started cooking when I gave up meat in the late 80s. My channel is a vegan cooking show geared toward meat eaters. You can find my videos at www.VideoVegan.com or visit my blog at delightfuldeliciousdelovelyblog.wordpress.com/. My favorite foods are pizza, Indian food & various Asian foods — and pasta. I have no favorite dish.

8. What are you currently working on?

Working on getting a job as an actress. 🙂 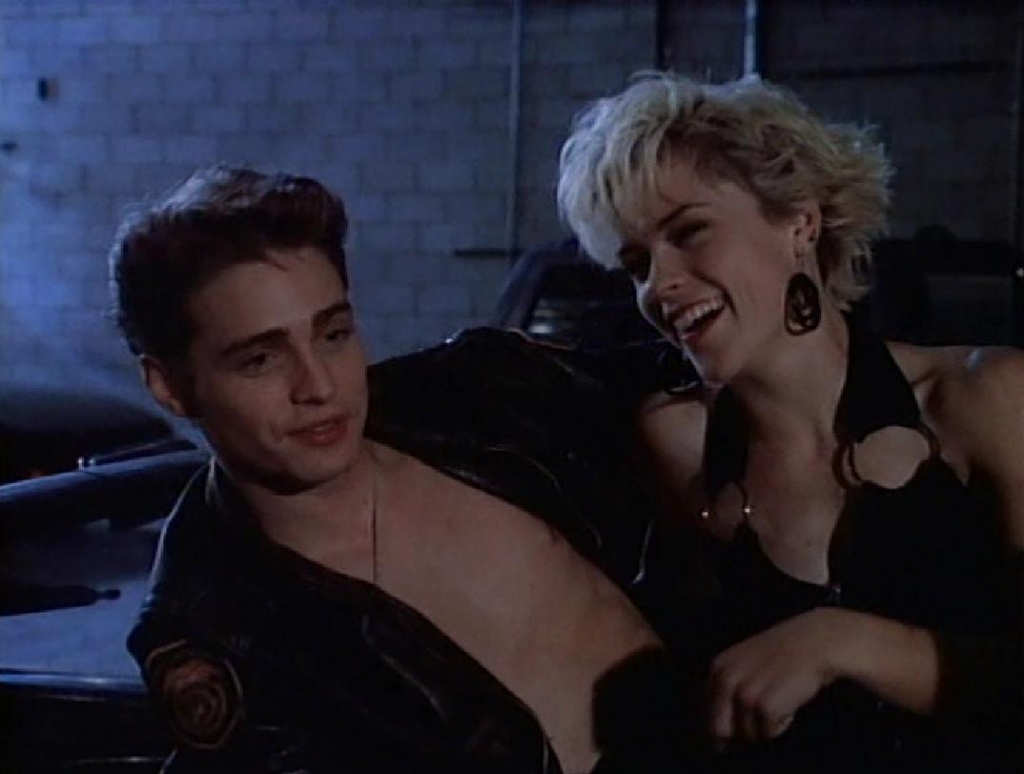