Behind the Lens: Rebekah McKendry

We talk with Rebekah McKendry, the wickedly smart and talented co-writer/director of the new holiday horror anthology, “All the Creatures Were Stirring” 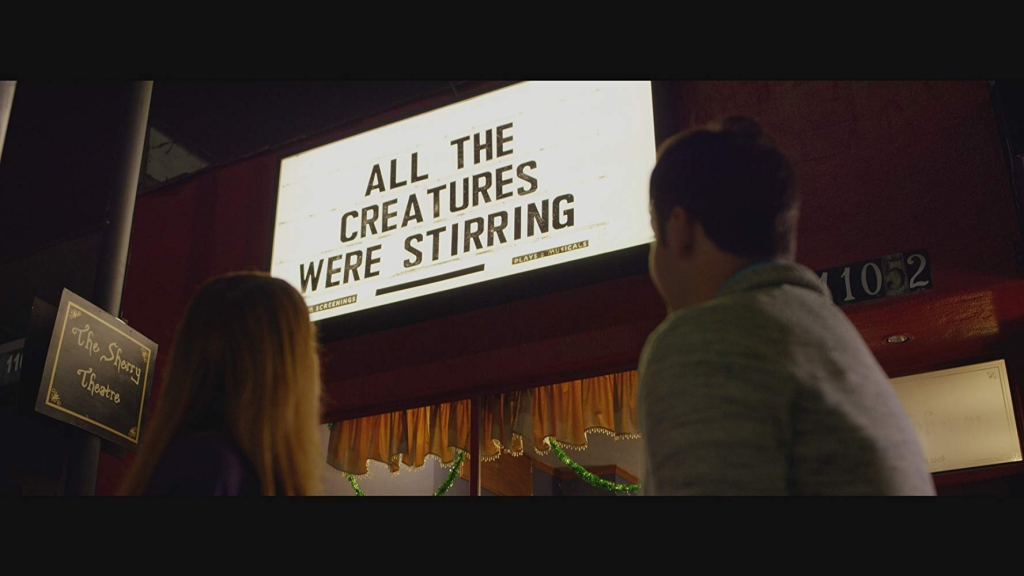 The joyful spirit of the holidays takes a grim turn with All the Creatures Were Stirring, a satirical and entertaining new film from Rebekah McKendry and David Ian McKendry, now available everywhere.

I had the honor of talking to Rebekah McKendry about her and husband David’s first feature film, that just happens to be a new favorite of mine; a hysterically funny Christmas horror anthology. All the Creatures Were Stirring is a must-see holiday comedy! I hope you enjoy my interview with Rebekah as much as I enjoyed talking to her. 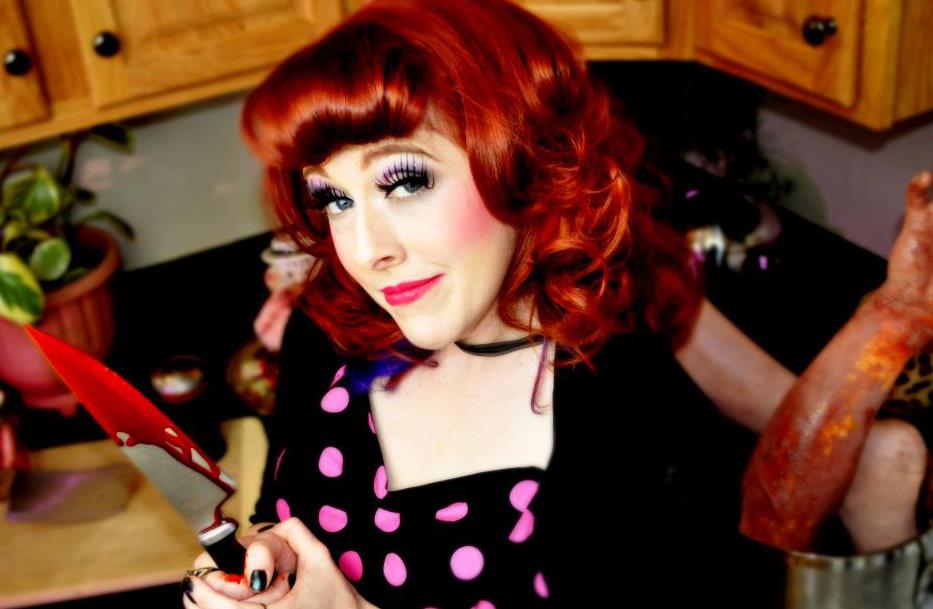 Los Angeles Zombie Girl: First off, I absolutely loved All the Creatures Were Stirring. I adore Christmas horror and comedy, and there is always room for more!

Rebekah McKendry: Of course and thank you!

LAZG: So why did you decide to make a horror film? Are you and David serious horror fans, did you watch horror when you were kids? How did you get to this point?

RM: Well, we’ve both been working in horror for over 15 years now. Dave and I started out making music videos, and then we worked at Fangoria for over a decade. I was the executive director of marketing there and Dave worked in our video production department. After Fangoria, Dave and I both went to Blumhouse for a stretch. I was editor in chief there, and Dave was a writer and ran our video stuff for the website.

I have a PhD and focused on horror, so now I teach horror cinema at USC. We have both been raised in horror for the past two decades, and we love it so much. It’s actually one of the reasons we got together in the first place. We bonded over horror on the set of Anton Checkov’s The Cherry Orchard back in college and realized that we were both just huge cult movie fans. Horror brought us together. 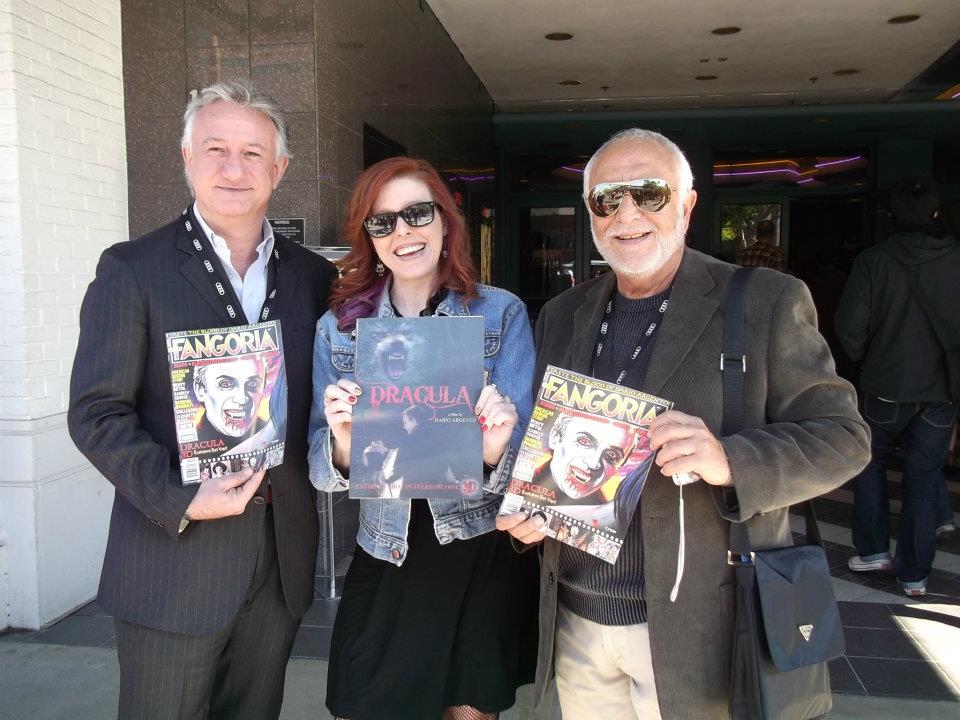 LAZG: So, what made you decide to do an anthology as opposed to just a full-length film?

RM: We talked about a couple of different options, and Morgan and Joe at Fallback Plan Productions texted us and said, “We would love to do a movie with you guys, bring us in a couple of pitches.” We pitched 3 – 5 different concepts, one of them being a Christmas anthology film. When we did the original pitch, I think we brought three segments. Only one of the segments made it into the movie. But once we started working with them, we sat down and looked at what locations we had readily available, actors we wanted to work with, what the sales were at the time, what we thought would be trending, and they ended up taking the Christmas anthology. So that’s the one we rocked on. 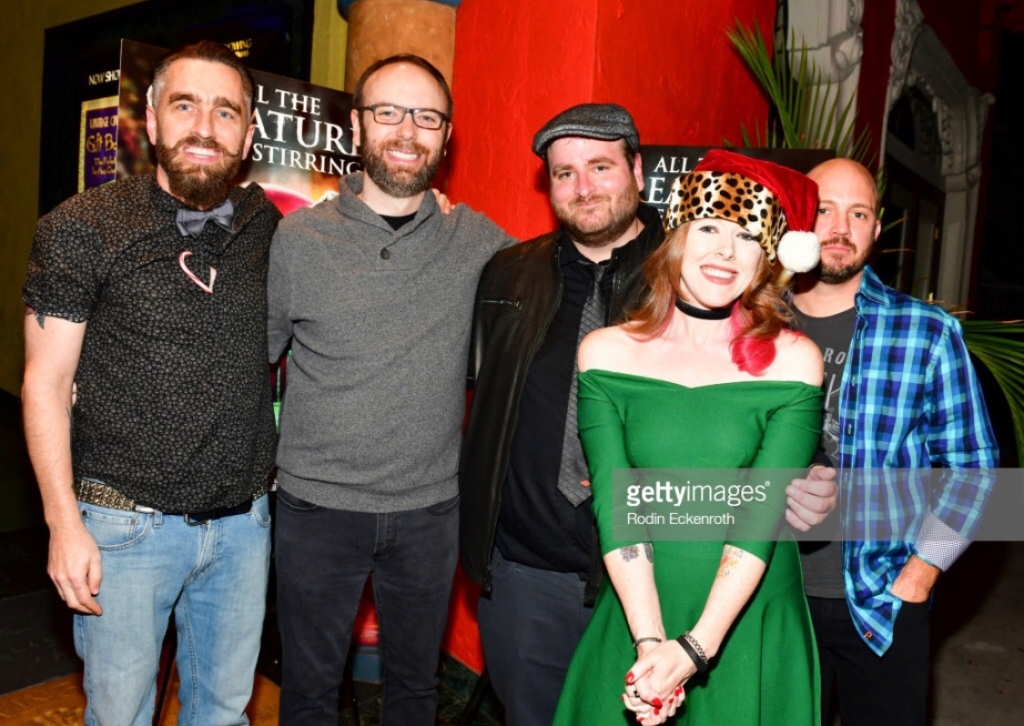 LAZG: Can you tell me a little bit about the making of the film?

RM: We shot All the Creatures Were Stirring over the course of several months. Dave and I knew we wanted to work with sitcom actors, because it’s a horror comedy. So, we started doing our casting – we had cast Jonathan Kite and Amanda Fuller first. Jonathan was on 2 Broke Girls at the time, and Amanda was, and still is, on Last Man Standing.

Constance Wu from Fresh off the Boat and the other people we really wanted to work with were on much bigger projects. Graham Skipper was on a couple of films at the time, and so was Matt Mercer. So we had a choice. We could either shoot this in two weeks like a normal film and not necessarily get the cast we want, because we have to shoot it all right now, and they aren’t available. Or we could do it spread out, so we can work with people’s schedules, especially the sitcom actors. And that’s what we ended up deciding to do. 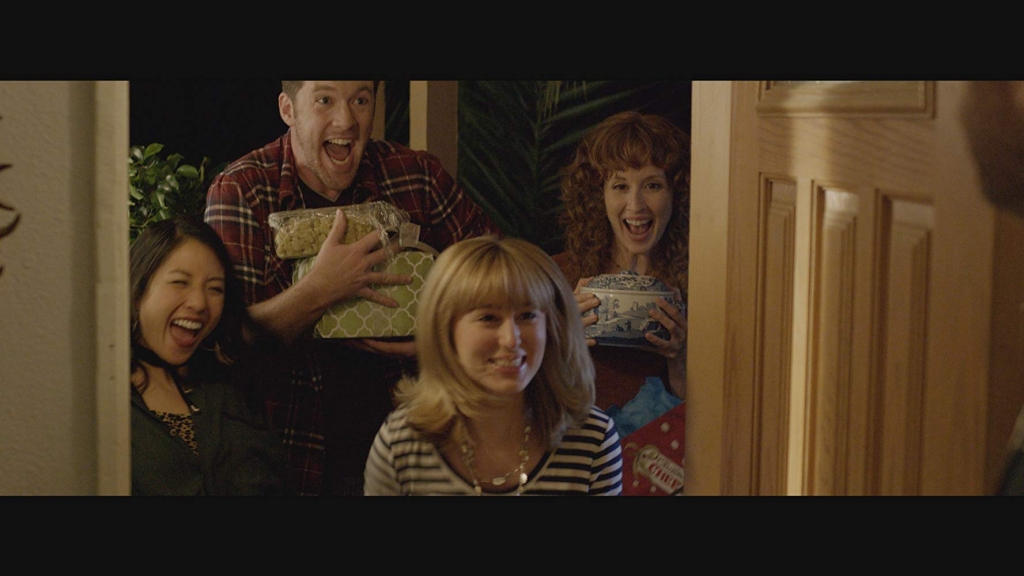 So, we spread it out. Most of the segments were shot in three days. We would do 2 -3 days depending on when Amanda Fuller, for instance, had a break — we could shoot right then. The first half of the shoot, I was pregnant…really pregnant. We shot up until nine months, and we literally stopped shooting two days before I gave birth. After I gave birth, we took a couple of weeks off, and then we were right back at it. After my son had his first set of immunizations, I brought him to set with me, and he had a set nanny. It was a trip.

To create the movie, once we knew we wanted to do a Christmas anthology, Dave and I sat down and created probably 20 different segments that we wrote and had ready to go. Then we went through and started picking the best five, knowing that we’d have five segments in the final movie. We picked the ones that were the most different from each other. We knew we wanted each one to feel completely different from the one before it.

Then we also were looking at things we had available, that were within our budget range. You know, like we can’t afford to shoot this one that’s on a boat in the ocean, so let’s go with the office instead. Things like that. We had to make a lot of decisions, but we gave ourselves a lot of options going in, so we could kind of look at it and see what worked best. 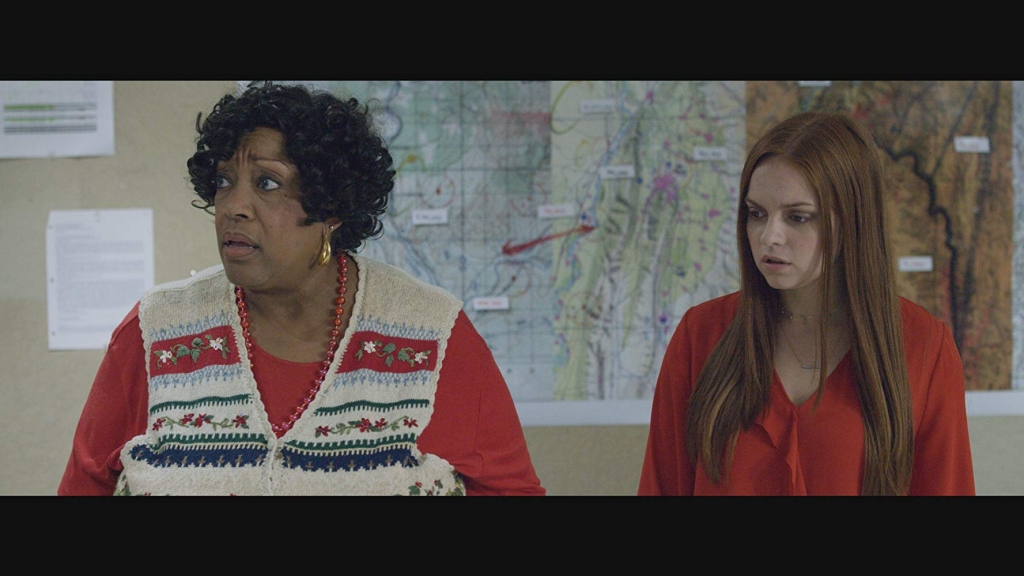 LAZG: Was there anything unusual or funny during the production?

RM: It was a pretty straightforward project. Well, being really pregnant was always fun. Oh, I do have some wonderful shots of Dave walking around with the stuffed reindeer. He had to carry that thing all around Hollywood for the shoot. We shot the office segment at the time when I was working full time at Blumhouse. I asked them if I could use a conference room in one of our buildings to shoot the conference room scene in, and they were like “yeah sure”. They were really supportive in everything.

Oh, also, I knew that I needed to shoot somebody in the head. I knew I needed Chase’s head to have a gunshot wound. Because it was not my office, it was my employer’s, I was so conscience of the blood. Blood could not hit the ceiling! We had like temp rugs down, so if it hit the floor we knew that it would be ok. And it was a dry erase board behind him, and we could totally get it off the dry erase board. 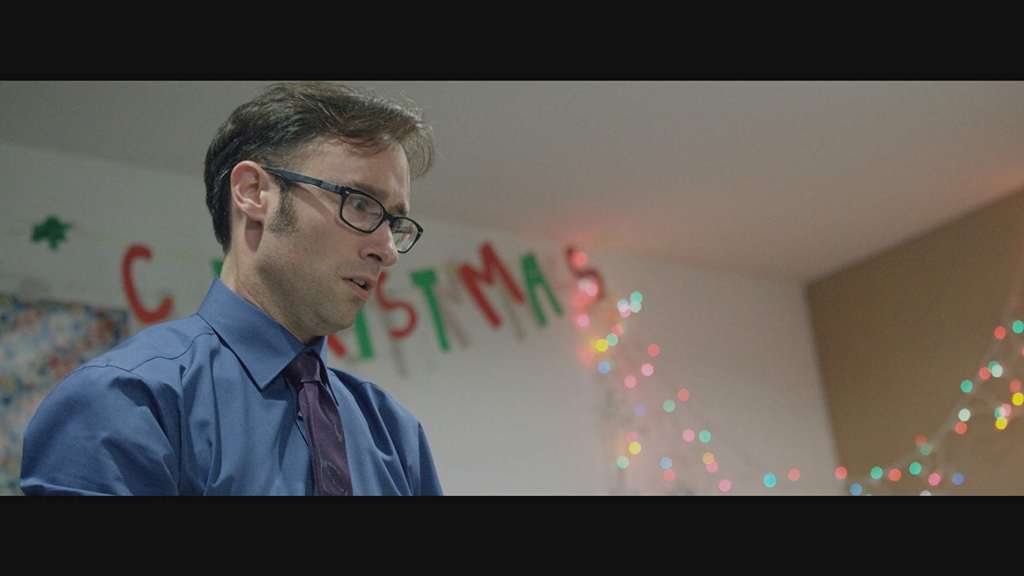 So, we were measuring distance from ceiling to floor, versus how high the blood can shoot. We tested all the blood cannons that we were gonna use in the parking lot, before I would bring them inside. One of them shot 80 feet up in the air and exploded against the back wall, and we knew immediately that’s not the one we’re gonna use! So that was fun, testing blood cannons in the parking lot, finding out which one had the best trajectory, which one we could control. Blood cannons: they are fun.

LAZG: The transition you used to wraparound the segments, the actual play, was terrific and so funny!  Do you like going to black box type theaters?

RM: Dave and I were theater majors back in college. We met doing theater, and the theater department we were in was very experimental theater-based. So we were in a ton of those kind of weird minimalistic theater productions. We had always found them fascinating and yet hilarious. So, we knew that was a perfect starting point for us and would be a fascinating wraparound. 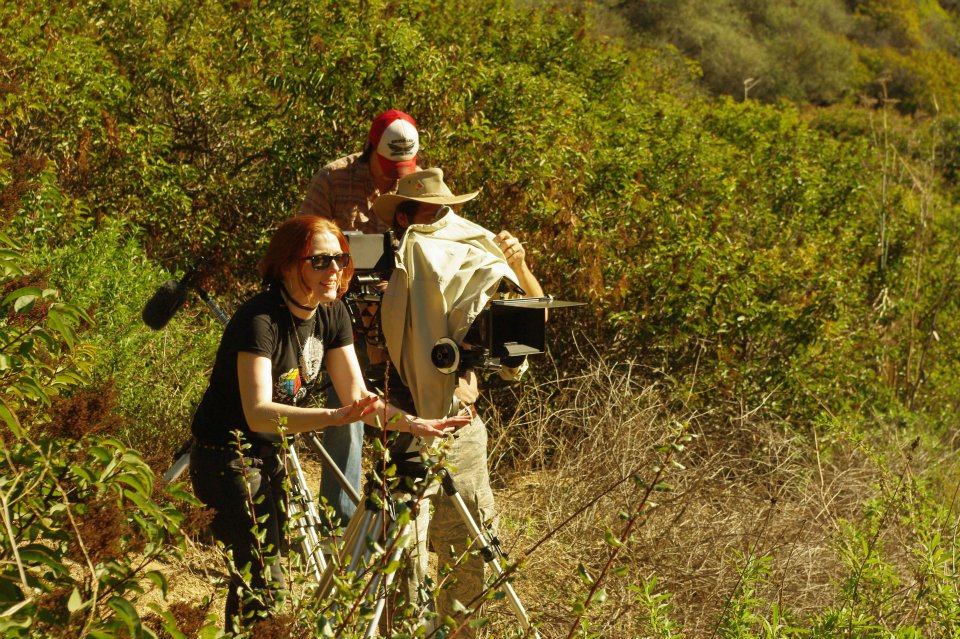 LAZG: As a woman working in the horror industry, what can you tell me about that experience?

RM: That’s a very big question. To be honest I never, until it became a thing years ago, I never even thought of myself being any different. I mean, my parents always thought it was weird that I liked horror films. We were from a real small town, and there weren’t even that many horror fans, let alone female horror fans.

I can’t say I personally do anything different from the guys. But I can say I love how much the community has come together just over the last like 5 years, to really support women in horror and make it a safe place for women — so that it does feel more welcoming to anyone. And I love the fervor that has been created on Facebook and a lot of different chat groups. Not even just elevating women film makers, but female horror fans as well. It’s ok for us to love horror. We make up 50% of the viewing audience, and our voices are just as important. 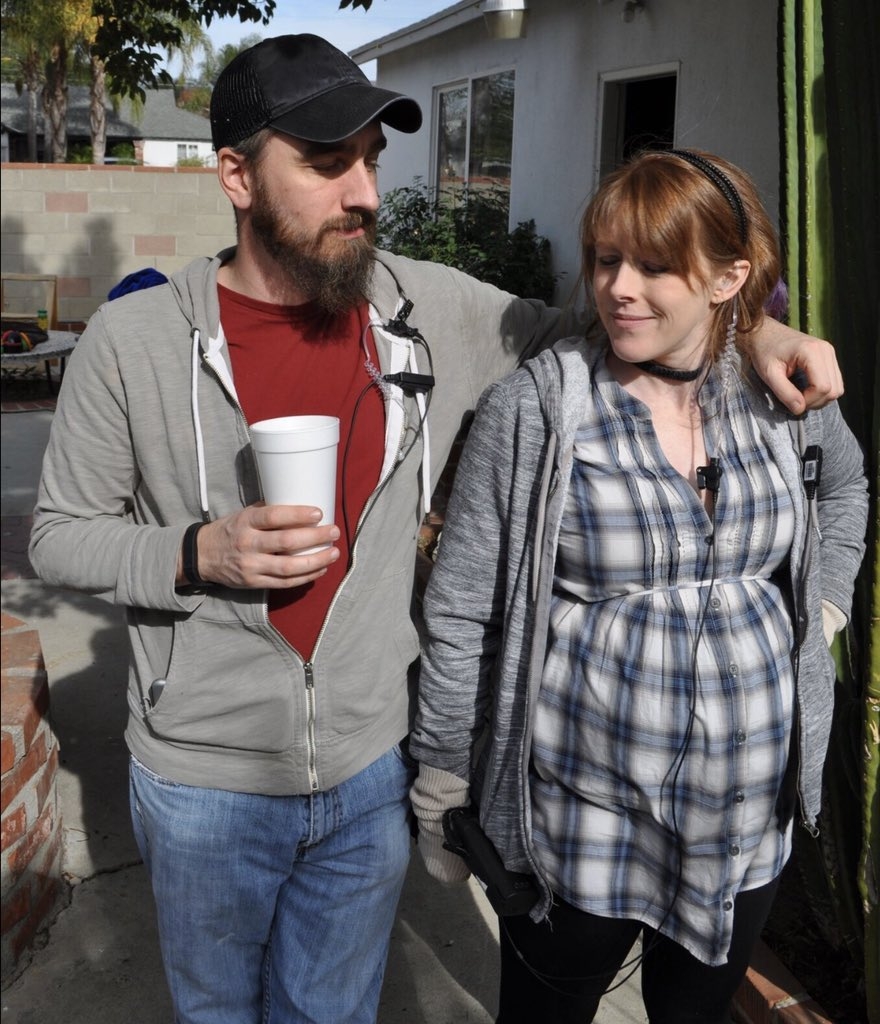 LAZG: What are the challenges of being a married couple, writing, directing and working together so closely on projects?

RM: The biggest thing I can say, is that we have to tell ourselves when to stop, because we do have kids. When you’re working on giant projects like this, you spend 8 hours a day generating story ideas and coming up with pitches. What do we want the character to do in act two, and should he be an orthodontist or a bird lover? You kind of go through all these different ideas throughout the day, and one of our biggest challenges is knowing when to turn it off.

Our kids are home, we’re at the dinner table, or we’re going shopping at Target, and we need to stop discussing the script. Plus, we do horror, so it’s always kind of like, can we say decapitation in front of the kids? What’s funny is that they are actually really used to it now, like they know Mom and Dad do that for a living, they get it. But we have to leave the work at work sometimes. 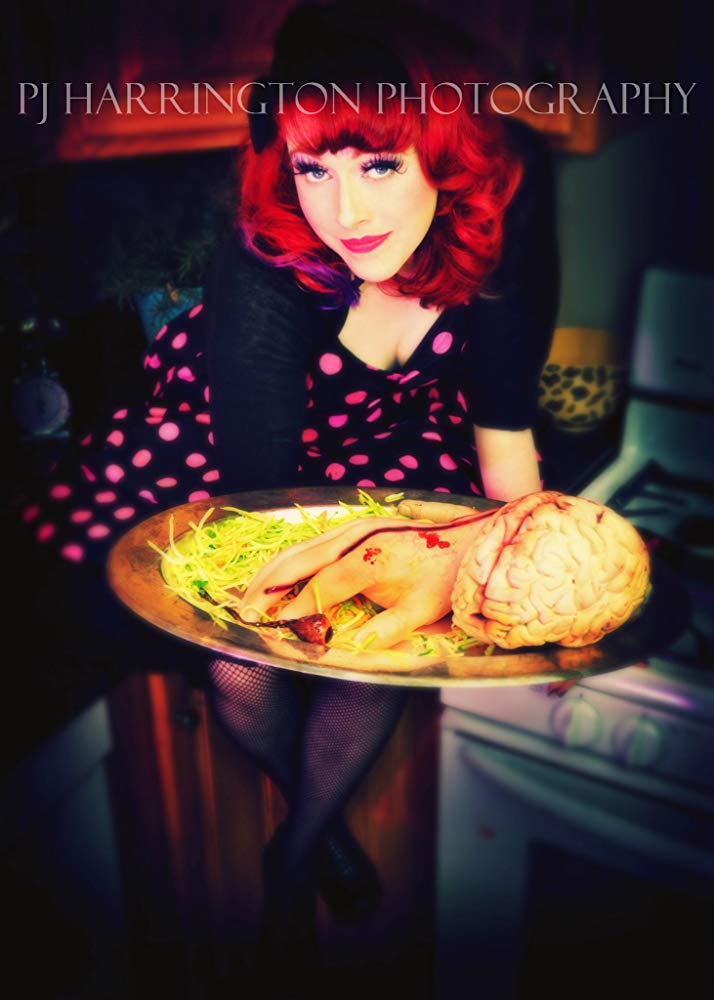 The kids do help though, and we’ll be like, “Hey, Marnie, if you had an elf, what would be an interesting way to get the elf to go away?” And we’ll come up with different scenarios. Sometimes they’ll hear us writing and say, “We want to help,” and that’s so great! We also catch ourselves pitching each other ideas everywhere. Like we’re making breakfast: “Hey, what if there was a werewolf and he did this or that?” We’re constantly throwing ideas at each other!

LAZG: Thank you Rebekah, for taking the time for such a fun interview!!! 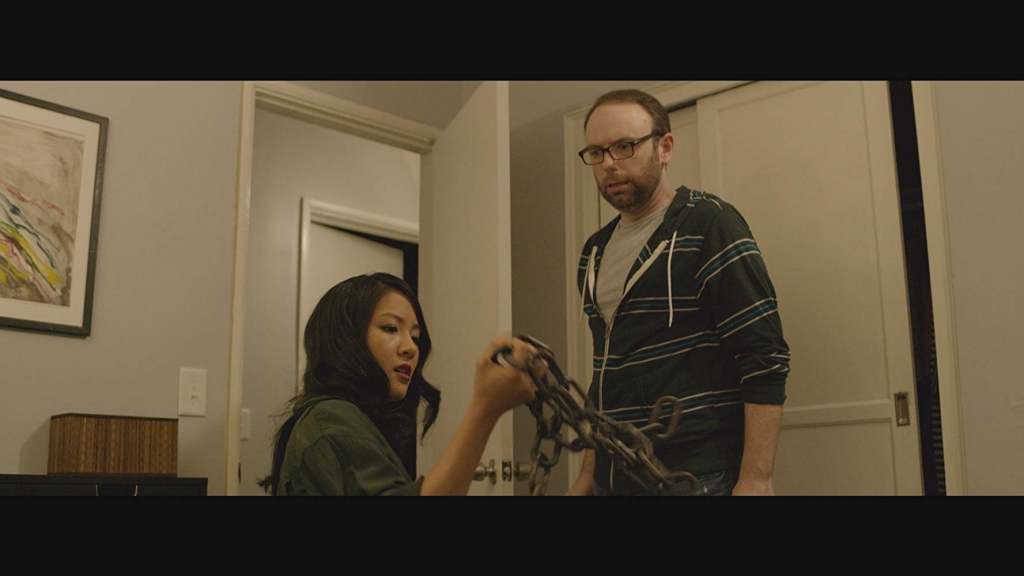 All the Creatures Were Stirring

All the Creatures Were Stirring was available on DVD, On Demand and Digital Video on December 4, 2018, from RLJE Films.  A must have for every horror fan’s Christmas collection!