Exclusive Interview with Jared Rivet, Plus a Jackals-Inspired Movie Marathon Recommendation From the Talented Screenwriter

Ever wanted to invade the twisted minds behind your favorite horrors? JACKALS screenwriter, Jared Rivet, answers some of our questions — and recommends a marathon of inspiring film picks!

If you haven’t heard of the movie JACKALS, do yourself a favor and watch the link below:

JACKALS is a nerve-jangling home invasion gem that takes full advantage of that 80’s satanic cult craze, where every child was brainwashed and every repressed memory held murderous sacrifices to the dark lords. It also happens to be one of the creepier home invasion movies that I’ve seen in years. At only 85 minutes, Jackals is like an adrenalin shot to the heart, tightly written, fast-paced and clever as hell. Wondering about the mind behind the world, I couldn’t help but grab the screenwriter Jared Rivet and ask him a couple of questions. 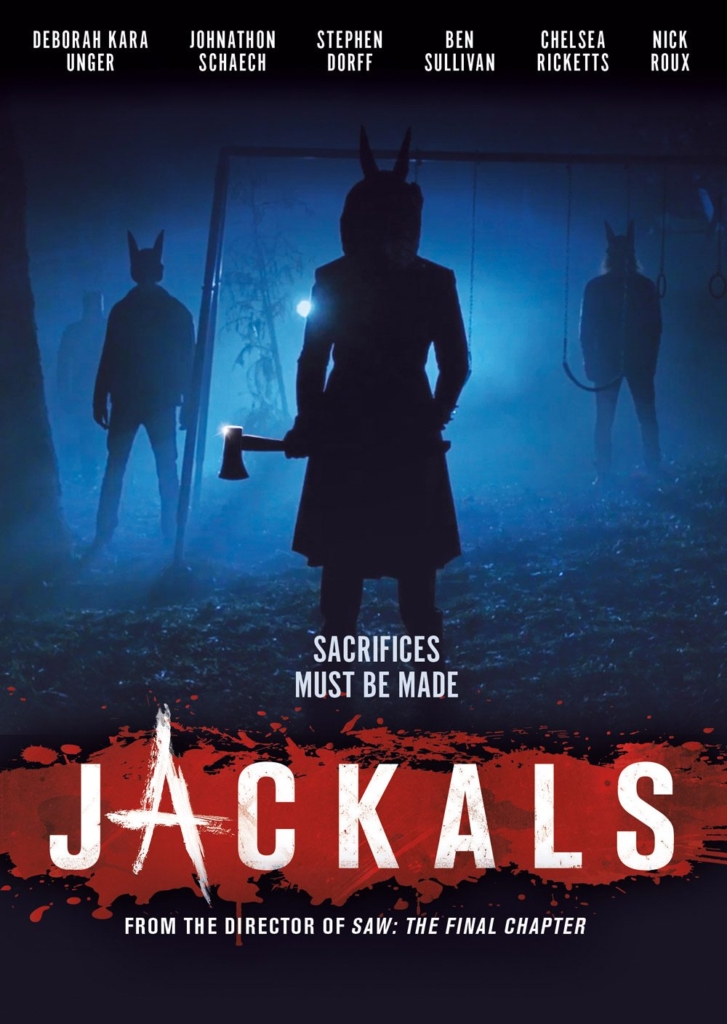 What was the first horror film (or filmmaker) that really had an affect on you?

The two horror filmmakers who made the biggest impact on me were John Carpenter and George Romero. I was terrified of horror movies when I was a little kid but I was inexplicably drawn to them at the same time. I remember cowering in the backseat with my hands over my ears at a drive-in screening of HALLOWEEN in either ’78 or ‘79. I was way too young for it and as an adult I have always wished that I could access whatever my mind’s eye was creating from Carpenter’s score and Jamie Lee Curtis’ screams. I’m guessing it would be absolutely terrifying.

And then I saw CREEPSHOW on VHS when I was 10 or 11 and that changed everything. The anthology format, the playful tone, the insane lighting and comic panel effects. It was scary, but it was fun – like the poster says, “The Most Fun You’ll Ever Have Being Scared.” After I saw CREEPSHOW I knew I wanted to make horror films. CREEPSHOW led me to NIGHT OF THE LIVING DEAD and Fangoria and that was it. I was hooked. Still am.

Why do you feel drawn to write horror movies?

That’s a toughie. I think I have an intellectual answer and a horror fan answer.

The intellectual answer is that as a genre, horror can be anything. If you’re making a horror movie, it can be a comedy. It can be a drama. It can be a period piece. It can be science fiction. It can show everything or it can be restrained. It can be about monsters or zombies or ghosts or pretty much anything if you can find a way to make it scary. Sometimes you can inject some satire or social commentary and sometimes you can just take people on a roller coaster ride.

The horror fan answer? I love the genre. I love the mood a horror film can create, the way music, lighting, and setting can be used to give you the creeps. I love when a movie puts me in that place. I guess I just love being scared and I get giddy when I get a good, scary idea that I wish I could go to a theater and see.

80’s slashers. They are my comfort food. And we are talking about everything from high profile stuff like HALLOWEEN and FRIDAY THE 13TH to stuff the normals haven’t even heard of, like MADMAN and HUMUNGOUS. There is something about the low budget slasher-bandwagon of the early 80’s generating dozens and dozens of “killer with a knife” movies that makes my dark, evil, little heart so happy.

And like I said, horror has so many colors and flavors that I might be in the mood for a possession flick or a ghost movie or a vampire movie, but at the end of the day, my heart belongs to what Peter Vincent in FRIGHT NIGHT would refer to (negatively, I might add) as the ones with “demented madmen running around in ski masks hacking up young virgins.”

I’ve only written one slasher screenplay. There was a prominent producer who expressed interest in it so I did a draft incorporating his notes…which were to remove all of the slasher movie elements. That was a bummer. And then the movie never got made.

JACKALS has some definite slasher elements but it’s more of a siege movie mashed up with a killer cult movie. The difference between a slasher movie and a siege movie is character awareness. Slasher movies are all about trying to prolong the group from finding out they’re being picked off one-by-one as long as possible. If they’re aware of the danger and board themselves up someplace, that’s a siege movie.

What do you think is the future of horror movies? What’s the next big thing?

That and I don’t think I’m Nostradamus for saying that I think the traditional horror-anthology is coming back. I think we’re going to be seeing more horror-anthology features and TV series real soon. And I don’t mean the modern definition of “anthology series” (i.e. AMERICAN HORROR STORY or TRUE DETECTIVE), I’m talking about TALES FROM THE CRYPT and NIGHT GALLERY-type stuff.

The entire time I’ve been struggling to get things made in Hollywood, I’ve been told repeatedly that no one would make multi-story anthologies anymore but I feel like the tide is turning, with things like TALES OF HALLOWEEN being so well received. I keep writing and directing episodes of the Earbud Theater podcast (www.earbudtheater.com) which is totally an anthology and that gives me a bit of an outlet for that, but I would kill to get a CREEPSHOW-style feature made.

JACKALS, written by Jared Rivet, will be in theaters and On Demand September 1. I also asked Jared  to create a J