MONSTER-MANIA CON is the HORROR FILM CONVENTION that was created By the Fans, FOR the fans! 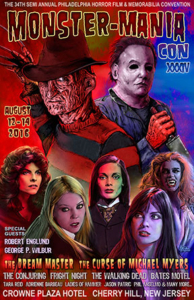 On August 12-14, the Crowne Plaza Hotel in Cherry Hill, New Jersey was overrun with ghouls, goblins, and other things that go bump in the night. That can only mean one thing, the semi annual MONSTER-MANIA CONVENTION was back in full force with its 34th show.

Fans crowded the convention with hopes of meeting some of their horror/pop culture heroes and heroines. And they were not disappointed with a stacked lineup that included: Amanda Bearse & Stephen Geoffreys from Fright Night, Don Gibb and Curtis Armstrong from Revenge of the Nerds, Nestor Carbonell and Max Thieriot from the hit A&E TV show “Bates Motel”. Tuesday Knight, Danny Hassell, Andras Jones and Lisa Wilcox from A Nightmare on Elm Street 4: The Dream Master were also on hand for a cast reunion, along with the star of the franchise, Freddy Krueger himself, the legendary Robert Englund. 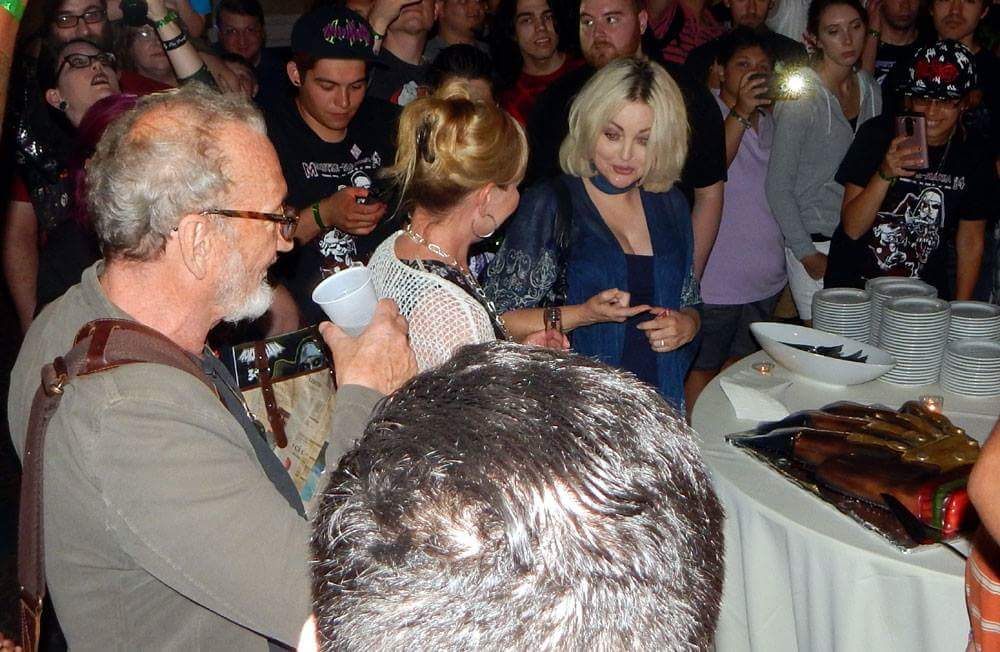 Making their 1st ever con appearances were Bonnie Aarons (Valek, the evil nun from The Conjuring 2) and Jason Patric (Michael from The Lost Boys). Genre fans also had the chance to meet and mingle with several guests from AMC’s “The Walking Dead”, two-time WWE Hall-of-Famer and 16-time Champion “The Nature Boy” Ric Flair, legendary scream queen and John Carpenter alumni Adrienne Barbeau, Tom Atkins, and Charles Cyphers in his final convention appearance.

In addition to The Dream Master reunion, cast members of another beloved horror franchise gathered for the Halloween 6 reunion. Friday the 13th fans were able to meet two of the men who donned the iconic hockey mask, Steve “The REAL Jason” Dash and CJ Graham. There was truly something for everyone at this show. 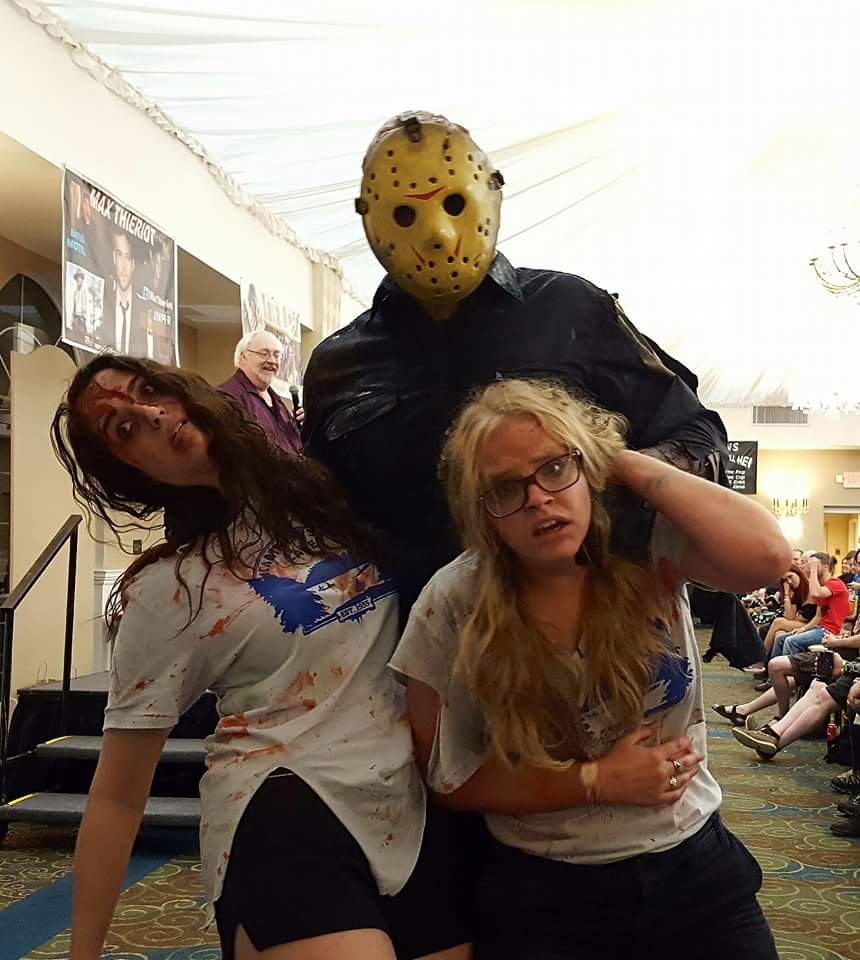 Before I get into specifics, I have to give props to the unsung heroes of any horror convention, the vendors! These are the people that truly put their blood, sweat & tears into making sure the fans leave the show with a good memory (in case they had a bad experience with a celebrity). The vendors get the most grief from everyone, and they still put a smile on their face to make sure everyone is 100% satisfied with their purchase. Vendors from Ian’s Pumpkin Carvings to Little Punk People to Fright Rags to London 1888 and so many more…these are the true stars of any convention. 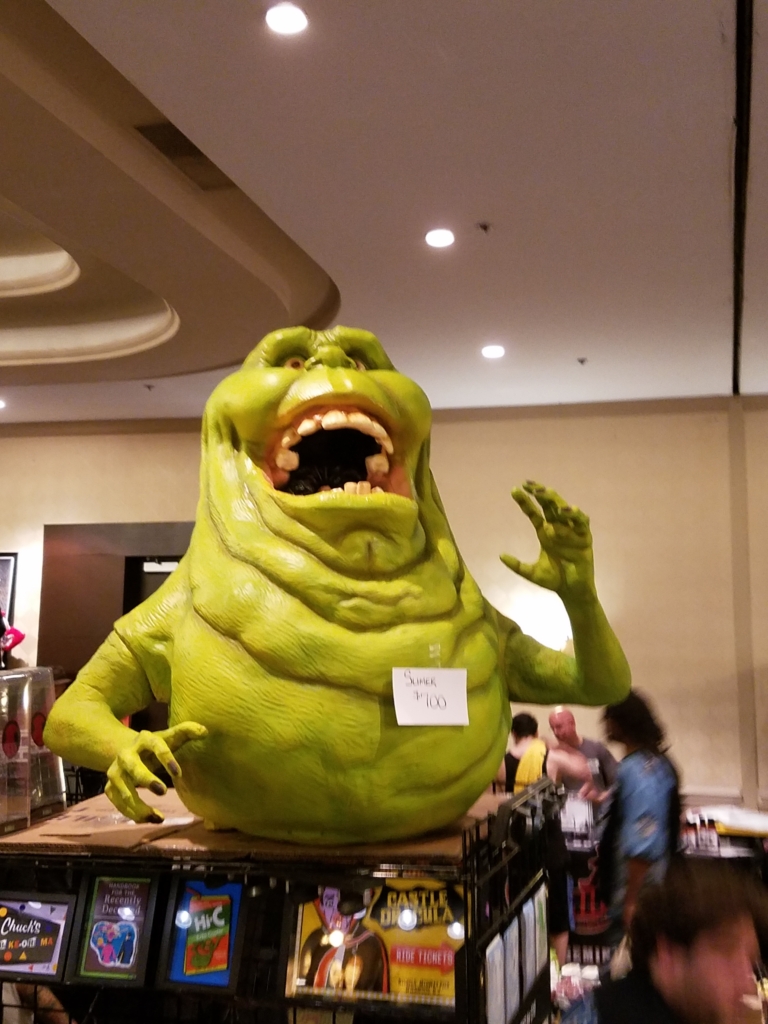 No big surprise, Robert Englund had the longest lines and wait times of any guest at the con. Attendees who purchased VIP wristbands still had a 3-4 hour wait before meeting Mr. Englund. I’ve met him in the past, and I can tell you he is worth the wait. While most fans were busy waiting all day for chance to meet Mr. Englund, others (like myself) took advantage and got all my autographs the first night. The lines for the other celebrity guests were not bad at all. I really wish I could tell you that Jason Patric was awesome to meet, but I’d be lying. Maybe it was nerves from finally showing up to his first con or the fact that he might not have wanted to be there, but he was extremely short with everyone and didn’t even bother to smile in pictures. Plus he was barely at table and threw some shade at Corey Haim during his Q&A panel. I’ll be shocked if he appears at another con, as it seemed like he didn’t want to be there at all. Ric Flair was also a guest that was really short with people and had a lot of con attendees complaining about price and attitude.

For once The Walking Dead guests were not only reasonably priced but super friendly (except for one who is no longer on the show) and were a joy to meet. Everything you’ve ever heard about Tom Atkins, Adrienne Barbeau, and Charles Cyphers is true! They are the nicest people in the world and were beyond friendly with the fans. This was Charles Cyphers final con appearance and he went out with a bang. Fans showered him with love and respect as they didn’t want him to retire from doing conventions. 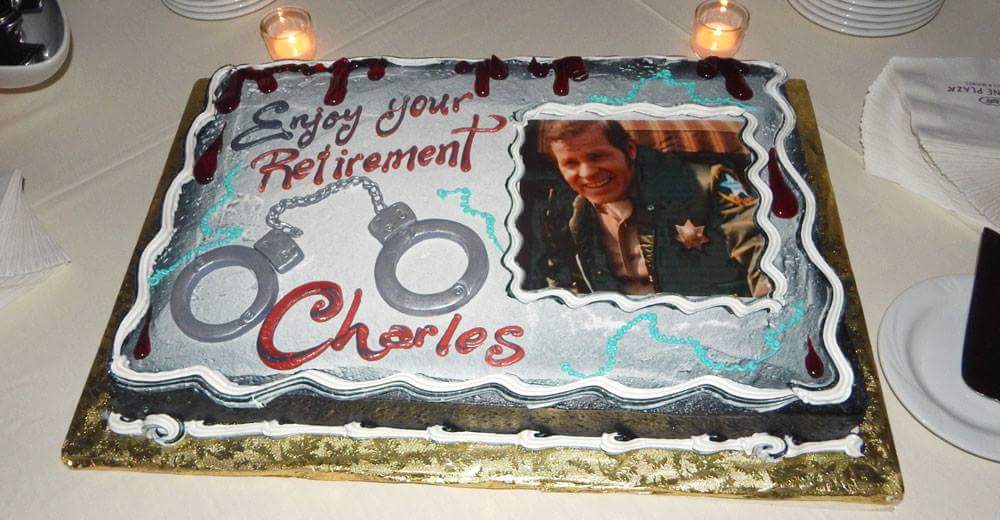 Adrienne Barbeau is a timeless beauty who has not aged at all. She was so friendly with all fans and she never turned down a picture in the lobby or bar/restaurant area well after she was signing. Tom Atkins is the man plain and simple! He’s a ladykiller, and every guy wants to be him. He is as cool as the other side of the pillow, and I highly recommend meeting him at a convention if you ever get the chance. Steve Dash and CJ Graham were on hand to represent Mrs. Voorhees’ special boy. These guys are total pros and love to meet the fans and discuss all things from growing up in the Bronx to discussing how they were chosen to embody Jason. Curtis Armstrong and Don Gibb were awesome! These guys had a blast meeting fans and talking about Revenge of the Nerds, while Curtis was also discussing “American Dad”, “Better Off Dead” and “Supernatural” with fans. 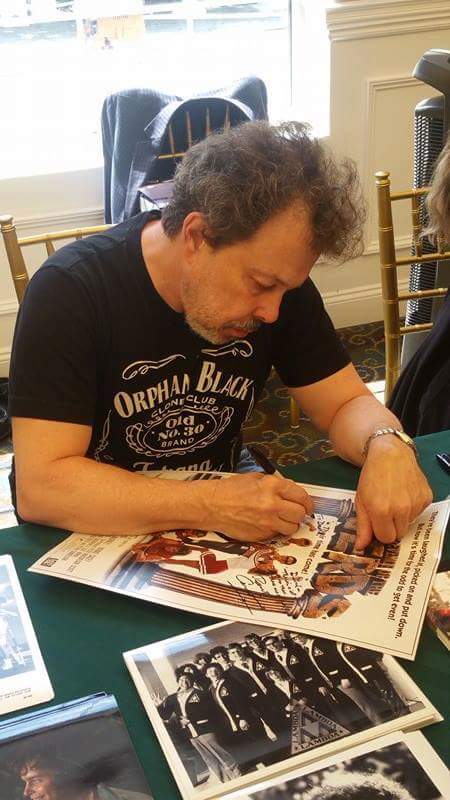 Amanda Bearse is such a sweet lady that I would meet her anytime she is at any show. She takes her time and loves to talk about anything and everything with people. The Halloween 6 reunion was cool, but the highlight was catching up with my old buddy Ken Smith.

The main highlight of the show was catching up with my Dream Master friends. It’s been 2 years since I saw them last, and we didn’t skip a beat. For those not in the know, I hosted a con 2 years with the entire Dream Master cast (sans Robert Englund) as the main guests. We became friends and stayed in touch since then. So when I saw that some of them would be at this show, I knew it would be special. Was I ever right. From grabbing drinks in the bar to having lunch and dinner , we picked up where we left off 2 years ago…having a good time. The love and admiration I have for Andras Jones, Danny Hassel, Lisa Wilcox and Tuesday Knight is off the charts, and any show they attend I will be there. 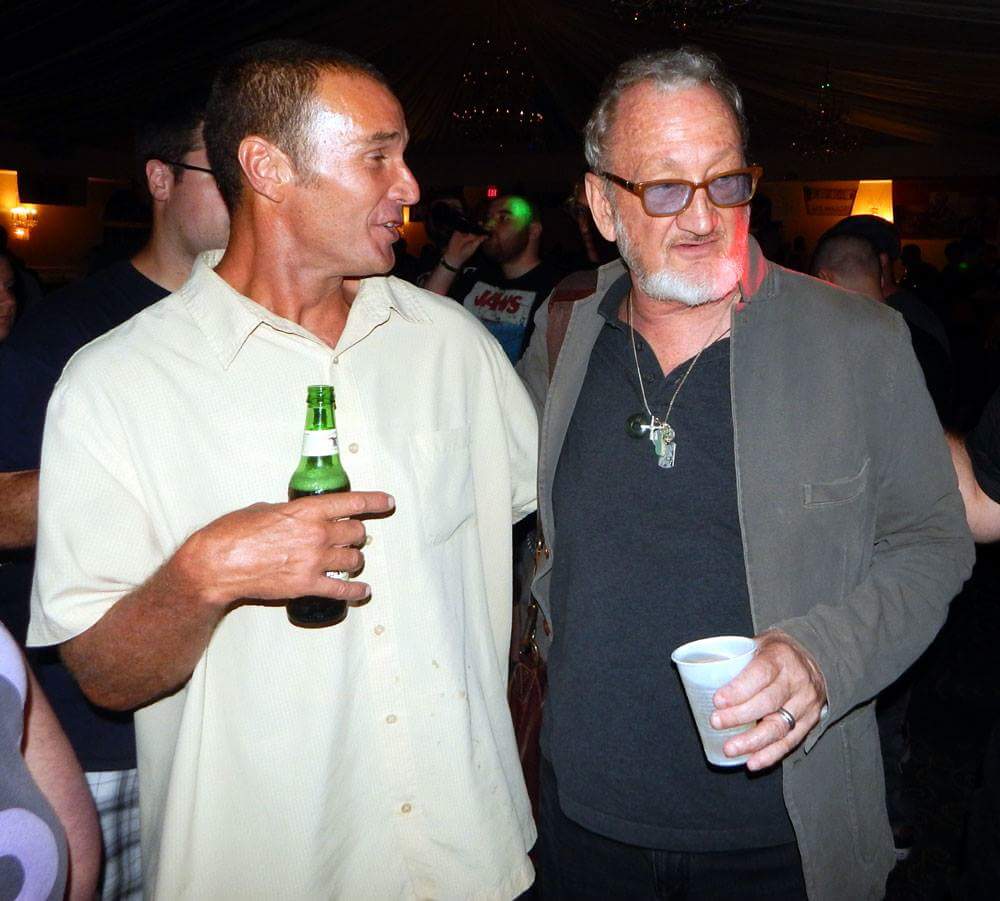 The cosplay was on point as always and the costume contest did not disappoint. Truly a hodgepodge of everything and anything was on display during the weekend. From the slashers to sexy to truly original, cosplay was ruling the floor at Monster-Mania. The cosplayers were getting pics with fans just as much as the celebs. The one cosplay that had everyone buzzing was the gentleman who dressed up as Joe Dirt, complete with giant crap rock in the wagon. Another cosplay that had people stopping for pictures, was the boy who dressed up as Eleven from the cult show “Stranger Things”. 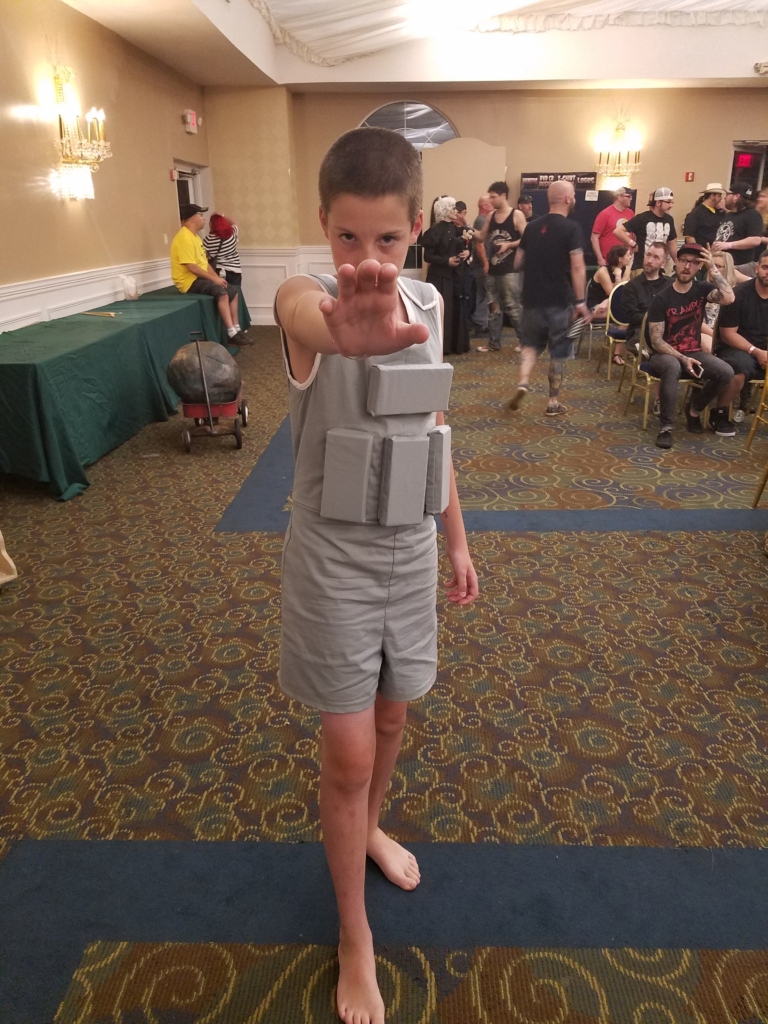 Q&A panels were packed with fans hungry to devour any information about their favorite films, actors and directors. The Dream Master Q&A was packed to the rafters with fans eager to hear the cast and of course Robert Englund discuss all things Freddy and beyond. Films are also shown at the con with a special Saturday midnight screening of The Rocky Horror Picture Show presented by TNP-Transylvania Nipple Productions-Philly’s Own Rocky Horror Shadowcast, with full audience participation. TNP puts on one helluva of a show. This time out the pre-show included Erica N. Furter and two other TNP members doing a shadow cast of “I Still Believe” by Tim Cappello from The Lost Boys and a tribute to the late musical genius Prince, with TNP leader Nick N. Furter doing a killer dance number to The Purple One’s hit Kiss. Once again, another home run for TNP. 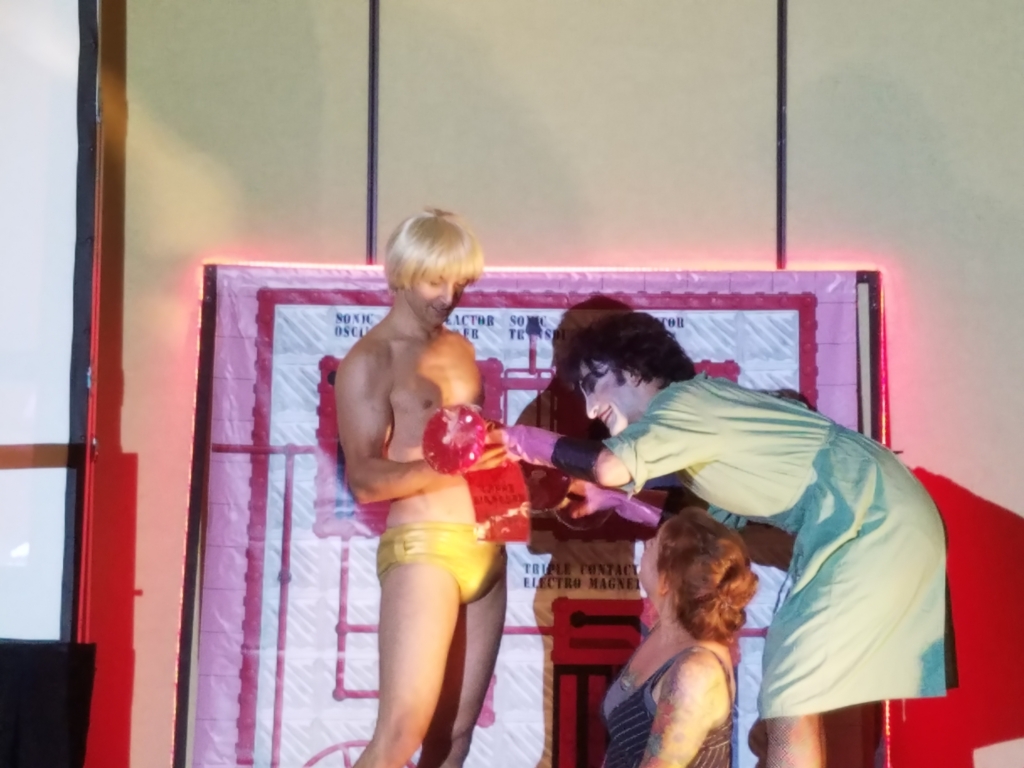 Overall it was a great weekend, that was almost hindered by the lack of air conditioning in the lobby and convention rooms. It was great catching up with friends, shopping the vendors area and meeting celebrity guests. It’s a good way to meet new people and all come together for the love of the genre.