Monster-Mania prepares to kick off the 2018 con season with a line up that easily makes it one of the must attend horror events of the year.

Convention season is rapidly approaching, and the amount of shows that horror fans can attend is at a staggering number. 2018 promises to be a banner year for horror cons. In case you missed it, be sure to check out our Horror Convention Survival Guide…then get ready to make the most of this year’s packed schedule.

The first con you’ll want to try to attend if at all possible is Monster-Mania’s March show (MMCON 39). This hugely popular con seems to be pulling out all the stops to make sure they start the year off with a bang!

Monster-Mania has announced arguably their biggest lineup of stars to date. Their closest show to this one would be the August 2013 show that had Christopher Lloyd, Gary Busey, Danny Glover and the late, great George A Romero. However, even that incredible event wasn’t as stacked as this show’s lineup.

March 9-11 in Cherry Hill, NJ is definitely the place to kick off the start of con season. (Look for ticket information at the end of this post.)

For starters, how about a 30th anniversary KILLER KLOWNS FROM OUTER SPACE Reunion featuring stars Grant Cramer and Suzanne Snyder, along with Klown performers Mike Martinez and Harrod Blank. But wait…there’s more! Just announced are writers/directors/producers behind the 80’s cult classic The Chiodo Brothers. They will also be on hand to celebrate 30 years of Klown Kraziness.

Speaking of clowns, if you need some help to defeat an evil shape shifting clown that feeds on your fear…The Loser’s Club will be in the house. The young stars of last year’s monster smash IT:CHAPTER ONE, Sophia Lillis (Beverly), Chosen Jacobs (Mike), Wyatt Oleff (Stan), Jeremy Ray Taylor (Ben) and Jaden Leiberher (Bill) will all be in person meeting fans at the event. 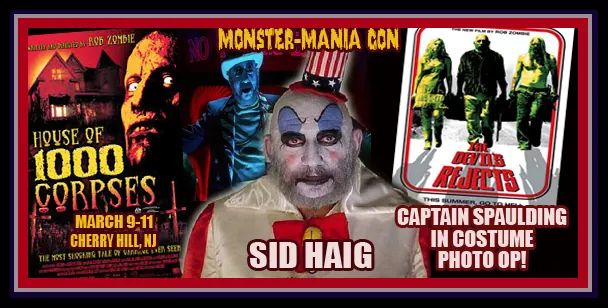 Looks like there will be more official Clown Business that supersedes anything else you had planned for the day as Captain Spaulding himself, Sid Haig, will be appearing during Monster-Mania weekend. As if that weren’t enough, he will be donning his iconic Captain Spaulding makeup and costume from THE DEVIL’S REJECTS for a special in-costume photo op for fans.

Whatever you do, don’t look in a mirror and say his name 5 times…oh too late. The iconic Tony Todd will be a guest at the show and like Sid Haig, will also be doing a special in-costume photo op as CANDYMAN. Sweets to the sweets indeed.

You say you want a hockey masked killer with severe mommy issues? FRIDAY THE 13TH fans rejoice as not 1, not 2, not 3, not even 4, but 6 (count them 6) actors who have embodied the iconic Jason Voorhees on screen will be in attendence during the weekend. They will all be doing in-costume photo ops for fans as Steve Dash, Ted White, Tom Morga, CJ Graham, Ken Kirzinger, and the incomparable Kane Hodder will get back into their familiar Crystal Lake gear.

Sharni Vinson from the excellent YOU’RE NEXT is returning to Cherry Hill to hang out with fans. I haven’t personally met her yet, but I’ve heard she is extremely friendly and beyond nice to everyone. 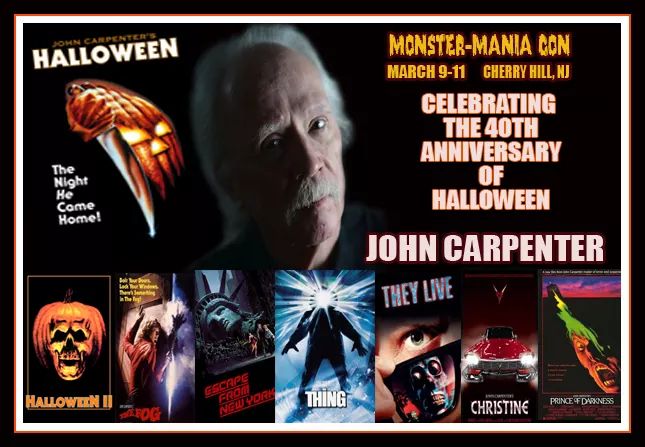 This year marks the 40th anniversary of the iconic horror classic HALLOWEEN and Monster-Mania has the perfect way to celebrate the event. John Carpenter himself is making a rare appearance in March to commemorate 40 years of The Shape, as well as his other films THEY LIVE, ESCAPE FROM NEW YORK, STARMAN, BIG TROUBLE IN LITTLE CHINA and (my personal favorite Carpenter film) THE THING. Filming has begun on the new entry in the HALLOWEEN series, where John is serving as both executive producer and composer of the film’s score.

That wraps up the celebrity guests who are returning to Monster-Mania, but what about the ones who are making their first appearance at the show or even their first convention appearance anywhere?

Joe Pantoliano (aka Joey Pants) is making his 1st MMC appearance. Joe’s body of work is extensive from THE GOONIES, TALES FROM THE CRYPT, BAD BOYS 1&2, THE MATRIX, RUNNING SCARED, and THE SOPRANOS (one of my all time favorite T.V. shows).

Everyone’s favorite Hobbit will be there for his 1st Monster-Mania, as Sean Astin will be on hand as well. Sean also an impressive resume that includes THE GOONIES, ENCINO MAN, TOY SOLIDERS and his Oscar nominated performance as Samwise Gamgee in Peter Jackson’s epic LORD OF THE RINGS trilogy. Fans of STRANGER THINGS will be excited to meet the man behind fan favorite Bob on the hit Netflix show.

Pussy Willows Dottie. SERIAL MOM herself, Kathleen Turner will be making her Monster-Mania debut this March. The woman who gave voice to the iconic Jessica Rabbit in WHO FRAMED ROGER RABBIT? as well as starred in ROMANCING THE STONE and its sequel JEWEL OF THE NILE will have plenty of people at her table.

Not one but 2 guests will be making their convention debuts in March.

First up, one of the founding members of The Brat Pack, Ally Sheedy will be on hand to meet and greet with fans. THE BREAKFAST CLUB is one of the best 80s movies ever made and one of the most influential films of all time. This is a rare opportunity to meet one of the stars from the best film about high school.