Sussex Horrors is an impressive anthology of foggy beaches, windswept piers, eerie lighthouses, and coastal terror at its finest.

Sussex Horrors is a unique anthology featuring only three authors and stories that keep their settings limited to the historic coastal town of Sussex in England. This framework provides ample room for the writers — Jonathan Broughton, Mark Cassell, and Rayne Hall — to have loads of ghastly fun.

While a few of the tales within Sussex Horrors are so brief that it remains difficult for the reader to fully engage, most of the stories are rife with action, spookiness, bloodshed, and seaside terror.

Rayne Hall opens the anthology with a tale of bloodthirsty seagulls in the aptly-titled “Seagulls.” Readers might recall that in his seminal film The Birds, Alfred Hitchcock never fully reveals the reason why the birds are attacking and why they have singled out his female protagonist. Hall opts for similar ambiguity in “Seagulls,” which amplifies the suspense and fear for poor protagonist Josie. And much like Daphne du Maurier’s short story “The Birds,” Hall’s tale concludes with the suggestion that these winged attacks are merely the beginning to some greater form of horror.

“The Stealth of Spiders,” by Jonathan Broughton, comes next in the anthology, a gripping story of a disabled woman named Abigail who ventures into her deceased sister’s flat to retrieve a particular item…only to be met with a nightmare world beyond her worst imagining. Broughton has a keen eye for ghastly detail, made all the more stomach-churning by the helplessness that Abigail feels as the story reaches its shocker of an ending.

Mark Cassell’s “The Rebirth” rounds out the first three stories in Sussex Horrors, and it may very well be the most epic and strangest story of the bunch. In this tale, a fisherman’s egg gives rise to something monstrous and deadly, and the author pulls no punches when it comes to those who will suffer as a result (for example, in an early classroom scene, young children fall victim to an unearthly violence that spares no prisoners).

Cassell weaves together the horror and fantasy elements well here, and “The Rebirth” makes for one of the most entertaining stories in the collection.

As mentioned, not every story clicks: Broughton’s “You Have One Message” is an all-too-brief (and familiar) cautionary tale about technology gone wrong, while Hall’s “Normal, Considering the Weather” struggles to use the epistolary form to generate suspense, dread, or character development.

As Sussex Horrors nears its middle portion of tales, Cassell stuns again with “Demon Alcohol,” a fast-paced tale of a creature attempting to destroy a young couple — a creature who thrives off of human flesh and uses it to increase its strength and power. The imagery is all sorts of gooey, sticky, and bloody, making for a rollercoaster-ride of a story.

In the quick “Double Rainbows,” Hall takes advantage of the coastal environment with the setting of a lighthouse and a menacing tide. Protagonist Gerard believes it might just be possible to love two women at the same time despite the complications such a choice might cause…but his philandering ways might be no match for the unforgiving ocean and another character who sets a diabolical plan in motion. 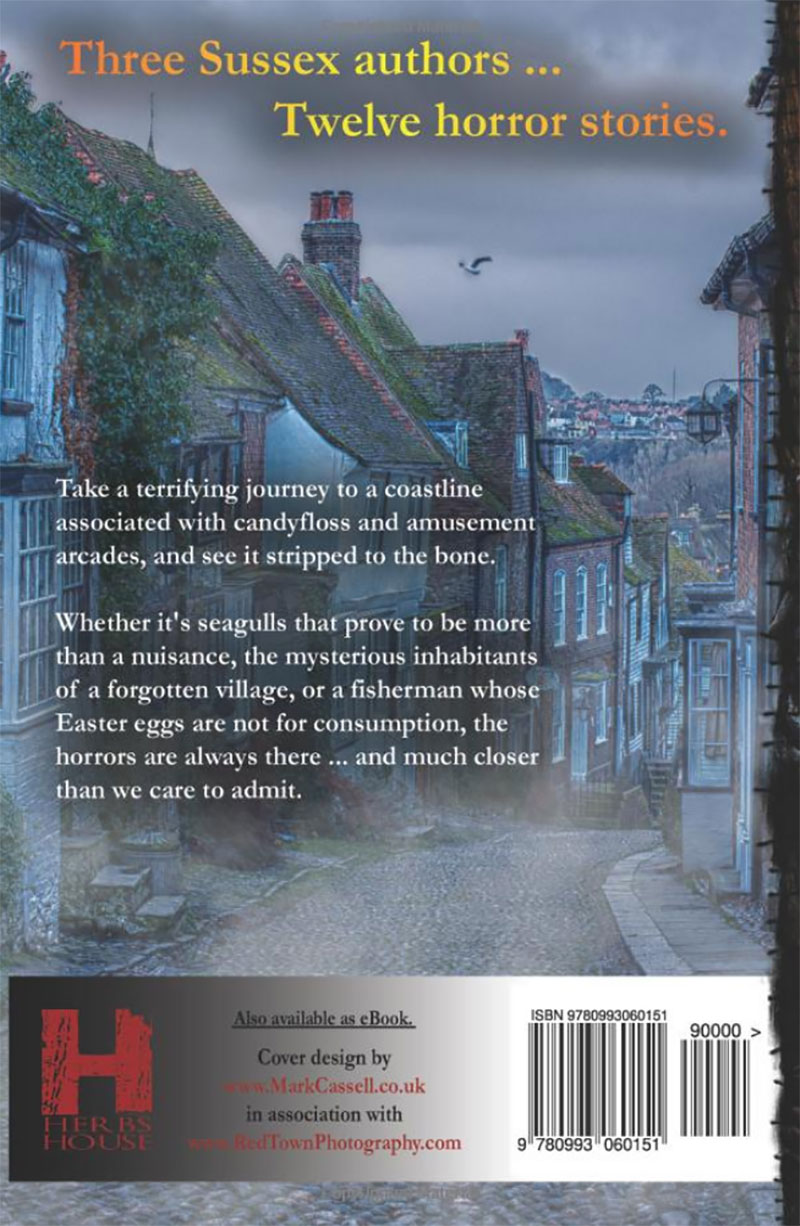 Overall, Sussex Horrors is a worthy anthology; the three authors know their stuff, and they fully realize the setting in order to take advantage of all that it has to offer in the realm of suspense and horror.

The collection was published in early 2018 by Herbs House, and is available at all online retailers.