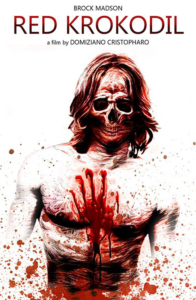 “Looking out my window used to be unremarkable.  Taking a curious peek at the outside world and its myriad of banalities was something I did out of habit.  That is no longer the case.  I don’t see a city anymore.  The buildings are nothing but steel skeletons, and the air is fire. Now I see clouds weep poisoned sunlight when I look out the window.  Everything has ended.  Humanity put a pillow over Earth’s mouth and pushed until the struggling stopped.

I was surprised when I realized the only two true sources of hope are companionship and death.  Since companionship was no longer an option, I chose death.  Life abandoned itself, so I abandoned myself.  I won’t miss anybody.  Like a child swallowing bubblegum I’ll choke on the damp scabs of my blissful destruction.  The tried-and-true method of “quick and painless” is a copout.  I made no mark whatsoever on society, so I have one last chance to make a mark on myself.  Several marks, inside and out.  By choice I decided to die by the needle.  It’s a decision made of rage, surrender, and self-disgust. 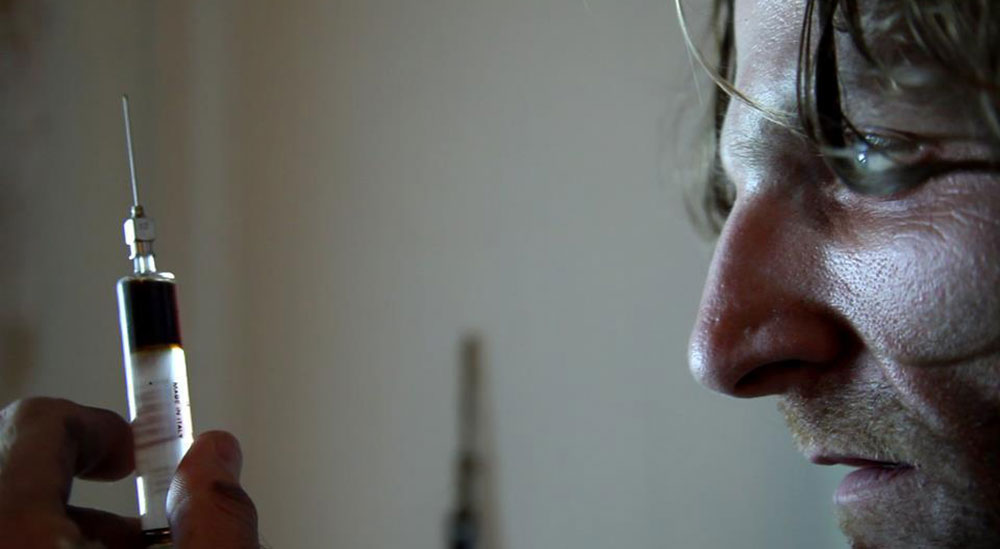 Here I fall to pieces, eroded from within by the crimson red thumbtacks I inject into my system.  There are moments when I feel ok, then suddenly I’m coating an already dirty toilet with battery acid diarrhea.  I can feel dry crevices in my stomach fill with fluid and overflow, but the vomit tastes so good that I swallow it back down.  There’s another hit on the way, so I don’t mind.  Oh my cuddly, pretty little spike, you’re the only one I have ever allowed inside me.  Come inside really slow.  The rusty sliver disappears as it crawls into my skin.  My slimy lungs push infected air bubbles into the injector, and the hole whistles like a little flute.  What am I going to do when I run out of gauze?

If I was strong enough I would crush this piece of shit radio and the pieces of shit it spits out at me.  It makes sense that my mind is the best entertainment.  It’s been so long since I cut loose from my anchor, and drifting feels so good.  Where did all the smiles go?  Wherever the green grass went, and none of it will be missed. 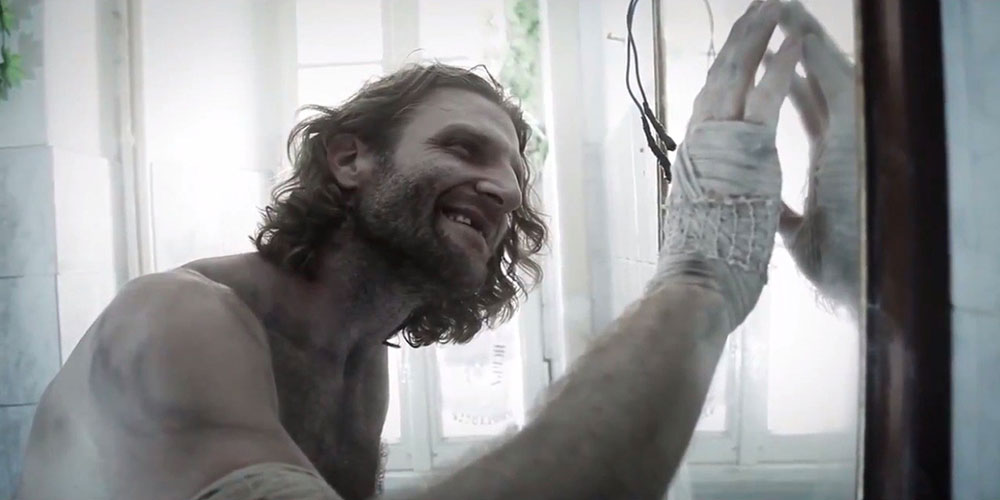 The needle is deconstructing me like a surgical instrument. I’m just a tangle of hoses spewing rubbing alcohol.  I’m pregnant with something that chews its way out through my veins.  Day infects day as the grotesque shocks inside me try to make sense of what I’m doing.  But there is no sense.  Only the death that comes closer with every hit.  And my beer battered heart fries without burning. Will stop soon?  Someday?  Please?”

Red Krokodil, to me, is not an endurance test, or an assault of shocking attacks of gore. 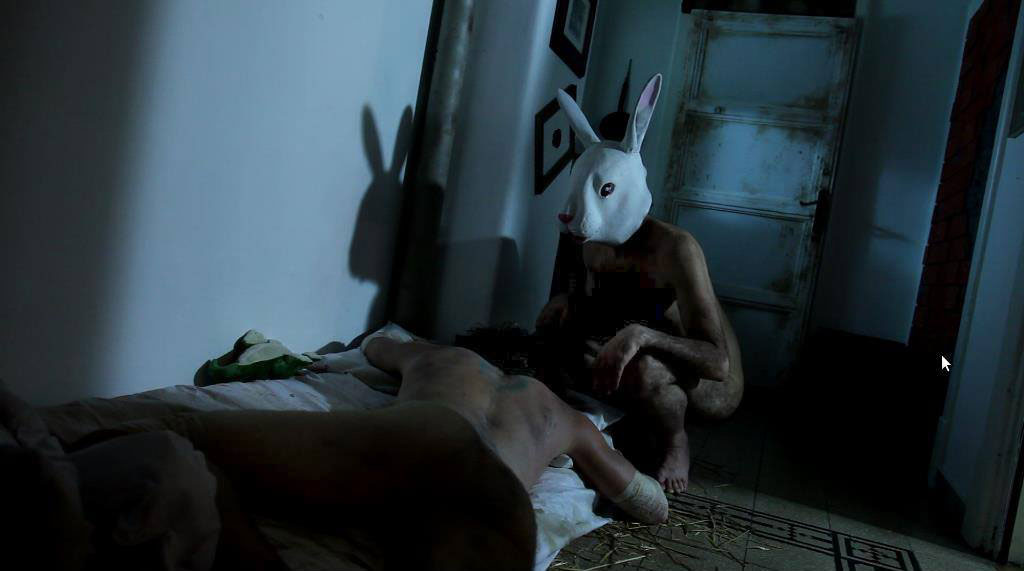 It doesn’t ask me how much I could take, it forces me to watch a man surrender to the limit of what he could take.  And then it shows me what would happen if he took even more after that.  The thing that moved me so much about this film is the satisfaction the man gets from his decision to die.

The plot synopsis alone is devastating: a man observes a destroyed world from his kitchen window, and decides to take the hard drug Red Krokodil until it kills him.  The trip he takes along the way is what the movie is about. 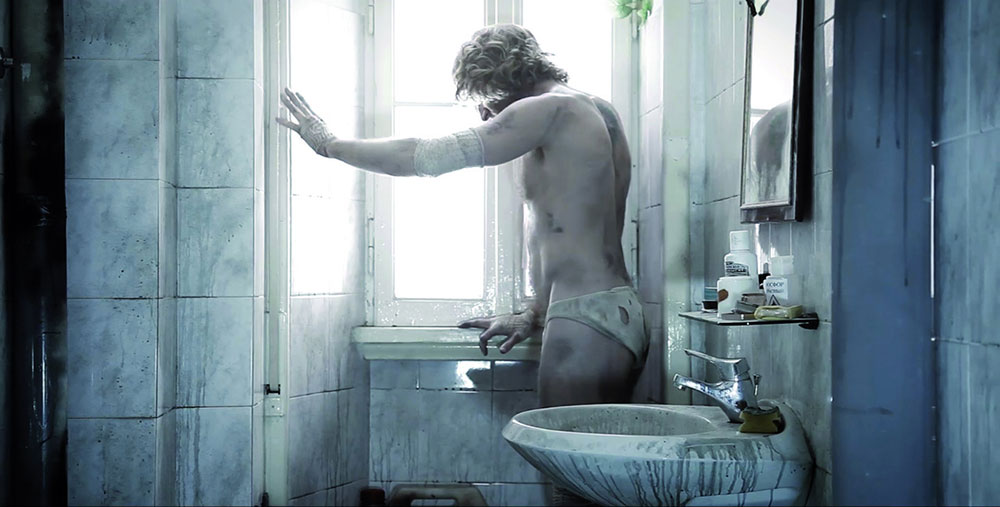 There are moments of happy dreams and sexually rancid nightmares, but the only reality we can clearly recognize are the moments when he is high and dying.  The most exceptional thing about this movie is the dialogue.  Occasionally he talks to himself (or us?), and the things he says are devastating.  I was moved to tears by his words.

This movie was so passionately written.  I love it when I can feel and hear the filmmaker’s voice within the movie.  Although it is a mostly silent movie, the stream of words addict swims in are almost as wet and moldy as the ever-growing wounds on his body.

Red Krokodil is a beautiful and meditative film, and another black diamond in the Unearthed Films crown.