With the spooky season now upon us, we present an assortment of horrors to thrill and terrify you as you settle into your favorite reading nook.

Halloween is around the corner, and the world as we know it is on a roller coaster ride to a possible Armageddon. So, why not pick up a great book (or two or three great books), open the pages, and lose yourself in another world. Once you’ve settled into your comfiest chair, take a moment to let the outside hellscape be forgotten as you search for new monsters and horrors in which to enjoy this spooktacular month of October. What follows are a few of our topic recommendations to help you discover great new reading material — old and new. We hope you enjoy!

1. The Terror and The Thing in the Woods 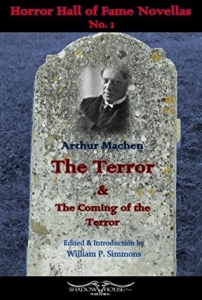 Coming by way of Shadow House Publishing are the first two installments of a new series set on shedding light on classic horror gems that are often overlooked and underappreciated: Horror Hall of Fame Novellas.

The Terror: A Mystery by Arthur Machen — which also includes the original short story, The Coming of the Terror — is a fantastic study of atmosphere and tension building with some very inspired moments as the mystery gradually unwinds its way to a conclusion. It is largely set in Wales and concerns mysterious and unexplainable deaths which appear to be unrelated. The greatest element of The Terror is the inclusion of the original short story and how Machen goes about expanding it into the full novel, which is presented at the start.

Arthur Machen (1863 – 1947) was a Welsh author and mystic of the 1890s and early 20th century. He is best known for his influential supernatural, fantasy and horror fiction. His novella The Great God Pan has garnered a reputation as a classic of horror (Stephen King has called it “Maybe the best [horror story] in the English language”). He is also well known for his leading role in creating the legend of the Angels of Mons. 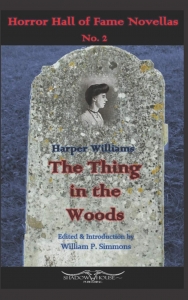 The Thing in the Woods was written by the author of The Velveteen Rabbit under a pseudonym, Harper Williams. It is a powerful story of sin, science, and the supernatural set in rural America. This terrifying novel is equal parts pulp thriller, mystery, and supernatural sensation, serving as the focus of Volume 2 of Shadow House Publishing’s series. An early take on the classic werewolf tale, it is an absolute joy to read. This novella was also said to have inspired H.P. Lovecraft’s The Dunwich Horror.

The writing in The Thing in the Woods takes hold of emotions and brutality with such elegance, I was enthralled. As with The Terror, editor William P. Simmons includes delightful extras such as an essay titled “Folk-lore Relating to Were-wolves” and an extra short story, “A Werewolf’s Revenge”.

You can get the Kindle or paperback edition of The Terror here. The Thing in the Woods is also available for purchase in Kindle, hardcover, and paperback formats. 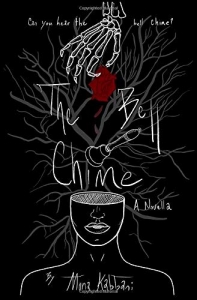 A girl suffering from paralyzing night terrors finds a missing poster hanging from the door of her apartment building. On that poster is a photograph of a frighteningly familiar face.

A more current pick is Mona Kabbani’s debut novella, The Bell Chime. One of the writers for the stories featured in the Unbearable Scares podcast, Kabbani jumps into her first official book with no hesitation.

A mind-fuck of a novella that manages to set classic story notes on its head, Kabbani creates a mystery that is equal parts horrifying and intriguing. A psychological mess with its foot wading deep into the horror pool, the book beautifully encapsulates the horrors going on in the characters’ minds while keeping the reader on their toes.

Mona Kabbani is a horror fan, writer, and reviewer obsessed with psychology and the human condition. She emulates the conflict of the good versus the bad and all of the in between in her work while providing an entertainingly horrifying experience. She is a Lebanese immigrant living the American dream in New York City where much of her writing is inspired. Learn more about her and follow her work at www.moralityinhorror.com.

The Bell Chime is available for free with Kindle Unlimited, or you can pick it up in paperback format. 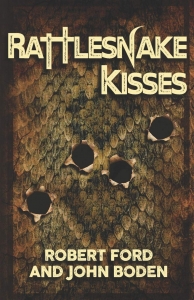 Dallas is a man seasoned by both time and circumstances.The Kid is his protégé. After being hired for a seemingly easy job, Dallas and the Kid find themselves on a wild ride. Every stop they make introduces lies, violence and memories best left buried.

Taking a full left turn into something horror-adjacent is Rattlesnake Kisses by Robert Ford and John Boden, which was published on July 9, 2019. An action romp that revels in the gory details, this book carves a niche in a sub-genre I would like to dub “Southern Fuckery”.

Rattlesnake Kisses relishes in the insanity that the story drives through on the back of a pick-up truck, full speed, on a road littered with potholes. Ford and Boden do well to give their reader main characters who are easy to latch onto. While taking pleasure in the darkness of humanity, it splashes the pages with inventive vulgarities and insane moments of gore yet remains funny and raw with a sense of wisdom and care that truck along to the finish line.

Rattlesnake Kisses is available on Kindle and paperback formats.

A native to the Rio Grande Valley, Michael has always been a fan of horror. A self-published author, when he is not writing or binge watching movies, he spends it reading. With an attempt to amass a library's worth of books, he will read anything and everything that comes his way. He can be found on Instagram @Wafmichael. Read Full
More posts by the Author »