The Temple of The Witch

THE SATANIC REVOLUTION TOUR IN SUPPORT OF ROBERT EGGERS’ THE WITCH (AUSTIN, TX)

As Robbert Eggers debut masterpiece The Witch continues to stun audiences upon its February 19th opening, some of the attention towards the film could be attributed to the fact it was officially sanctioned by The Satanic Temple (TST). In an unprecedented move by the Temple, it initiated a ‘Satanic Revolution‘ in conjunction with interactive performances to accompany the release of the acclaimed motion picture. In New York City, on February 10th, TST launched premiere screenings of the historical horror film, with ritualized pronouncements of a ‘New Satanic Era’. With only four cities visited on the exclusive tour from TST, Austin definitely seemed to take heed of the fact it was among the few chosen, with a massive crowd making its way to watch one of the spokespeople of TST, Jex Blackmore, passionately drop some wisdom upon the Bat City. 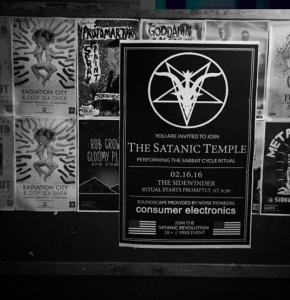 Downtown Austin was hoppin’ more than usual for a Tuesday night on the sixteenth of this month. Word has spread The Satanic Temple was in town, to much chagrin from conformists, religious zealots and lawmakers. I, on the other hand, was immensely overjoyed. I made my way to the venue well in advance, anticipating a large turnout for this rare occasion. I felt electricity in the air upon entering the Sidewinder, my nerves dancing. Out of anxiousness I immediately made my way to the bar for a beer, and to scope out the venue. I notice the exit to the back patio where the stone stage overlooking the creek, was blocked off by two young ladies happily standing guard and greeting warmly all who approached.

My interest in TST was actually piqued months before their arrival in Austin. I had heard of their efforts in Florida last year to distribute Satanic coloring books and reading materials to school age children, in response to the local politicians and school district allowing an Evangelist Christian group to hand out Bibles to the students but censoring Atheist materials. TST, in defense of the separation of Church and State, only thought it fair that ALL possible religions be represented and learning materials readily available for anyone requesting them. In my eyes, they are perfectly correct. Double standards should not be an issue in justice or religion, yet sadly we see examples of just this almost daily. After learning about this sneaky but absolutely legitimate checkmate they just pulled on the religious right wing among others, it prompted me to dive further into what TST stood for.

Number 1 of the Seven Tenets which are held in the highest regard to TST is to strive to act with compassion and empathy towards all creatures in accordance with reason. Simple, yet so fucking profound. Take a moment and read that over, let it sink in. It struck me with such significance when its meaning fully dawned upon me. I craved more information, and what I craved I was respectfully given.

“The Satanic Temple holds the basic premise that undue suffering is bad, and that which reduces suffering is good. We do not believe in symbolic evil. We embrace blasphemy as a legit expression of personal independence from counterproductive traditional norms.”

Luckily, I had a solid beginners knowledge of what TST was striving for and what it believed in when the announcement was made The Temple had officially backed Eggers film THE WITCH. My immense anticipation to experience the film was heightened upon learning TST would do an exclusive tour immediately prior to the release. So last Tuesday, with many others, I witnessed The Satanic Revolution visit Austin, TX. 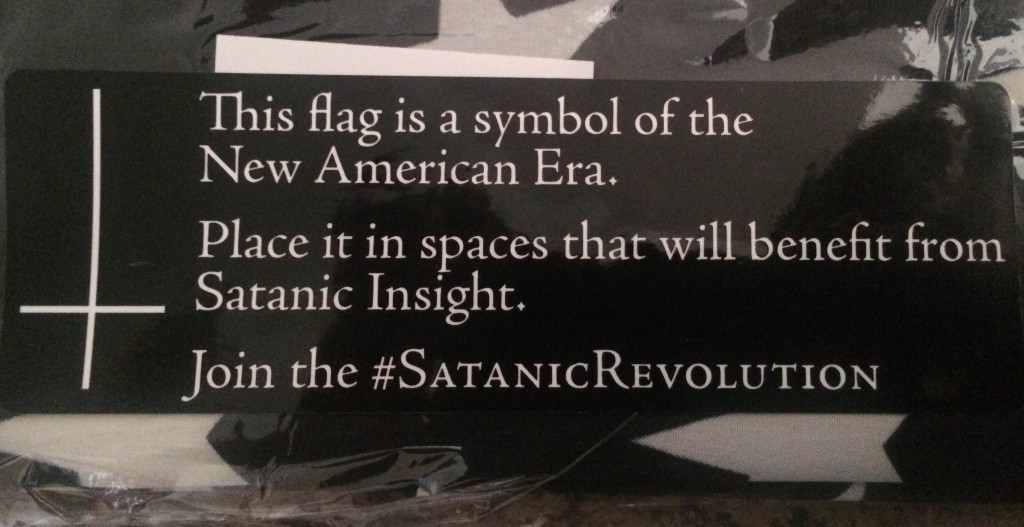 My anxiousness rose to new heights once I walked through those doors to the outside stone stage, being offered a full size black and white American flag. Written upon the unholy party favor, “place this flag wherever Satanic insight is needed”. Expertly placed audio equipment echoed the chains rattling something akin to Goblin performing music from Suspiria. It was dark, with few dim lights. A man clad in leather banged a large chain up on the stage, with his fellow practitioners beside him. On each side was an individual completely cloaked, one in red and one in black. Next to them, on each side, was a young nude woman and man, who at first were simply standing silent, occasional eye contact occurring with the audience. Eventually unveiling herself as one of the cloaked figures upon stage, Jex took her position behind the podium, slightly elevated at the center. 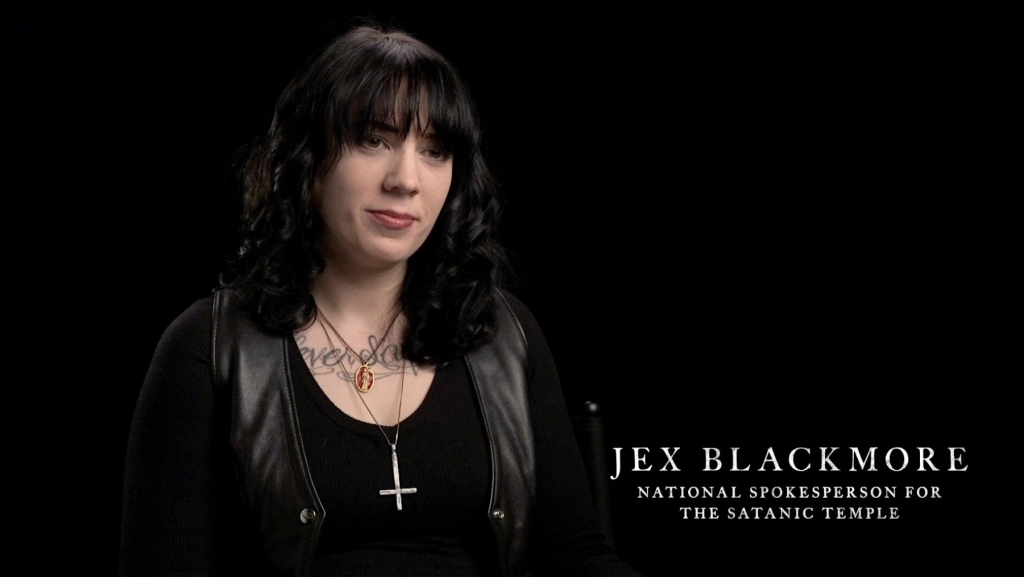 As her rally cry for the Satanic Revolution became more passionate and aggressive, her unclothed compatriots started to consume what was possibly red wine, quite furiously out of large glass growlers. Despite the no photography/no filming rule, professional photographers rapidly captured shots, from every angle possible. I was surprised that I found it difficult to even begin to describe the rush of feelings flooding throughout my entire body and mind when I heard her words which desperately sought to evoke a need for citizens to arise, and to awake.

“Stop being ashamed! Stop feeling repressed! Do what YOU want to do! Accept personal responsibility!” – Jex Blackmore, TST Spokeswoman

Satanism, and TST are not for the meek, or the blissfully ignorant. Taking stock of every Satanist I have ever met who legitimately practiced their religion, most were extremely intelligent and damn near always incredibly articulate. The gentleman who agreed to answer some of my inquiries regarding TST, was no different. As a ranking member within the Temple, introducing himself as a Satanic Priest, Gideon was forthcoming and polite, engaging and honestly kind of funny. Gideon spoke with confident ease, possibly treading these same waters many times before. But despite how easy it seemed for him to answer or explain some issues, he seemed to relish the one or two occasions where he had to pause and reflect upon what I asked him.

In asking about what the mission, or purpose of TST was, Gideon explained that they wish to mobilize a movement of politically aware advocates for individual liberty. Encourage practical common sense and justice, and demand the rejection of tyranny. 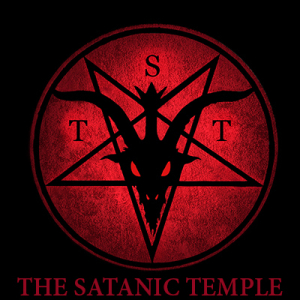 The Temple is in fact very active in establishing an angry voice directed at the Government. Many petitions have been initiated by TST (several on Change.org), often receiving favorable results for themselves. What I found fascinating were the multitude of rather charitable causes TST participates in. One particular Chapter in the frigid Midwest collects new socks for the many homeless individuals in their cities. This aptly named Socks 4 Satan. Another Chapter conducts Black Cat Rescues, and the Temple is a staunch supporter of both Women’s and Gay rights. Conveying to Gideon my surprise for such endeavors, he was very quick to point out that Satanism is not the new humanitarian movement I may be viewing it as.

“Satanism is reserved for those who have approached evil, thus becoming so tormented, so tortured…embracing blasphemy as a right. As a way of life.”

Gideon’s voice was low as he said this. Speaking slowly, obviously aiming to emphasize this fact he just shared with me. It appeared to me, that it’s for those individuals that experienced their own personal hell at some point in life, also the demonic repercussions that follow. “Evil has already been met by some, so they are aren’t necessarily afraid of facing it again,” pointed out Gideon. Painful reminders of one’s brush with Hellfire seem to be helpful in initiating curiosity about Satanism admitted the Satanic Priest. However you may look at it, Baptism or Curse, in regards to individual scars made by Hellfire, one can conclude a heightened ability to face more is born.

As I read TST literature, I noted that to them, Satan is viewed as the eternal rebel, helping signify proud and responsible individuality. To be completely honest, what I read and learned was surprising, and I’m almost certain it would challenge most people’s preconceived notions of what a Satanist is. TST is relatively new, adding another Satanic religious denomination to the Universe and, more importantly, offering a well educated and very pissed off socially aware platform. 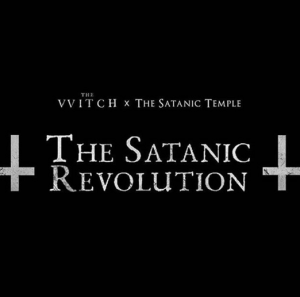 The deep deep psychological dread Robert Eggers delivers in the film The Witch, is masterful. The common and debilitating issue of lack of communication coupled with increasing paranoia set the tone for the systematic break down of a devoutly religious family. Unfortunate circumstances mount, with the families isolation becoming a formidable foe as well. These are all elements still faced in contemporary times, which is why I imagine TST found it appealing. Despite the seemingly well rooted Biblical beliefs of the family of six, it was not enough to promote togetherness among them. The words spoke during prayer and scripture seemed to be given no weight or significance, uttered in vain. Lies between the family bred fear and guilt, ultimately igniting a tragic division.

The incredibly historically accurate tale is also causing a division amongst film fanatics. Some moviegoers citing the lack of gore, along with supposed horror ‘guidelines’ not adhered to, discount this film from being classified as true horror. However you may feel about this particular topic, you can’t negate the fact The Witch is a powerful reenactment of hollow faith destroying lives.

I recommend you see for yourself.

Editor’s note: You can also read our full review of THE WITCH here.