Straight From the Factory: Antibirth

Hard-drinking, pill-popping, bong-ripping Lou (Natasha Lyonne, Orange in the New Black) and her best friend Sadie (Chloë Sevigny, Boys Don’t Cry, American Horror Story) spend their days adrift in a druggy haze. But one wild night out becomes a bad trip that never ends when Lou wakes up with symptoms of an unexplained, highly abnormal pregnancy. Who — or what — is growing inside of her? Making its Blu-ray and DVD debut  February 7th, 2017 from Scream Factory, in conjunction with IFC Midnight, Anitbirth also includes psychedelic clips, storyboards and theatrical trailer as bonus features.

As Lou’s due date approaches with alarming swiftness, the fear, paranoia, and conspiracy theories begin to pile up. Spiked with blasts of hallucinatory color, surreal shocks, and subversive comedy, the audacious feature debut from Danny Perez is a no-holds-barred descent into delirium. 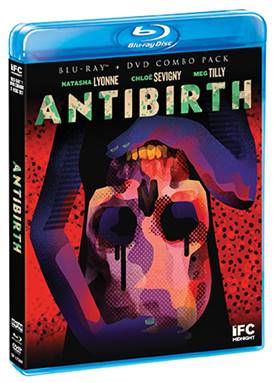