Straight From the Factory: Deadtime Stories

Your favorite nightmares come to life in a salute to the age-old bedtime story ritual when Deadtime Stories arrives on Blu-ray + DVD, and digital formats, from Scream Factory™ on February 28, 2017. The set is loaded with bonus features, including a new interview and new audio commentary with co-writer/director Jef Delman, and new interviews with actors Cathryn de Prume, Melissa Leo and Scott Valentine.

Travel on a mysterious journey to a medieval world populated by blood-crazed witches, evil experiments and captive maidens. Then from the catacombs and dark caverns of medieval Europe, you’ll plunge into modern suburbia and the adventures of a female jogger stalked by a savage werewolf. Finally, sensuality will become macabre, black comedy as you follow the trail of three bank robbers who share their country house hideaway with a sweet murderess. 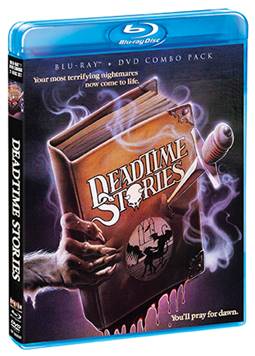