Jess Franco’s “Marquis de Sade: Justine” is a lush bodice ripper, with some great moments, but by no means his most twisted. 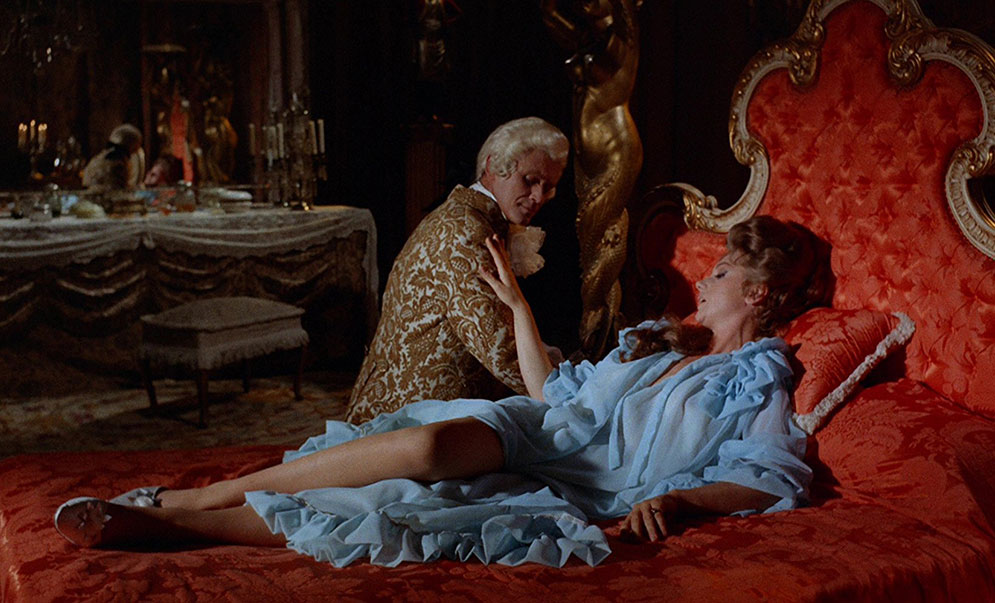 With this piece I mark my return to the exploration of Jess Franco’s eurosleaze. The column has been an on-again off-again affair up until this point, but I want to make a more solid commitment to it. Not weekly, but perhaps a new movie covered every other week.

I feel the need to apologize to the more experienced and academic Francophiles out there. My past two forays into the casual cinematic whirlwind of Jess Franco were fraught with inexperience and misunderstanding. His zooms are not accidental, the occasional blurriness is to confuse your eyes, and adhering to “reality” and common dramatic/narrative sense would compromise his art. You have my sincerest apologies, and my plea to keep in mind I’m still learning about this artist. This will be the third adventure in my search for Jess Franco.

It will be a challenging thing to write, since the whole point of my column is to celebrate Franco’s cinematic spazzo-kinky weirdness, yet Marquis de Sade: Justine, while full of Franco fetishes and sexual perversions, is one of his most grounded and easily digestible movies. 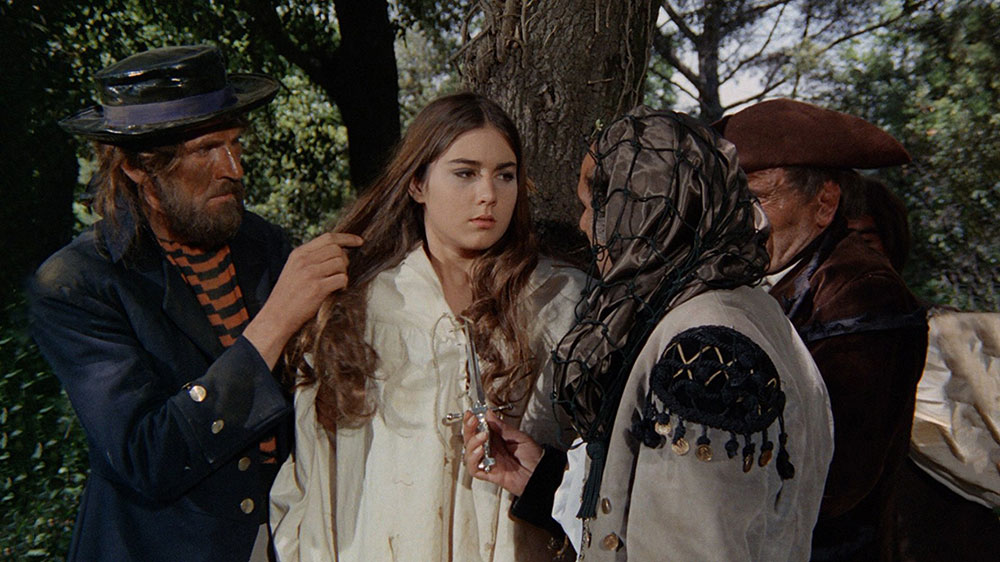 Like an overwhelming majority of his other movies I’ve seen, lead actress Romina Power (who plays Justine) is exceptionally beautiful, like an effigy taken from an exotic garden that only he knows about. A very good way to describe all of Jess’s leading ladies, indeed. Romina has a youthful, sweet face and an odd, trancelike emotional quality, with deep brown eyes ready to swallow up the world.

Interestingly, Jess intended from the beginning of the production to cast Rosemary Dexter as Justine. He even rehearsed lines with her. She is stunning as well, yes, yet in an ordinary runway model sort of way. I think that would have thrown off the whole aura of how innocent and chaste the Justine character needs to be.

Hollywood backers insisted he cast the daughter of Tyrone Power, so Jess had to compromise. That’s something Franco passionately hated doing, because he valued his ability to freely express his ideas, and anything disrupting that he greatly resented. 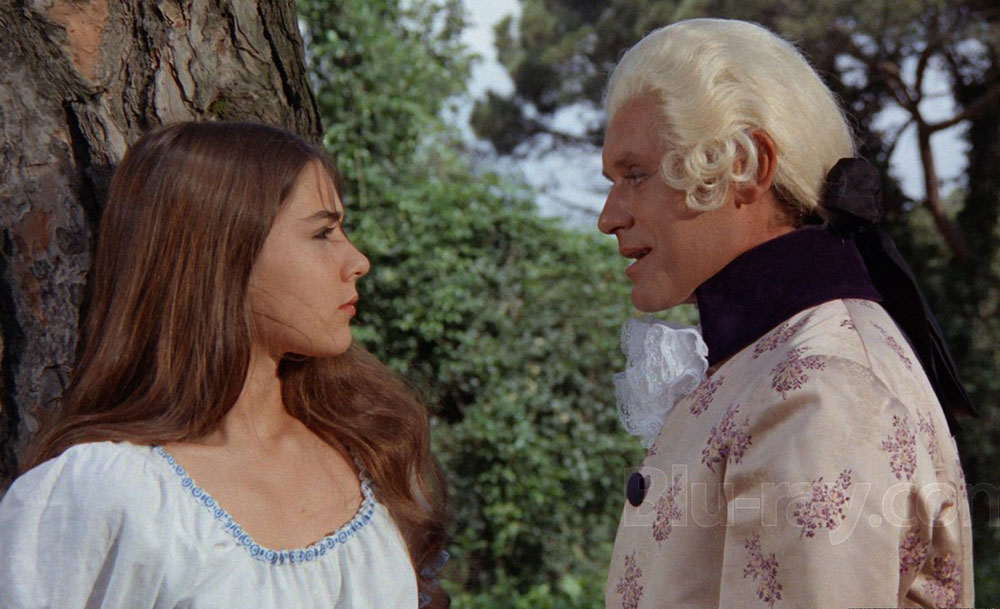 In a Blue Underground interview, Franco recalls in a humorous though frustrated tone “. . . she was the daughter of Tyron Power, of course, who arrived all of a sudden, chewing gum, “Hello Jessy”, like that. Shit! It was very difficult for me because she was a passenger, wandering around, as if I was making Bambi 2 . . . Romina Power arrived with her fucking mother on top of it and with some sort of boyfriend. I don’t know if he was both their boyfriends, or if he was with the mother or the daughter . . .  he was an Italian and he was taking pictures and he was a prick . . . we had a difficult shoot because with her, it wasn’t that she was difficult, but she was like a piece of furniture.  You could take her and move her somewhere, tell her, “come over here, look that way.”

Whether it was because of acting experience or something else, Jess felt that Dexter was more emotionally mature for the role, and he had to change his script dramatically in order to accommodate the youth (seventeen) and inexperience of the new lead. 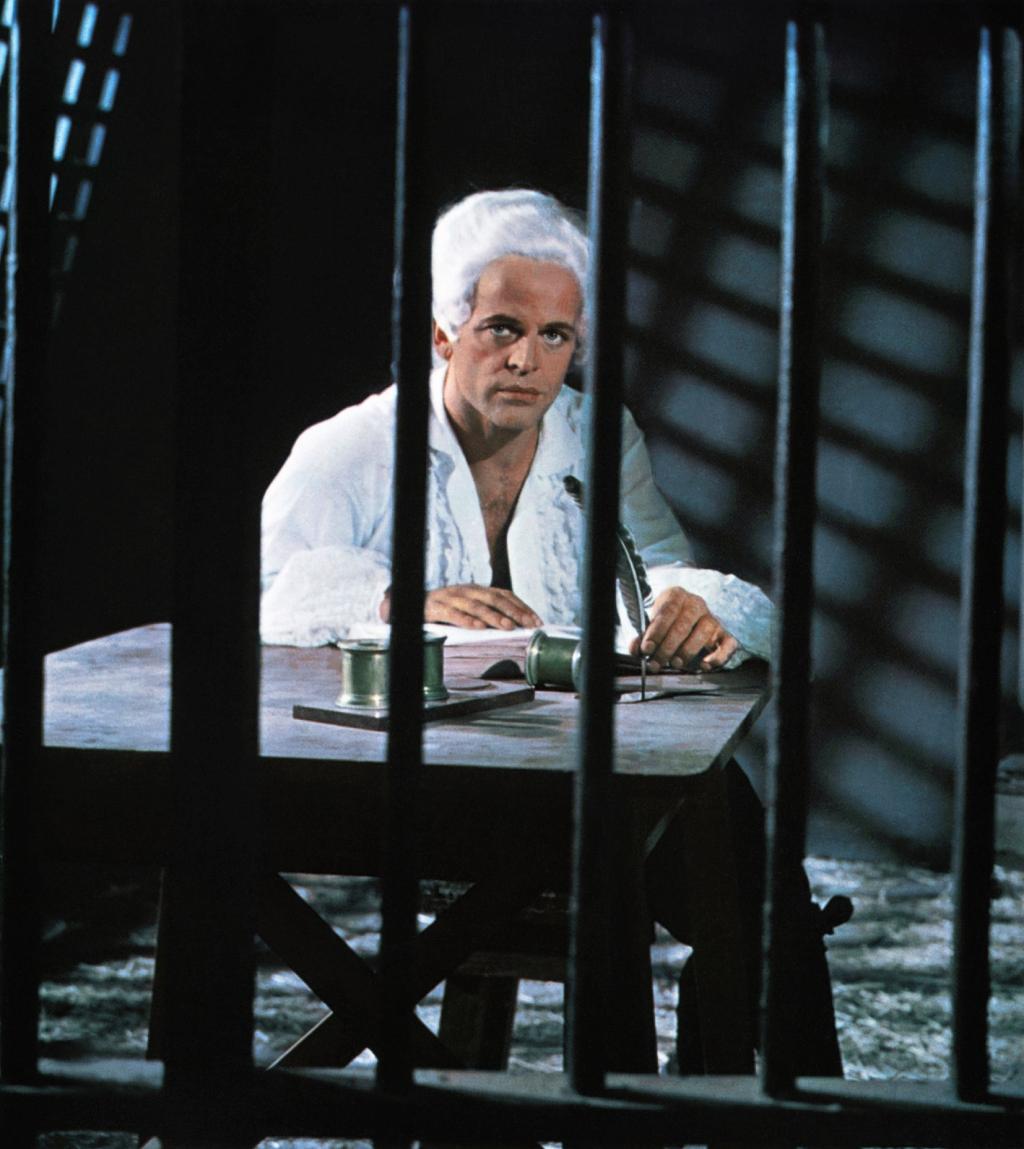 A luscious period piece set in 1700s France, Marquis de Sade: Justine details the dirty daydreams and stories de Sade writes from his prison cell.  The Marquis is played by jagged-faced lunatic Klaus Kinski, and it is a shame that he is used simply to bookend the story, with the occasional confounding torture hallucination. A naughty crypt-keeper, if you will.

With Kinski in a cage, we don’t get to experience him at his fullest potential.  I like that phrase.  “Kinski in a cage.” Fun with words! While imprisoned, we see de Sade begin writing what would eventually become his book “Justine”. As he writes and narrates, we are taken into Justine’s world.

Buckle up, because here we go, Franco’s got us! 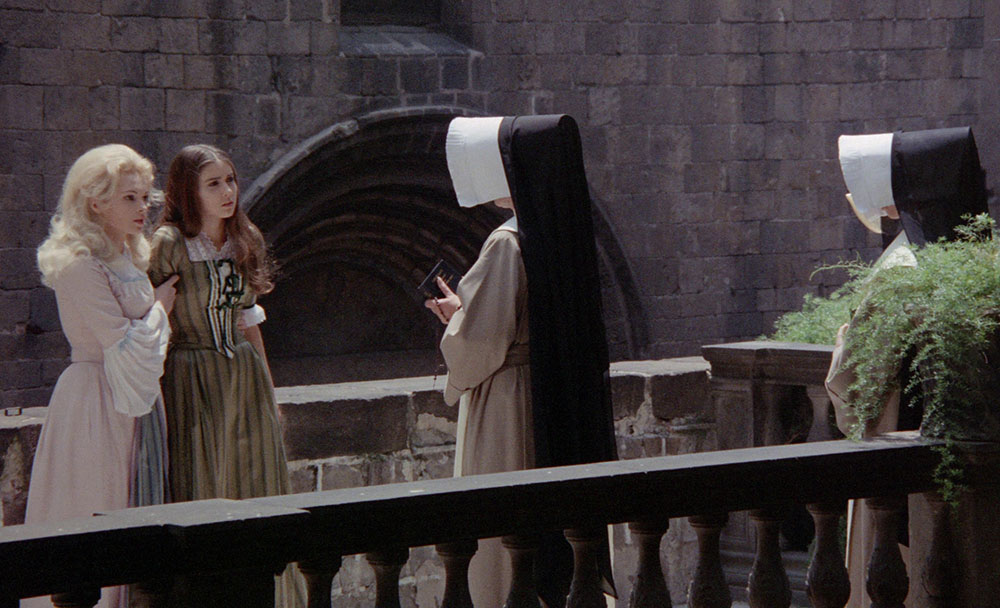 Young sisters Justine and Juliette live in a nunnery and possess a fair amount of gold. When their father dies, they are abandoned by the nunnery and left to fend for themselves. Juliette is a somewhat worldly, cunning, and survival-minded woman, and is played by the gorgeous Franco regular Maria Rohm. Juliette opts to join a brothel and learn the delicate art of prostitution. Well, that’s the way de Sade/Franco look at it, anyway.

I found it rather odd that not only does the nunnery kick the young women out, but Juliette and Justine separate so nonchalantly. But it’s Jess Franco, so just shrug your shoulders and go with it.

Quite the opposite of Juliette, Justine is very chaste, virginal, and naïve. Justine seems to just float around riding the bumpy and unpleasant winds of life and have random dangerous sexual encounters with scheming, sneering, sweaty men, yet none of them end up corrupting her. She always escapes their clutches, mostly through luck. 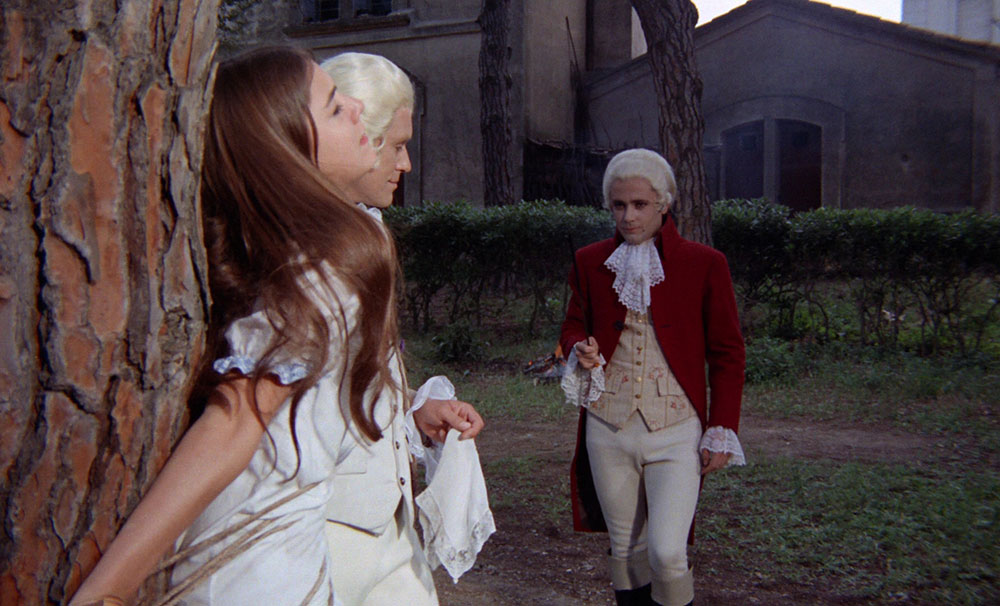 I was reminded of old Warner Brothers cartoon characters: Elmer Fudd always seems to come close to snagging Bugs, but never quite gets him. Wile E. Coyote hatches plans that defy the laws of physics, but no matter what he does, the Road Runner gets away. Far away.

And this cat-and-mouse scenario mirrors the perils Justine faces, only with yucky men instead of cartoons. Although, I must admit, much of their behavior borders on the cartoonish too, especially with what ends up happening when she joins a band of criminals led by Mercedes McCambridge (who would four years later provide the voice of the demon in The Exorcist).

Because of her overwhelming virtue and beauty, and also because we’re dealing with Marquis de Sade here, sinister men are constantly trying to either rape or own Justine as a sex slave. But she always seems to pull through and avoid atrocious tragedies and sexual defilement.

However, as she has these experiences, she begins to realize that she enjoys the mistreatment and abuse. In voice-over narration, de Sade discusses the philosophies of pain and pleasure, and Justine has some interesting monologs and observations about the guilt over what is happening to her.  She talks about her desire to be good, when in reality she IS good. She’s just a victim of experiencing sexual discovery in horrible circumstances.  It’s a strange contradiction that maybe I’m picking up on only because I think too much. Or have very questionable morals.

During what clearly looks like Justine’s final moments, she encounters her sister again, and she lives happily ever after with one of the few men who was nice to her during her ordeal. But not before being ensnared in a trap set by Father Antonin (Jack Palance) and his order of monks, which is without doubt the craziest scene in the film and a fan-favorite. 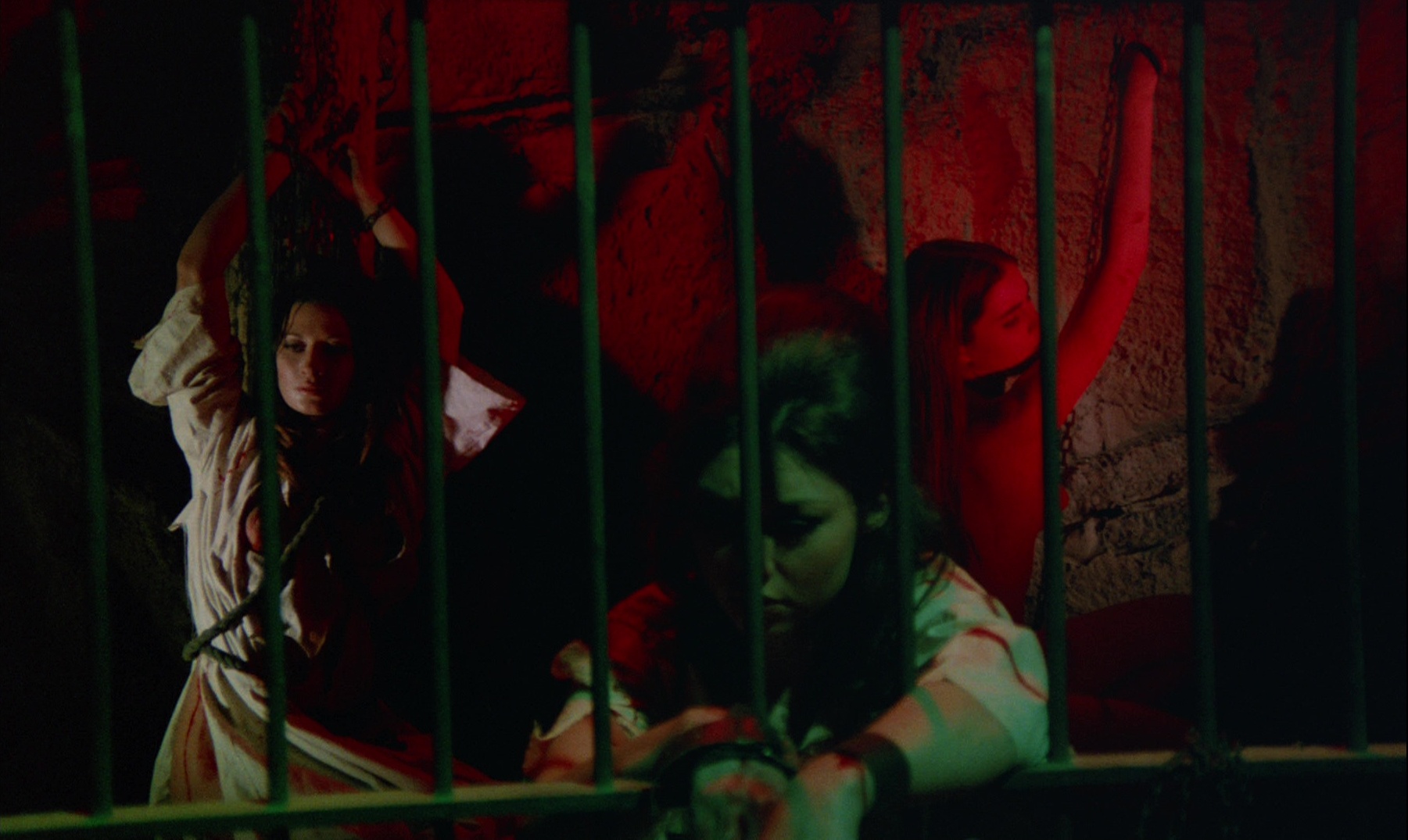 She remarks how strangely-colored their robes are. Oh yeah, and there’s all those women standing around with breast holes cut out of their raggedy clothes. Father Antonin and his monk friends are in actuality sexual deviates, and quickly drag Justine into their sex-torture dungeon. There is a little more philosophy here about how she “suffers” a life of virture.

Jess Franco said he enjoyed working with Palance very much, and that he had a great onscreen presence.  said Palance was worried he was going to have to do a nude scene, but was delighted when Franco told him at one point he was going to float around like a saint. Palance was blind drunk during his entire time on the set. He started drinking red wine at 9AM, and this is blisteringly clear. 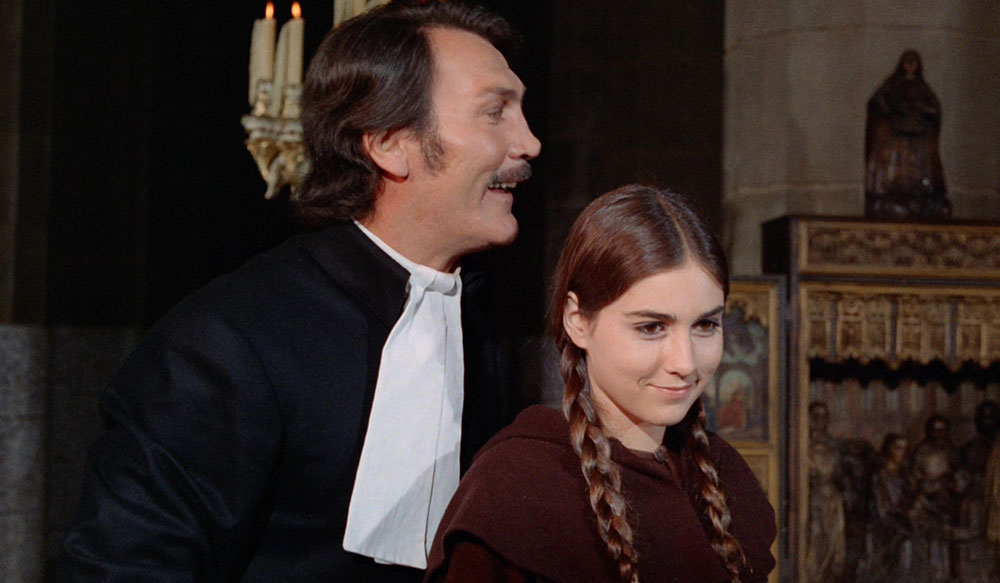 It’s truly one of the most bugshit mad scenes in movie history. To think that these were the takes that Franco used. OH THE WONDERS OF THE CINEMA!! OH JESS FRANCO, HOW I LOVE HIM!!

There really isn’t much else I can say about Marquis de Sade: Justine. Truthfully, there’s a lot I can say, but time, space, and attention span are formidable constraints. Even though it’s a fairly rational film, it’s still a Franco film, so it rides a delicate edge between something anyone could enjoy, or something only fans enjoy.

Conclusively, I like it very much, but it’s not a gateway Franco movie by any means. I have plenty of those that I’m saving for the dog days of summer.

I am including here a short compilation of all the scenes Palance was in. Someone had the brilliant idea of putting them all on YouTube, so everyone could experience the joys…