Surprisingly rich with both plot and visceral shock value, “Dead & Buried” is an unsung ’80s horror gem worthy of inclusion among the genre’s greats. 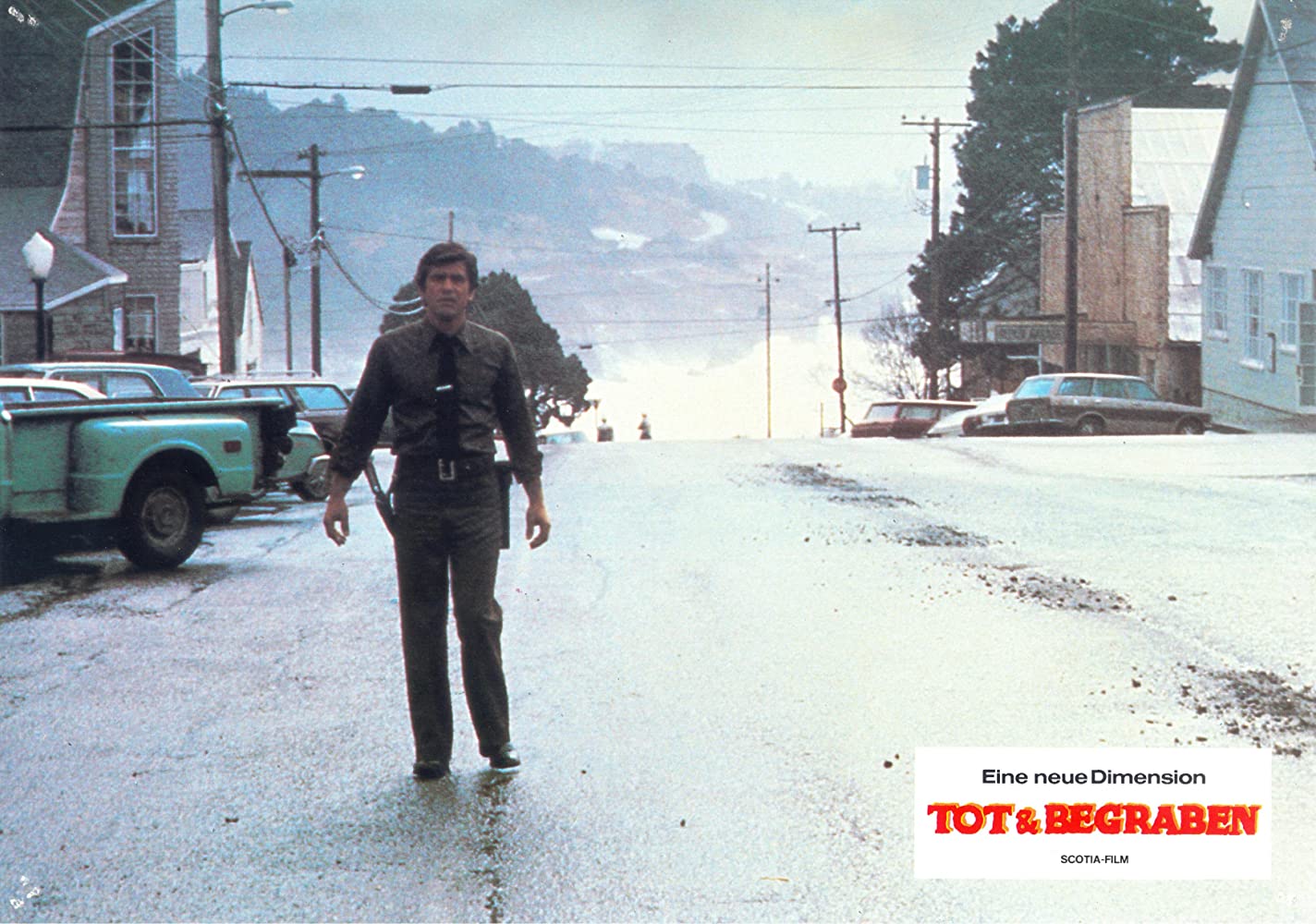 When Guillermo del Toro was 17, he donned a mustache made of fake chest hair just to sneak into Dead & Buried. If that’s not enough to convince you it’s worth a stream, there’s nothing I can do. That said, I’m going to try anyway.

The last few Shudder Sundays have been directly inspired by this necessary and necessarily upsetting moment in American history. That moment is far from over, no matter what the hot-or-not social media algorithms might have you believe. Given there’s already buzz about Shudder’s as-yet-unnamed doc on the history of queer horror from director Sam Wineman, and more underrepresented voices are added to the service by the month, I’m also far from over writing about this moment.

In the meantime, I wanted to indulge in some ‘80s comfort food — 92 minutes of fleeting distraction that wouldn’t have anything at all to do with the world out the window.

Dead & Buried is about the ritualistic and regular murder of outsiders in the name of preserving Norman Rockwell’s America. 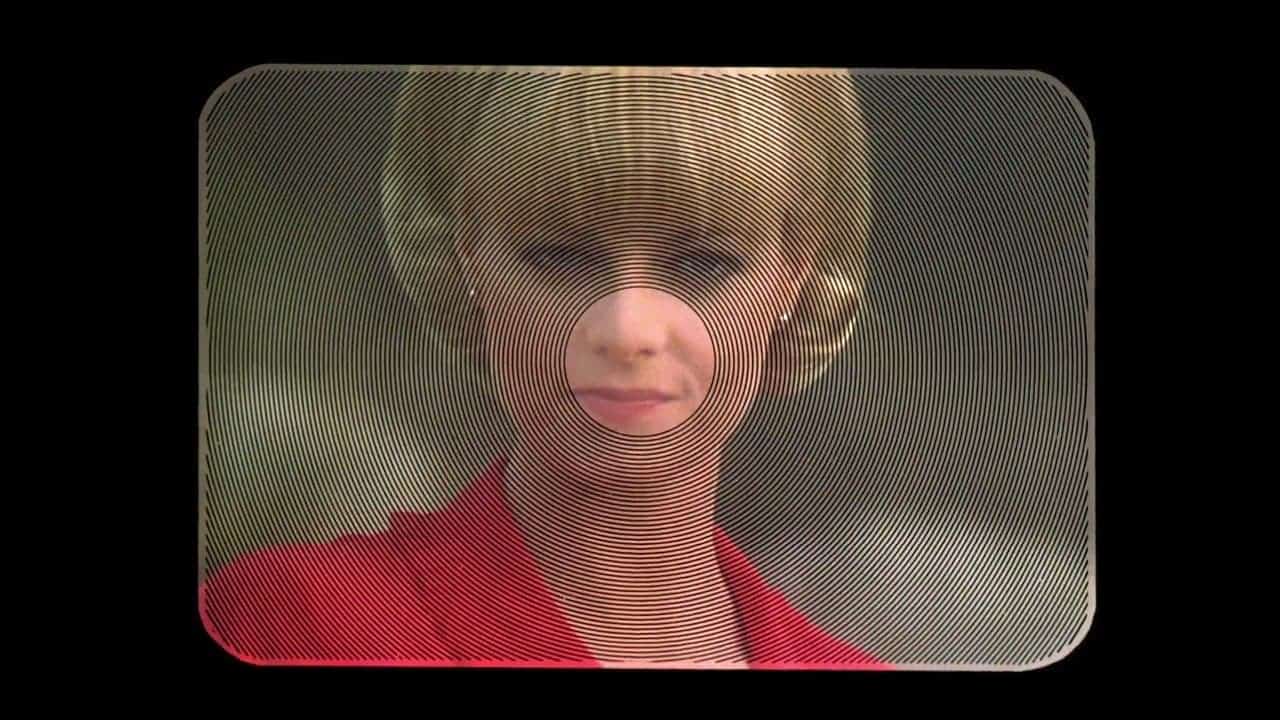 Diners that would never pour stale coffee, for deputies who would never draw their guns. It may not be smack in the foreground, but like all great horror, it’s hiding in plain sight like a shadow among shadows. Whether or not you see it depends on how close you sit to the TV.

Though it doesn’t wave so many literal flags, Dead & Buried’s closest existing kin is Jaws. New England beach town cop from the big city deals with a growing body count nobody seems to believe as locals prove less than cooperative. Sheriff Gillis even drives a GMC Jimmy like Chief Brody did in the Jaws 2 we know and tolerate.

Dead & Buried’s closest non-existent kin is the Jaws 2 that Let’s Scare Jessica to Death director John D. Hancock filmed for a month before falling prey to studio politics. Only one shot of Hancock’s sequel survives in Jeannot Szwarc’s Jaws 2 — the shark’s blue-stained day-for-night entre into a freshly unsuspecting Amity — and no other footage survives, save the odd set photo. The original vision called for fallout. Dead beaches and shuttered gift shops. An ever-present fog plagued the island like meteorological mold.

The reason such atmosphere was vetoed on Jaws 2 is exactly what makes Dead & Buried work; it’s no fun at all. 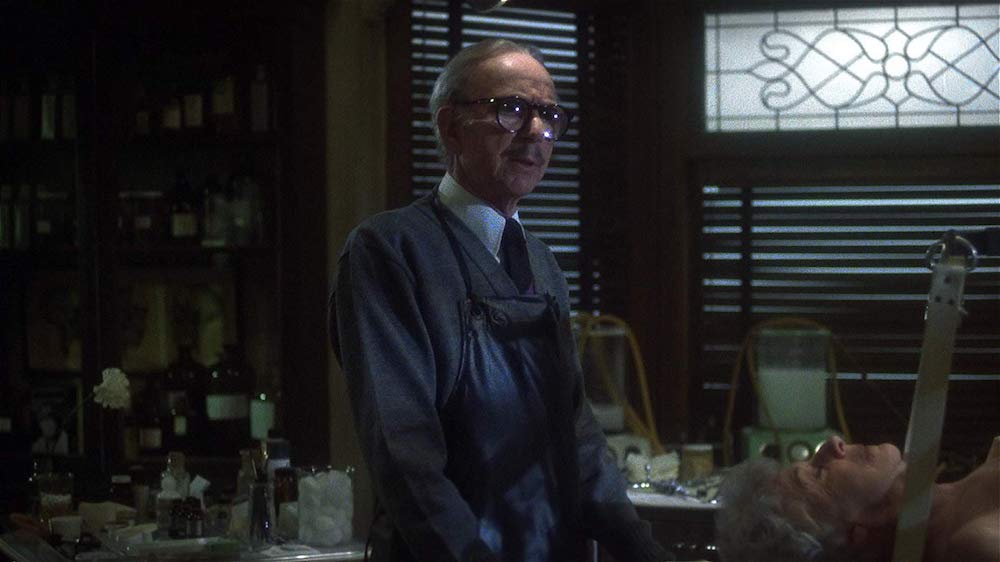 I don’t mean the movie — Dead & Buried is a couple of Day-Glo transitions away from Creepshow. But from the postcard that slowly animates beneath the opening credits, Potters Bluff looks wrong. It raises the same subconscious alarm that tells us the difference between a nightmare and a dream by the wallpaper of imaginary rooms.

If the little hairs on the back of your neck aren’t already at attention, the first five minutes restate the point with force.

A turtlenecked photographer admires an obstinate sea. He captures the stick-legged birds, the stoved-in lobster cages from voyages long forgotten, the mysterious blond that asks all the right questions and unbuttons all the right clothes. With melancholy noodling from Child’s Play composer Joe Renzetti, it plays like a cologne ad. Then the earth-toned locals bludgeon the photographer into submission, tie him up in a fishing net, and politely set him on fire.

The way Dead & Buried shows its hand turns it into a retroactive procedural. 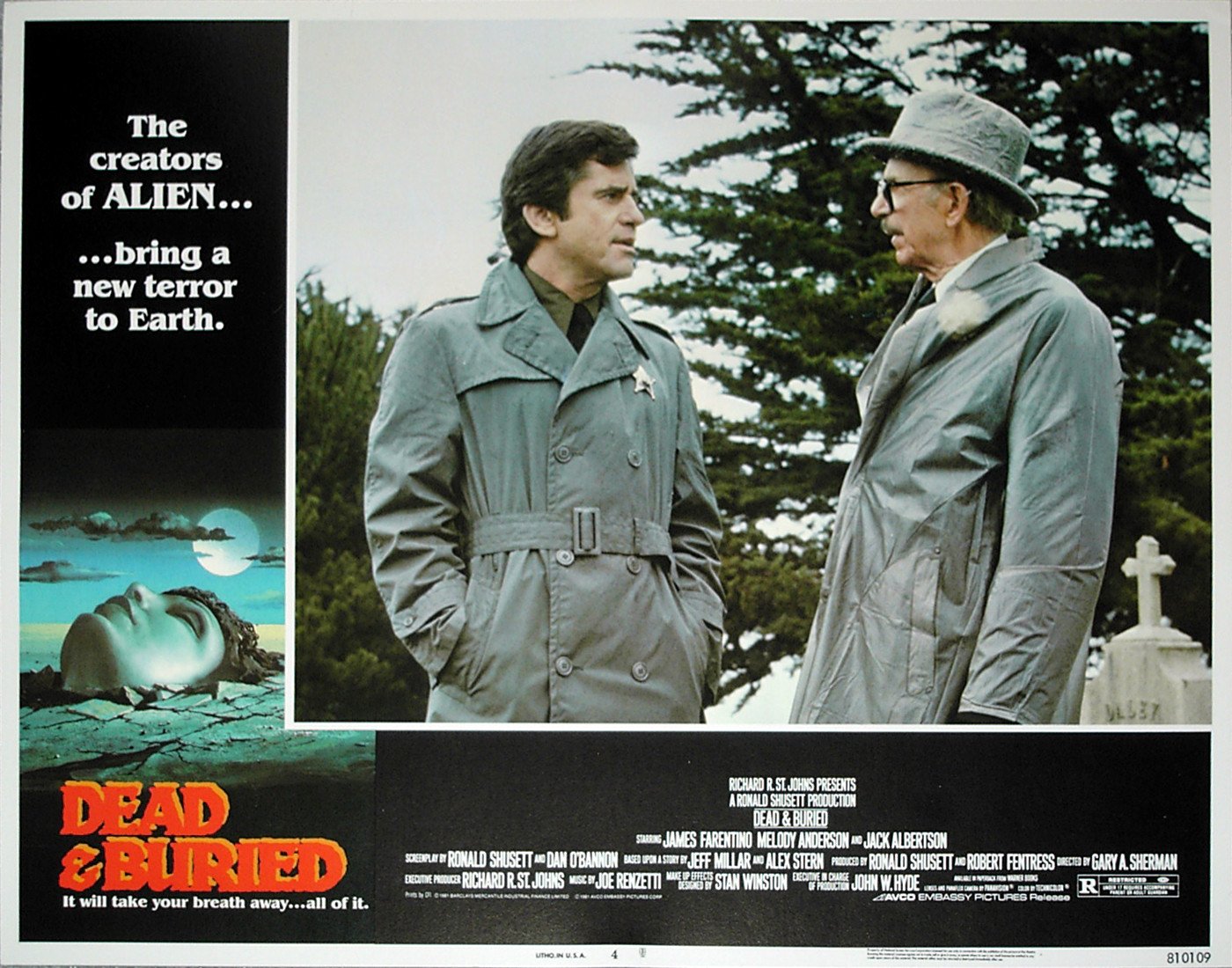 We see the next grisly murder-by-committee, then wait for Gillis to figure out what happened. It’s the kind of structure that might wear out fast if James Farentino wasn’t such a watchable store brand-Brody. He enters most scenes pleasant, all-business, and leaves them alternately furious or terrified. His climactic meltdown is more raw (and deserved) than you might expect from a sorta-kinda slasher.

Blame the sorta-kinda on Stan Winston, patron saint of Terminators, Predators, and robot Dinosauria. A year before his first Oscar nomination and The Thing made him a legend, Winston snuck some of his most quietly unnerving work into Dead & Buried. The first animatronic gag cut me clean to the bone, so I refuse to give it away. Though it expects you to underestimate the quality of effects a movie called Dead & Buried deserves.

Another, though, is almost more famous than the movie itself.

The hunky photographer that got burnt to a crisp survives, believe it or not, though without enough skin left to match him by his driver’s license. He is a mummified thing on a hospital bed, only an eye and a lip-less grin giving him away as human. When Gillis walks in for questioning, the photographer wheezes, moans, and gasps madly. It’s all he can do to tell the sheriff who damn near killed him, but it’s still not enough.

That body in the bed is a puppeteered robot and one of the scariest I’ve ever seen. 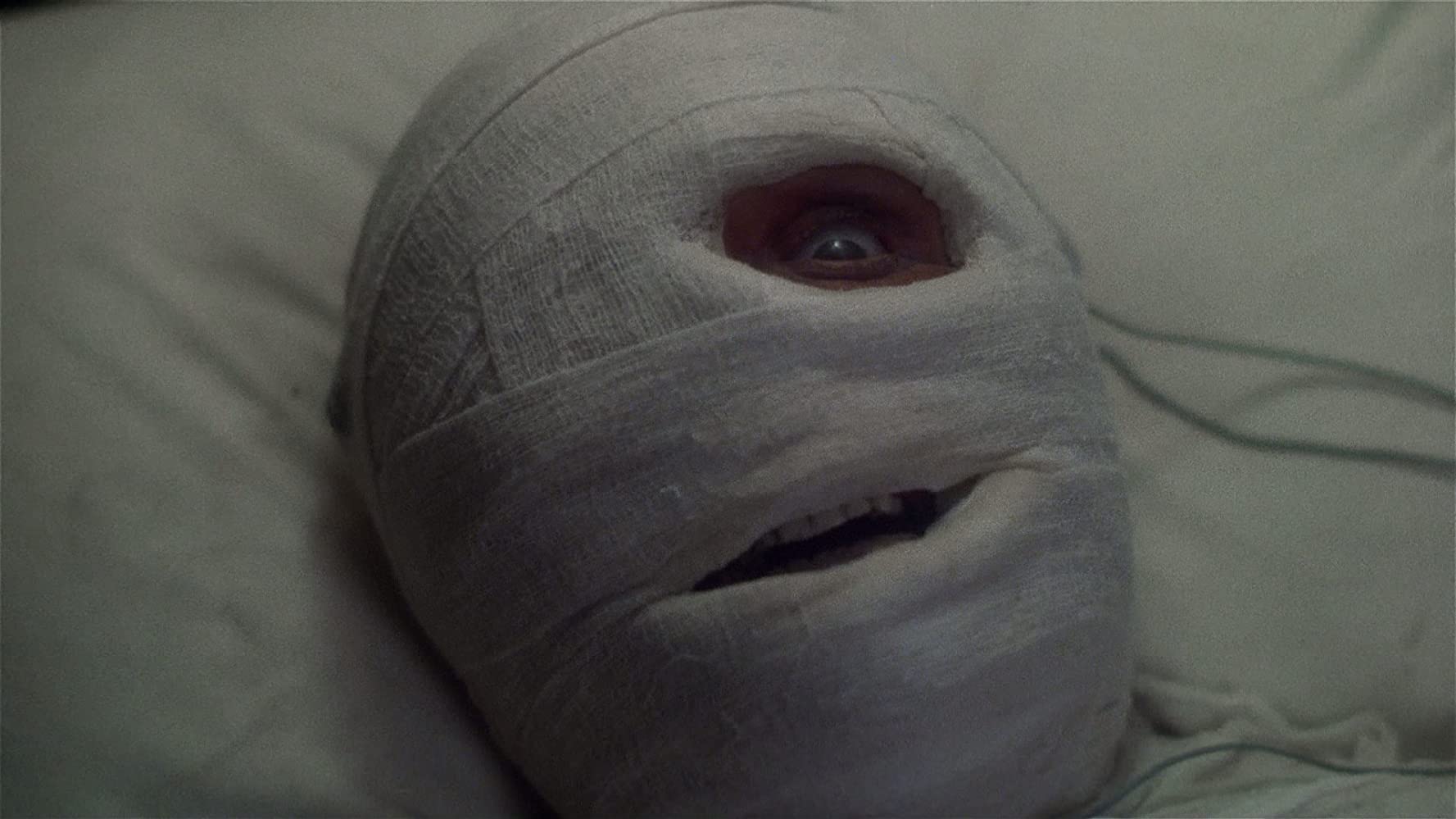 Winston didn’t do too many like-it-says-on-the-tin human rigs in his career — it’s harder to fake what we study in the mirror on a daily basis — but the expected uncanniness only steers into the skid here. We pity the poor guy. At the same time, we can’t stand to be in the mildew-painted room with him. Robot or no, we wince when his clock gets punched in proto-Jason fashion.

All of the deaths in Dead & Buried are similarly brutal, which might explain why it never found an audience in 1981. The stabbings, slashings, and other bloodlettings are more impressive than anything in the inaugural Friday the 13th, though the one murder Stan Winston didn’t oversee sticks out like a pulsating forehead. But even with two fewer minutes on the run time, Dead & Buried has a lot more plot. The script from Alien scribes Ronald Shusett and Dan O’Bannon, though the latter claimed his name was only on it as a favor, leaves room for conversation among the killings.

The three-dimensional characters outnumber the cardboard. As director Sherman intended, it’s also pretty funny — it takes a special kind of horror movie to turn the mortician against the sheriff for failing to identify a corpse and, thus, preventing that corpse’s family from enlisting his services for an open casket funeral. Then again, if you’re tuning in to see Jack Albertson, that’s Grandpa Joe if you weren’t aware, waltz around the morgue to big band and call his creations “souvenirs” in what would sadly be his final performance, there are probably more head-cavings then you might expect.

For general horror audiences at the time, teetering on the edge of the slasher boom, it’s neither fish nor fowl. 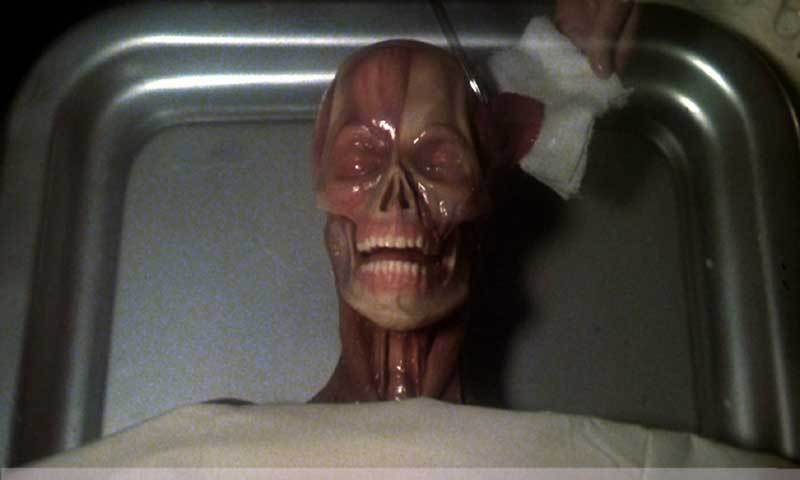 Some of it is, was, and forever shall be silly. I dare you to find a more egregious use of the Teacher-Teaches-Impossibly-Relevant-Lesson trope in the genre. Though the last five minutes do say something interesting about the sheriff’s ignorant role in a town so openly homicidal, the reality of the situation doesn’t hold up under scrutiny.

But for the few that did see it at the time, mustachioed Guillermo included, Dead & Buried leaves subliminal landmines in your brain long after the TV-movie freeze-frame ending.

It’s absolutely riddled with the kind of imagery that kids would see on the wrong channel on the wrong night and carry into their adult unconscious. Morgue tables sliding open on their own. A severed arm still wriggling in the grill of the car that sheared it off. Black-and-white home movies of grinning kin gathering around a couple of strangers having sex like they’re the punchbowl at a Christmas party.

Though Gary Sherman may be most famous for the practical effect sleights-of-hand of Poltergeist III, here he directs even the simplest shocks with uncommon valor. 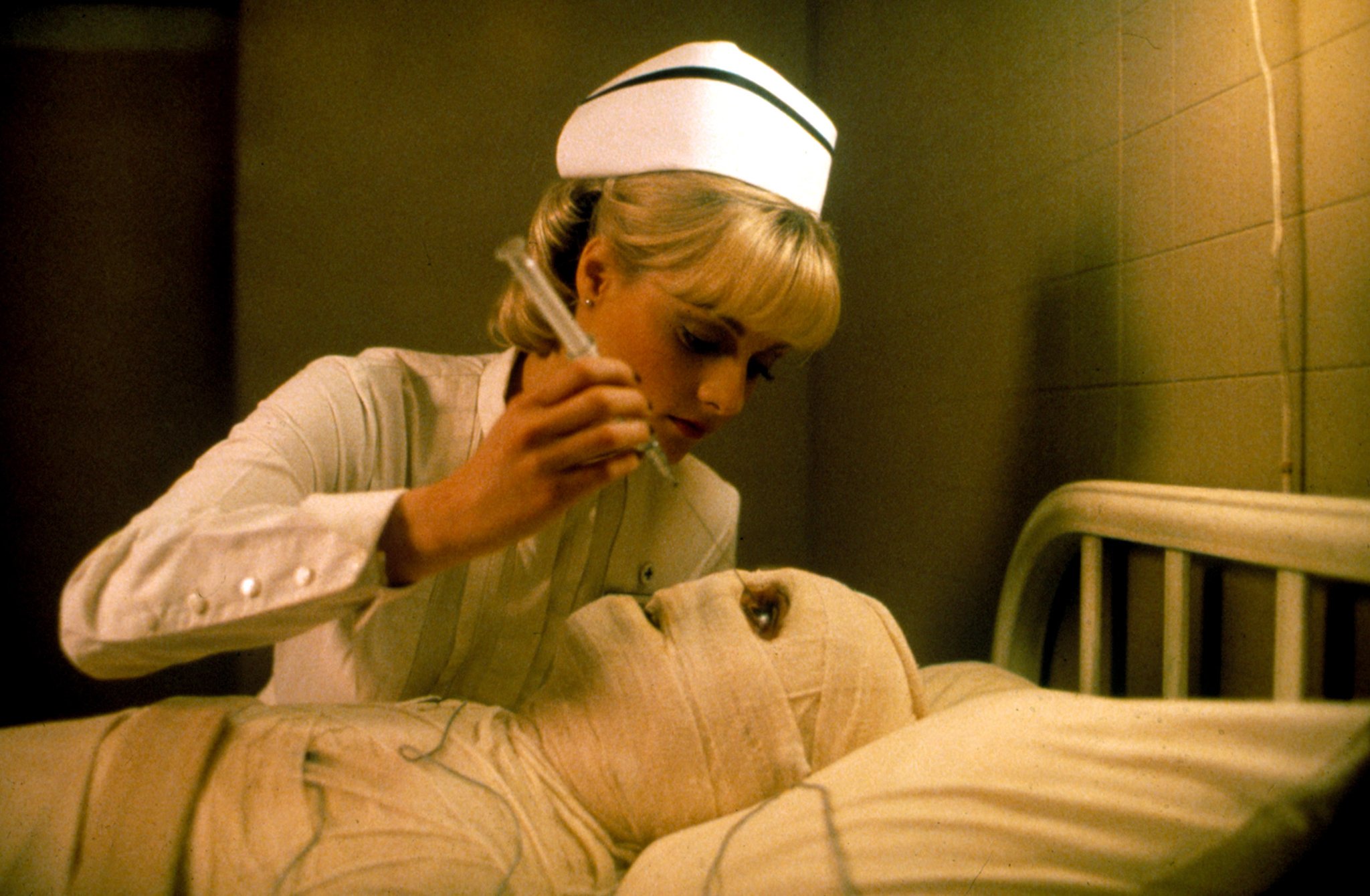 All horror is a surprise, plus or minus a little Manwich. Dead & Buried surprised me and hasn’t left my lizard brain since. It deserved more eyeballs then and deserves more eyeballs now.

That said, if you’re sensitive to eyeball trauma, you may want to skip this one. Seriously.