A (Very) Brief Study of Gender in Horror

Statistically Speaking: This academic study on the preference for horror among men and women may surprise you — and give you plenty to think about. 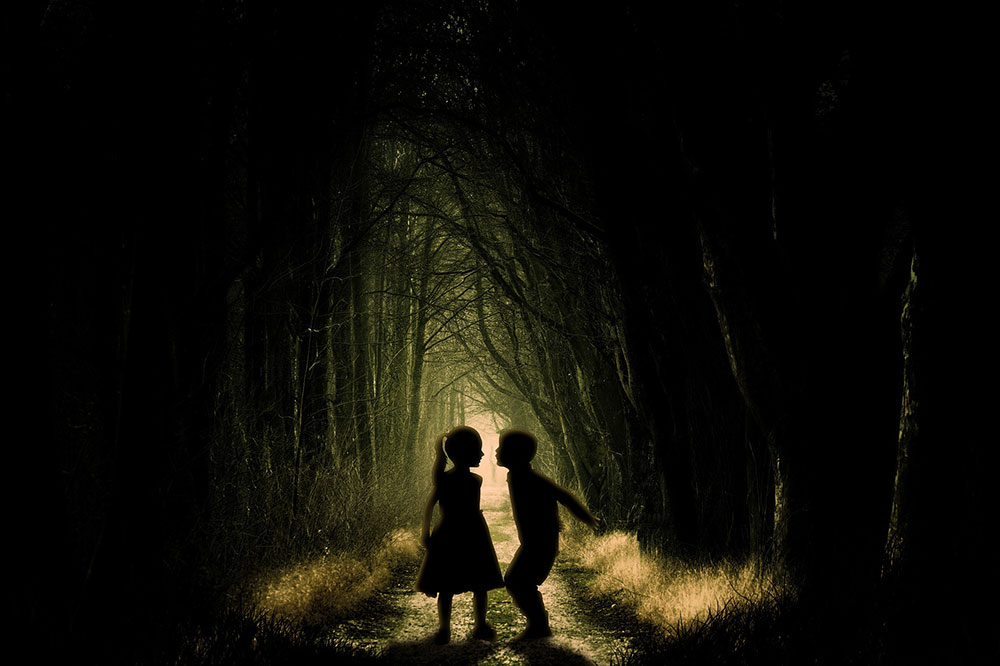 Ever wonder who likes horror more, men or women? I did. So I did a study that sparked a passion project of dissecting horror as it intersects with gender and other social issues. And you can help!

I’m a nerd, always have been. I can’t even claim the Internet crew of being a geek. I wasn’t playing dungeons and dragons in the spare room, I wasn’t killing it down at the local arcade. I was the less cinematically heroic kind of underdog. I was the library dwelling, research paper writing, teaching myself Chicago-style formatting over the summer break, nerd. I mean, it served me well through school at least, and I was too lost in fantasy worlds of Pern and Redwall and the ever expanding trauma porn fictions of V.C. Andrews to care too much about its impact on my social life.

Side note: What the hell was with V.C. Andrews? I’m sure I’m dating myself right now, but I was obsessed, as were all of my elementary and middle school friends. Have any of you read these as a non-pre-teen? They are so terrible! Abuse, and incest, and murder, oh my! Forget about unrealistic beauty standards for teens, what about not romanticizing boning your brother? How were any of us allowed to read this trash?! I mean… I’ve absolutely reread them all and absolutely enjoyed most of them, but how much did reading them as a hormone-addled teen actually screw me up? 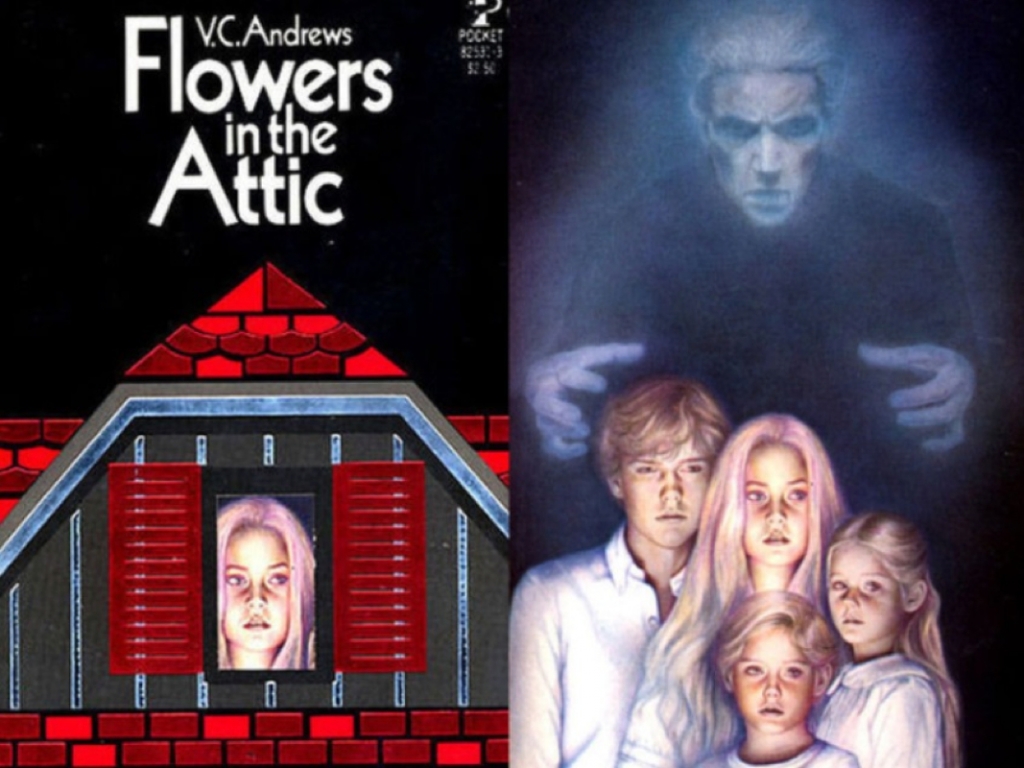 So when I get a chance to turn my lifelong love of research towards my equally beloved realm of horror (that’s a story for another day), it thrills me to no end. In 2016, I had to take a statistics class as a pre-requisite for another class. Of course the semester long project I decided to tackle had to revolve around horror! I came up with a simple question: “Who likes horror more, men or women?”

I designed a study in which I asked people to self identify their gender, and whether they consider themselves a horror fan. We were supposed to collect a minimum of 25 responses using a minimum of two methods, over the course of a month. I passed out survey slips on campus and posted it a few places online. In the end, I collected 571 viable responses. Remember: I’m a nerd.

I definitely had my assumption as to what the answer would be. Think about it, what are most horror movies filmed and marketed to? How many naked bodies in the shower being lovingly panned down have been male presenting versus female presenting? The obvious answer to me was that more men than women would self-identify as horror fans. In my personal life however, it’s the opposite.

I need to pause here and give a shoutout to my longtime friend/brother from another mother/queer educator, Thomas Crombie. I wanted to be mindful of gender identity and inclusiveness, so I ran my study past him before it went live, and he suggested some changes and questions to ask. I’m so glad he did, because not only did it wind up being more inclusive, but it wound up giving me really exceptional results. 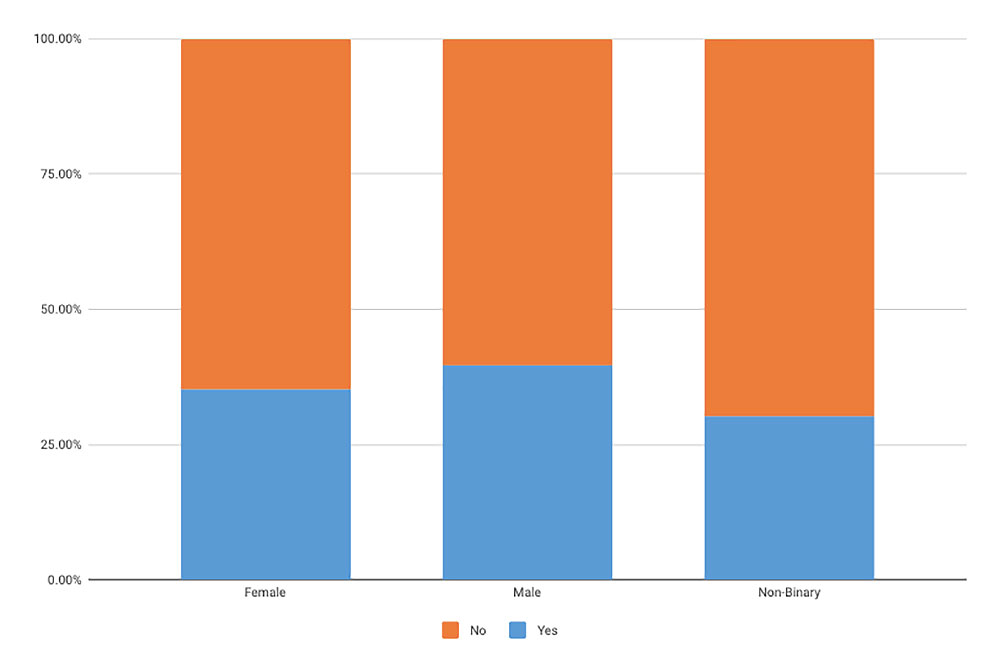 Are you seeing this?? Are you actually…. wait, my bad, I’m the nerd, you may not be. Let me point it out. 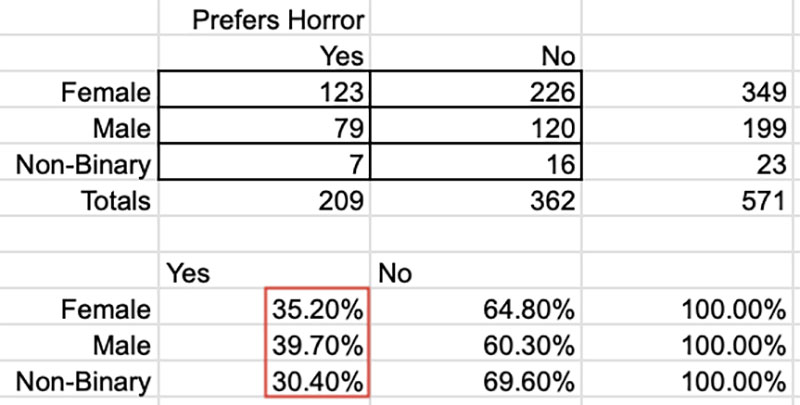 For my class, that’s as far as I needed to take it. Question, survey, result: There seems to be no correlation between gender and a preference for horror. For me, this can only be the beginning, because this begs a deeper question that feeds directly into today’s climate.

If men aren’t the only horror fans, if they aren’t even the clear majority of horror fans, why then are we inundated with misogynistic plots and imagery? Why are non-cis male led projects considered niche or not profitable? Why don’t we have more strong, non-male led franchises? I definitely have my theories (*Spoiler alert*: the patriarchy. The establishment. The “man,” both so-called and literal), but in this era of fake news and alternative facts, let’s begin this particular investigation with a return to reality.

If you’d like to help continue my research into this fascinating area of study — for science, for horror, and for the satisfied curiosity of this nerd — you can click here to add your opinions (anonymously of course) to the study.

I understand if you don’t want to. But d0 pay attention to the movies, shows, books — all art really — and enjoy an insight into where we are, and where we’ve been, through the blood-splattered lens of the monsters we fear most. 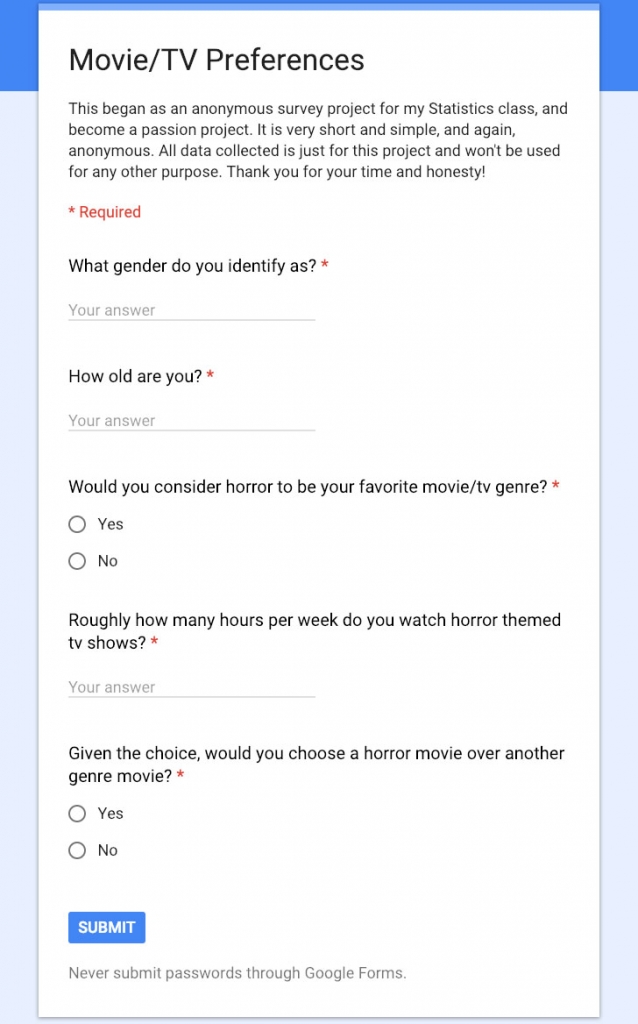