These memorable characters in horror films made being goth look sexy and cool, inspiring many of us to fully embrace the gothic lifestyle.

Welcome back to Morbidly Beautiful, my dreadful Ghoulies & Goblins. You know me as Miss J: The Goth with the most, Babe. For this week’s top ten list, I’ve decided to go with a list of characters from horror movies that inspired all of us to be Goth…or at least they did for me! 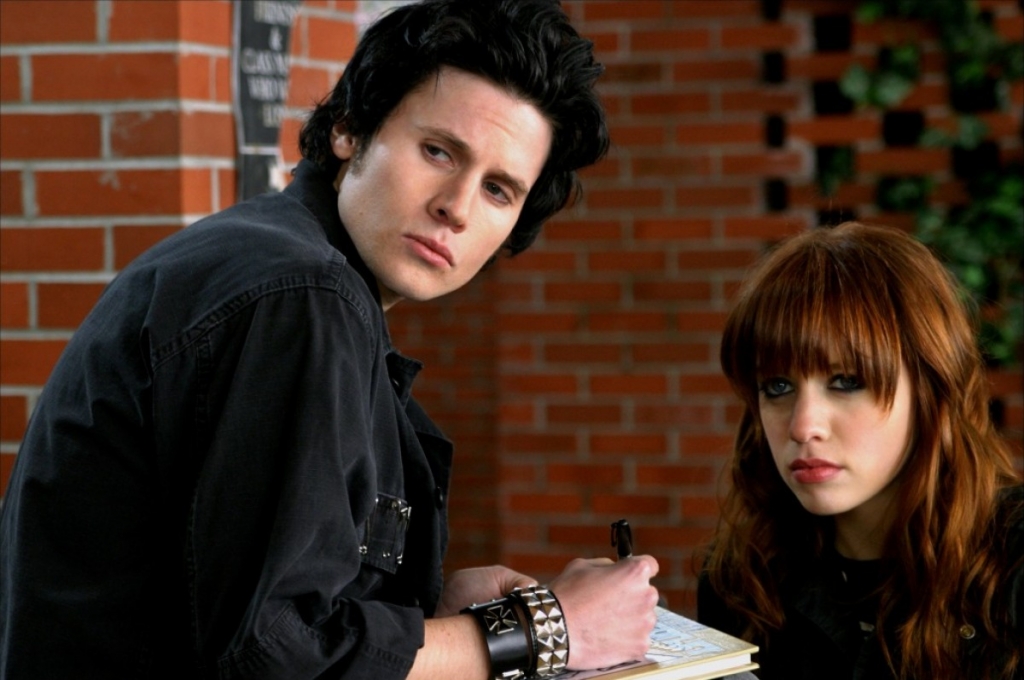 These two were 100% #gothcouplegoals back in 2006. They weren’t full blown Marilyn Manson Goth, but they were subtle about it and you could tell they were the creeps of the high school group. Ian McKinley was played by Kris Lemche, who pretty much looks like this in his everyday life — with maybe just a little less guyliner.

The Goth look back in 2006 was very different, and most people who were labeled as Goths wore jeans and black t-shirts, usually with a rock or heavy metal band on it. It has been said that Ian’s look was based on JD from the movie Heathers, which is another teenage movie that revolves around death. Kris also had two days to learn how to drive the forklift for that gruesome death scene where his girlfriend gets attacked by a nail gun; which is one of the coolest death scenes in the whole franchise.

Danielle Harris is a familiar name around the Horror community, but not so much in the Goth underworld. She plays the goth character Tosh Guaneri, the roommate of our main girl. Her character is killed off by strangulation and left with a bloody note that says, “Aren’t you glad you didn’t turn on the lights?”

It’s kind of a Karma moment if you really think about it. Tosh snaps at her roommate Natalie for turning on the lights and seeing her having sex. So when Natalie comes into the room the next time and hears noise, she assumes her roommate is having sex again and leaves the light off. Danielle’s style in real life is quite different from the character she plays, and she now knows how to apply makeup evenly. 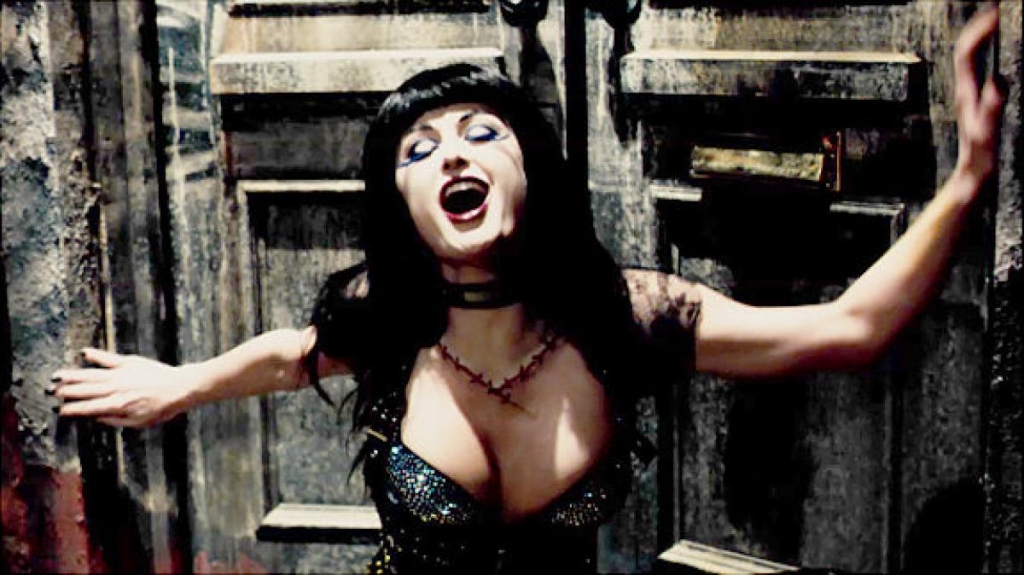 This movie boasts some serious Goth vibes, with all cast members representing the gothic style in some way or form. It’s quite an impressive cast, including Paris Hilton, Alexa Vega, Anthony Head, Sarah Brightman, and Bill Moseley. But Terrance Zdunich is the show stealer with his performance as Graverobber and the film’s narrator.

This Gothic musical is beautifully performed. Surprisingly, most of the costumes for Paris and her backup group came from Paris Hilton’s own closet. That gorgeous vixen never ceases to amaze me. Of course the fashion Heiress would have a goth stash. This movie is a Goth’s wet dream,  filled with smoky eyes and black lipstick for days. 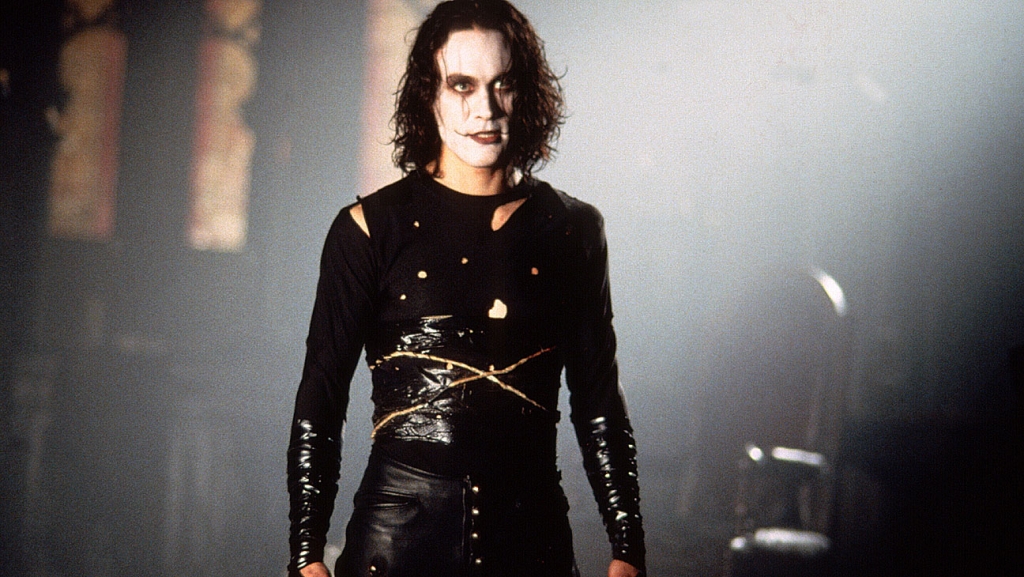 We all know that actor Brandon Lee tragically died while filming this movie and that it was an accident on set with a loaded gun that caused it. Brandon played Eric Draven, a broken lover who comes back from the dead to avenge the murder of him and his girlfriend. They had died on Hallows’ Eve, and the spirit of the character comes back in black and white face paint that symbolizes his transition as The Crow. He wears black leather and his Goth style has inspired hardcore fans every year for Halloween.

The director Alex Proyas wanted to film the movie in all black and white and only have the flashbacks with color, however he was denied this opportunity to make the film’s gothic vibes even stronger. Brandon Lee was probably more goth than you are. Before filming, Brandon had a morbid fascination with death and would drive around in a hearse listening to The Doors and visiting famous grave sites; that is a hardcore goth if you ask me. 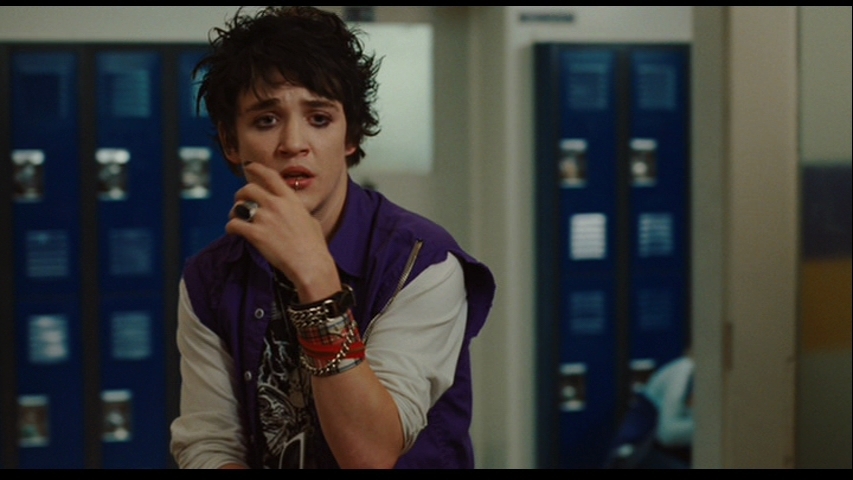 Actor Kyle Gallner takes on the role of Colin Gray, who becomes a hot snacky for Jennifer later. His style is very emo kid 2007 era with gothic elements. He wears band t-shirts, has pale skin with spikey black hair, and sports an excessive amount of guyliner and piercings. Colin also knows his goth history and invites Jennifer to a showing of The Rocky Horror Picture Show, which is in every goth’s movie collection (or should be).

Kyle also gets to sing his heart out to a punk version of “I Can See Clearly Now”, which is so hard not to sing along too for even the most goth person in the room. The band Low Shoulder in the movie even have gothic inspired fashion and aesthetic. Adam Brody plays the lead singer, and he is spotted with some heavy guyliner and black hair. Colin is a hottie goth boy, and that is why he is on our list at number six. 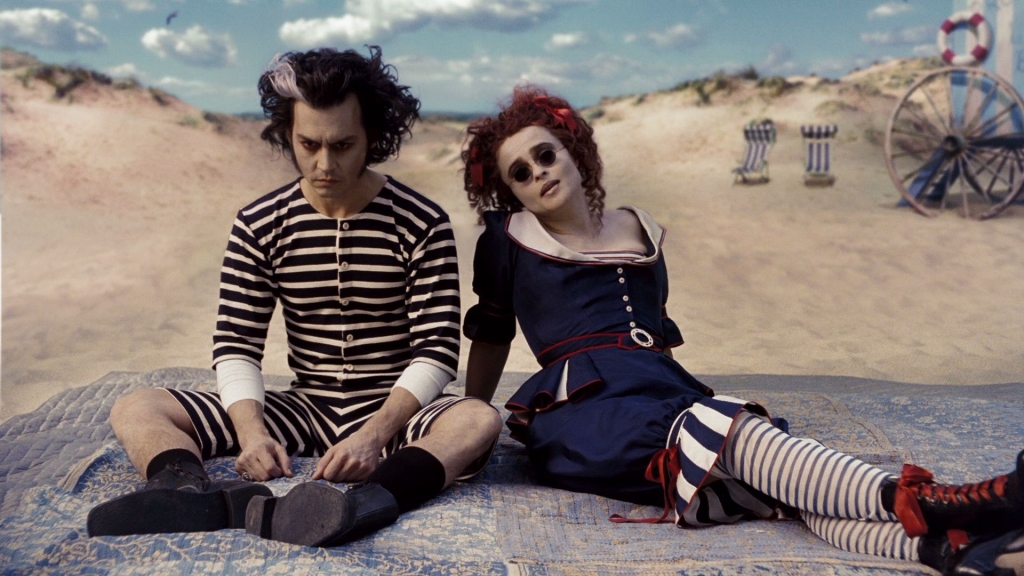 Johnny Depp and Helena Bonham Carter gave us such beautiful performances in Sweeney Todd. Tim Burton is every Goth’s favorite Director, and he doesn’t disappoint us with this film. The costumes that the cast wear are Victorian gothic and something that I wish would come back into style; I mean, have you seen what a pastel goth is? We need to go back to our gothic roots.

Johnny rocks male gothic apparel and even has a scene where he wears a black leather jacket that any goth would die for. To be fair, it was really hard to narrow down which Tim Burton movie I should pick with the most gothic vibes in it, because we all know this list could have easily been filled with his movies. But Sweeney Todd really stood out because we definitely needed some Victorian Goths on the list. Note: I especially love the scene with these two sitting at the beach. Who doesn’t love grumpy goth boys?