Posted by:
Tags:  Alien Cabin Fever Evil Dead Gremlins I Am Legend Pet Sematary Silence of the Lambs Sleepy Hollow The Hills Have Eyes The Omen

Not only do animals make the world a better place, but they often make movies better too; here’s a look at ten of the best pet sidekicks in horror.

Welcome back everyone to another top ten list! This week I will be counting down the best animal sidekicks in horror. It’s not just Disney that gets fuzzy best friends, but there have been many memorable ones in the horror genre. But beware, not all pets will be cute and cuddly. some of them are quite evil… 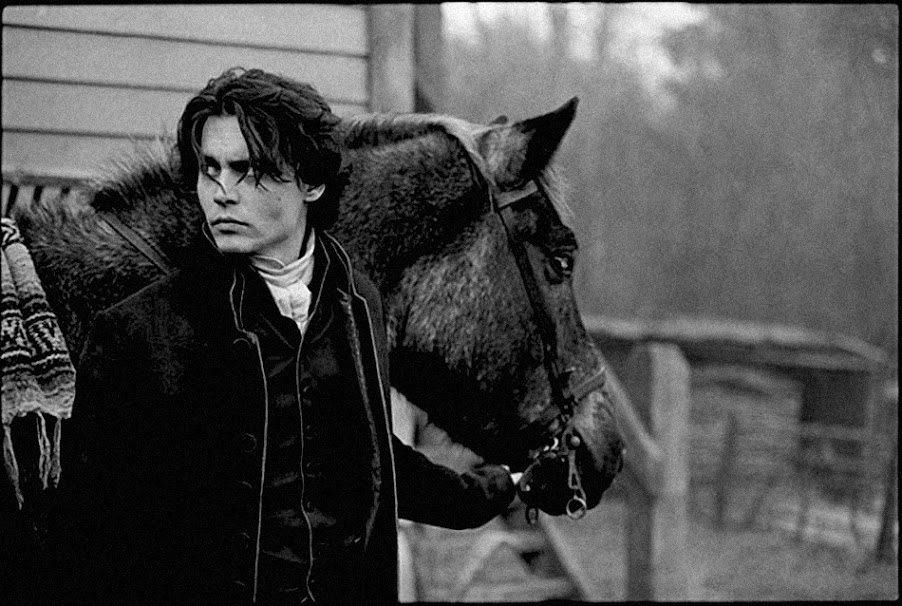 In the movie Sleepy Hollow, Ichabod Crane has a horse that is lent to him to travel around the haunted forest. Gunpowder is the name of the horse because he appears rather dusty and a little odd. Johnny Depp, who played Ichabod, actually adopted the horse (who’s real name is Goldeneye) after he heard that it was going to be put down after the movie was finished. The horse had given the cast and crew a lot to laugh about during filming because he was apparently very gassy. Who could let such a lovable, smelly creature such as that go? 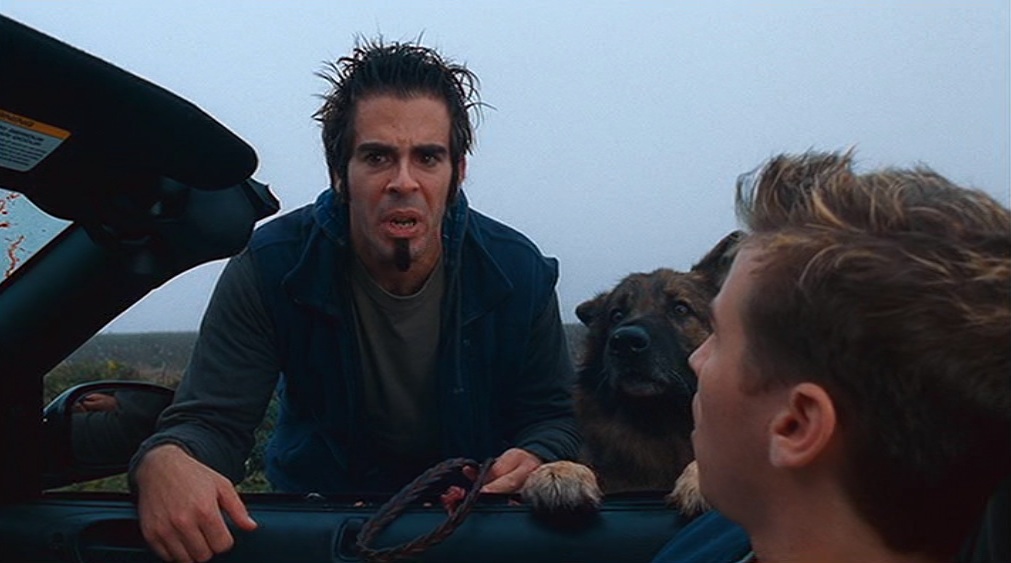 How can any of us forget that bathroom scene with the girl shaving her leg? I think ladies all around the world were scared to shave their legs after that. But, despite that gruesome scene, there was some definite cuteness going on in this movie. The Director, Eli Roth, did a cameo in his own movie and had a furry sidekick called Dr. Mambo, a beautiful German Shepherd. The dog seems friendly enough at the beginning of the movie, but soon becomes a killing machine.

Eli Roth had decided to use the dog from the famous Patrick Swayze movie, Black Dog. When the dog showed up on set, he was four years older and had really bad arthritis, and tired very quickly. They were out of options and had to go with an actual police dog to shoot the scenes with. Unfortunately, it was an attack dog. Therefore, none of the actors could appear on camera with it because it was very unpredictable, and the crew hid behind trucks during scenes and used remote controls to operate the camera. I guess you can say they all had a ruff day on set.

The remake is very different from the original film and even includes an extra cast member, Grandpa. David and Mia grew up with a very sick mother. After she passes, David comes back to help with Mia’s drug problem, and he brings Grandpa along to help her through her detoxing. Unfortunately, Grandpa was no match for the Necronomicon, and it is implied that Mia kills him with a hammer. David goes to confront Mia, and all hell breaks loose – literally. 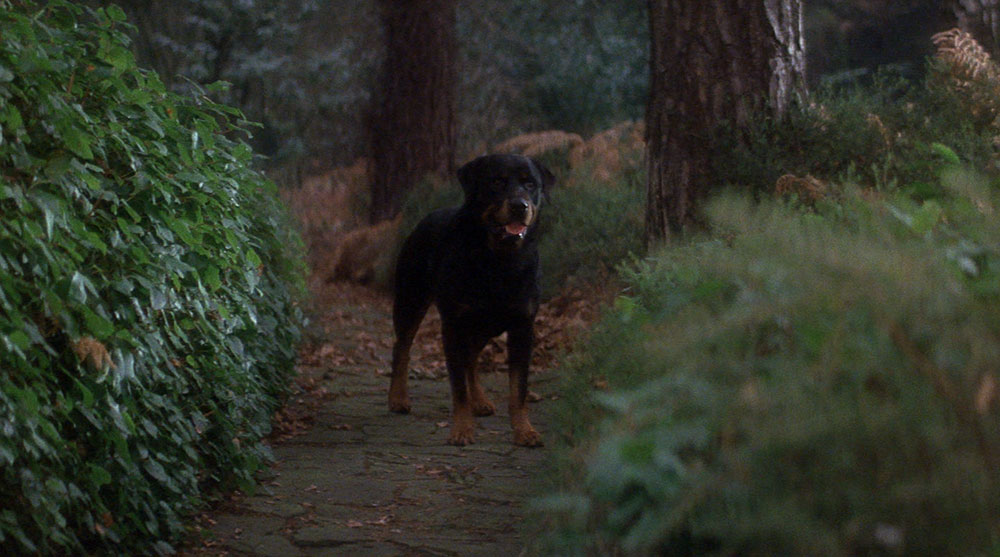 I guess we can thank this classic horror movie for the increase in popularity for the Rottweiler breed. The dog shows up and Damien makes friends with it, but never gives it a name. Apparently, the dog was incredibly gentle and loving, wanting to kiss and play with all his co-workers — nothing like the dog we see during the movie.

The director was such an animal lover that the scene where the goldfish bowl falls over was filled with already dead sardines, and they had painted them orange so they could look like goldfish. There was a lot of strange occurrences during the making of The Omen that make you wonder if evil truly does exist.

Okay, I know Mogwais don’t really exists, but that doesn’t mean that Gizmo doesn’t deserve to be on the list. Originally it was said that Steven Spielberg thought of having Tim Burton direct, but he hadn’t directed a full feature film yet. Could you imagine what this movie would have been like if he had been given the chance?

There are also plenty of real animals in this movie. Barny is Billy’s dog, and the richest (and meanest) lady in town has a bunch of cats. All the Gremlins were animatronics and cost quite the pretty penny. They would breakdown and cause production and filming to halt for hours; I guess they really were gremlins. 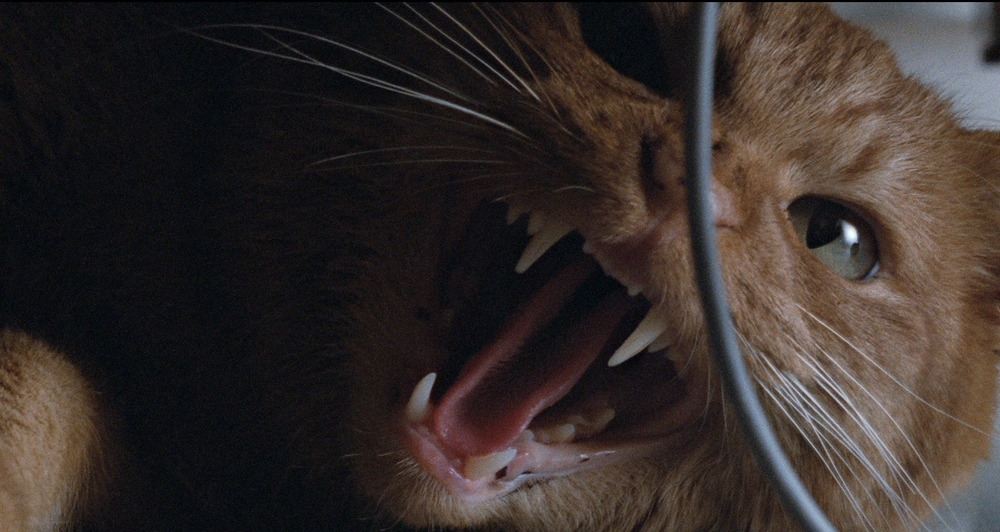 Would you want to go to outer space without your pussy… cat? Jonesy is a Ginger Tom and belongs to Ellen Ripley. His purr-pose was to keep rats off the ship, but I guess Alien’s weren’t a priority. To get a hissing reaction from Jonesy, a German Sheppard was placed in front of him with a screen protecting the two.

We almost didn’t have the magical duo. Sigourney Weaver’s skin reacted badly to the cat during their first scene together, and Sigourney offered to give up her role. But it turned out, it wasn’t the cat all all but rather glycerin sprayed on her skin to make her appear sweaty that was the culprit.

Jonesy has become a sort of icon over the years and has quite the fanbase, being referred to many times in the Halo universe and even having his own graphic novel called, “Jonesy: Nine Lives on the Nostromo”. Jonesy and Ripley are the only survivors of the first film and appear together in the sequel, Aliens. 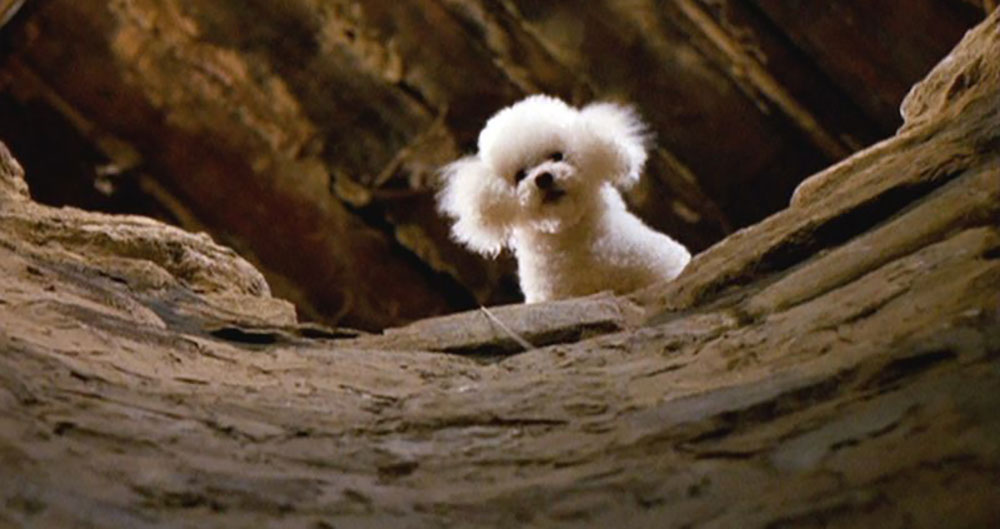 Even a psychopath needs a furry sidekick, though you might not expect that sidekick to be a tiny, adorable Bichon Frise. Her real name is Darla, and she had a career as an animal actress. She was in quite a few movies and died at the old age of seventeen. She will always be remembered because of the iconic scene of Buffalo Bill yelling down the well, “It rubs the lotion on its skin or else it gets the hose again!”

Precious wasn’t the only animal that Buffalo Bill loved; we can’t forget about the moths. They are called Tobacco Hornworm moths, and they were given celebrity status while filming the movie. They were flown in first class in special crates to the movie set and stayed in special rooms with controlled humidity and heat. 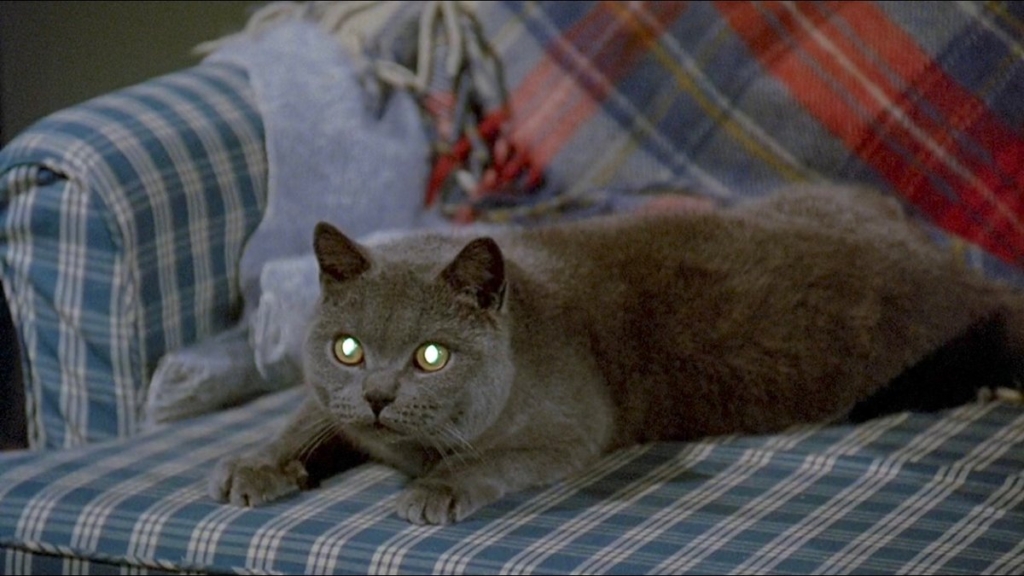 Stephen King is a master of horror and sometimes uses real life situations as inspiration for his novels. After his daughters’ cat, Smuckey was hit on the highway, Stephen wrote Pet Sematary. Smuckey would go on to have his own gravestone in the Pet Sematary in both the novel and the movie.

Church would go on to be the cat’s family in the film, a British Shorthair. Church starts off as a nice cat, but once he is killed and brought back from the semetary, he becomes one of the film’s antagonists, killing any small animal in his path and eventually setting his sights on humans. 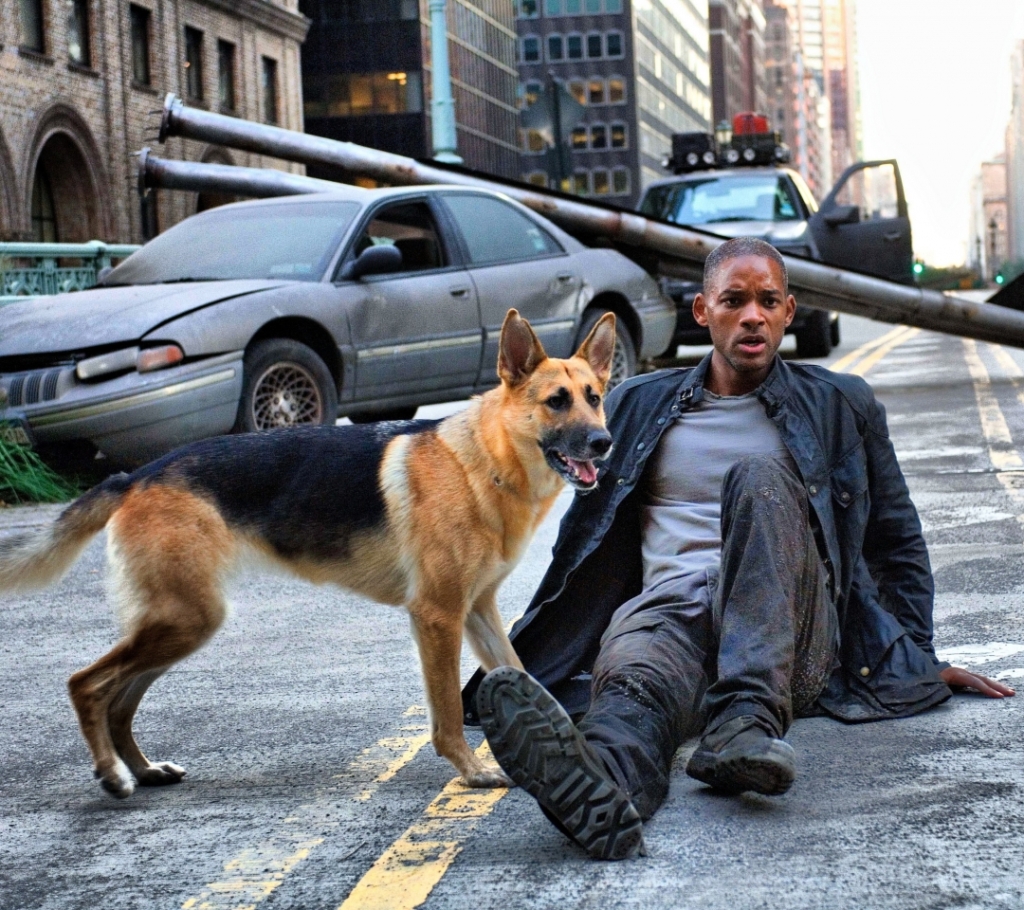 Sam is a German Sheppard whose real name is Abbey. Will Smith loved working with her so much that he wanted to adopt her, but her trainer couldn’t be bought. He had found her at a kennel and only had weeks to train her for the role. To get her to limp in certain scenes, the trainer put a piece of tape under her foot, making her off balanced.

Will Smith knew he would be spending a lot of time with his co-star and decided to go on special “dates” with her, so they could get to know one another. We all cried during that unforgivable scene where Sam dies, and it was even voted as “One of the saddest film scenes of all time.” These two made the perfect team, and we all wanted a better outcome for them.

Before we get to our number one film on the list, let’s take a look at some important Honorable Mentions: Nanook (The Lost Boys), Chico (Secret Window), Abby (Paranormal Activity 2), Sherman (Shark Night). 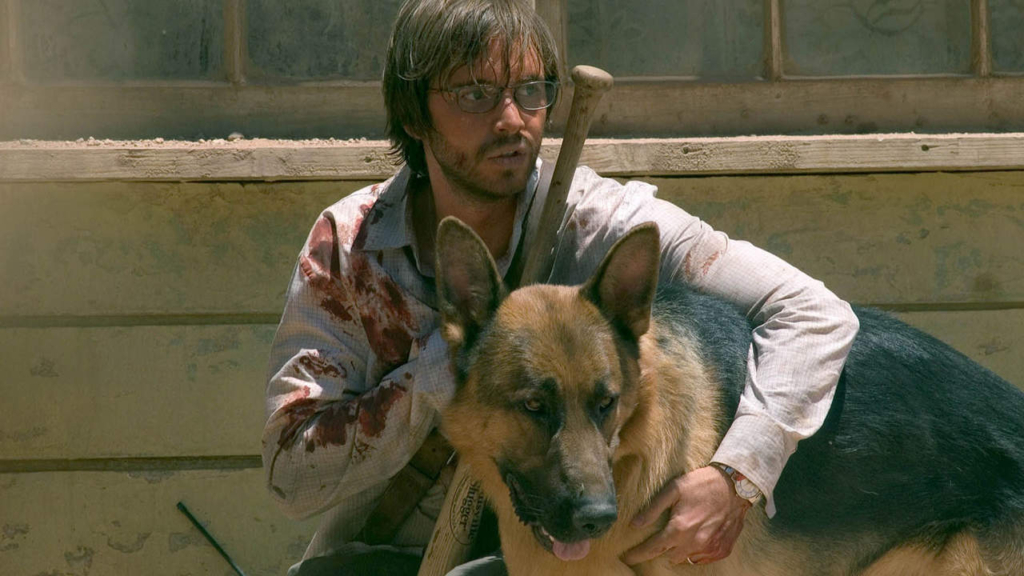 There is no arguing the number one spot should go to Beast from The Hills Have Eyes in the 2006 remake. In the original film, Beast also helps quite a lot, but the remake is where Beast really shines. The German Sheppard stars along side Aaron Stanford and helps him rescue baby Catherine from the horrible, mutated cannibals. After the death of his partner, Beauty, Beast seeks out revenge and takes matters into his own paws. We all cheered on the big animal as he took down many of their attackers in a gruesome fashion.

Thank you once again for reading my newest top ten! Who’s your favorite horror pet and who did I miss that should have been on the list?