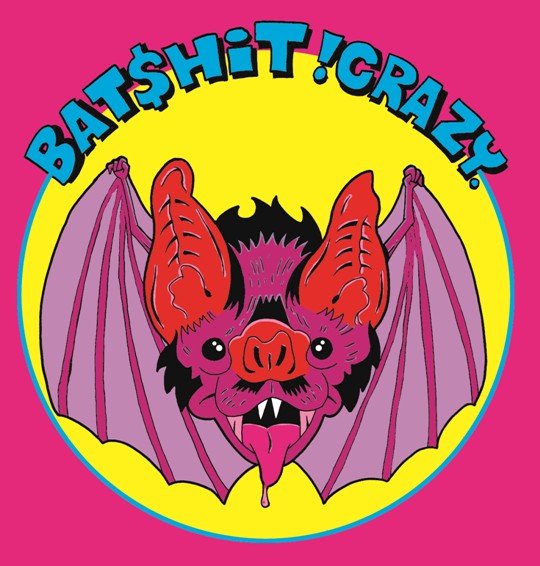 Bat$hit!crazy. delivers a fresh and somewhat infectious mainstream punk pop style, with lyrics inspired by horror influences — giving the songs a much more morbid undertone. The harmonious chorus of the first LP’s opening track Bats in the Belfry, for instance, is a melodic anthem, but the lyrics of the chorus “We’re gonna burn him down, down to the ground” depicts a more sinister side than the sound would suggest.

I got a chance to ask band members Chuck D. and Richy V.  a few questions about how they came up with the band name, what makes Bat$hit!crazy. different to the other punk bands, and the future of the band with upcoming EPs and their first album.

INTERVIEW WITH THE MEMBERS OF THE BAND BATSHIT CRAZY 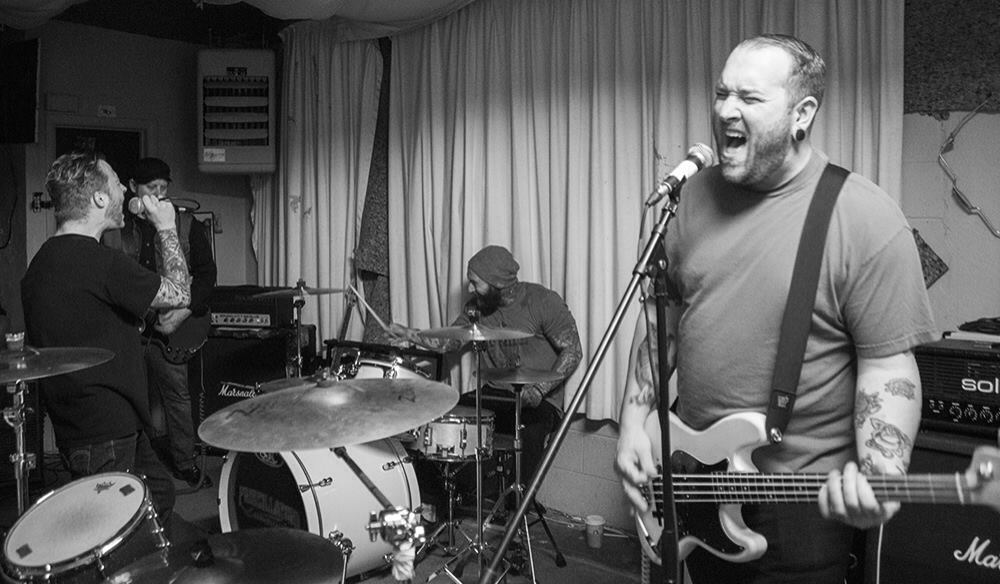 How did you come up with the band’s name Batshit Crazy (Bat$hit!crazy.)?

Chuck: Well, when I started coming up with the idea to do this project, I was throwing around some ideas of the music and the lyrical content. Then I just made up a mock image to attach to some demos I was going to send Richy. I started using some really exuberant colors and thought, “How funny it is that the colors are super cheerful, almost childlike, but the lyrics should be really dark and sinister?” And for whatever reason, it just popped in my head that this was Batshit Crazy!

I had mentioned that saying to my wife, and she had never heard it before. Later that night she was watching I think, Longmire (2012-2017) or something, and they said it in the show. That’s where I got the idea of looking up clips of people saying it and using them on the Instagram page. At that point it just stuck and was a no brainer.

Where is the band Batshit Crazy based? 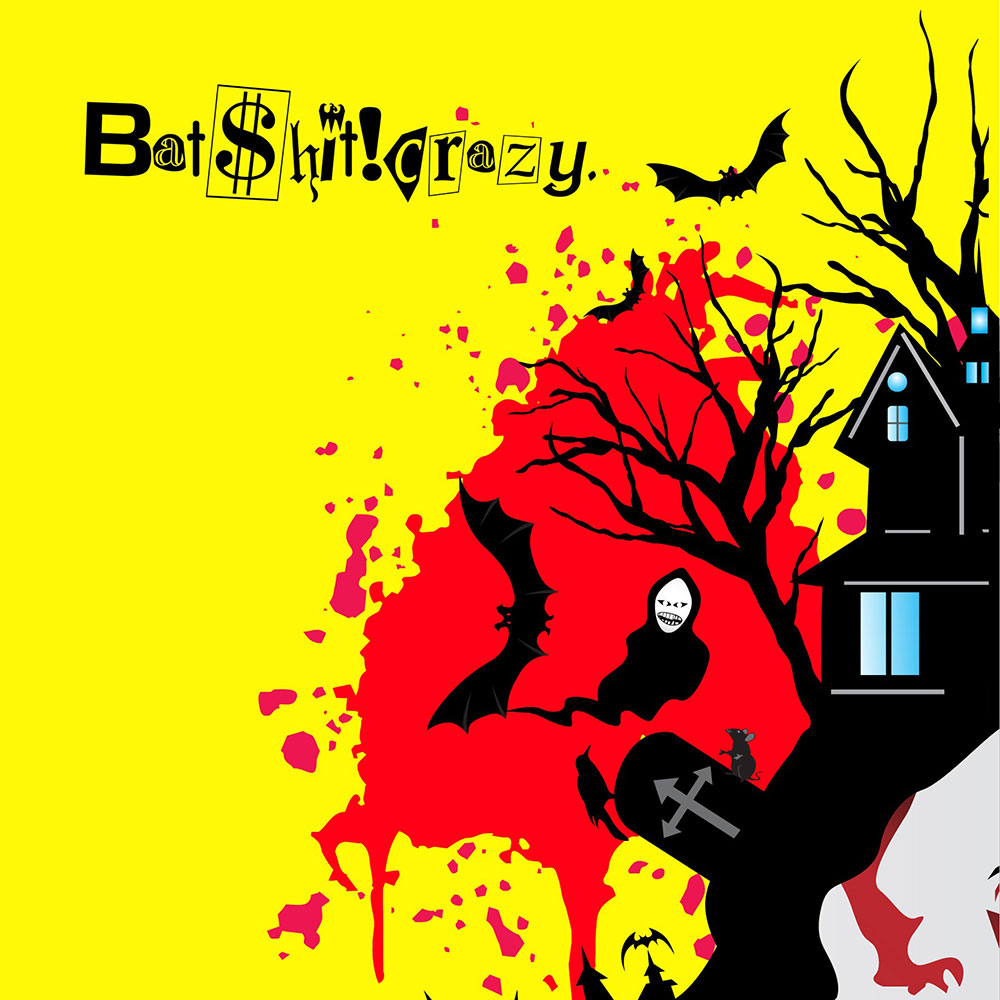 The artwork on the EPs are specifically designed to connect together to create one final image. Who came up with the original design?

Chuck: I did, actually. In this day and age of everything being available online within hours of the final mix, the plan was to just release a couple of EPs. But the idea of doing a full album, however, is still something I am personally attached to. So, to keep up with the times of just putting music out and keeping with the album concept, I decided to make sure people understood that, after all the EPs are released, they should revisit all of them and listen to the music within the context of a full release.

In doing so, I also figured the artwork would be a constant reminder. So, if you are listening to EP.2 and only see a portion of the cover art, maybe it will remind you there is more to the band than just those few songs. It’s a way to both be current and classic! Plus, we will throw in a bonus or two for the complete release and have a little surprise, too. 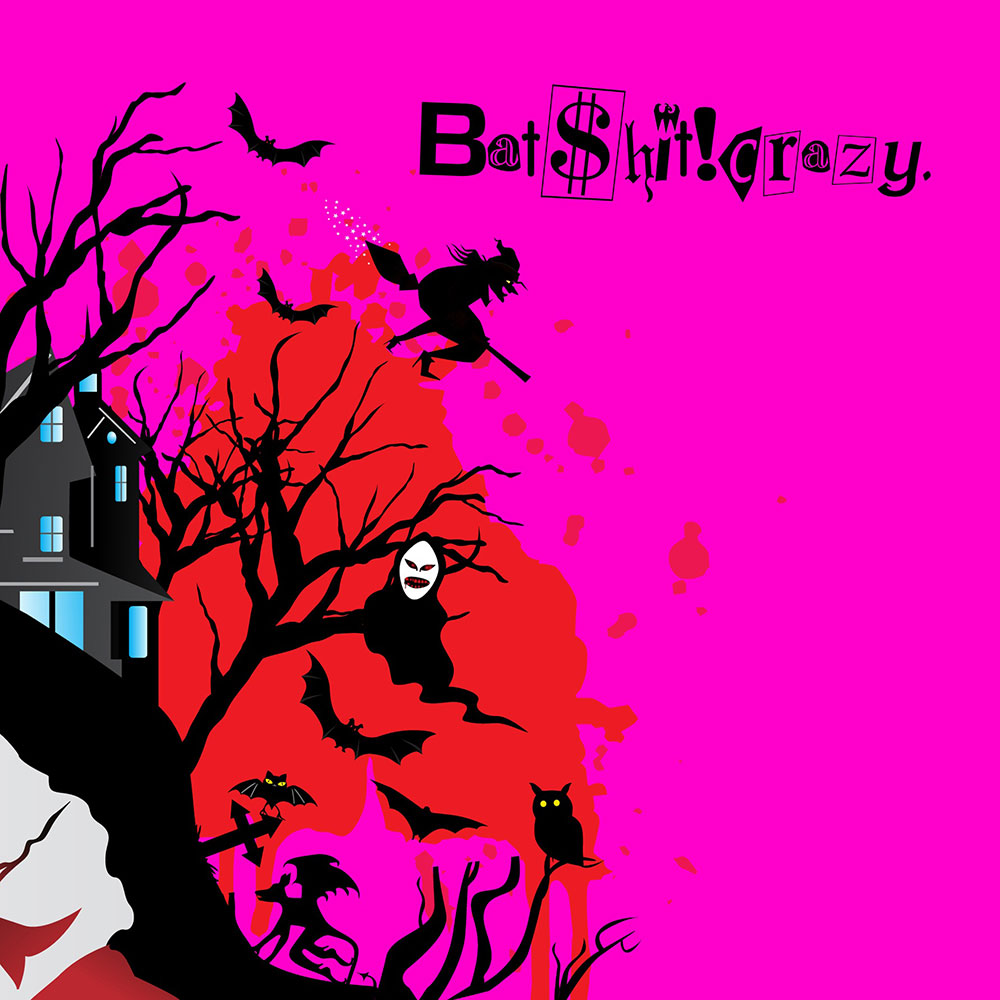 How would you describe the music of Batshit Crazy?

Chuck: It’s definitely punk rock but occasionally drifts between rock, pop, & hardcore. I’ve mentioned before that I think of the music like a horror movie. You can’t just have scare after scare, otherwise it gets old. I approach the music in a similar fashion that maybe a verse could be intense, but the chorus is catchy.

Richy really is a key to the sound of the band, as his voice can venture into just about any style that I write. For instance, if you hear a song like Bats In The Belfy, it’s really more a sing-a-long. But then put on the song Diabolic — the dynamics in his delivery are just amazing! I really lucked out having him come on board for this.

Richy: If you want a simple answer, one reviewer said a fusion of Black Flag, Screeching Weasel, Alkaline Trio & the Misfits, and that’s a pretty good description (Laughs). 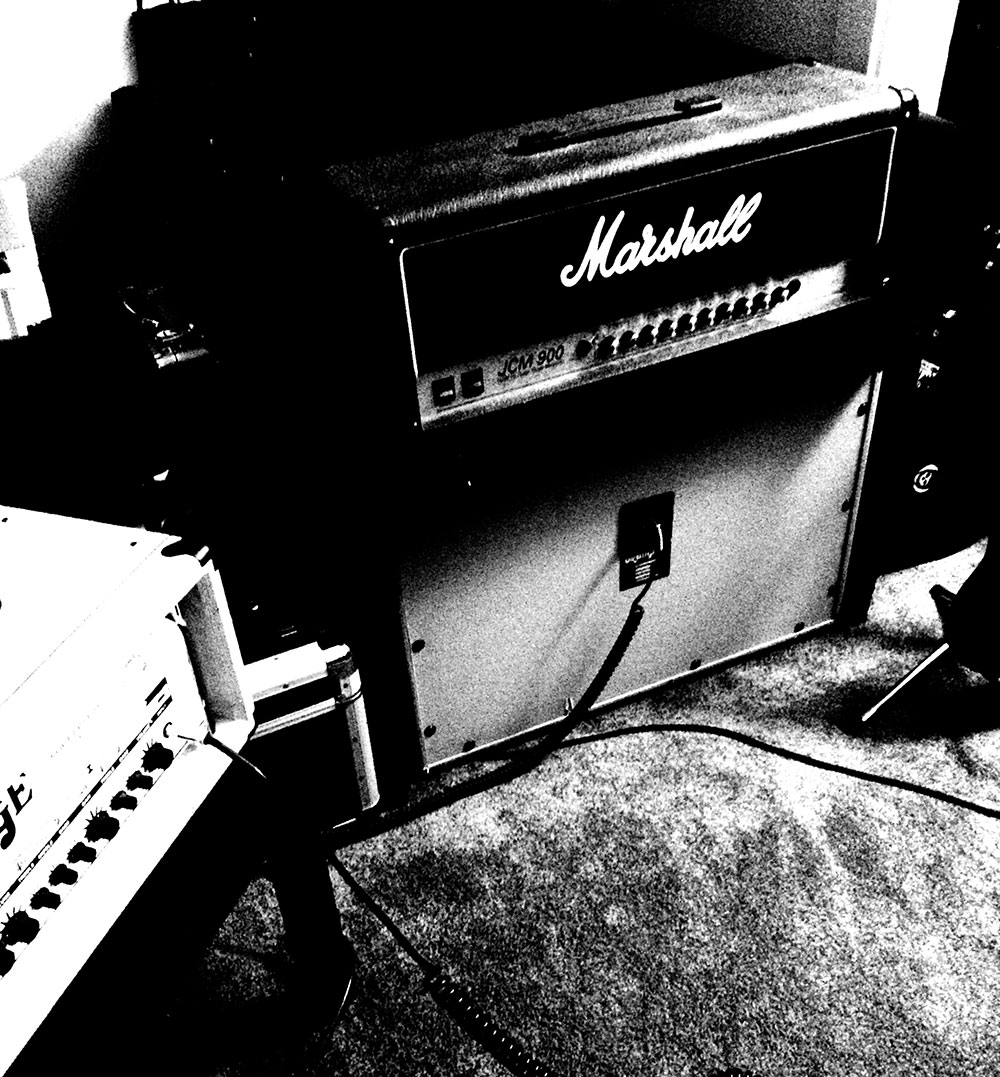 Are there plans for a Batshit Crazy tour?

Richy: No plans right now. We are crazy busy with everything else life throws at us. But that’s not to say if the right situation presented itself we wouldn’t consider getting out there.

Richy: Well, we don’t necessarily dress the part, nor do we have any interest in doing so. Nothing against the bands that do, but it just seems like too much work and we are really lazy in that department (Laughs).

Chuck: Yeah, I agree with that. A lot of horror bands go to the full extent of a show, where we are a little more specific about your listening enjoyment. In fact, if you watch some of the videos we have posted, that is why I use the visuals I do for a listener to attach that visual to the music and not us. 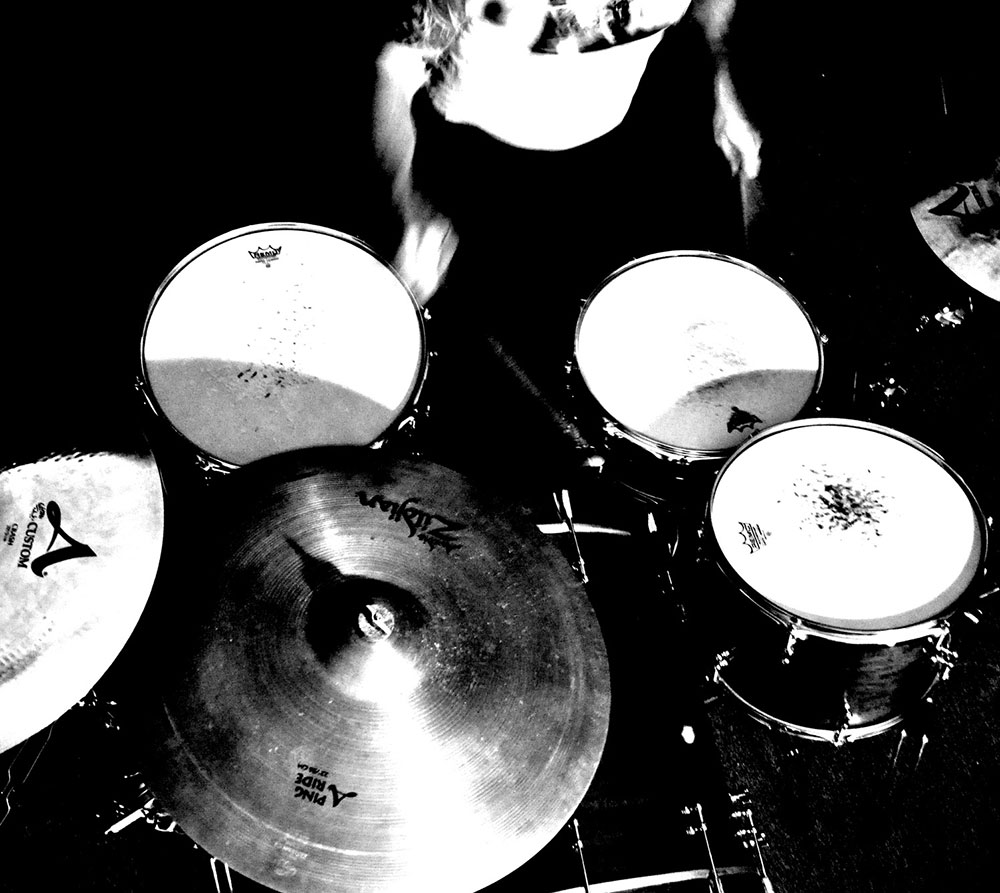 But I do think one other thing that makes us different is a lot of horror bands do try to be different, and we are in a scenario where we are not trying to cut out our own avenue, we are just riding right down the middle of the road. We wear our heart on our sleeve so to speak. I mean listen to “They Live, We Sleep”. That song wasn’t written with the intention of someone trying to find a meaning. That song is based on John Carpenter’s classic film, period! (laughs. So in that sense, being so direct might be what makes us different…or does that sound too ‘Batshit Crazy?’ (laughs)

There are two more EPs to come. Do you know when these will be released?

Richy: We hope to have the third one out in about two months and the last one shortly thereafter. Then we will at some point in early 2019 have the full release we mentioned earlier.

Chuck: We would love to find a label to release it on vinyl. I have a couple crazy ideas for a vinyl release. One of which would blow people’s minds (Laughs), so we’ll see about the physical release around then. 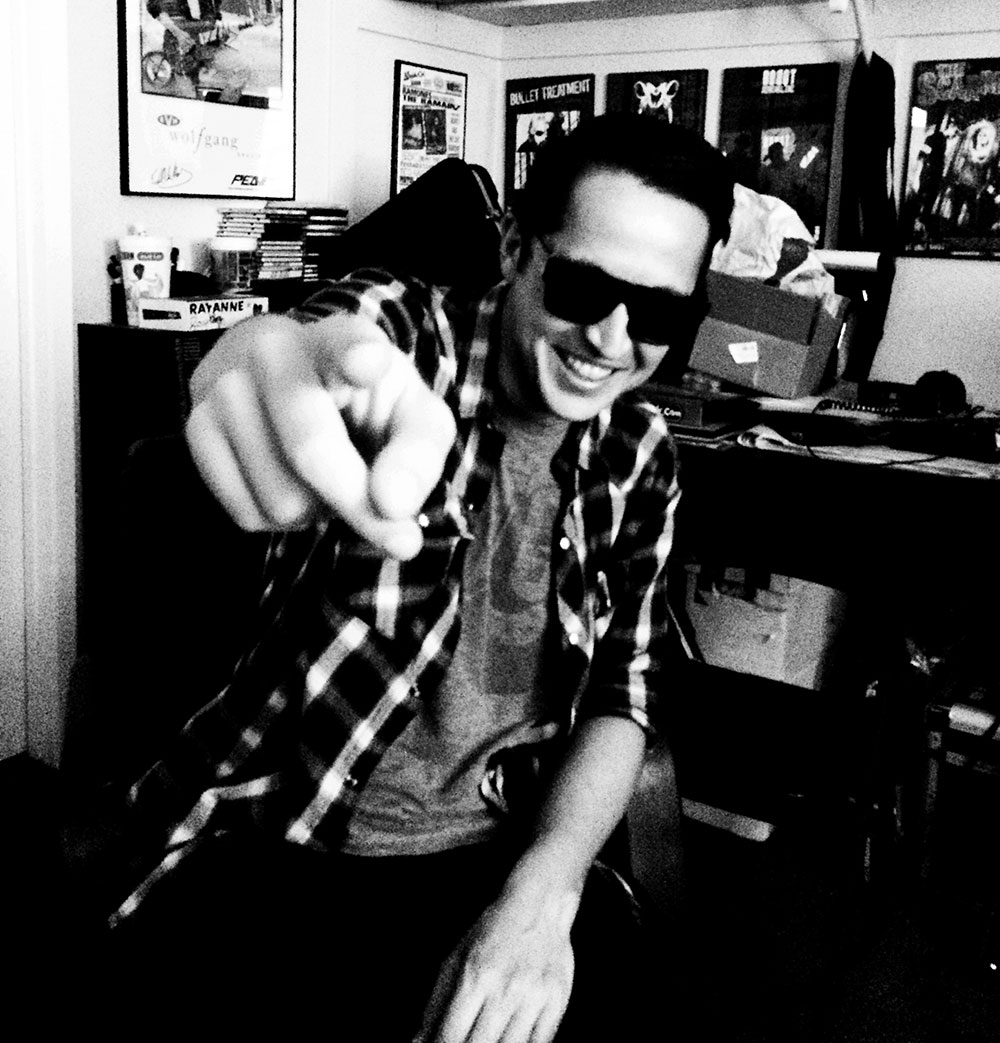 If each member of the group had to choose one film each for a horror movie marathon, what would they choose?

Chuck: Wow, great question…and actually we should do this sometime. I would have to choose either the original Halloween (1978), because it’s a classic and I love all things John Carpenter, or the first Phantasm (1979). Both movies were such an impact on me as a kid. I guess I’ll go with Phantasm. And I know Mike would pick Friday the 13th Part IV (1986). We’ve had long talks over which Friday the 13th is the best, and we both agree it is Part IV.

Richy: For me, I’m going to go a little more ‘new school’ and pick From Dusk Till Dawn (1996). I fucking love that movie. It’s essentially a [Quentin] Tarantino movie with Vampires and has Tom Savini in it. Pretty sure he designed the vampires too, which is why they look so fucking cool!

Chuck: What do you think Jason would pick?

Bats in the Belfry

Opening with the sound of bells ringing in the tower which is probably the most tranquil moment of the first LP before being disrupted by the fast-infectious guitar riff and a beating drum. It is a great opening track to the album which highlights the ability of lead singer Richy ability to shout and sing throughout the song which is met with a harmonious combined melody in the chorus. An impressive opening anthem to entice you in.

They Live. We Sleep

A tribute to John Carpenter’s They Live (1988) which is acknowledged in the music video. Opening with a heavier punk rock guitar and throat ripping vocals from Richy, this is a song which kicks in with an aggressive tone and is maintained throughout.

Taking a slightly darker feel with the song whilst still maintaining the melodic catchy sound. Diabolic once against builds up the momentum before spiralling down with an unexpected change of pace halfway through, before the sound is escalated up again with an excellent guitar solo.

Such a Waste of Good Suffering

The 2nd LP opens up again with bigger sound and production with Such a Waste of Good Suffering. A fast-paced song with its anthem style chorus and guitar solo, there is so much energy to the song, you can’t help but feel is would be the perfect song for a live performance.

A Short, aggressive punk sound that packs a real punch in under a minute and also serves as a fitting tribute to Angus Scrimm who played the Tall man in the Phantasm series. Phantasm: Ravager (2017) being his final film in the series before his death.

Finished the 2nd LP on a high with my favourite song Rotting, thanks to the lyrics which have an unforgiving vengeful tone, against an upbeat tempo sound which gives it a sense of euphoria. A melodic yet old school punk feel, which really showcases Richy’s abilities with the raw aggressive vocals of the verse, to the softer euphony of the chorus.

You can find out more about Batshit Crazy on:

You can also download their music on iTunes, Spotify and Amazon.