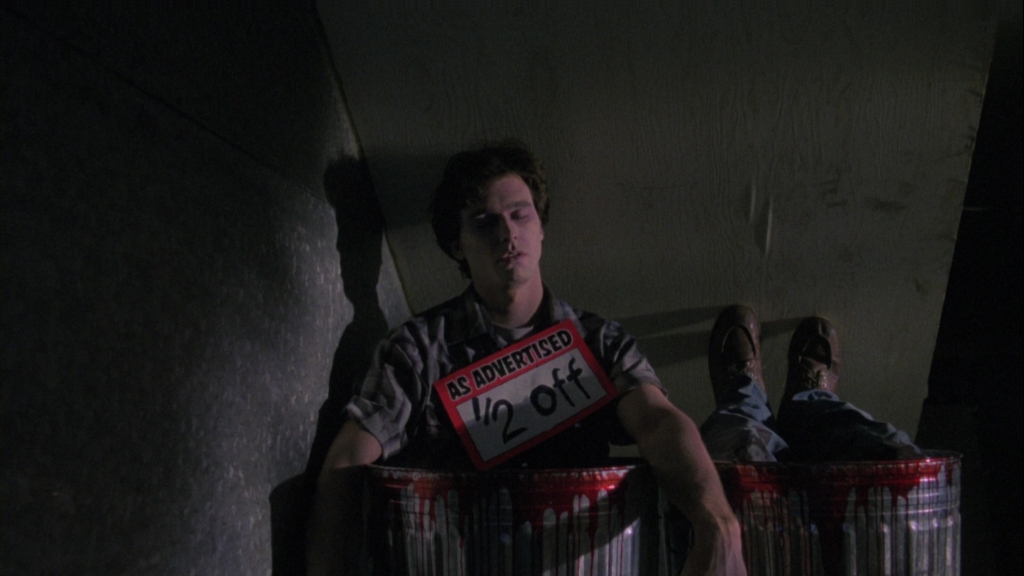 As horror fans, we all have our preferences. Some sit down to watch a movie and see that A24 title card and get excited, knowing they are going to be seeing an artistic masterpiece that defies conventions. Me? I get excited when I see the blue moon rising of Full Moon Productions, knowing I am going to be seeing a direct to video schlock fest. This week’s Tubi Tuesday suggestion, Intruder, is no different.

Set in a local grocery store in the suburbs of Michigan, 1989’s Intruder follows a group of night shifters. They’re stocking the shelves, lowering the prices by 50% in lieu of a going out of business, and, oh yeah, being sawed in half by a maniac killer lurking around the aisles and in the dairy cooler.

Low budget films like this always have the best bizarre dialogue. 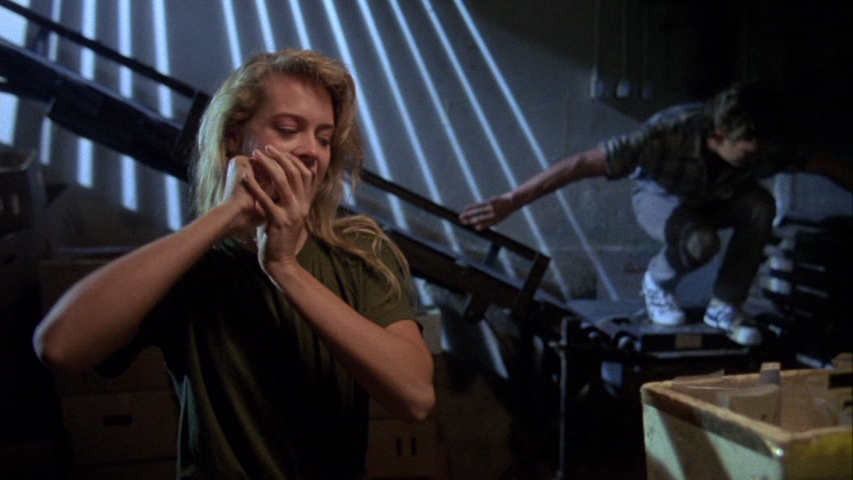 For instance, the suspected maniac killer is Jennifer’s leather jacket-wearing ex-boyfriend Craig, He once almost beat a guy to death, and would have if he wasn’t stopped by a good Samaritan hitting him in the head 14 times with a blender. A Hamilton Beach blender to be exact. And the co-owner has a shipment of baked beans that he is going to make a “fart tower” with. You don’t get this kind of dialogue in an A24 film, or any modern horror film for that matter, and it’s truly a shame.

The who, what, when, where and why in this movie are irrelevant. The main focus is the how.

How the maniac killer disposes of his victims is the ultimate highlight of this movie. 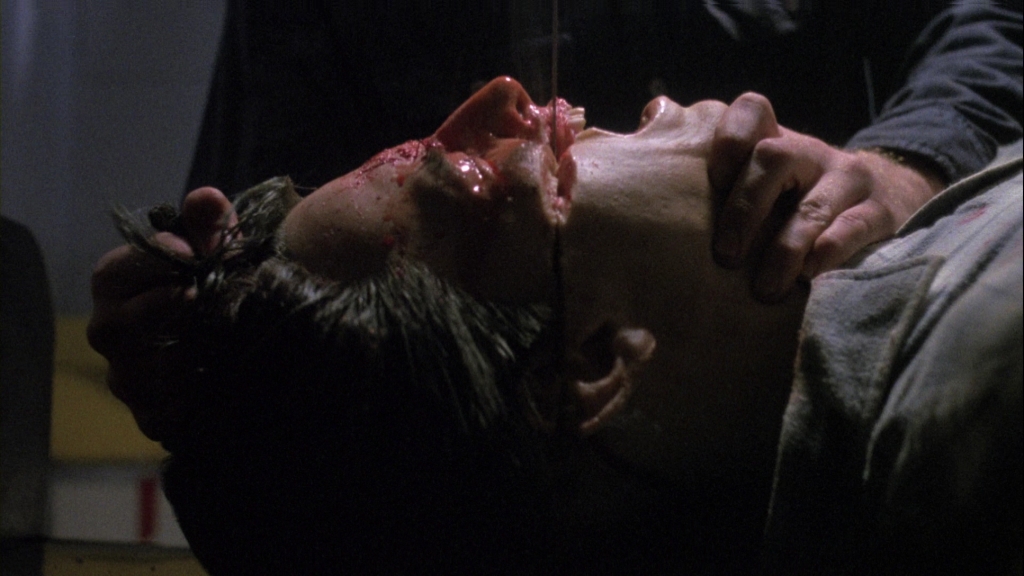 We get a meat cleaver to the face, a person being sawn in half, another being hung on a meat hook, and someone crushed in a compactor. But my favorite, and most gruesome, was the poor victim who got his face sawn in half by a deli slicer.

The special effects in this film are absolutely spectacular. The deli saw face slicing in particular is mind blowing. It truly looks like a human head being sawed, and it’s quite disturbing.

Other than the special effects team, the true standout is the cinematography — driven by the artistic vision of writer/director Scott Spiegel. 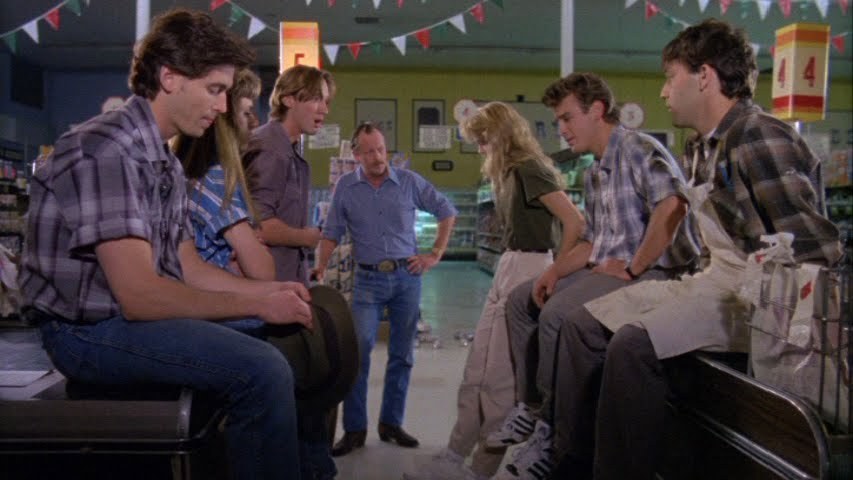 Spiegel who was the co-writer for Evil Dead 2, and you can certainly see some of that horror comedy shine through in Intruder.

Interesting filming angles truly give that creep factor, as does Spiegel’s decision to avoid showing who the killer is. This keeps you guessing until the very end. He also manages to make the most of such a mundane setting, effectively contrasting the tedium of a late night grocery store shift with the terror of being stalked by a mysterious mad man. For this, Spiegel was able to pull from his own real life experiences as a former employee of the real life Walnut Lake Market in the suburbs of Detroit.

Intruder is a unique and often overlooked late 80s slasher. 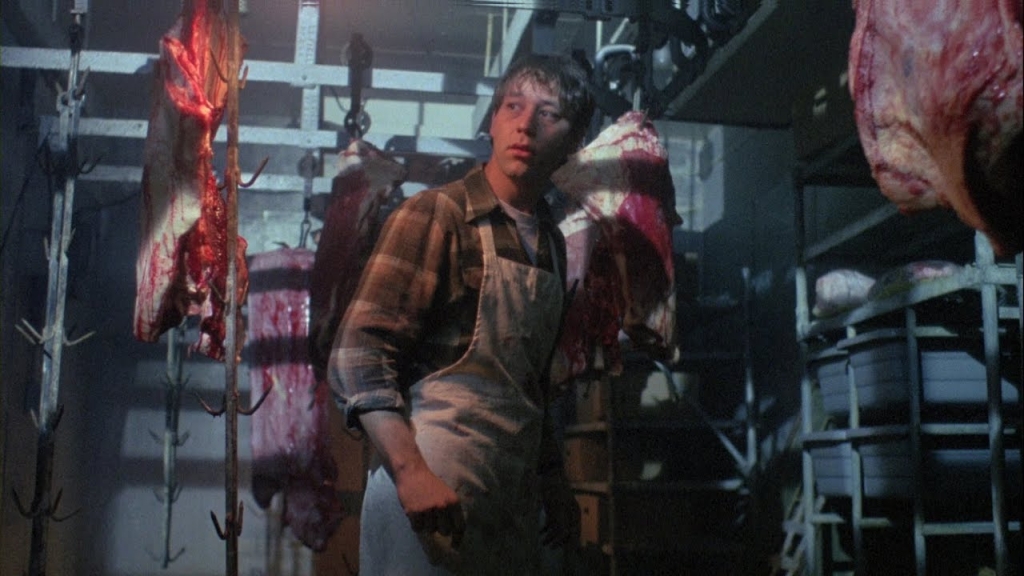 The film was produced by Sam Raimi and features a cameo by Sam, as well as his favorite leading man, Bruce Campbell. This alone, and the connection to Full Moon, should have planted this perfectly on everyone’s radar. But for some reason, it never quite got the love and attention it deserved. I’m not sure why, because this film is filled with fantastic kills, a couple of absurd fight scenes, and enough shots from the killer’s POV — complete with heavy breathing — to ratchet up the creep factor.

Intruder is a must watch 80s horror gem. So if you’re tired of the standard slasher films and are looking for something new and interesting to watch this week, you can watch Intruder for free on Tubi.