Video Rewind tells the stories behind forgotten VHS favorites from the video store era, one rental at a time! This month’s movie is 1992’s “Kuffs”. 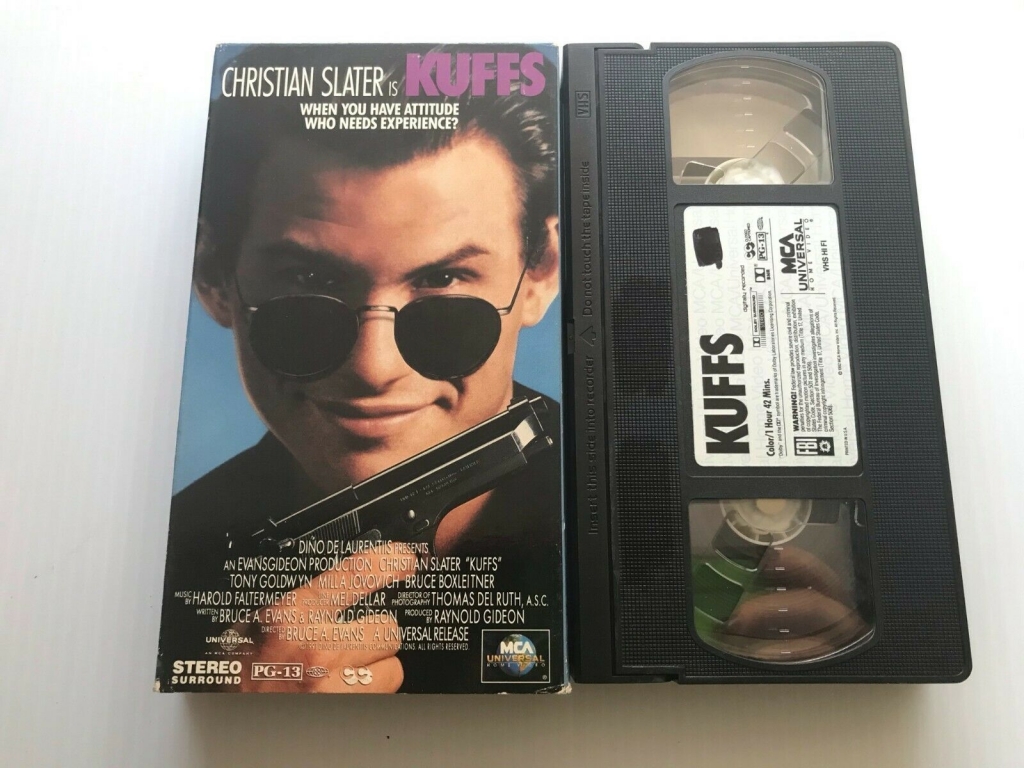 The city of San Francisco took an interesting approach to law enforcement in 1851. Unable to afford enough policemen to adequately protect its population, the city chose to divide into different districts, with these districts then being sold to private citizens. Merchants and businesses could pay these district owners, known as Patrol Specials, for their service of protection. This practice continues in the city to this day.

And in 1992, script writers Bruce A. Evans and Raynold Gideon found a way to incorporate this unique law enforcement technique into a movie: an action-comedy with Hollywood’s hottest young star, Christian Slater.

Kuffs would be the directorial debut of Bruce A. Evans, who, to date, has directed only one other feature since, 2007’s solid crime-thriller Mr. Brooks starring Kevin Costner. Evans did have a couple of strong writing credits to his name at the time Kuffs was announced. Along with his writing partner Raynold Gideon, Evans wrote John Carpenter’s Starman in 1984, and the coming of age classic Stand by Me in 1985.

Evans and Gideon wrote the script for Kuffs (originally titled Gun For Hire), and it was Evans’ 17 year old daughter who suggested the young lead character have an attitude. 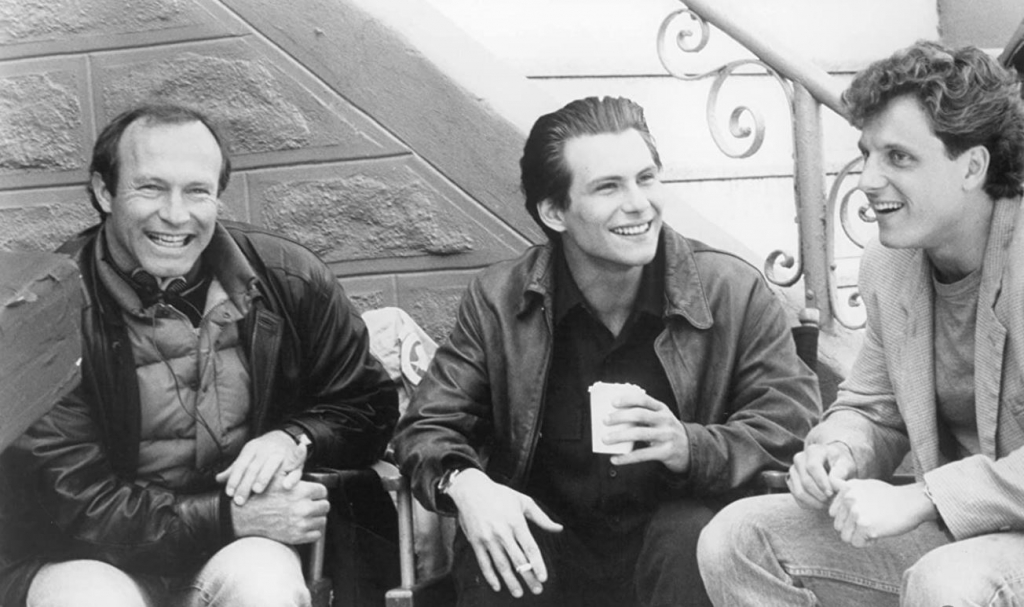 This suggestion ended up playing a major role in the story and character of George Kuffs (“When You Have Attitude Who Needs Experience?” reads the film’s tag line). Evans, Gideon, and producer Dino de Laurentiis were sold on Slater after seeing him in Pump Up the Volume and knew he’d be perfect for the role in Kuffs. The filmmakers waited several months for the busy star to complete work on 3 prior films just to get him.

Kuffs opens with a leggy, underwear wearing Milla Jovovich dancing with a shirtless Christian Slater, when she suddenly drops the news that she’s pregnant. Although playing the pregnant, college age girlfriend to Slater’s George Kuffs, Jovovich was only 15 when filming on Kuffs took place (Gwyneth Paltrow, Sandra Bullock, and Ashley Judd also auditioned for the role).

Jovovich signed her first modeling contract at the age of 12, and the Ukrainian beauty caught Hollywood’s attention in Return to the Blue Lagoon, despite the film being a box office bomb. Her big break came in 1997 starring opposite Bruce Willis as the orange-haired Leeloo in the sci-fi-action bonanza The Fifth Element (multi-pass!).

Jovovich’s future seemed undeniably as bright as her beauty, and by the end of the decade she was one of the hottest actresses in Hollywood. 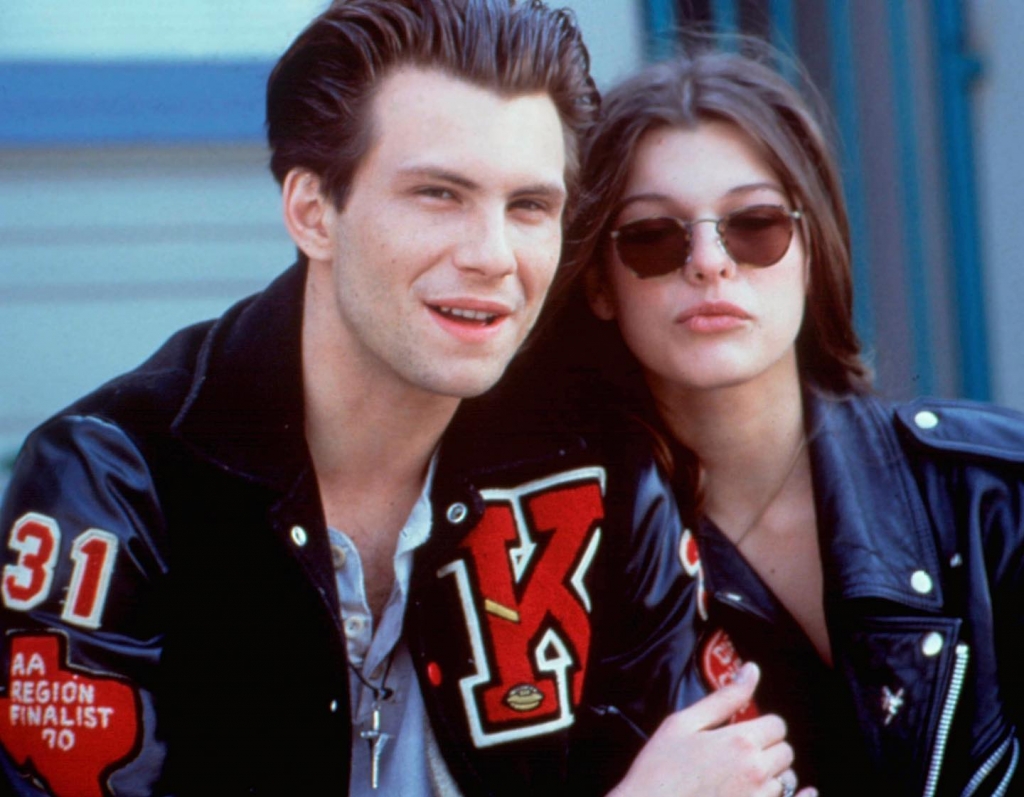 Perhaps Jovovich’s beauty was so bright that Christian Slater had to wear shades while dancing with her in that opening scene.

Always channeling Jack Nicholson with his shades, slicked back hair, wide grin and arched eyebrows (all on prominent display in the film’s poster), Slater looks to the camera to tell the audience that there’s no way he can take care of a baby. After all, him and Maya have only been together for 6 months and, besides, “I have women to do, places to see,” George says directly to the camera, adding, “she’s better off without me.”

(Keep an eye out for Ashley Judd in the following scene in her feature film debut. The filmmakers liked her audition so much that they added a small role for her as a paint store employee, a role that earned her a Screen Actors Guild card).

George decides to tell Maya his intentions to leave her and the baby in a note (a dick move, but why ruin a moment like Jovovich dancing in her underwear?). But after having dinner with his brother Brad, a Patrol Special district owner, on his birthday (and hitting Brad up for money), George thinks better of the note and decides to call Maya instead. As he approaches the pay phone to dial her number, George hears gunshots behind him and sees a man standing over his brother, who has now been shot dead.

George identifies the man later in a lineup, a man named Kane (Leon Rippy). But because George didn’t actually see Kane pull the trigger, the suspect is able to walk free. Unbeknownst to George, Brad left him in charge of his district in the event of his death. It’s a surprising revelation to George, who went from being unemployed to being a Patrol Special in a matter of hours. Suddenly George finds himself in quite a responsible position, being in charge of keeping the people of his brother’s district safe.

Viewers don’t see much of George Kuffs before he hears the news of Maya’s pregnancy and then witnesses his brother’s death. We’re supposed to believe that George is a live-in-the-moment kind of guy, a well meaning but irresponsible dreamer looking to dodge the 9-5 grind and instead hit that “one big score” so he can retire. His talk to the camera and declaration of, “women to do, places to see,” after Maya gives him news of the pregnancy is supposed to suffice, telling the audience who he is.

It’s weak character development to say the least, but this is why Slater is the perfect choice to play George Kuffs. 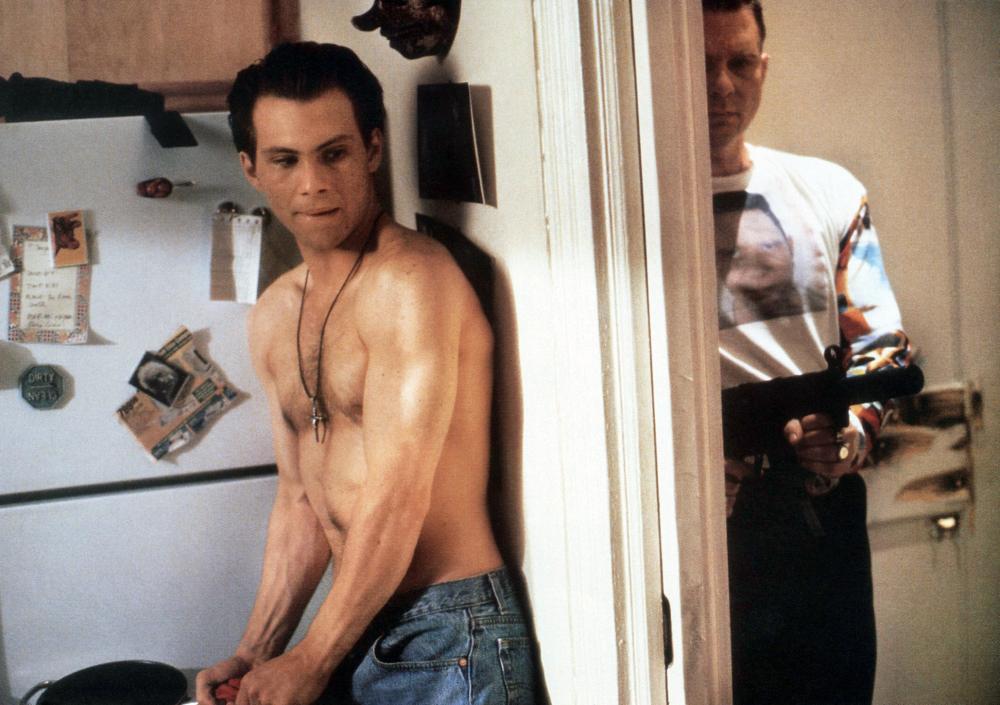 Slater was known to audiences as the bad boy — the young, ‘screw authority’ troublemaker with the wide sarcastic smile and up-to-no-good arched eyebrows. After playing troubled teenage outsiders in Heathers (1989) and Pump Up the Volume (1990), and a 1989 arrest in West Hollywood for evading police and driving under the influence, Slater had the built -n reputation needed to fill in the blanks of who George Kuffs is.

The moment he’s seen dancing with his girlfriend while wearing his shades inside, George is instantly known as a character.

That’s what Slater was capable of, immediate character development simply by being cast. And throwing him into a very adult situation surrounded by authority figures allows the inherent slacker and inner rebel within Slater to shine. Kuffs really is a fish out of water story, and Slater is a fun fish to watch.