Video Rewind tells the stories behind forgotten VHS favorites from the video store era, one rental at a time! This month’s movie is 1994’s “The Shadow”. 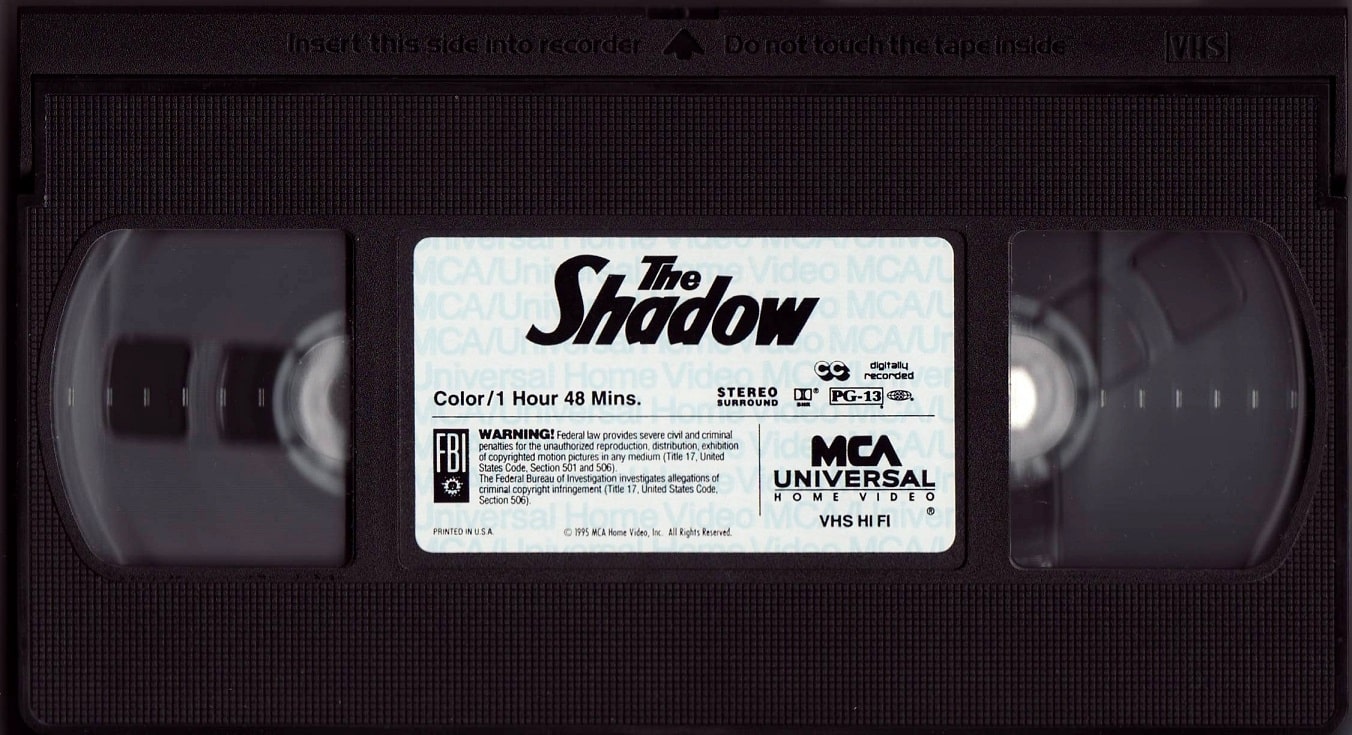 Five years after the release of Batman and two years after Batman Returns, 1994’s The Shadow drew expected comparisons to the caped crusader. With both films being dark stories featuring a wealthy, city dwelling playboy with a crime fighting alter ego, screenwriter David Koepp looked for an angle to differentiate The Shadow from the record breaking Batman films.

He found it in The Shadow‘s tagline: Who Knows What Evil Lurks in the Hearts of Men?

The answer is The Shadow knows, as Koepp explains, “I decided that perhaps it was because he was uncomfortably familiar with the evil in his own heart. Because he’s participated in such evil.” Whereas the Batman character was built around vengeance (avenging the death of his parents), The Shadow would center around redemption for past sins (being a ruthless drug kingpin in East Asia).

The irony of The Shadow being compared to Batman is that artist Bob Kane says he drew inspiration from The Shadow when creating the Batman character in 1939.

The character of The Shadow debuted in the summer of 1930 as part of the Street & Smith’s Detective Story Hour radio program. 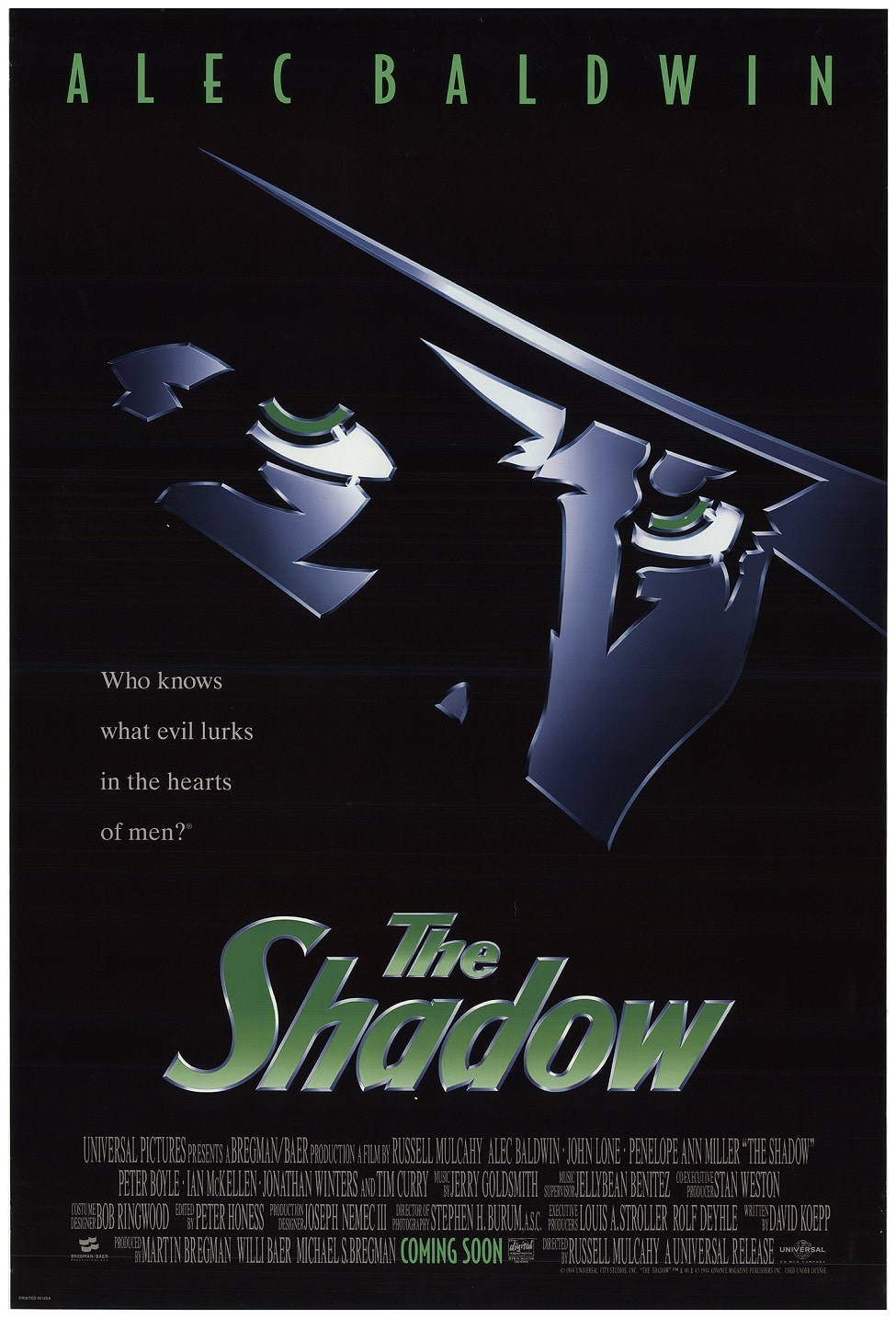 By 1937, The Shadow had grown into its own radio drama, with a 22 year old Orson Welles voicing Lamont Cranston, a young socialite who travels through East Asia and resurfaces in New York City with an invisible, crime fighting alter-ego known as The Shadow with the ability to cloud the minds of men. Welles would leave the show in 1938 to start Mercury Theater on the Air, which in October of that year caused Americans to panic thinking an alien invasion was underway during his legendary broadcast of War of the Worlds.

Over the following 15 years, The Shadow would appear in a hugely successful run of monthly pulp mystery novels as well as comic strips, television shows, and seven feature films. But by the mid 1950s, The Shadow seemed to run its course while Batman continued to thrive in popularity.

However, in Hollywood, no idea or property is ever truly dead.

In 1982 producer Martin Bregman (Serpico, Dog Day Afternoon) bought the rights to The Shadow with the intention of bringing the character back in a new adventure on the big screen. Sam Raimi, whose no budget horror flick The Evil Dead gained enough of a following to justify Evil Dead 2 in 1987, lobbied hard to direct The Shadow. But with the huge success of Back to the Future, director Robert Zemeckis was tapped to direct the adaptation first.

Raimi, aware of the impossibility of out-dueling Zemeckis for the job, decided to move on and make a pulpy, dark anti-hero of his own, 1990’s Darkman starring Liam Neeson. After a couple of years went by without a script that could be agreed upon, Robert Zemeckis eventually left the project, and The Shadow was barely treading water without a director or a proper script.

Enter David Koepp, a screenwriter who, while much too young to remember the original The Shadow radio program, was very familiar with the character and his dark adventures. 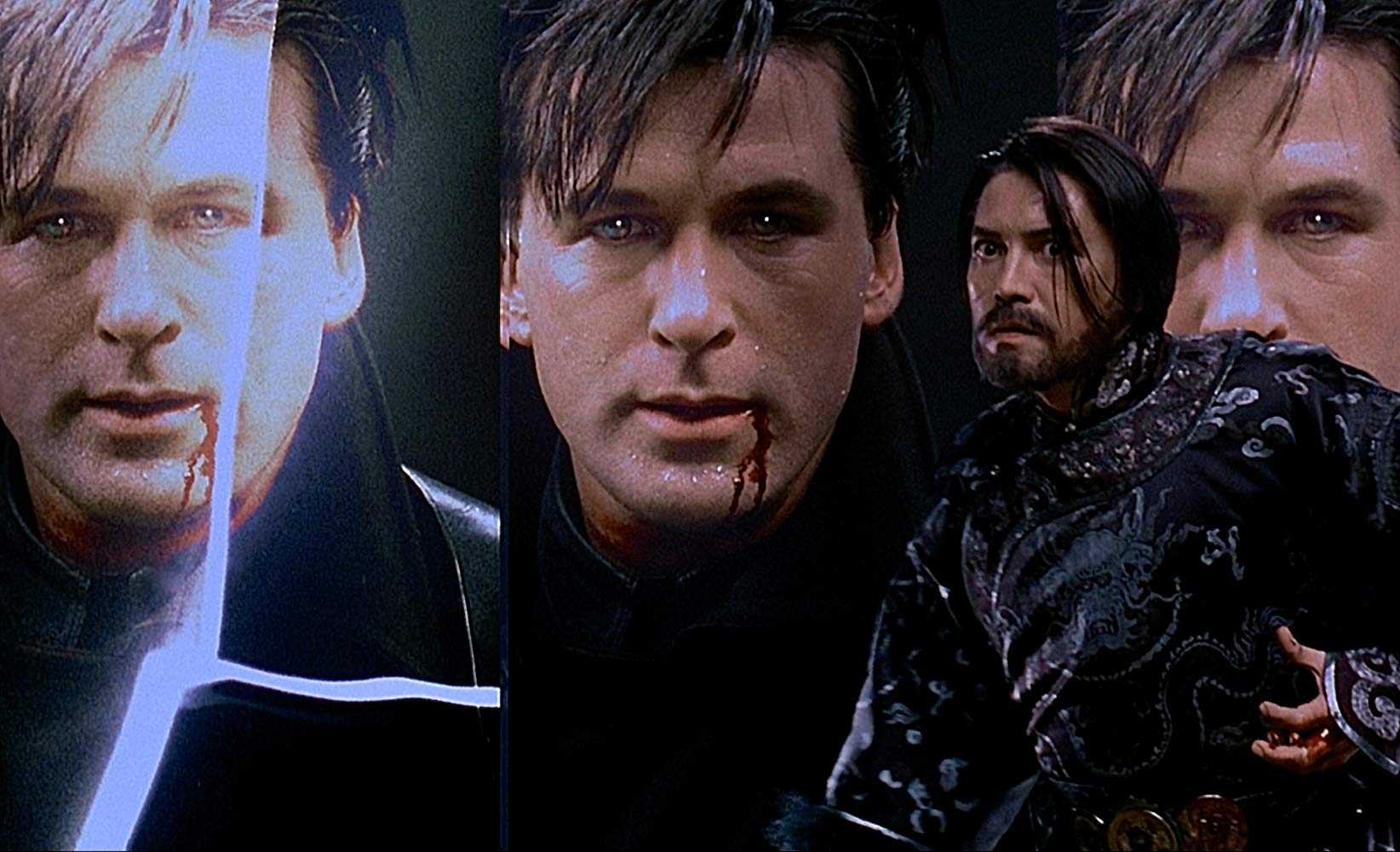 ”I remembered the radio shows from when I was a kid. On Sunday nights, CBS Radio Mystery Theatre, hosted by E.G. Marshall reran The Shadow every Sunday at 10.”

This personal knowledge of the material combined with reading a number of the old pulp novels, allowed Koepp to write a script that properly captured the spirit of the character. “I drew a lot of specifics from the pulp novels, but the tone came from the radio show,” Koepp explains, describing his The Shadow script as “kind of a hybrid.”

The early 1990s were a busy and exciting time for Koepp, who was under a 4 year contract with Universal.

This type of deal was commonplace in the old studio system of the golden age of Hollywood, but hardly the norm in the age of summer blockbusters. Koepp wrote five films in two years, gaining attention with Death Becomes Her starring Bruce Willis, Goldie Hawn, and Meryl Streep, and gaining accolades for the critically praised, box office juggernaut Jurassic Park.

While writing the script for The Shadow, Koepp worked very closely with producer Martin Bregman. “I ran it by him at every stage. He’d been working on this for years, so I had to respect that.”

Koepp had Alec Baldwin in mind the whole time while writing the script. 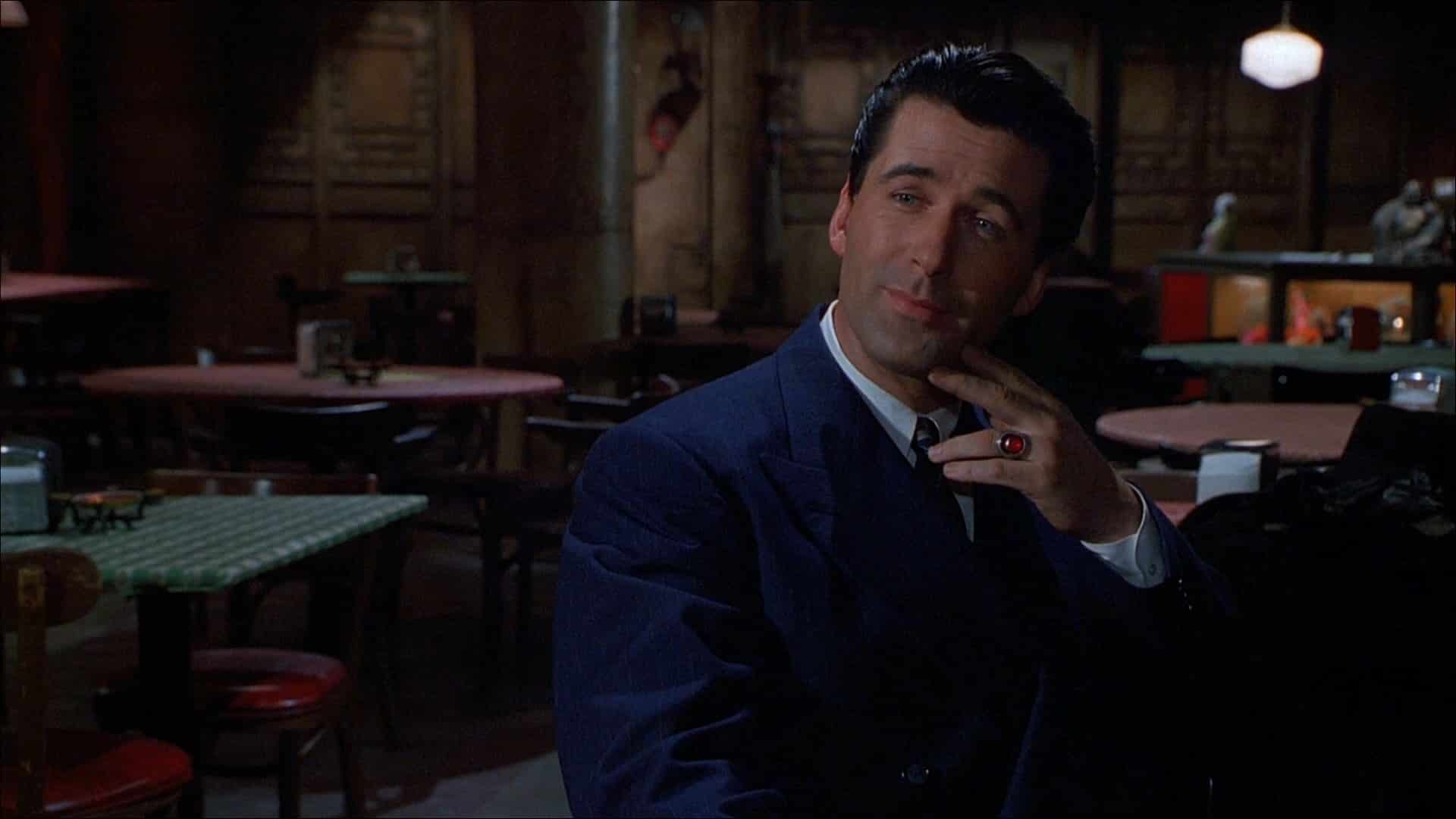 “In addition to being a great actor, he has the eyes and the voice; he had so much of what I pictured Cranston being. And then we were lucky enough to get him.”

Producer Martin Bregman agreed that Baldwin would be perfect for the role of Lamont Cranston and his alter ego, The Shadow.

“I think he’s an old-fashioned movie star. He’s a heroic-looking figure. He’s somebody who looks like he came out of a 1930s film.”

After Beetlejuice (1988) and The Hunt for Red October (1990), Baldwin was recognizable to audiences, if not yet a proven box office star. Still, the actor possesses an unmistakable dashing and mysterious look, making him an inspired choice to play Lamont Cranston.

As for finding the right director, Russell Mulcahy was currently directing Kim Basinger, Baldwin’s wife, in The Real McCoy, a crime-thriller released in 1993. The producer of The Real McCoy was none other than Martin Bregman, and Bregman wanted to work with Mulcahy again and offered him the job to direct The Shadow.

Basinger, who played reporter Vickie Vale in 1989’s Batman, joked with her husband about landing the lead role in The Shadow, saying, “Why would you want to bother doing that? You’re never going to make as much money as we made. We already dominated that category.”

The comparisons to Batman came early and often.