An Interview with Jeff Roland, author of the whimsically illustrated and tenderly written book for kids, “Maury the Miserable Vampire”.

Not long ago I came in contact with Author Jeff Roland, who recently penned the heartwarming (and blood warming) children’s book “Maury the Miserable Vampire”. After reviewing “Maury” for Rue Morgue, I decided to  interview Jeff for this site.

“Maury the Miserable Vampire” can be purchased directly from maurythemiserablevampire.com, where you can request to have it signed upon purchase. You can also order it from Amazon, as well as a growing number of independent brick and mortar book sellers. 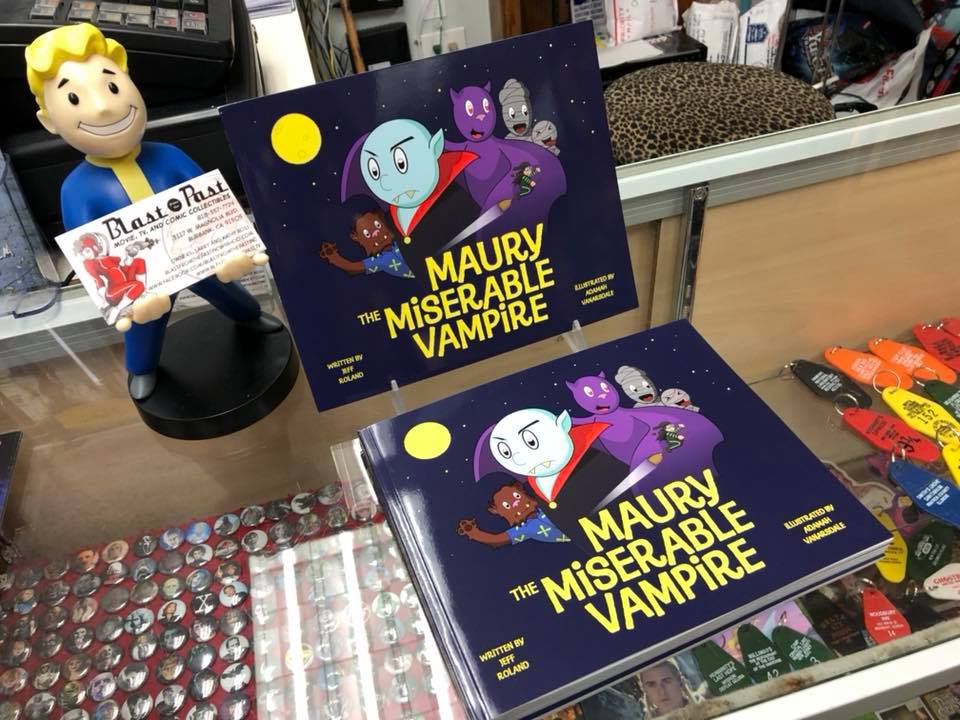 1. Was there a specific catalyst for Maury the Miserable Vampire’s creation? Can you remember a specific moment where a light bulb went on in your head?

Absolutely! About four years ago I was looking at Halloween decorations in a dollar store and came across a really bizarre looking, poorly painted, metal vampire that, for some unknown reason, was giving a “thumbs down” and had a frown on his face. It was so odd and confusing, I instantly fell in love with it. The name “Maury the Miserable Vampire” suddenly popped into my head. I thought, “This is a children’s book!” I came up with his whole story on the drive home. It was one of those rare, joyful, creative moments where everything seemed to fall into place.

As soon as I got home, I leapt in front of the computer and wrote the first five pages.. Then I thought, “Wait a minute. I actually don’t know how to write a children’s book.” I started off writing screenplays and working in script development for many years. It was a completely different style of writing that I had trained myself to do, so I had to strip that away and start from scratch.

Writing this was one of the hardest things I’ve ever worked on. If anyone ever tells you that writing a children’s book is easy, please just send them my way, and I’ll set them straight. 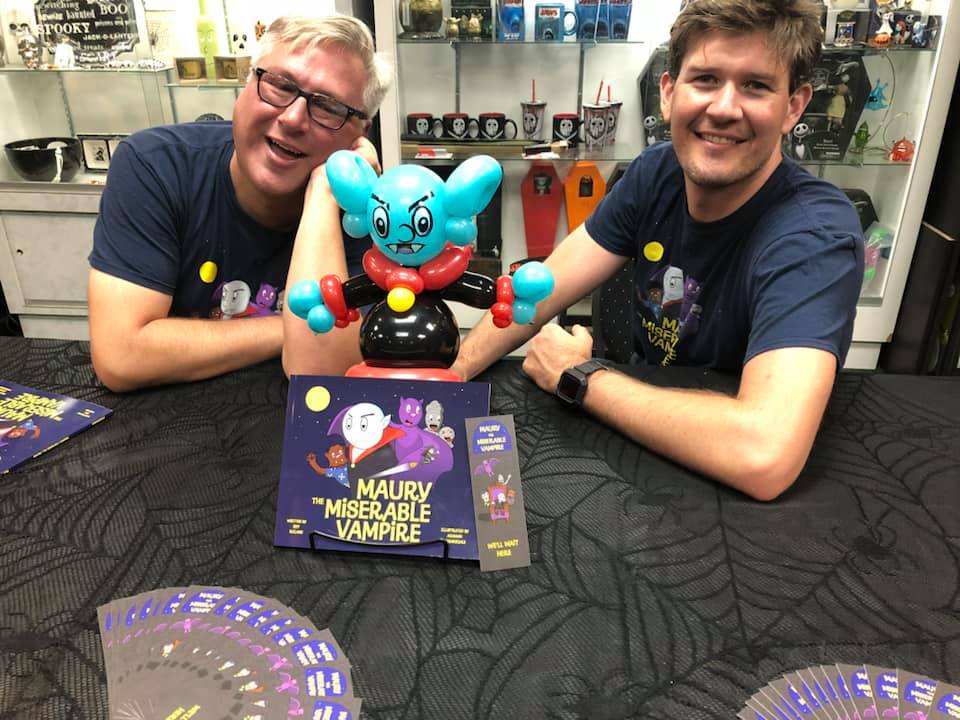 2. How did you end up working with illustrator Adamah VanArsdale? Were you friends before Maury came into the picture?

How we ended up working together is so funny and completely random to me. My fiance had a friend from out of town staying with us, and she suddenly said that she thought she’d heard through a friend of a friend that a guy who she used to work with in Hawaii for a few months had just moved here to Los Angeles. Turned out it was true, those guys went out to dinner together, but I stayed home to watch a new blu ray or something.
I was about to go to bed when the whole dining group came back to our apartment, and suddenly we were having a full-on party.

I was introduced to the random guy who had just moved here, and that was Adamah. My fiance and her friend started yelling, “He’s an artist! Tell him about that vampire kid book thing you want to do!” I told him about it, and he was into it. So he and I watched “Samurai Cop” and talked about horror movies, comics and all that kind of stuff until about 2 am. We started work on the book a few days later. And, a year and a half later, here we are. 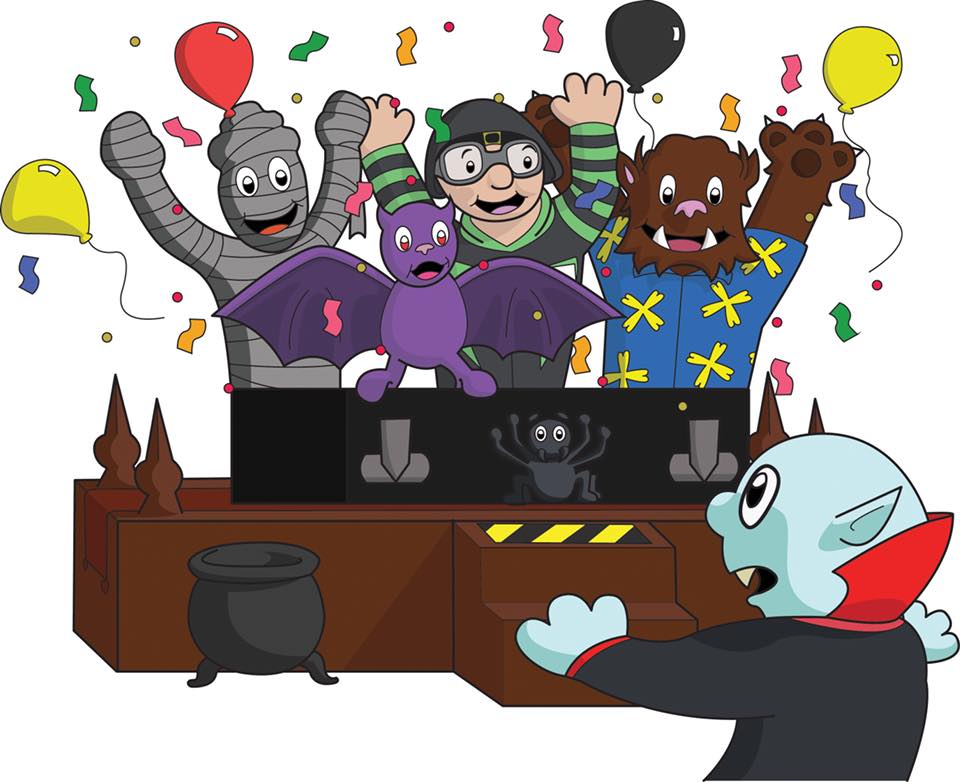 Working with him has been the best. He’s a superb artist who took my whacky ideas and not only knocked them out of the park but came up with takes on them that I hadn’t even considered. I mean, if someone had said to you, “I really want this to be as if Looney Tunes and Peanuts were living inside of a late-60s, early-70s Hammer film”, you’d probably just silently walk away or call for a straight-jacket, right? He just said, “Okay”, and completely nailed it on the first drawing.

But I also know for a fact that the guy could work in any genre and blow your mind. He’s incredibly talented, an amazing collaborator and a great friend. 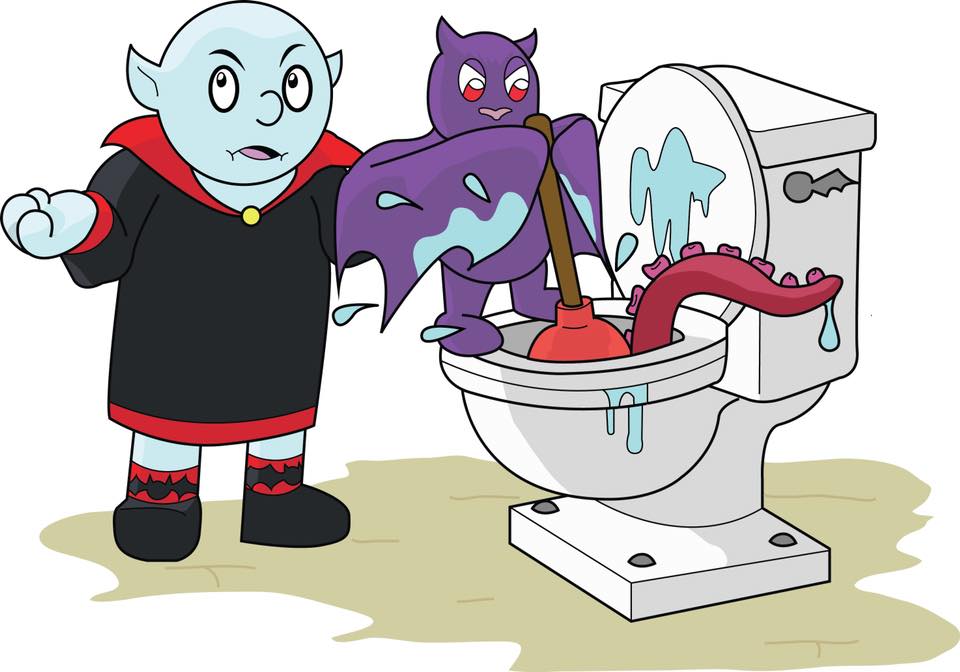 3. What do you attribute to our recurring fascination with the vampire? What is it about vampires that makes them so alluring?

Just to start, I’m obviously not breaking any new psychological ground, but I’ll give it a shot. I took the two required psychology classes at Emerson College, so that’s about the level you’re going to get here.

I think it simply comes down to us identifying our basic human instincts in the vampire — survive for as long as you can.

The prime instinct is, obviously, to survive, right? The vampire doesn’t really have those worries outside of a few random acts that are, most likely, not going to happen. Just avoid Home Depot, churches and the vegetable section at Stop & Shop. That’s pretty much all they have to do, and they live forever. At our most basic level, that’s what we long for, so its admired. So, right there, we’re kind of already on the vampire’s side.

We spend our days worrying about disease, watching what we’re eating, getting old, don’t get hit by that car… the idea of vampirism sounds pretty damn worry-free and ideal! There’s a ton more I can go into, but I’m sure it’ll be things your readers have already thought of. Horror fans like us have had tons of intake and time to ponder these things.

I can tell you though that the one thing that I don’t like about the recent ongoing fascination with vampires is how they’re pretty much portrayed the same way characteristically and have become something of a stereotype to the point where it has become boring. They’re dark, moody, beaten down and all that jazz. We get it. That’s why I keep going back to films like “Lifeforce”, “Martin”, “What We Do in the Shadows”, “From Dusk til Dawn” and “Let the Right One In”. They attempt different takes on the typical vampire genre and are absolutely brilliant in their abnormality. 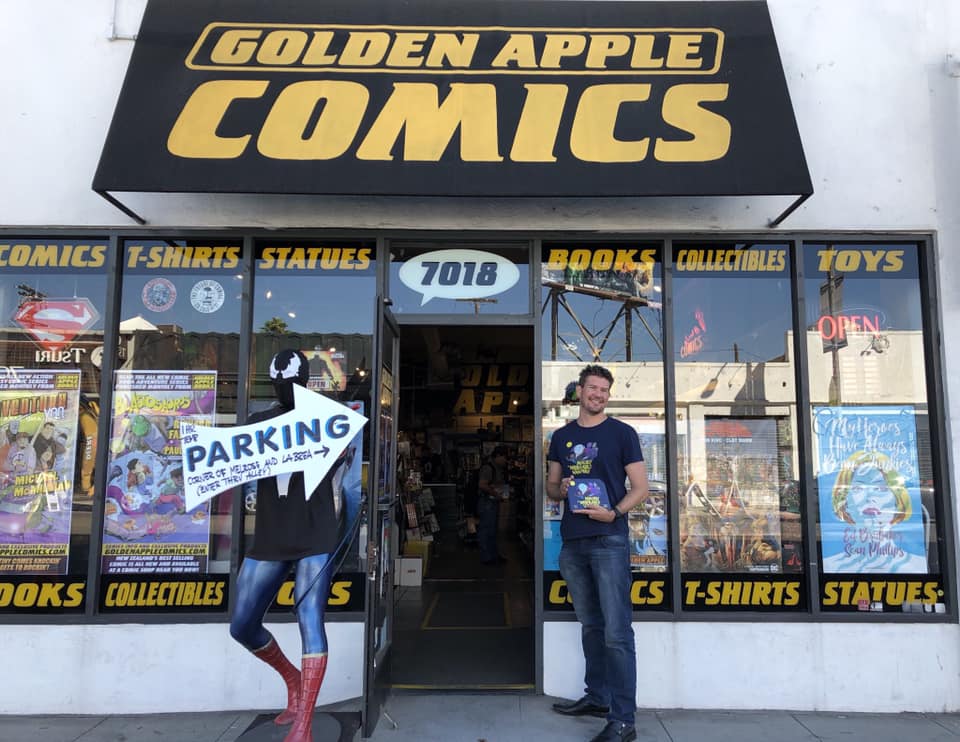 It’s what I was striving for with “Maury the Miserable Vampire”. To take a typical moody vampire and give it a transformation to the point where it begins to have fun and enjoy life again. I thought it was something that we haven’t seen much of. I kept thinking, “You’re eternal! You were probably alive when there were no telephones and now you have one where you can watch a goat singing Taylor Swift songs!”. There has to be at least some element of joy in that.

4. What are you trying to teach young people with Maury’s tale (besides to love monsters)?

Tolerance, understanding, and actually listening to others. There doesn’t seem to be a lot of that in the world lately, and I felt that those are things that needed to be addressed the most.

I always thought that it was weird, even going back to the classic Universal monster films, that the monsters hated each other. Why? They all had similar problems. Why wouldn’t they bond over that? Frankenstein’s Monster could say to The Creature From the Black Lagoon, “Nobody understands me and they won’t leave me alone.”. The Creature could reply while shaking his head, “I hear ya, man.”, and they skulk into the night to go out for nachos.

That’s why I thought it would great to have Maury meet fellow monsters from around the world and have them embrace him as a new, exciting friend because he was different and wasn’t aware of their cultures. 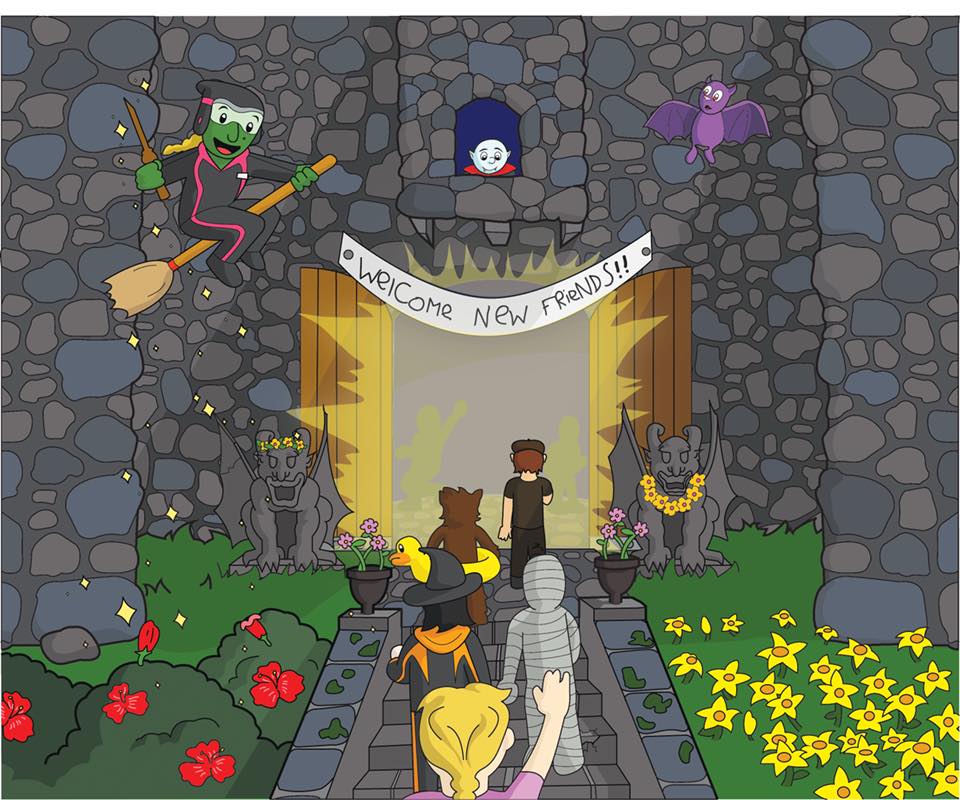 I’ve been a huge Romero fan since I was kid and loved how each “…of the Dead” films, and even throwing the “The Crazies” in there, was about something more than zombies/diseased maniacs. I don’t need to pontificate that all of those films were incredibly entertaining on the surface but had subtext to them that was almost taken in as an afterthought.

I attempted something like that with “Maury the Miserable Vampire” and I can only hope that I did our master proud.

Being a kid’s book, a lot of the lessons are hammer to nail. But even we’ve been surprised by some of the really fun and reflective takes both kids and adults have had about Maury’s adventures, and we’re incredibly grateful for that.

5. Why do you think it’s important that kids be introduced to monsters? What is it about monsters that speaks to young people?

Monsters are imagination fuel for kids. They’re a fun way for kids to look at the world differently and maybe see some of their own thoughts and feelings through them when they might be too hard to articulate. Monsters can have people problems too. Kids get that. Sometimes more than we adults do. 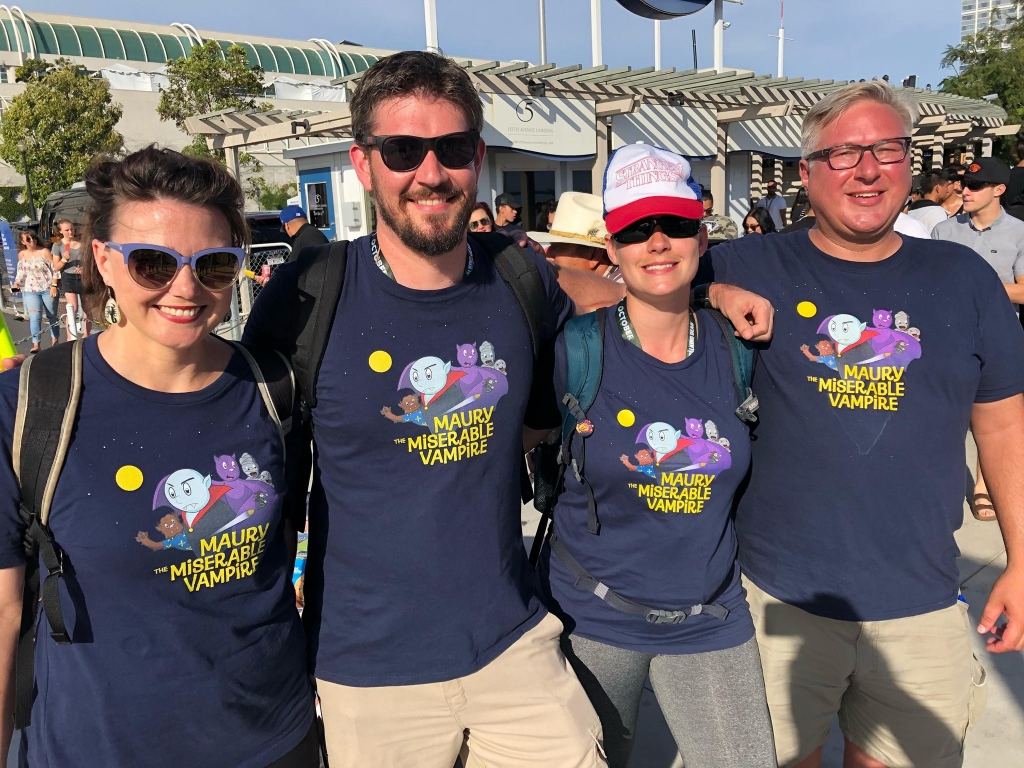 Thanks so much to Jeff Roland for the amazing interview. Be sure to pick up your copy of “Maury the Miserable Vampire” today!

All photos courtesy of The “Maury the Miserable Vampire” Facebook page