Die in the game, die in real life. “Stay Alive” proves your mother right; nothing good comes from locking yourself away and playing video games all day.

When I was skimming through looking for a movie to watch for this week’s column, the movie’s premise jumped out at me and sounded like a fun, little horror movie. About three minutes into it, I realized I had seen the movie in the theater when it first came out and promptly forgot about it. I decided to  stick with it, and I ended up enjoying it more than I expected from my vague memories.

Now, maybe, it was the setting. I work overnights, and I work alone. I watch a LOT of horror movies at night and read a lot of Stephen King. The night I watched this, I was in a different building from where I normally work, and maybe it was the unfamiliar place and the unfamiliar noises, but I found myself glancing over my shoulder quite a bit.

Stay Alive opens with Loomis (Milo Ventimiglia) playing the titular horror video game. After he dies in the game, he reaches out to his best friend Hutch (Jon Foster), inviting him over. Hutch begs off, and then Loomis ends up dying in real life exactly as he had died in the game, as do two of his other friends. At the funeral, Hutch meets Abigail (Samaire Armstrong). He also gets some of Loomis’ things, including Stay Alive, the game Loomis was playing when he died.

Back home, Hutch, joined by Abigail, his boss (Adam Goldberg), and his friends October (Sophia Bush), Phineus (Jimmi Simpson) and Swink (Frankie Muniz) decide to play the game. It’s no surprise that soon, the cast starts dying in the game and dying in real life. As their numbers begin to dwindle, Hutch must try to save his friends before it’s too late.

There’s nothing super original about Stay Alive. The game graphics are simple. The cast (though talented) is largely forgettable in stereotypical roles.

The plot attempts to combine the technology of gaming with the real life horror stories of Hungarian Countess Elizabeth Bathory. Bathory and her accomplices are believed to have killed as many as 650 young girls in Bathory’s quest to stay young. It’s a mixed bag, moving the real life events from Hungary to the New Orleans area.

What Stay Alive gets right is the direction by William Brent Bell. He is able to use the PG-13 film’s lack of gore to instead build up some ample tension as Hutch and friends try to Stay Alive. 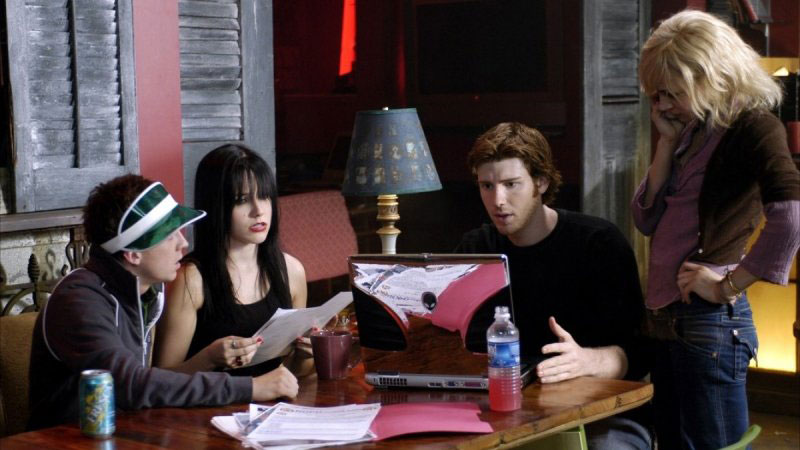 Unfortunately, the movie sets ups rules (die in the game; die in real life), but then doesn’t follow them. Characters start dying before they die in the game; the game keeps going even when no one is playing it. These inconsistencies, while keeping the plot moving, undermine the overall effectiveness of the story.

While Stay Alive isn’t going to go down in the history books as a great horror film, it’s worth checking out, especially if you can watch it alone in an unfamiliar place.