The Beacon of Creativity Known as Bowie

A special tribute to one of our absolute heroes, the legendary David Bowie, honoring his life and legacy.
Contributed by staff writer, Danni Darko
Art by editor-in-chief, The Angry Princess (@srgreenhaw) 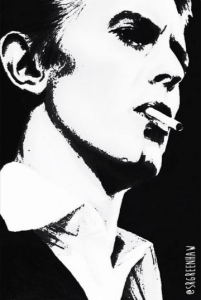 Yet again, we were all faced with the heartbreaking news that an entertainment legend had passed. On January 10, 2016, at his home in New York City, the undeniably gifted David Bowie parted ways with his earthly vessel, leaving legions of fans and friends stunned and grieving. Personally, I was speechless upon learning Bowie succumbed to his battle with cancer. I had to sit down, my legs giving way underneath me. Tears quickly began to well up in my eyes as I realized we all just very recently helped celebrate his 69th Birthday on January 8th, with his latest studio release, Blackstar. Sitting in silence for quite some time, memories I had noted in my book of memory were playing out to an emotional soundtrack courtesy of Bowie.

I’m greatly affected by the loss of a man I had never met, but who had been such an inspiration, a muse. He articulated thoughts, feelings, and fears I never had the ability to. His albums were like musical therapy to me. I was pretty young when I began listening to David Bowie, appreciating his philosophies, sense of fashion, and his outrageousness. Being an 80s baby, I missed out on the initial release of his groundbreaking conceptual rock album in 1972, Ziggy Stardust…..and the live performances accompanying this. But I was very aware of these facts, becoming a fiercely loyal subject to his music.

The songs he created offered me escape, friendship, empathy, but most of all..hope. The Brixton, London native would never learn of the significance he held within a troubled teen growing up utterly lonely and misunderstood in urban New Jersey. My Walkman would often have various tunes from the entertainer emitting from the headphones. These words, which I desperately needed to hear, would travel into my ears, soothing my heart and soul.

Bowie had numerous achievements throughout his career, and when the critics or record sales weren’t exactly stellar, it didn’t seem to phase him. He even turned down a highly coveted part as the villain in a James Bond film, later saying it was due to a very poor script. David refused to take a acting gig, or write a song which didn’t appeal to his inner divine creator and artist. The fact that it would have bolstered his acting career did not matter to him. In 2003, Bowie was offered Knighthood in the UK. When he graciously declined the offer, he relayed that he felt he didn’t do anything to deserve the opportunity. He simply does what he is driven to do. Make music. It seemed as if his concern was to find his happiness within creating a meaningful and experimental way of expression through music and eventually film. He established respect and admiration from his musical peers and fans alike. 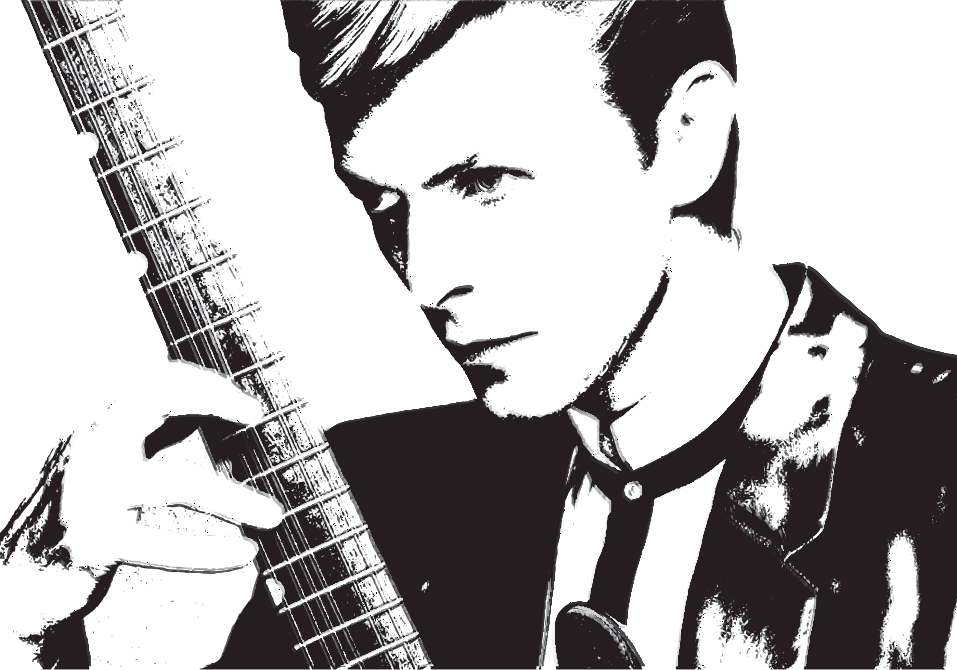 IMDb credits Bowie for 40 different acting appearances which only added to his popularity. His first acting endeavor was The Man Who Fell To Earth in 1976. Most fondly remember his portrayal of Jarreth The Goblin King in Jim Henson’s LABYRINTH which was released in 1986 unfortunately to poor Box Office sales. True to form when it comes to cult favorite films, LABYRINTH eventually became extremely popular after VHS release and people my age began having children, passing on the love for the fantasy film.

For a significant period in my life, this film was played numerous times throughout the week. This film helped ignite my passion for filmmaking and storytelling. It had it all in my opinion. Puppets and effects, incredible set designs and costumes, diverse characters and of course, Bowie. Where this movie served as a cornerstone to my love of film, to my heterosexual female companions, a goddamn sexual awakening. Perhaps this was courtesy of a few gratuitous ‘package’ shots of The Goblin King. I was partial to Ms. Connolly honestly. Bowie seemed to exude a confident strong willed, yet wounded man.

The Rock God was incredibly versatile in his acting abilities, giving Broadway a gander with his Elephant Man performance. He did earn approval from critics too in this ambitious role.

Something that appealed to me about Bowie was the fact he was so goddamn comfortable in his skin…or at least projected the idea he was. Some would mock his style, his willingness to be openly bisexual in a country where only five years earlier, it was decriminalized. His need to worry and wonder and want things to be better in the universe, to be different. He flew his freak flag very proudly, and I think in a way, was encouraging us to do the same. Your life, yourself, will never meet their true potential if constantly stifled. Bowie seemed to possess a higher knowledge of his purpose here on Earth than most. He conducted himself as a class act whose thoughtfulness and desire to connect with all walks of life shone through radiantly.

The epic performer displayed this zest for diversity and acceptance as he stepped up, openly criticizing MTV of not treating black and white artists equally, allowing fair air time of each. In a 1983 interview, David himself directed the blunt inquiry into why MTV doesn’t make the effort to integrate the musical variety on their channel. For over four minutes, the superstar held his cool demeanor and engaged in a civil debate despite the lack of social consciousness the host displayed. Ignorance-a-go-go was the theme for the music television host as he went on to explain that the mixing of black and white styles would have to be done slowly, and that MTV is a rock ‘n’ roll station and America is a rock ‘n’ roll country. The fucking look on Bowie’s face…priceless.

Maybe the interviewer should have done just a tad bit of research beforehand. David Bowie has repeatedly cited Little Richard as his first and foremost musical influence. Bowie politely finished the Q & A, the smile on his face out of frustration rather than happiness. After viewing this clip my heart swelled. I found his need to demand an answer from the network both remarkable and fascinating. He legitimately loved all facets of music, the creative process necessary and performing live. It was rumored he could play about 14 different instruments. 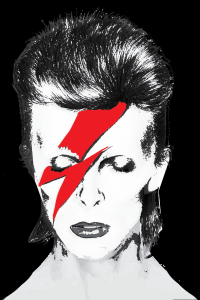 Ziggy Stardust had a rowdy substance abuse problem in the beginning of his career, lasting at least a decade. Bowie would black out, and act out of hand, never to know exactly what the hell happened the night before. He once said that he did not expect to make it beyond the age of 30. During the battle with himself and addiction, his music took on various different sounds and direction. In 1975, FAME became David’s first US #1 single. He claimed that because he was a pop star, and always received attention and choice tables at restaurants, he lacked in the ability to connect with people and communicate. I do not agree with this, thinking he was simply just very critical of himself. Bowie demanded much especially from himself.

Here in Austin, TX, there is a well known boxing gym named Lord’s. Its been here in the city for many years making formable fighters. Bowie was a massive fan of boxing believe it or not, and wished to train at the successful gym. I’ve been to this gym. It’s not fancy or in a ritzy part of town, doesn’t have state of the art equipment. Shit, I’m not sure if it even has A/C. But what it does boast are coaches and trainers that live and breathe the sport and can produce champions.

Bowie was described as a hard worker, willing to take redirection and advice. An unlikely friendship eventually evolved between Bowie and trainer Richard Lord — one which lasted for over 40 years. Lord, your atypical old school tough guy fighter, spoke kindly about his former athlete. Lord shared that whenever Bowie was in town, he would usually invite him to dinner and reserve seats for the gym owner to enjoy the performance. He has photographs depicting Bowie during rigorous training and ring sessions. Candid pictures of the star taking tutelage, hitting the bag, and my favorite….him looking very displeased as he’s jumping rope. This displayed to me the value he saw in personal connections throughout life, how he strived to project positive energy and the feeling of being welcomed and accepted. Bowie did not have the traditional build or other athletic abilities usually needed to become a successful professional fighter. He knew this too, but wanted to at least try, desiring the experience of training. Lord chuckles slightly when asked if the musician was a good fighter. “He got better while he was here, I’ll say that,” Richard Lord says with a warm smile.

The world lost one of its greatest innovators and collaborators with the loss of Bowie. His influence was overwhelming, contributing to the immense level of collective grief currently felt. Countless fellow musicians and actors expressed condolences, some sharing personal stories involving the singer songwriter. In the past year, an uncomfortable number of our heroes have passed on, leaving tremendous legacies and ultimately – shoes to fill. I realize the level of greatness Bowie achieved is unparalleled and rare. He was blessed with immeasurable talent. He embraced his eccentric behavior, partially the reason why he was so adored. He inadvertently became an ambassador for being true to thy self. The love, freedom and understanding one would feel listening to his creations, would make me want to shamelessly simply be me.

There’s a type of void currently in our world. It can at times be terrifying. Rampant violence, civil unrest, fear and intolerance are claiming an alarming number of victims. A renaissance within music hasn’t really happened in years, leaving me to wonder who or what will lead the next awakening? It’s up to us to find the answer. The only way to properly pay tribute to our lost icons is to carry on, using their artistic contributions as a beacon for our own aspirations. Grieving is absolutely in order, but we can’t let the bullshit from the world hinder what each of us has to offer, altering our genuine spirit.

Theres no better way to show gratitude, then to use his music and influence as a catalyst for our own rebirth. I hope you’ll join me.