With a major plot point that hinges on negative stereotypes about bisexuality, “DARK BEACON” reflects a lack of understanding when telling queer stories. 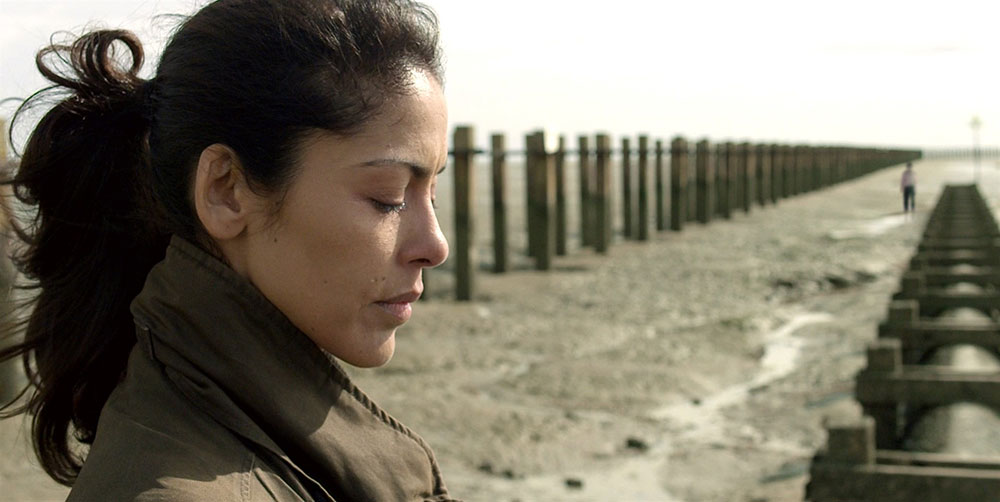 Historically, most depictions of queer women in film have been the creations of straight men. It’s a deeply nuanced subject that must take into account historical context, the intentions of the creators, and the real world connotations of what is ultimately depicted on screen. Sometimes it turns out pretty good.

But sometimes you watch a movie and you can just tell that it was made by straight dudes who don’t know jack shit about lesbians.

One such movie is Dark Beacon, directed by Coz Greenop, who came up with the original story and co-wrote the screenplay with his collaborator Lee Apsey. After watching the movie, I felt like Greenop probably once had a girlfriend who left him for a woman, and Dark Beacon is his emotional response/revenge fantasy.

The film follows Amy (April Pearson) as she tracks down her former flame Beth (Lynne Anne Rodgers) to an isolated lighthouse, where Beth has been living with her daughter Maya for months. Both Beth and Maya are reeling from a traumatic event, and it has put a strain on their relationship. Amy wants to help, but it soon becomes clear that something is very wrong, and she may have to save Maya from her mother if she can’t save Beth from the ghosts of her past — or herself.

At the London premiere of Dark Beacon, Greenop said that he “didn’t really look at the gender” of the lead roles for the film.

He stated those roles are both women only because of the chemistry Pearson and Rodgers displayed during auditions. He suggested the film could just have easily been about a relationship between a man and a woman, or between two men had the right actors come along, and that he wouldn’t have made any changes to the story or character dynamics — because “love is love.”

That’s a nice sentiment. And in a perfect world, maybe straight relationships and queer relationships could be so easily interchangeable in pre-existing narratives.

But that’s not always the case, and it’s a testament to Greenop’s straight dude blinders that he fails to recognize that. I’m not saying he’s a bad guy or that he isn’t earnest in his attempt to tell a meaningful story that isn’t defined by the gender of his characters. I’m just saying he clearly doesn’t get that his story would read very differently if it were about a heterosexual couple.

The most glaring element in Dark Beacon is Beth, a bisexual woman whose habitual infidelity ultimately leads to her death.

The characters, relationships, and backstories are all drawn fairly thin, and that simplicity doesn’t really help matters when it comes to the broader dialogue about bisexuality.

Beth was married to Christian; we don’t know much about their marriage except that Beth was frequently unfaithful. Whether her on-again-off-again relationship with Amy was her only infidelity or not is unclear.  But she apparently maintained a cycle of cheating, getting caught, begging forgiveness and promising that it will never happen again. And then it does happen again.

Christian endured his wife’s infidelity until he couldn’t anymore, confronting her and accusing her of being “mean, narcissistic,” and “not a good person.” Beth’s pleas for “one more chance” come off as hollow; she doesn’t seem to feel any genuine remorse, and you get the impression that, had she been given the chance, she probably would have just kept on doing what she was doing.

But she doesn’t get the chance, because Christian hurls both Beth and himself off a cliff. Beth survives; Christian doesn’t.

So, before moving on, let’s recap: a bisexual woman is incapable of being faithful to her husband because she also likes women, and she doesn’t give a flying fuck about her husband’s feelings because bisexual people (women, especially) are inherently heartless and driven only by their carnal desires. That’s the underlying current here.

Before you accuse me of reading too much into it, let’s imagine for a second that Beth and Christian’s roles were reversed.

Christian screws another woman while long-suffering Beth endures it until she reaches her breaking point. Sure, a Twitter MRA or two might cry that this propagates a negative stereotype about men, but it’s not actually a big deal. It’s just a plot in a movie, and everyone can cheer when the narrative punishes Christian for treating the women in his life like objects.

But if you don’t think the negative connotations surrounding Beth reflect real world ideas about bisexual people, you probably haven’t spent much time in queer spaces (re: you’re probably straight).

The idea that bi people are incapable of monogamy because they are attracted to people of more than one gender is prevalent among both straight and gay people. Many lesbians are openly prejudiced against bi women because they think they will “always go back to men.” That Beth apparently intended to keep up her affair with Amy without sacrificing her marriage to Christian posits her squarely in the “greedy” bisexual category.

And if Dark Beacon had ended differently — if Amy had convinced Beth that she didn’t deserve what Christian did to her regardless of whatever choices she made in the past — and if they had taken Maya away from the lighthouse so the three of them could heal as a family — then there could have a bit of restorative justice.

Instead, the narrative punishes Beth for her infidelity.

When Amy finds her, Beth is in the throws of alcoholism and teetering on the edge of sanity. She is often unpredictable and violent. She is wallowing in her guilt over Christian’s death by living in his lighthouse, surrounding herself with this memory until she becomes convinced that his ghost is haunting her. She tells Amy, “what we did was wrong, and now we’re being punished for it.” But it soon becomes clear that the real threat to Beth’s family is Beth herself.

She attacks her daughter and drowns while chasing Amy and Maya as they flee from the lighthouse. Whether it’s Christian’s ghost or her own self-loathing that turns Beth into a monster is open to interpretation — and ultimately irrelevant.

Either way, she pays for her supposed indiscretions with her life.

Coz Greenop has said that Dark Beacon got some “backlash” from American critics who took issue with straight men trying to tell a story about queer women.

I don’t want to bash independent films or filmmakers, but I also don’t think that their indie status should exempt them from criticism, especially when these films feature themes that carry real world implications.

It’s 2020; queer people are creating our own narratives based on our own experiences and desires. We — and people who consider themselves our “allies” — should be amplifying those stories.

Greenop may have had good intentions with his “gender blind” casting, but it’s clear that he doesn’t understand the nuances involved in portraying queerness.