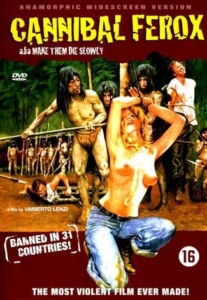 Synopsis: A woman writing her thesis, along with her brother and friend are making their way into the Amazon to find evidence that cannibalism has never existed. After their vehicle breaks down, they are forced to continue on foot and meet two unsavory characters that haven’t made the best impression on the locals.

As I was watching the story in Cannibal Ferox unfold, I realized that it is extremely similar to Cannibal Holocaust. It was released a year after Deodaro’s infamous exploitation film, and you can’t help but feel that director Umberto Lenzi set about making a film purely to make money off the popular cannibal genre. It’s lazy storytelling at its best. In Cannibal Ferox, we follow three characters – Gloria, Rudy & Pat – into the Amazon where they come across Mike & Joe. Mike spins a tale that the native man-eating tribe killed their friend, and they managed to escape. But the story doesn’t quite sit right. The trio come across this tribe and are met with fear, much like in Cannibal Holocaust with Professor Monroe and the rescue crew. What Mike & Joe really did is went into the tribe with guns blazing, trampling the jungle with their big white man shoes and killing off several natives in their search for emeralds. The storyline of obnoxious people going into the jungle to exploit a tribe has already been told in Cannibal Holocaust, and I didn’t really want to see it again. 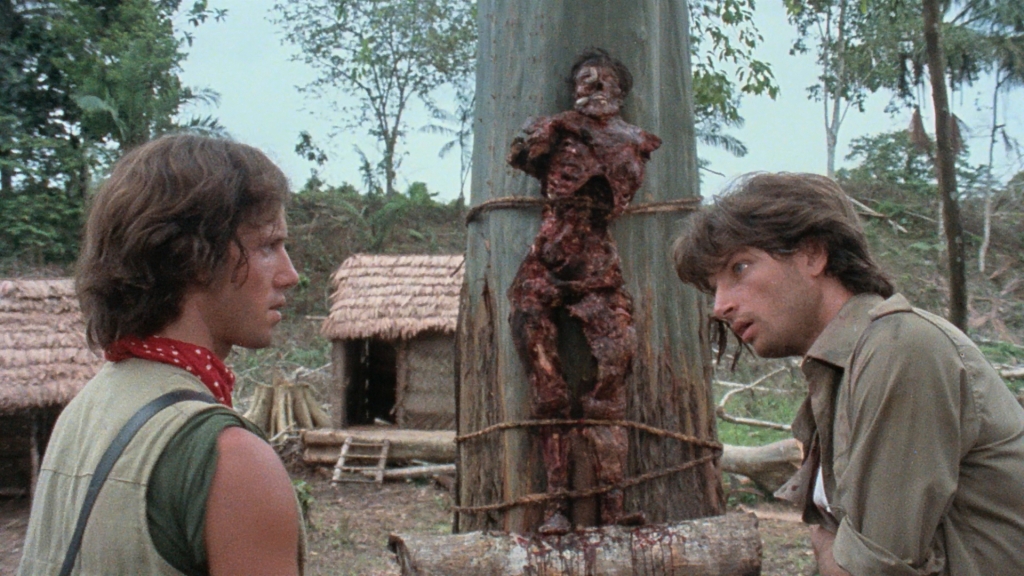 This film has a lot of animal cruelty and gore, most notably the scene where Pat is hung by hooks that have been put through her breasts and Mike has his genitals cut off. When it came to Mike having his meat and two veg chopped off, I really wasn’t too bothered as he’s an extremely unlikeable character and off his head on cocaine for all of the film. There’s plenty of animal cruelty – a turtle is killed (remind you of another film?), as well as a monkey and a pig (this butchering scene goes on for far too long). There is also the scene where a coati is killed by an anaconda and again, it is on the screen for just too long. You have to questions Lenzi’s reasons behind the extended screen time that these killings get. It appears that it’s just to make the film seem THE nastiest and THE goriest.

The soundtrack is decent, and it does the job of enhancing whatever mood the viewer is supposed to be feeling at the time, whether it’s repulsion, anxiety or tension. The location is the standard Amazon jungle, which is something I’m getting used to whilst on my journey through the video nasties. The script for Ferox is terrible. The word “shitface” is used excessively at the beginning, which provides a few laugh out loud moments—so it’s not all bad! There aren’t any stand out moments from the actors apart from when Rudy is attacked by piranhas, which I thought was an interesting thing to see. Including piranhas in his film was something that Deodaro missed out on because they didn’t behave the way he wanted them to (well what did you expect, they’re piranhas you silly man). 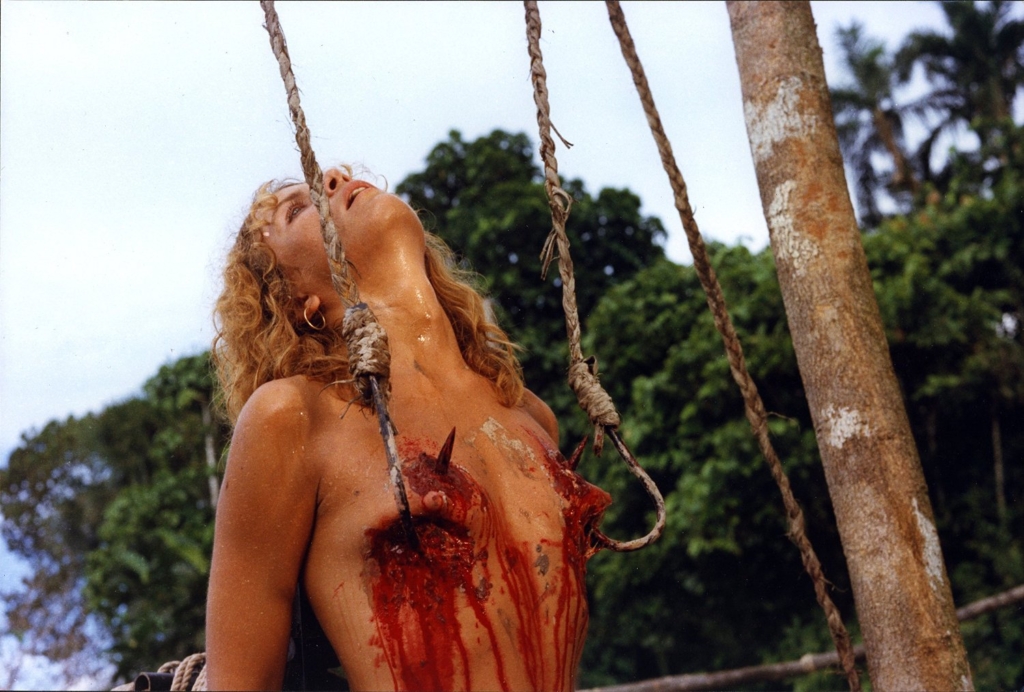 If you enjoy cannibal films, then you should give this one a watch. But, if that’s not really your thing, then it’s one that you can easily bypass without missing out on much. I’d highly recommend watching Cannibal Holocaust instead. This film certainly satisfied the home video viewers that wanted to see the most shocking and gore-tastic films at the time, but I don’t feel that the film had any heart to it… and that is something that I look for in any film that I watch.