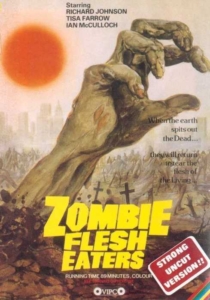 Synopsis: A boat drifts into the New York harbor, and when it’s boarded it is found to be empty apart from a zombie. Where is the crew? The boat’s owner daughter and a journalist head to the island where the boat came from to find out what happened. There’s some bad voodoo afoot on the island of Matul, and those damn dead people just keep coming back to life!  Get ready for blood, guts, eye gouging and shark fighting in this Fulci classic.

Killer Line: The boat can leave now. Tell the crew.

In 1979, Lucio Fulci decided to make a loose sequel to Dawn of the Dead (which was released as Zombi in Italy), hence the reason that this has the alternate name Zombi 2 (released as Zombie in North America). In Italy, the copyright law allows you to market a film as the sequel to any other, and this is why we have the title Zombi 2! There really aren’t any similarities between the two films apart from the zombies and nothing to link them as sequels. What we have here is pure exploitation cinema.

This really is a classic in the zombie genre and has some of the best zombie effects that I’ve seen. The undead vary from looking extremely dead and rot-tastic, to only slightly tinged with face paint, which we also see in Dawn of the Dead. The gore is pouring out of every orifice here, and it’s pretty easy to see why it was classified as a video nasty. The guy on special effects is Gino De Rossi. He’s created a slow, lumbering zombie that terrifies because no matter how slow they shuffle along and how fast the victim runs, that zombie will still get ya!

One of the real standout moments in this film is zombie vs shark. The viewer is treated to the sight of an underwater zombie actually attack a shark. Now make no mistake, this shark was real. Moments before, one of the film’s actresses is swimming around with the shark and nearly killed by the same zombie. Only the master of gore could endanger his cast in such a way. There is a second infamous moment when Mrs. Menard’s eye is impaled on a piece of wood. It’s a disgusting sight but fabulous at the same time, and this film doesn’t fail in the inventive way that it kills off the characters. The soundtrack for Zombie Flesh Eaters is effective and works well to enhance the mood and the tension. There is even some funky Caribbean music in there which gets the viewer all mixed up and lulled into a sense of false security.

The storyline and characters are fairly basic, and there’s no over complication of the films components. All you need to know is that the characters are going to an island to find Tisa Farrow’s father and they find it overrun with zombies, which have apparently been caused by voodoo. There isn’t a scientific background to baffle you and, as always, simplicity is key. The location of the film is nice, reminiscent of cannibal films with its jungle/island setting, increasing the sense of hopelessness that the characters feel throughout. Zombie Flesh Eaters is a dubbed film as was common at the time. There are many examples of dubbing gone wrong, but I don’t find it to be irritable here. It’s just what you expect from an Italian director.

All in all you’ve got a solid horror film here. It is a must watch if you’re a fan of horror, and in particular zombie horror films. The current release is uncut. Back in the video nasty heyday it was prosecuted for obscenity, with cuts being made in particular to the eye gouging scene. The Arrow DVD release in particular brings this film to life, and it has been beautifully restored . It’s definitely one for the collection. I heartily recommend you get your DVD player fired up to watch it.